Your Stories Deserve to Be Told – if Not for You, for the 10-Year-Old Muslim Girls

by Sara Alfageeh in Identity on 26th February, 2019 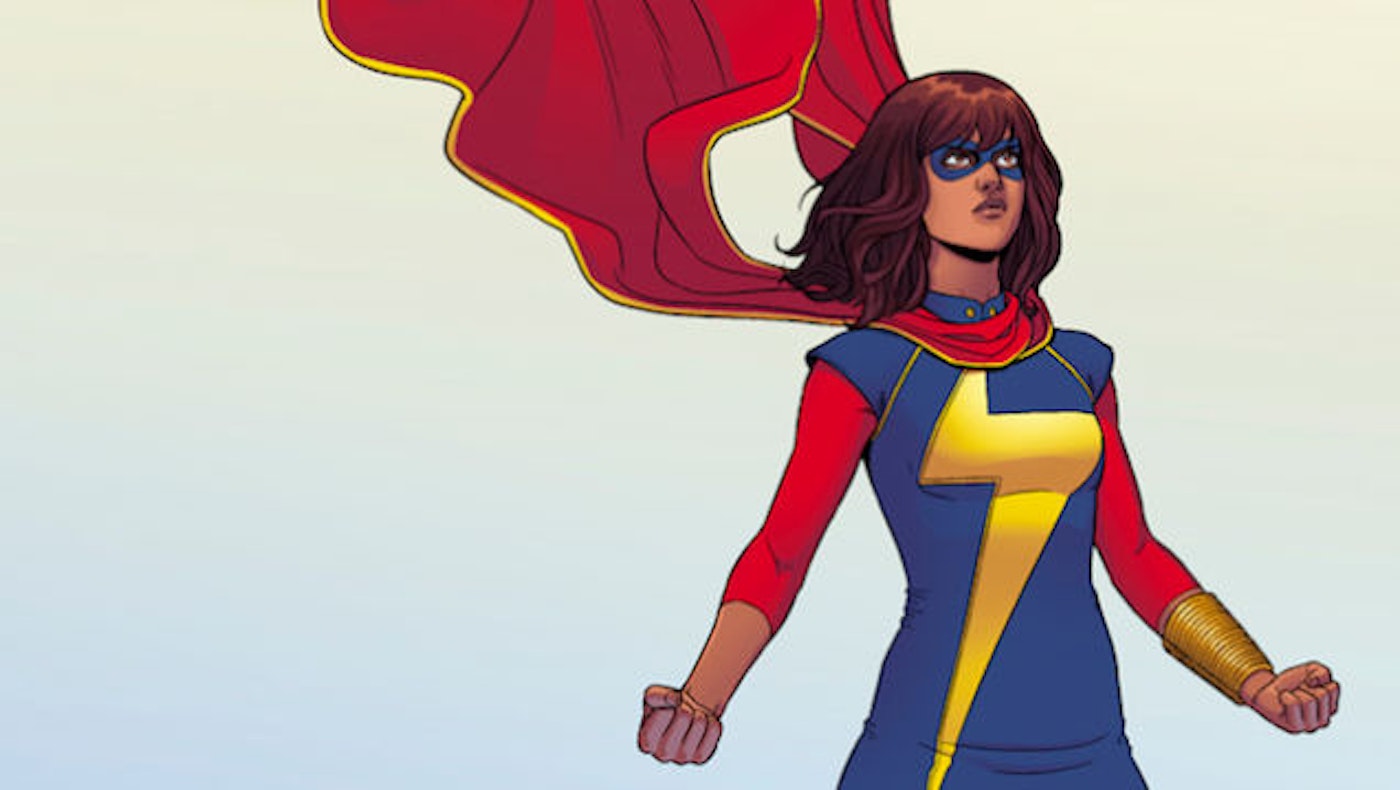 Storytelling is everywhere and in everything, down to the most basic interactions people have. They help us understand ourselves, our values as individuals, as well as the cultures that influence us. In our current age of massive entertainment industries, social media and instant visual communication, many have become more aware of whose stories are being told. Who, as the audience, are we being asked to relate and empathize with? Who are telling these stories? To explore these questions, I’m looking at one of the best methods of storytelling there is: comics.

I’ve always loved visual storytelling, and it’s this love that became my career as an illustrator and a cartoonist. I spent much time trying to answer these questions of representation on my own as a reader, but more so now that I’m responsible for sharing my own stories.

Long before I was drawing, I was spending my childhood running back and forth to the store for volumes of Justice League, issues of Batman, Wonder Woman, Avengers, and all the X-Men I could get. I would sit cross-legged on the floor of the graphic novel section and just burn through stacks of comics taller than me every week. This was also during the early 2000s, when the Saturday morning cartoon blocks were back-to-back shows like “Justice league,” “Static Shock” and “Batman Beyond.” I couldn’t get enough.

Although I was too young to understand it as a kid, I was pretty excluded from these same stories I loved. Storytelling is important because it’s how we empower and validate ourselves. Classic superhero stories are told with universal themes like “Good will always defeat Evil” and “The strong have a responsibility to defend the weak.” Those are themes anyone can relate to, but it’s how we’ve been representing those stories for decades in Western media that is the problem. What is the effect when the figure of “good” is always a physically impressive white man who is above the normal law enforcement, or the figure for “weak” is a woman, or “evil” happens to always be a conniving foreigner? What happens to those in the audience who accept that they do not belong to the mainstream narrative and are not welcome to it? What other narratives are they forced to seek out instead?

I stress the importance of being able to visually identify with a protagonist you’re supposed to be rooting for. All young children need to be able to flip through a book, channel surf or see and a movie trailer and, at some point, say, “Hey, they look like me.”

This smaller nerd grew up to be a bigger nerd. If you don’t believe me, these are some of my recent costumes after nine years of attending anime and comic cons.

I unconsciously was personally trying to fill the gaps in my favorite media. I was part of the audience, realized that I was just going to be the representation I didn’t see, and finally ended up on the other end as an illustrator and creator. It’s like a geeky butterfly transformation.

So clearly, I was very much into it, but what do a bunch of men in spandex have to do with anything?

1) Comics are examples of literary storytelling, unique from books and other media because the writing is minimal and mostly consists of dialogue. It creates a more interpersonal interaction with what’s happening on the page.

2) The literary aspect works together with visual storytelling, where we’re connecting to colors and lines, and can dictate how to represent our world.

3) Comics influence pop culture, with our world growing closer together due to mass communication technology. Names like Superman and Spiderman are known in households on every continent

4) Comics are the source for cinematic storytelling, a multi-billion-dollar entertainment industry spread across movies, shows, games, toys, clothes and more.

People love stories, always have and always will. It’s how we validate our experiences in the world and learn about what we have yet to experience. It may seem like a simple concept, but we often forget that the type of stories being told is as important as who’s telling them. As a kid, I wanted to read comics. As an enthusiastic fan, I wanted to know who else was out there reading comics too. Now, I want to know who is behind them.

When I first started making my own art, I wanted to distance myself from creating anything about Muslim women. As a visibly Muslim woman myself, a hijabi, I believed others expected me to make my work about my identity anyways, and I found that concept incredibly frustrating and limiting. I knew that for many, my hijab, my head scarf, reduced me to a caricature of half-truths and stereotypes, and that there were people who decided how they wanted to act around me before I even interacted with them. Instead of challenging that with my own stories, I convinced myself that working without my identity was somehow more professional.

A few years later, I can easily say that this mindset was very toxic for me, and one of the key ways I broke out of it was by looking at the history of comics. What’s different in mainstream comics is that power-fantasies are these literal tropes, and you can see that some of the most iconic characters in pop culture were the power fantasies of the authors.

Jerry Seigal and Joe Schuster in 1938 published Superman in Action Comics. Two poor, Jewish men would end up making one of the most internationally recognized fictional characters, with a face and story still known over 70 years later. Superman was the extension of those wishing to escape the reality of depression-era United States.

Joe Simon and Jack Kirby made Captain America in 1941 as a fictional response to World War II. Again, it was poor, Jewish men making a timeless icon. They couldn’t punch Hitler, but Captain America could. Simon and Kirby were making unapologetic, strong political and social stances, considering the issue dropped before the U.S. entered World War II.

Luke Cage was the first Black title character created by Archie Goodwin and John Romita Sr. Issue #1 of “Hero for Hire” appeared in summer of 1972, where he had distinctly unbreakable, bulletproof skin, which was no coincidence after the height of the civil rights movement.

Men had been using comics to explore their power-fantasies for over 70 years and created an entire industry out of it. In the pages of comics, these protagonists were morally good and stood up for what they believed in; they were physically ideal, their enemies were easy to spot and undeniably evil, and at the end of day, they got the girl. There was nothing a man couldn’t do. (A woman on the other hand? That was a little trickier.)

Fast forward to 2014. The comic Ms. Marvel by G. Willow Wilson and Sanaa Amanat hit the market, and it was like nothing I had ever seen before. I had no idea how starved I was for anything even remotely close to this. Here’s Kamala Khan. She’s a Pakistani-American teenage superhero with the powers of shapeshifting, who happened to be Muslim (and I use the phrase “happens to be” very deliberately). She’s this wonderfully funny, stubborn, passionate, multi-dimensional character. When they discuss her identity, it is just part of a much larger story, which is to say Kamala Khan is written to be a person, not as a diversity box for the publishers to check off.

A comic written by Muslim women is the top-selling comic at Marvel, one of the two biggest comic publishers of all time.

The first issue has so far been reprinted seven times and topped digital sales too. At one point, issue #1 was the most downloaded digital single issue at Marvel. I had never experienced anything like that before — being able to see a character I identified with accepted into the mainstream like that — and to be honest, I never expected myself to. That’s what happens when you grow up never being allowed to be the hero.

I used to want to distance myself from my identity in my artwork because I convinced myself it was all people expected me to be good for. In reality, it was because I had never witnessed successful positive representation. As a woman, I was told not to take up space. As a Muslim in the U.S., I was told not to attract further attention to myself.

Ms. Marvel changed that for me.

I only wish that I could have seen Kamala Khan as a kid, but what’s more important is that she and other protagonists are here for young girls now. The stories are changing as there are new authors and new audiences who are seeking out the narratives that haven’t been given their chance yet. Social media, streaming sites like YouTube, and online crowd funding have put the power into the hands of individual creators, and have forever changed the landscape of how we can access stories. How do you prove you are a part of a culture unless you’re contributing to it?

Please make your art, because your stories deserve to be told — if not for you, for the 10-year-old girl sitting cross legged on the floor of a library. She had a stack of X-Men comics taller than her, but never thought she could see herself as one of them.

Sara Alfageeh is a Jordanian-American illustrator passionate about nuances in visual storytelling, teaching, and diverse representation in media. Sara is Boston-based, with a BFA in Illustration from Lesley University College of Art and Design.