The Elegant Art of Aerial Silk Acrobatics Changed My Life 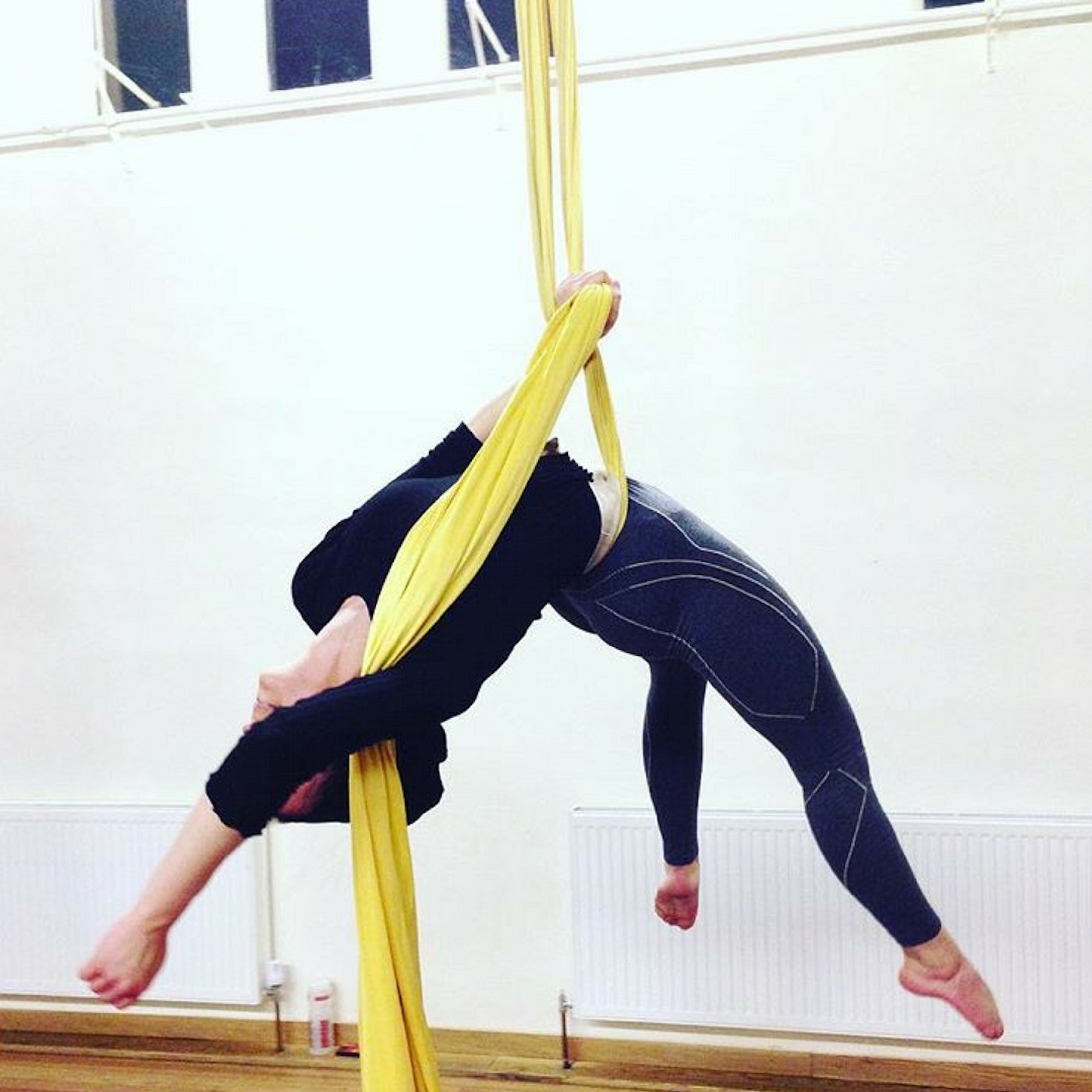 Aerial acrobatics started purely as a gymnastic movement art form. Today it is associated with circus performances mostly due to the influence of Cirque du Soleil. André Simard who joined Cirque du Soleil in the 20th century who invented new theatrical aerial expressions to impress spectators became the founder of Aerial Silks. However, aerial acrobatics is the common term that comprises of the range of performances that use different hanging equipment such as ropes, fabrics, hoops and horizontal bars.

The genre that appeals mostly to me is aerial Silk. Unlike the other equipment, Silks is softer on the body and to me, it expresses a greater variety of movement. It is used for climbing, wrapping, suspending, falling, swinging and spiralling the body into and out of various positions and poses. Although that sounds fun, it is also intimidating because it is done without any safety lines even for beginners.

How I got into it

Although I have had an interest in performance arts since childhood through figure skating and dance, my interest in Silks did not surface until I got a knee injury. Besides the pain, I was unable to walk properly and could only move short distances with crutches before becoming too tired. I had never experienced the frustration of not being able to move, to have an abundance of energy that I could not release and to persevere through the disappointment of putting ambitions that any young adult may have on hold.

It was frightening to not know how long the recovery would take, or if I would attain a full recovery at all. Perhaps out of desperation, I became occupied with doing home treatments, physical therapy and body weight training.

Although I had healed rather successfully after a few months, I had developed a habit of searching for new ways to challenge my body. I had never been more eager to get out of my house and become more active, but I was concerned about finding a sport that would put my recovery at risk.

A regular gym membership seemed unsuitable because of the type of the nature of the heavyweight or high-impact workout it offered. Instead, I began searching for an alternative gym. A close friend of mine who trained in trapeze suggested I look into Silks. Although I hesitated towards the risks it involved, it intrigued me greatly. I was fascinated by the pure strength, technique, endurance, balance and good memory it required. After being homebound for so long, I sensed the need to feel alive, feel feminine again and maintain the physical transformation I had started.

In January 2017, I joined aerial fitness at Flying Fantastics in London without realising what impact Silks would have on me as a person and on my life.

My quick progress surprised me the most. After five month’s training, I moved into the advanced group where I was taught intricate drops, sequences and transitions. Seeing others succeed in something I found incredibly difficult was fascinating and inspiring. It kept motivating me to continue even when I moved to Sweden last year for my master studies. Luckily, I found a venue with the necessary equipment but without any instructors. If I wanted to continue doing Silks, I had no choice but to turn to online content and tutorials to direct my own development. It did not take long before others with similar interests joined my training and soon after, I was asked to give instructions and demonstrations. I never imagined I would find myself in the position of becoming an unofficial instructor, but feel privileged to see others improve and being part of their progress. 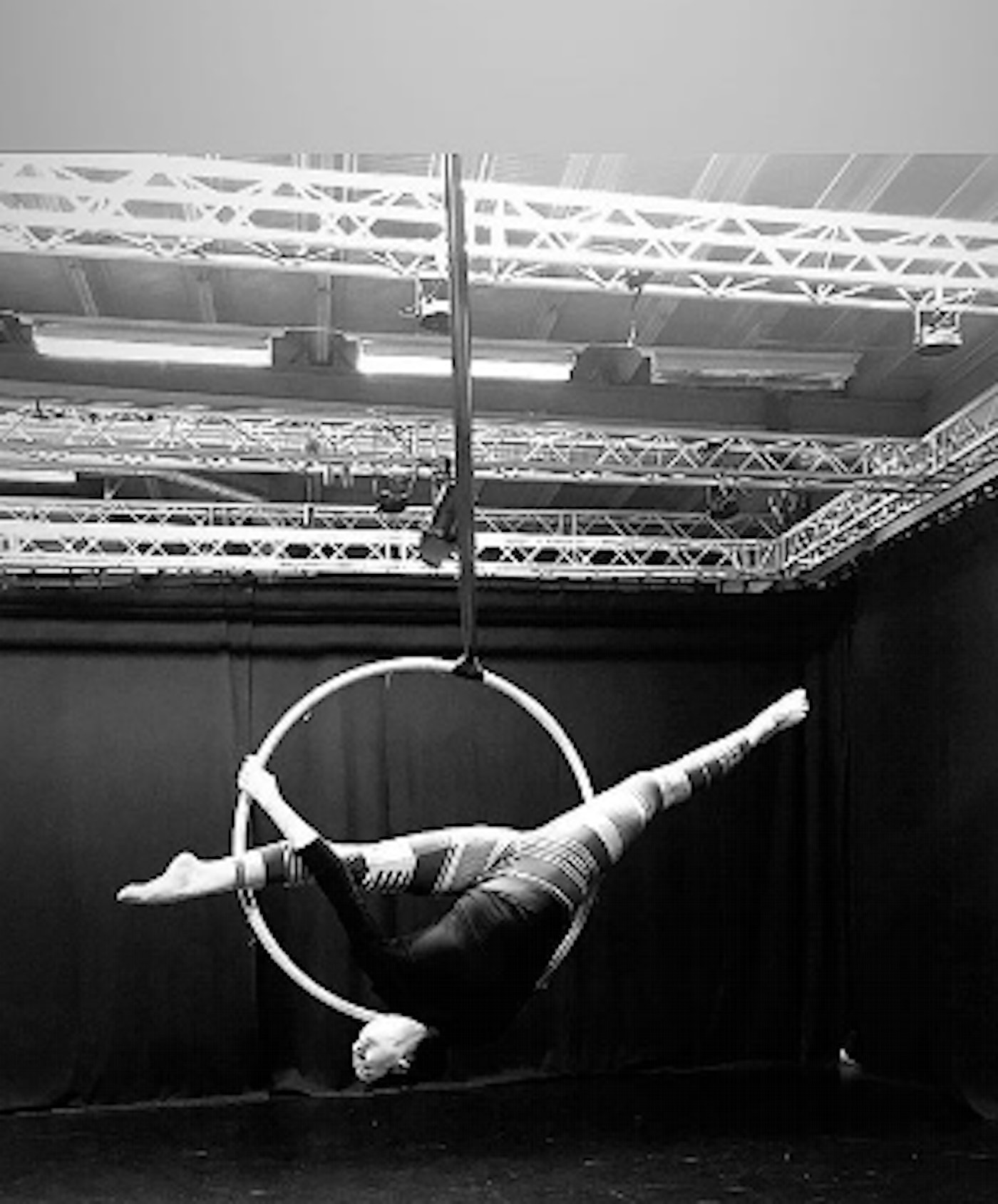 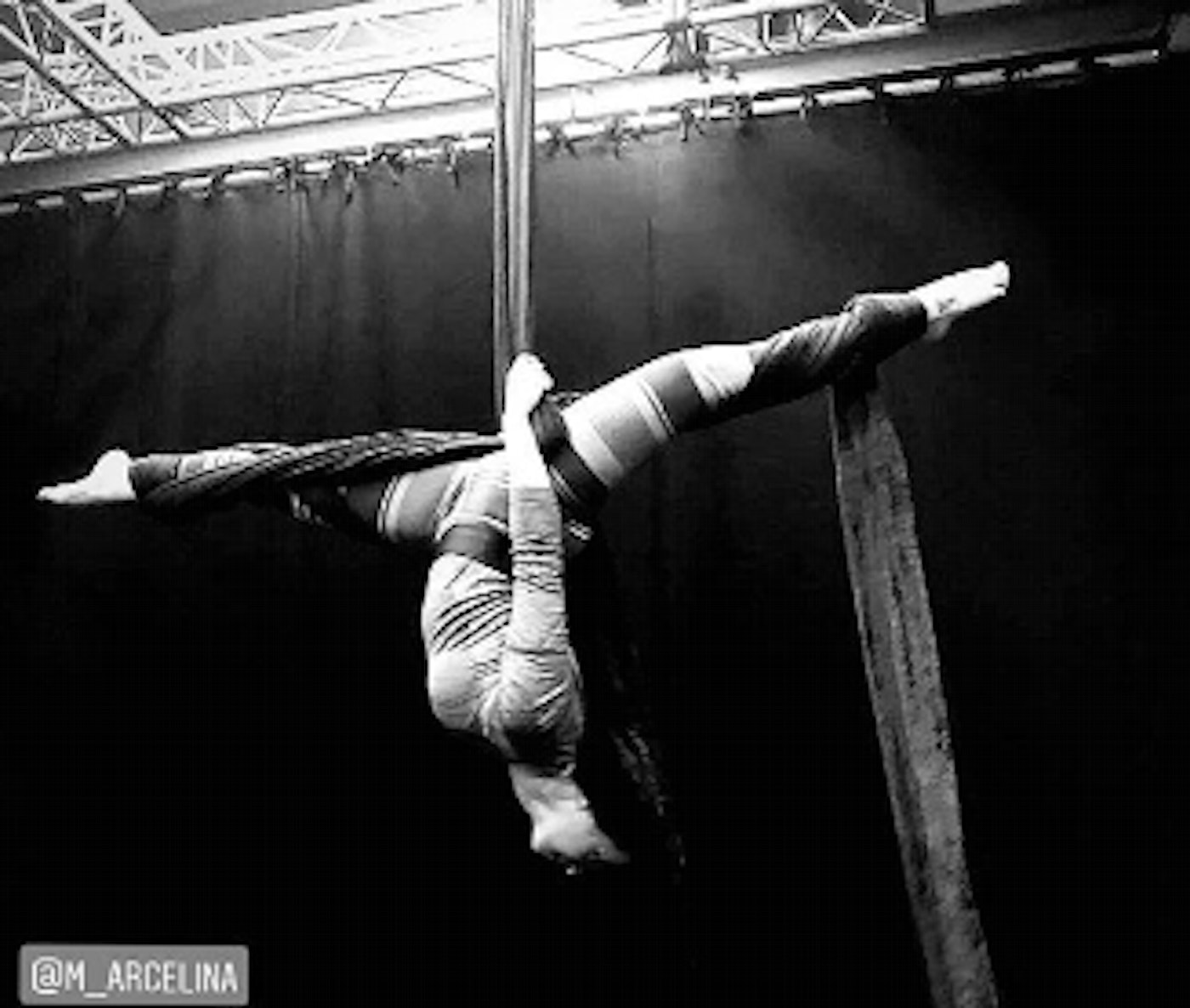 How it makes me feel

My first aerial sessions were brutal on my body. Every part of me was aching. Bruised limbs became a normality and my hands got their fair share of a beating, either from fabric burns or blisters. Deep muscle tenderness lasted for days and would make even the most futile tasks such as brushing teeth become a struggle. Perhaps it is strange to say that I liked to feel these sensations because it reminded me of my efforts and the struggles I overcame during my injury.

What added to that experience was seeing my body change. Muscles began to appear where they had never appeared before. It was as if I was moulding myself into a new woman – body and mind. My energy levels were at an ultimate high, my metabolism improved and I got undisturbed sleep on a daily basis. Silks had become my means for self-discovery and with that, I felt immense gratification.

If they can do it, so can I

What usually prevent progress is insecure self-talk or doubts. Even though they are part of human nature, they can have a hindering effect on our ambitions. Of course, there were moments I felt training became too difficult whereby I questioned my abilities. In other moments, fear kicked in. It was clear from the beginning that aerial acrobatics come with risks so it was natural to feel worried about the danger of falling or attaining more injuries. I am normally not afraid of heights, but letting go before an eight-meter drop still gave me an adrenaline rush that made my heart pound and hands shake. It made me reflect on the difference between natural doubts that are willingly challenged and false confinements we put around our abilities out of fear. I became more aware of the difference every time I proved my insecurities wrong or went against a fear and that nurtured mental strength. In reality, we might not know what we are actually capable of and that was a stimulating mindset. My silent mantra is “If they can do it, so can I”. As my confidence grew, the better I could control internal discouragements. Looking back to the shy and timid person I used to be, I am grateful to the impact Silks has had on my personality and how it made me feel more expressive, empowering and daring. 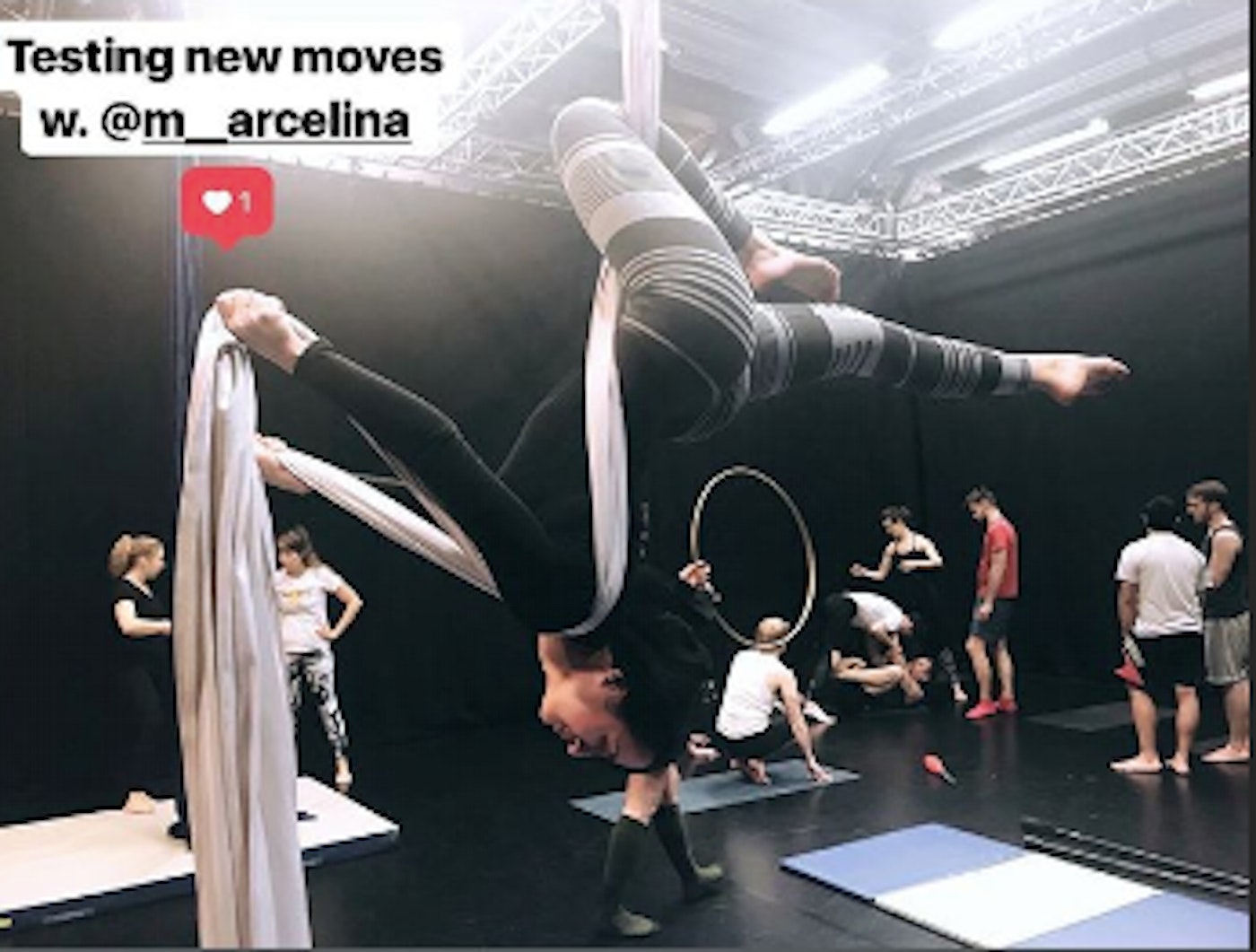 As a committed Muslim woman who chose to become veiled at the age of 19, I was also confronted with a personal reinvention. During training, I step out of my comfort zone regarding dress code for safety but apply alternative solutions to remain covered. As I began to share my progress more openly, I was amazed by the enthusiasm I received from Muslims and non-Muslims alike. On occasion, I have been told that I help to break Muslim women’s stereotype. It sparked dialogues that diverted from “right or wrong” and shifted towards conversations about Muslim women’s passions, ambitions and athleticism and their rights to pursue them.

It was not a surprise that many Muslims also express their dislike towards me doing aerial acrobatics. Comments related to clothing, physical exposure and purpose were recurring subjects. As it is in most cases, lack of understanding or prejudice makes matters easy to judge.

As a mixed-race woman, I had spent many years searching for acceptance and personal belonging prior to doing acrobatics. Although people feel reassured to pigeonhole others, I felt comfortable in the unconventional. Ultimately, that is how I would identify myself and my interests.

As long as my decisions are informed and conscious, I have no reason to be intimidated by people’s opinions. Diversity even in conversation with other Muslims are enriching and can break down our own internal stereotypes. I feel proud to portray myself as half Swedish, half Iraqi, an architect by education and profession, a practising Muslim and an Aerial Acrobat all at once.

How to get involved

Aerial acrobatics is unique in its own right but is even rarer amongst Muslims. Perhaps some feel hesitations, others may not realise aerial acrobatics as being a possibility or it may even be difficult to get access to. If you are in luck, there may be aerial establishments that offer classes close by. Alternatively, there are independent organisations that may provide circus training. This year, the world’s first-ever comprehensive online aerial silks course launched to help beginners to advanced trainees develop their aerial skills. Wherever you are or what your fitness background is, there are hopefully various opportunities to join or independently embark on your own journey in aerial acrobatics. As my family usually says: “seekers find”.

Nadja is an Iraqi Swedish Muslim aerial acrobat, with a background and interest in architecture. Follow her journey on Instagram @j_nadja