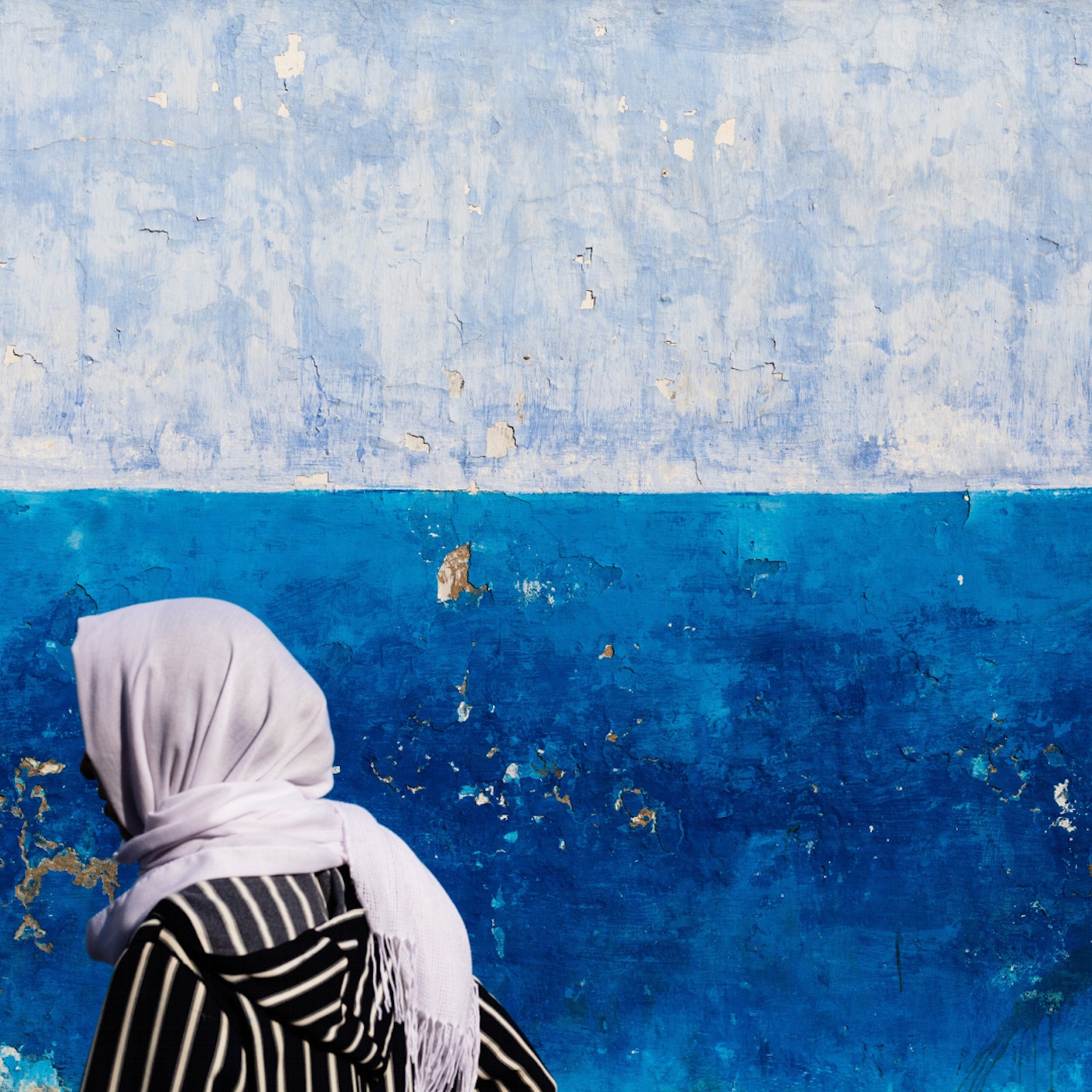 This article was published in 2018 by Amaliah

“Representation matters” is the maxim of our time, but what does this mean for veiled Muslim women when the beauty industry is dominating the visual narrative? There are three seminal moments in my own personal relationship with the hijaab where I’ve had to confront this issue, hijaab-on.

A young girl’s journey to hijab

The year is 2001, in a pre-9-11 world, and during the heady days of British springtime I lay in bed and made a commitment to begin wearing the hijab. At a time when the representation of Muslim women, both domestically and internationally was quite literally non-existent, I had in me a strange feeling of dread, but equally, with no visual reference points, the intellectual luxury of being able to focus solely on what I understood to be the purpose of hijaab. To me it spoke of the larger, more universal values of Islam – to not seek social validation, to embrace a unique sense of humility and to focus on self-improvement. I was the first in my family to wear a hijab, and consequently, I had a dearth of scarves in my house from which to choose for my public debut.

The following morning, I distinctly remember opening my mum’s cupboard to unearth her neck scarf collection, and picking up the first in a pile of chiffon scarves that are forever consigned to their moment in fashion history. The unfortunate choice, in this case, was a dark blue, floral number which I tied hastily around my neck before making a speedy exit to the bus stop. The feeling that blossomed instantly in my chest as I opened the door to the world, buried any sense of insecurity I may have had, and for a moment everything felt absolutely right in my own internal world. Even the surprisingly popular and enduring question of whether it accompanied me to the shower, which I was most frequently met with, did little to unsettle me.

Fast forward to 2012 and following a hiatus from hijaab wearing I made a less spontaneous and more measured decision to reassume the hijaab on the back of an edifying Hajj trip. By this point representation of Muslim women was growing organically amongst platforms such as YouTube.

While this was no doubt a positive and inspiring movement, to see young Muslims control their image for the first time, and to propagate a more pluralistic understanding of Muslim women, I couldn’t help but worry about the normative influence of this single and very profitable understanding of hijaab that was taking root in mainstream culture and bolstered by commercial interests.

It appeared as though this formative movement did nothing to challenge the prevailing attitudes regarding women and the ideals of beauty that are so often pitted against us. Now as a professional woman, I was nonetheless acutely aware that my hijaab would have to take on a more formal appearance. Reader, I, therefore, ventured into this world of online hijaab tutorials.

If the advent of the mass disseminated image brought about with it the beauty index that overwhelmingly defines femininity today, then the birth of Instagram and the democratisation of these tools seems only to further reinforce it.

And so, the image of the woman in hijaab is engulfed in this web and redefined by it. We know that beauty ideal is less about appearance and more about prescribed behaviour –  and yet the young, pouting millennials so treasured by mainstream culture counters the reality that women are making great strides socially, professionally and economically. If beauty is the last remaining social tool to subdue women, are we as Muslim women being drawn into its grip through the beauty industry?

If we accept the premise that the beauty industry, by and large, depends on exploiting anxieties, then in Muslim women it exploits a very specific anxiety – that of being othered. Of reassuring the surveyor that their notion of femininity is shared. A persistent theme amongst the many tutorials that I endured, was an implicit message that hijaab was only acceptable when co-opted by a very western notion of femininity and seen as a symbol of assimilation rather than difference. It seemed to me as though the idea of the hijaab as antithetical to the modern, capitalist idea of femininity had been internalised by Muslim women, and we had begun to try to adapt our public image to fit in with dominant notions of beauty. Amongst all of the manuals teaching me how to camouflage my hijaab in an increasingly appearance-driven visual economy was the message that the hijaab was applauded as long as it was not too threatening to the western idea of beauty and order and when it reinforces patriarchy by appeasing the male gaze. Amidst all the intellectual discourse that was an appendix to this were reassurances that we were not all that different. The hijaab was merely an accessory, Muslim women were just as marketable and profitable as the population at large. The Muslim pound was coined.

What followed was years of me adopting visual symbols to reassure the world that, although I was Muslim, I wasn’t actually that Muslim. I had both internalised a scale of otherness and decidedly plotted myself on it. I had oriented myself outwards, towards the world, rather than upwards towards the Divine being for which I had ultimately made this very important and life-changing decision.

And finally, my third and most recent reckoning with the beauty industry, at a time when the hijaab has been fully consumed by the machine of capital, and shallowly embraced by multinational giants to bolster their profits. The moment I looked it directly in the eye and decided once and for all to give up makeup and embrace my understanding of hijaab in all its unfashionable and apparently retrograde glory. I woke up one morning and decided to retire my eyeliner and truly work on an implicit desire I had in me to be optically unchallenging to the world around me. Of all the changes I had made for the sake of my religion this was by far the most daunting and the hardest to come to grips with.

To be a naked symbol of what I understood of hijaab, to not have what had become to me to serve as a set of visual reassurances to the world at large, and to confront my deep-seated insecurities regarding my value and worth. This time I opened the door to the world with a little more trepidation but with a more decided sense of myself.

The notion that the hijaab is continually vilified in modern Britain is no longer debatable. The media’s rabid obsession with children wearing the headscarf reveals a truth held by the population at large – that the hijaab is so reviled that surely nobody could possibly choose to wear it. To be seen as marketable, and therefore visible beings are, in a way, a step forward for the Muslim community, and the symbol which has come to represent us. What we need to see more of is us redefining the terms of femininity. We have too easily succumbed to shallow notions of choice feminism and willingly submitted ourselves to the narrative that Muslim women can be ‘just as’ beautiful, fierce, ambitious and strong – what about redefining the boundaries of beautiful, fierce, ambitious and strong. If we accept that womanhood must be stretched to accommodate a range of understandings, what about the idea of a Muslim woman that isn’t so easily marketized. What about the character of modesty that includes abstinence, self-sacrifice, discipline, a search for a higher purpose – qualities that are mockingly associated with a stony-faced, puritanical tradition that has no place in the modern world. Qualities that remarkably are ungendered and universally prescribed in Islam.

I often think about that young girl in 2001 and whether she would now have the opportunity to consider the hijaab with all its theological nuances, or whether it would be drowned out by a chorus of ‘one short side, one long side..’ instructions.

While the model of representation and all the young Muslim women that had a part in shaping it has no doubt created a less hostile reception for the hijaab, and while I am sure a generation of women will be growing up with a much more positive understanding of the hijaab- we must be careful not to let a shallow interpretation of our religious heritage, often made with commercial interests at heart, dominate our view of the head covering.

What I am not saying, is that beauty and success – be it religious or socioeconomic – are mutually exclusive, rather than the vertical solidarity upon which the beauty industry rests is not the role model for social order and for Muslim and non-Muslim women alike we need to look further than the idea of femininity as dominant forms of beauty.