The De Young Museum Exhibition: Have We Commodified the Spiritual Realm? 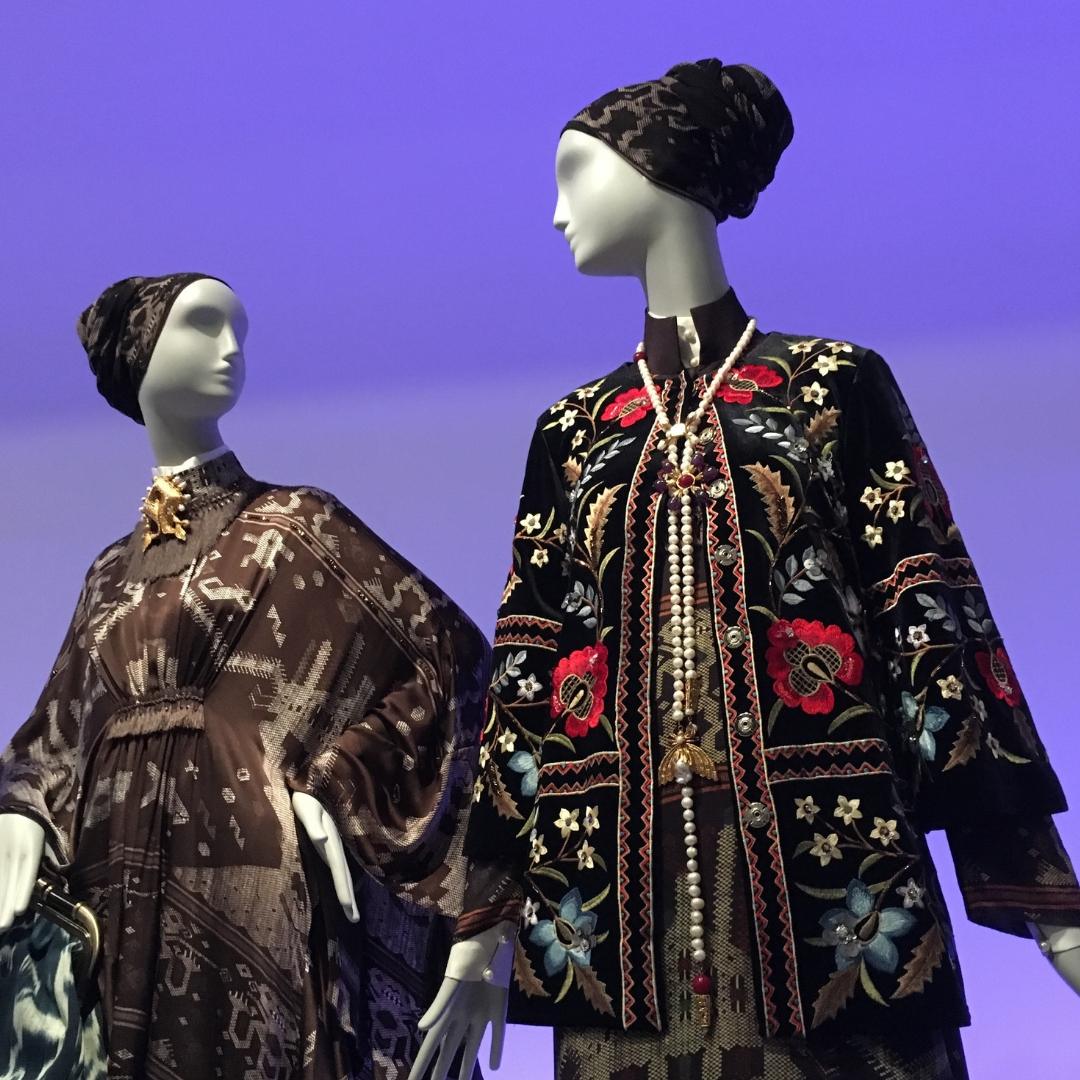 San Francisco isn’t quite the city where you can walk into any clothing shop and find hijabs on display and not attract attention on the streets as a hijab-wearing woman, so to see a billboard-sized Halima Aden grace the front of the De Young Museum’s latest exhibition, was almost hard to believe. Her siren-red, silky dress topped with a prominent, colorful turban, created an animated look of billowing, alarming smoke. Are we being warned that modest fashion is really here to stay? 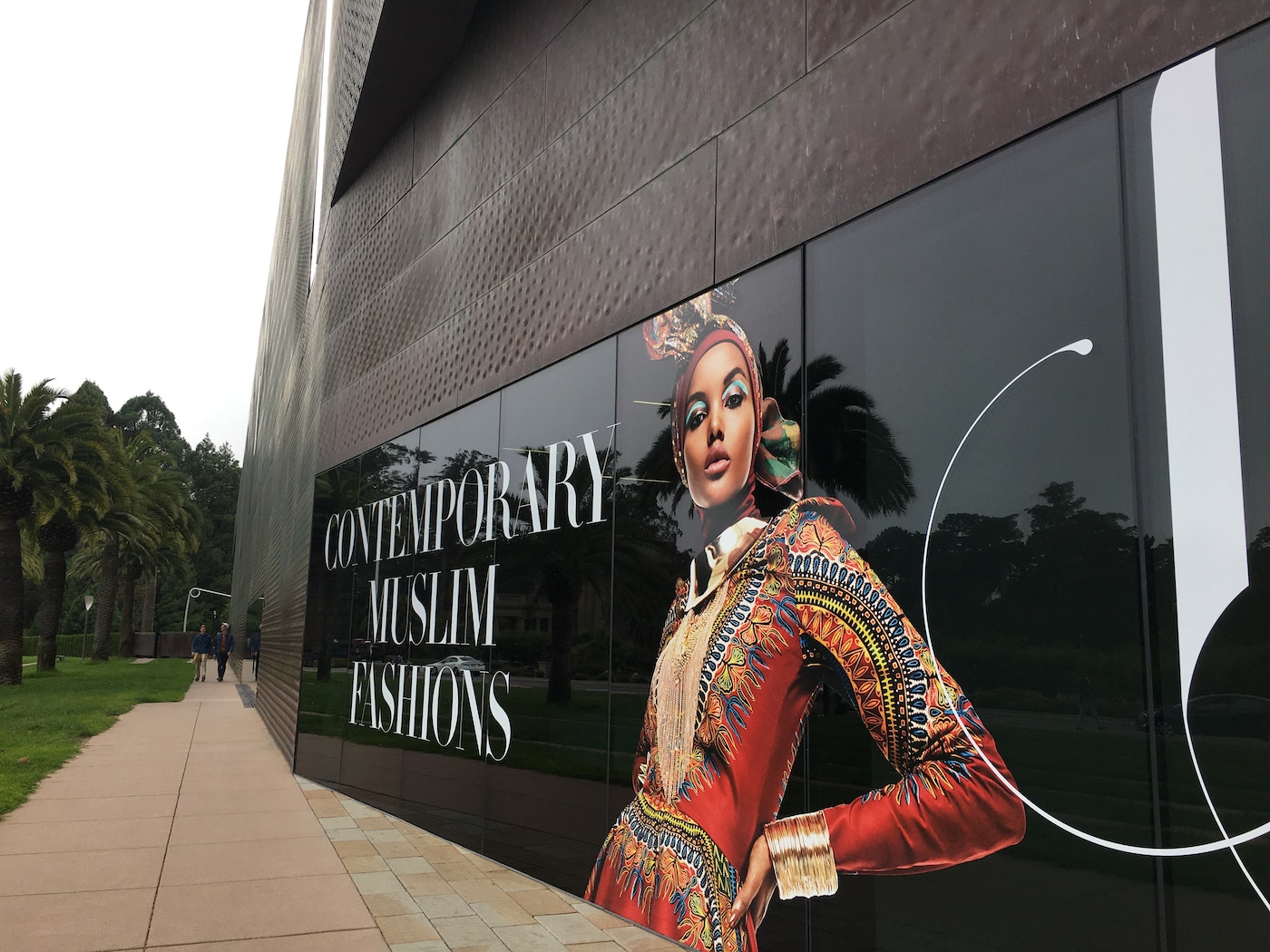 When I first donned hijab in the early 2000s, I couldn’t imagine the words fashion and modesty becoming paired as a buzzword, let alone the embracing of it by mainstream and high-end designers. The existence of a Halima was unthinkable at the time. Yet, on September 22, 2018, the fine arts museum debuted “Contemporary Muslim Fashion,” the first major exhibit to explore Muslims dress worldwide. 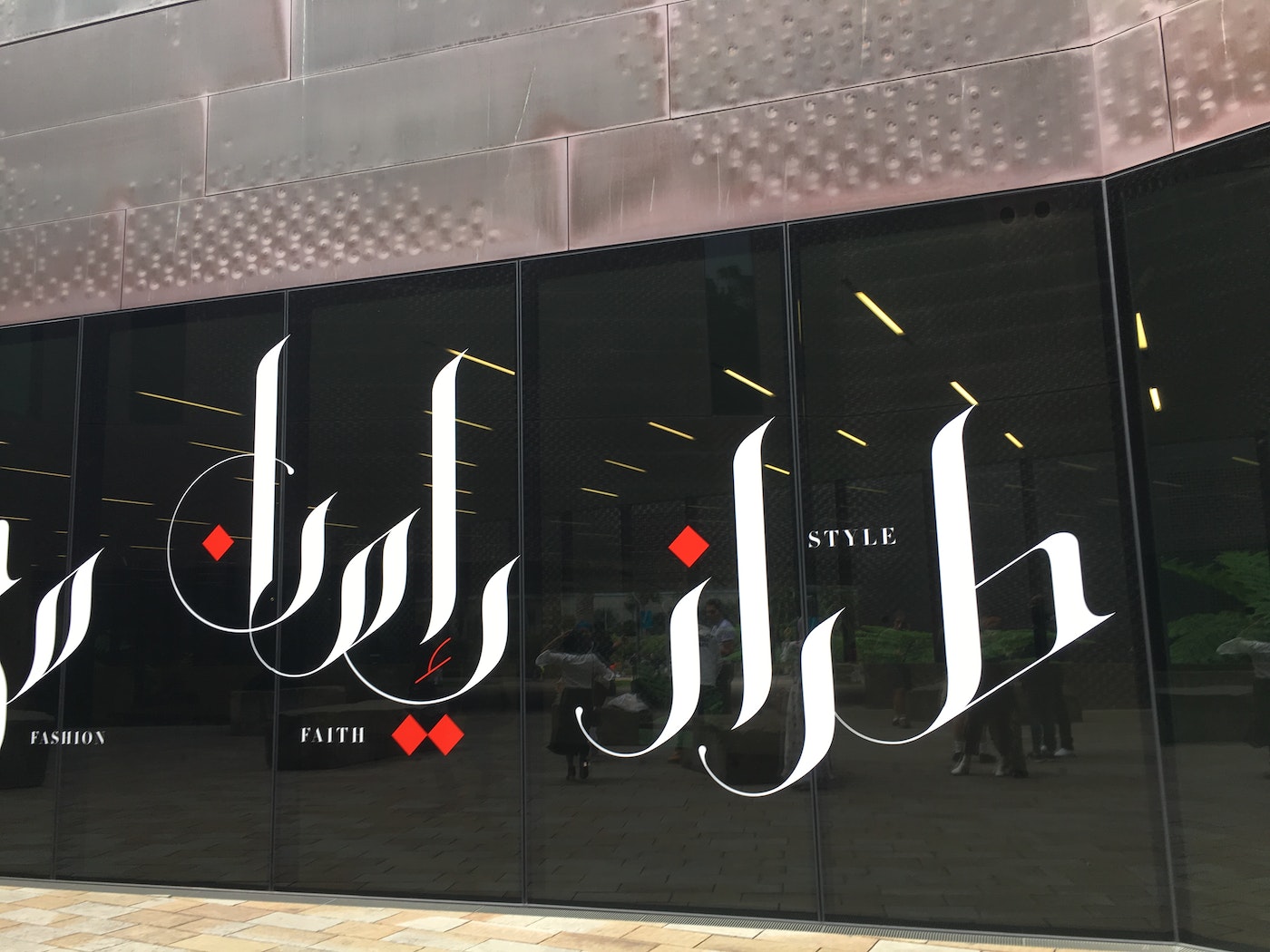 Jill D’Alessandro, head of the Fine Arts Museums of San Francisco textile and costume arts department, co-curated the show along with Laura Camerlango, in consultation with Reina Lewis, professor of cultural studies at the London School of Fashion. The show featured more than 80 Muslim fashion designers and artists from around the world, and included everything from casual clothing and sports-wear, to fantasy evening-wear.

The display felt like an ode to the boom of modest fashion in the past decade or so. The current global fashion spend by Muslim women is estimated to be $44 billion and growing even faster. And perhaps we’re moving too fast and not realizing the broader implications of such an influence. Suddenly, modest clothing has become trendy because the fast fashion market knows it will sell, and as a result, the head-covering and styles Muslim women have been wearing for centuries as inspired by their faith, has become marketable, commodified and ultimately cheap.

An older white woman walking through the exhibit stopped me to tell me she would wear every piece on display. Another told me she was feeling “emotional.”

I can’t imagine what emotion she must have been feeling. But I realised this exhibit was probably never meant for me, and was curated with the ‘audience of an American who has never met a Muslim in mind’. In the black abayas and white prayer outfits, I felt underwhelmed and confused why someone would put something so mundane in a museum. But this is just one side of the story. 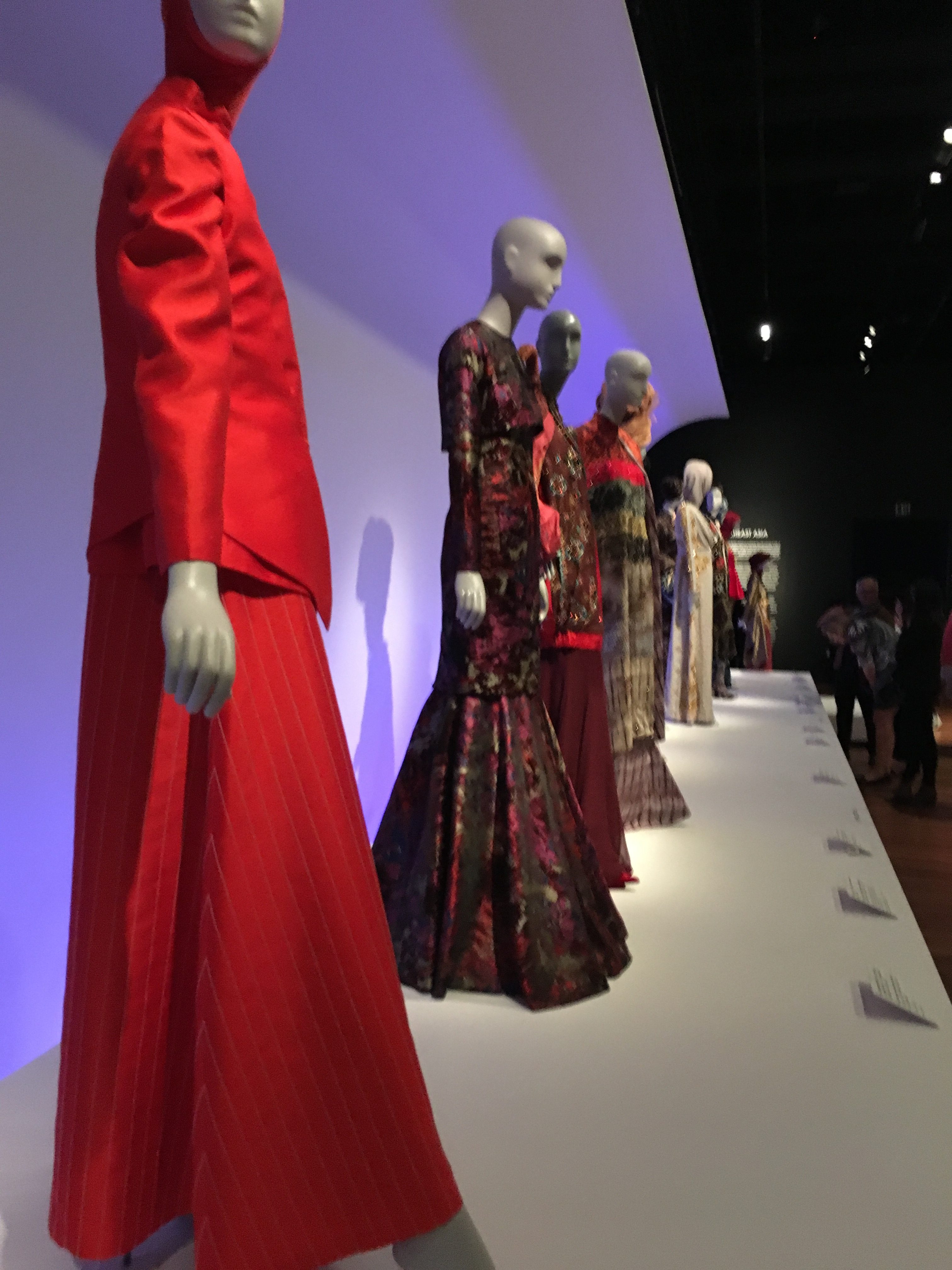 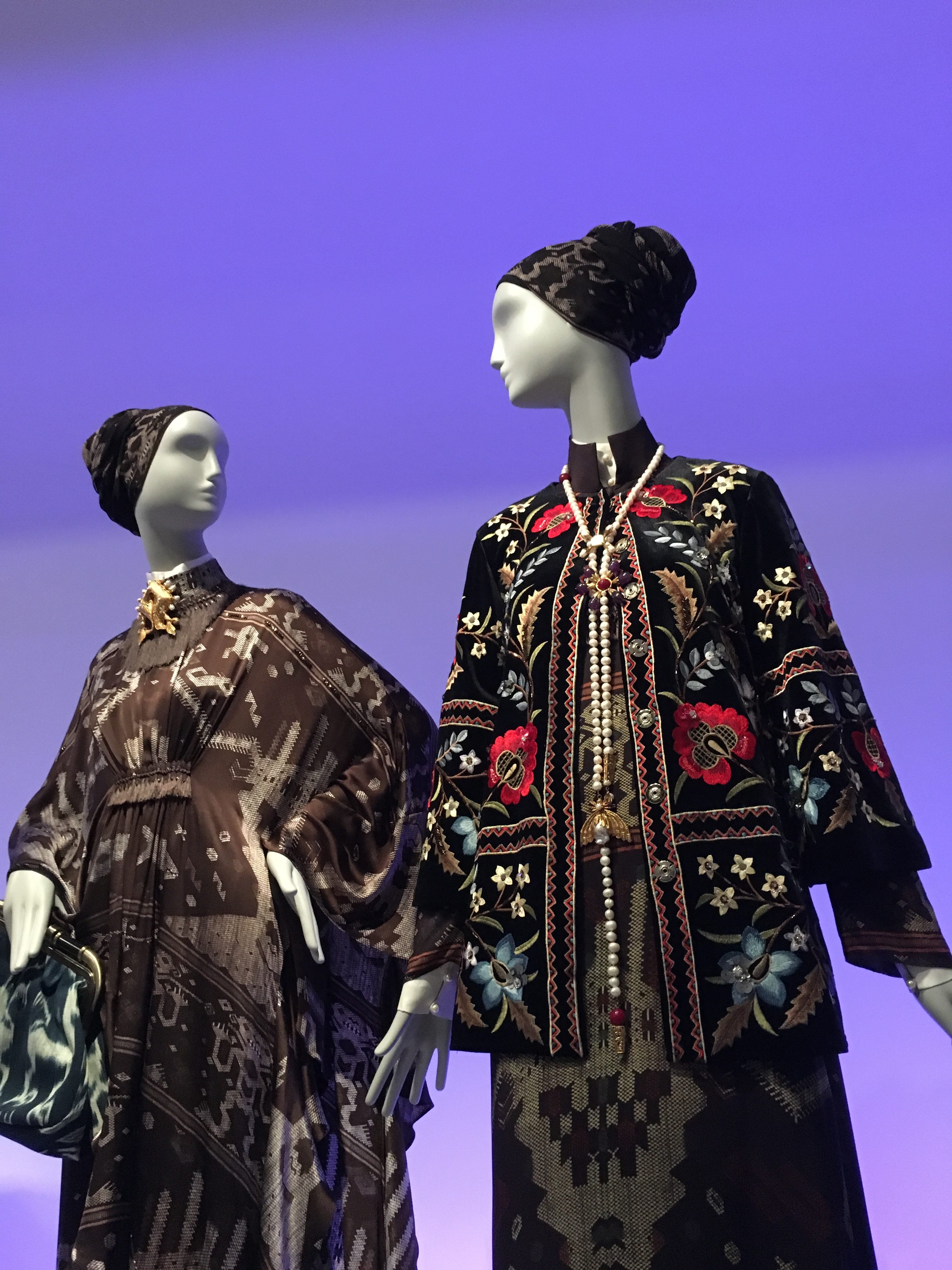 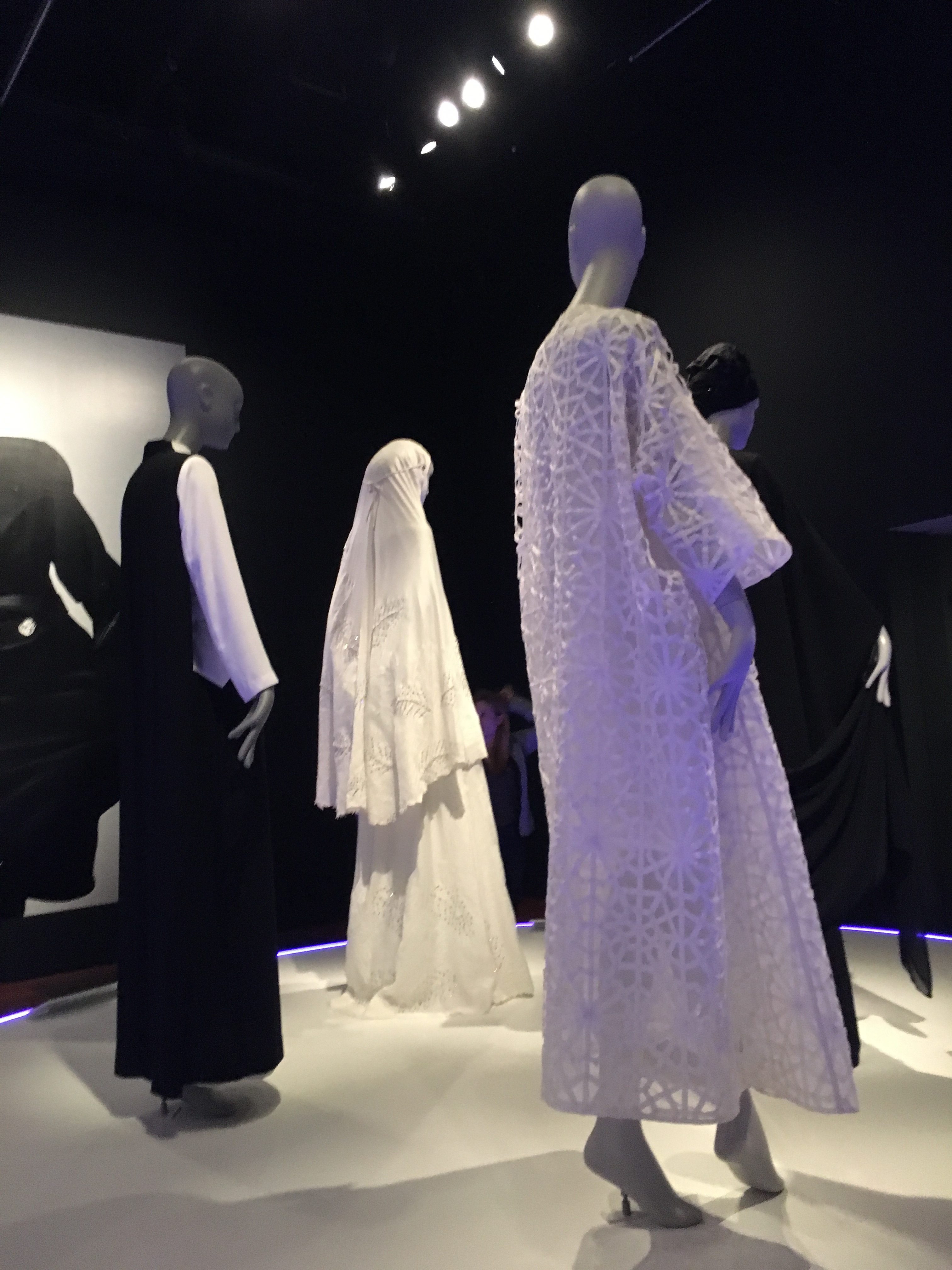 There were moments I felt disbelief at seeing so many things that were familiar and so fully representative of my experience readily viewable to the public. It was as if my Instagram and blog feeds since 2007 were brought to life. In fact, an Instagram feed was streaming with accounts such as @eslimah and @marwaatik. I saw Dina Tokio, Hoda Katebi, Dian Pelangi, Mona Haydar and so many other pioneers in the blogosphere who have managed to successfully carve out spaces to express themselves to a wide audience. The moment felt even more significant when remembering British blogger Dina, was releasing her autobiographical book “Modestly” in the same month.

In sharp contrast to these relatively young and entrepreneurial designers, was the luxury brands which consisted of evening wear and wedding ensembles, mostly created for Sheikha Moza Bint Nasser by the likes of Valentino, Dior, Stéphane Rolland and Karl Lagerfeld. The deep irony here is Chanel designer Lagerfeld has been cited making explicitly Islamophobic statements, going as far as calling Muslim migrants in France an affront to Holocaust victims.

“One cannot – even if there are decades between them – kill millions of Jews so you can bring millions of their worst enemies in their place,” the 81-year-old said on French TV.

So again it is proven that the modest fashion movement doesn’t have so much to do with the empowerment of Muslim women, but rather further filling the pockets of white, male and older fashion Moghuls. While the couture gowns are obviously stunning and invaluable, they are still lifted from the imaginations of people in the Middle East and North Africa who have been creating similar styles for centuries.

A major highlight of the exhibit was the adoption of modest-wear by mainstream brands. This includesNike, which created it’s Pro Hijab in 2017, and Macy’s which began carrying pieces from Lisa Vogl’s line of headscarves and casual modest clothing, Verona Collection. Additionally, shoutouts were aptly given to British-born designer Hana Tajima, who has been working with retailer Uniqlo for five seasons now. Olympian Ibtihaj Muhammad and Munira Ahmed, who has been eternalised as the face of resistance to the Trump administration, were also celebrated. Other pieces also insisted on making statements, including Slow Factory’s bomber jacket, inscribed with the First Amendment, and a headscarf that has “Feminist” tastefully inscribed upon it.

One of the main objectives of the curators was to diversity and challenge the stereotypical image of how Muslim women dress  that currently exists in many Western countries. It succeeded in doing so— but at the same time didn’t because by showcasing mainly Southeast Asia, the U.S., the Middle East and a little bit of South Asia— it discounted Central Asia, Russia, Far East Asia and North Africa. Of course it could not be possible to cover it all, but thus are the traps of labelling a gallery “Muslim” when the religion has 1.8 practitioners around the world. 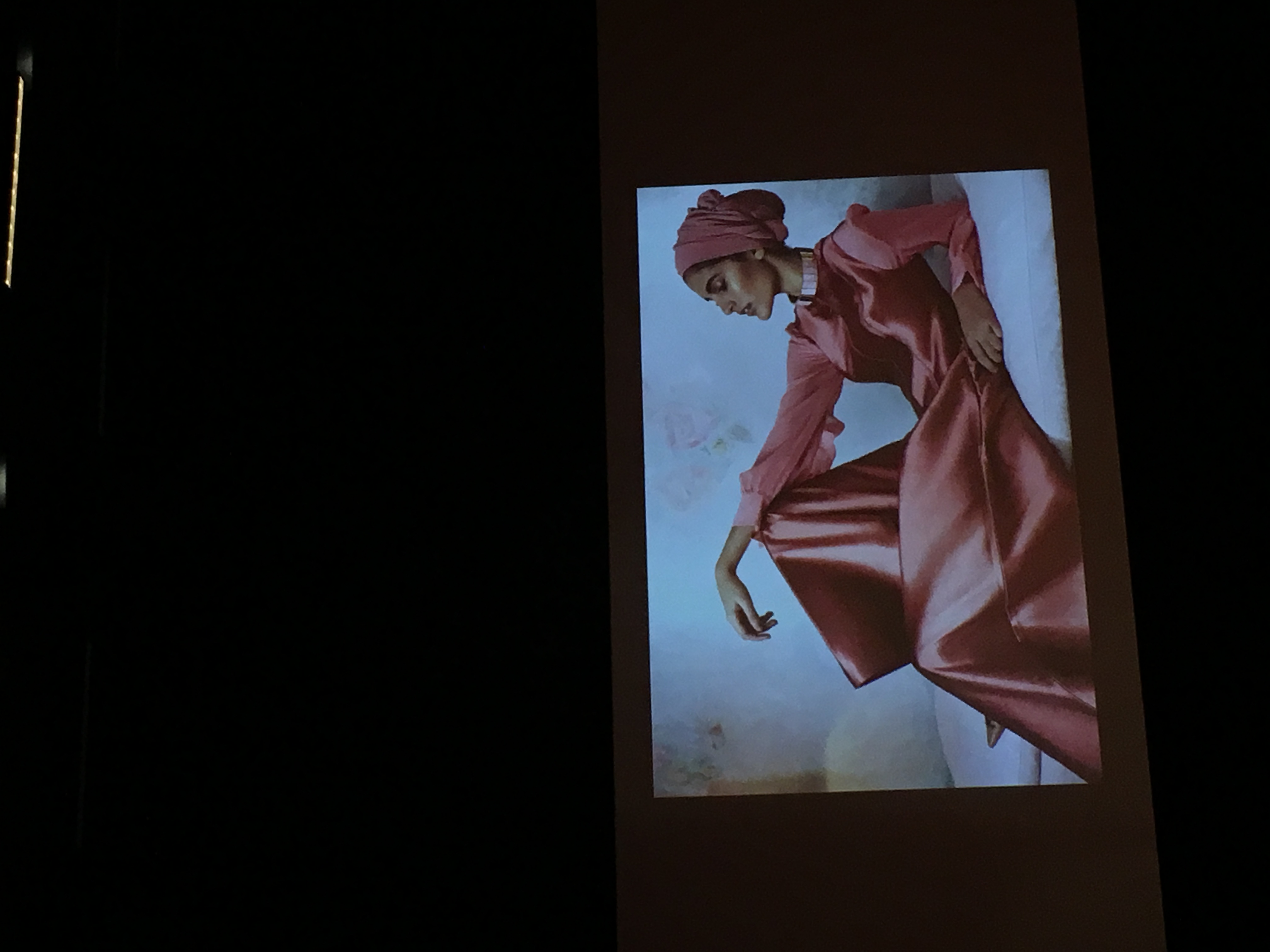 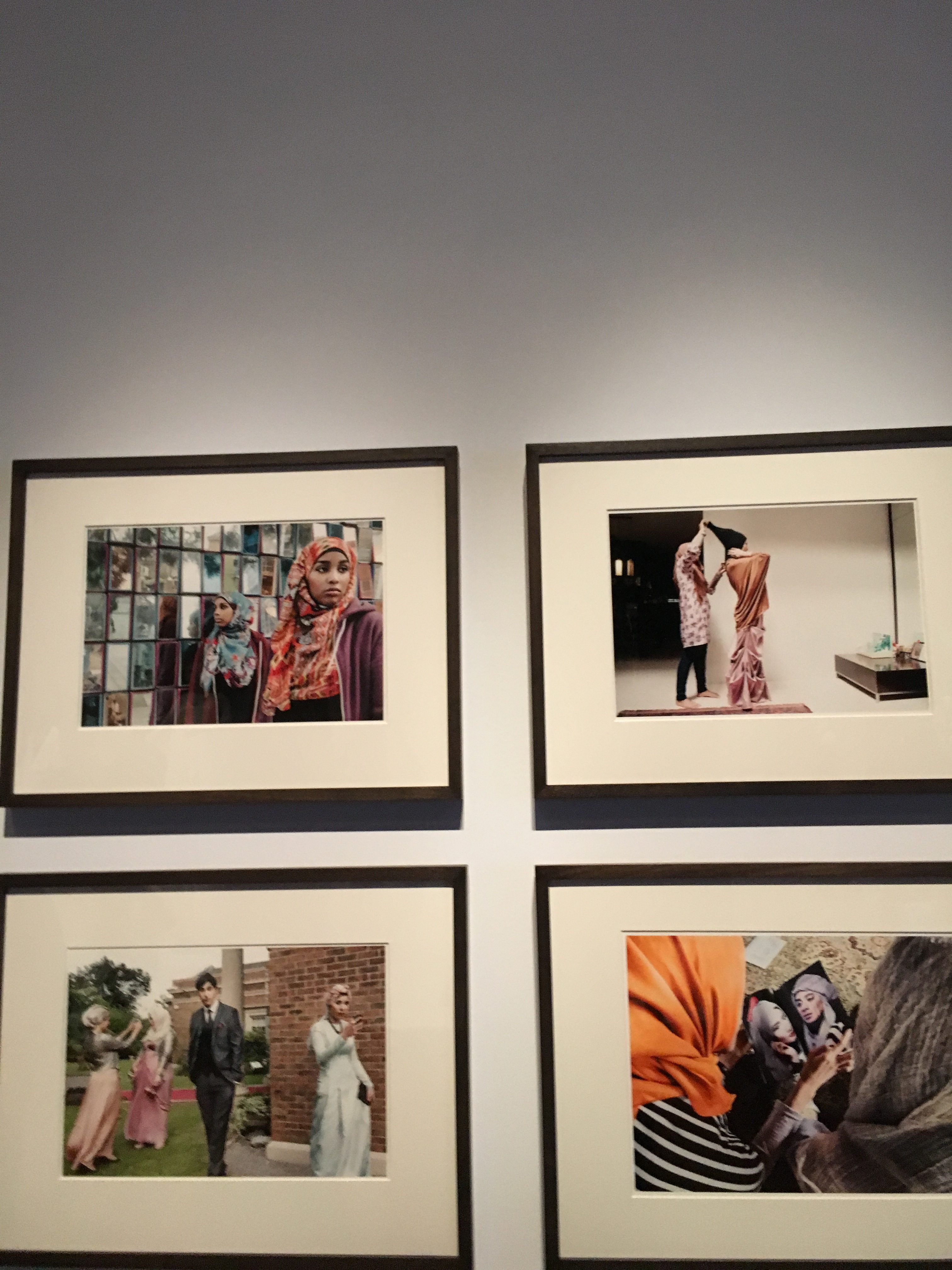 A large chunk of the clothing on display were from designers based in Southeast Asia such as Dian Pelangi (Indonesia), Melinda Looi (Malaysia), Rani Hatta (Indonesia). And rightfully so- the rise of an urban middle class and spending power in the region, coupled with a religious surge, has led to a thriving industry for modest, stylish fashion. Dian Pelangi, who is one of the pioneers of hijab blogging, has nearly 5 million followers on Instagram and set the stage for many others in the field.

The De Young Museum will be hosting the Contemporary Muslim Fashion exhibit until Jan. 6, at which time it will move to Frankfurt.

Atia Musazay is a journalist based in San Francisco, she is part of the Muslim Women in Media cohort with the university of California. Here areas of interest lay in politics, identity, fashion, gender, she is also a content designer at Twitter.

Why We’re Loving ‘Till We Cover’

“How Modest Are We Though? ” – Dina Tokio in the Pursuit of Conscious Consuming