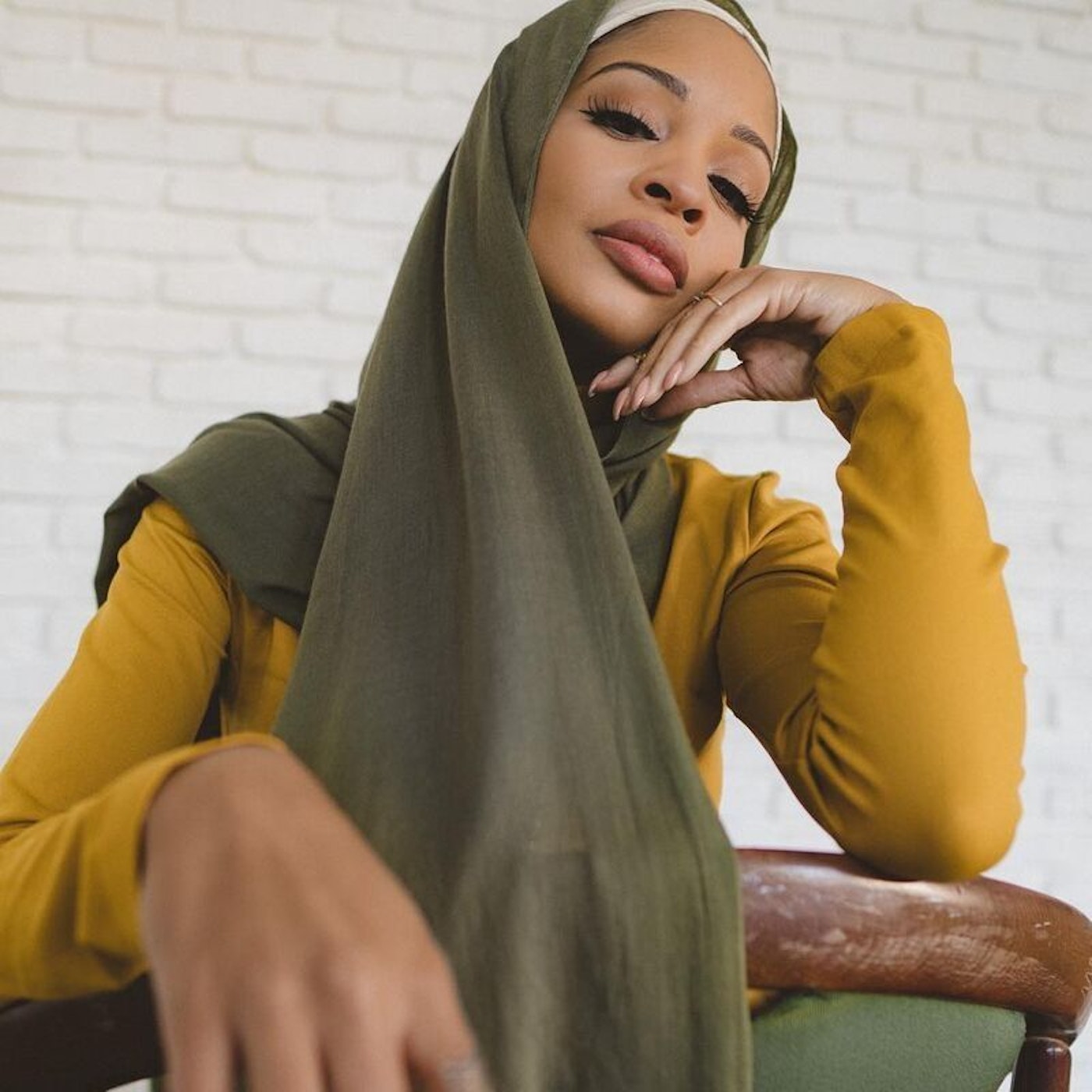 Neelam Hakeem is a Seattle born, multi-talented spoken word poet, former medical claims analyst, mother, rapper, and fierce advocate of women’s rights. The rapper moved from Seattle to LA with her mother when she was 15 after her parents got divorced, her first day in south LA she recalls was on September 11th, 2001. A young Hakeem had to stay in shelters with her mother and often surrounded by gang shootings near her school.

The 31-year-old mother of two now champions the importance of family values and the necessity of finding allies in our Muslim brothers. Often illustrated in her videos directed by her husband of 8 years Marquis Henri, using strong symbols and iconography of beautifully dressed black men as her protective backdrop. Hakeem references the support she has received from her husband who encouraged her to begin her social media evolution to inspire other women to modesty, and her journey into Islam and the experience of her conversion drawing attention to the struggles of wearing a hijab. There is also a strong presence of militant symbolism and themes through her videos when referencing the importance of young black boys and girls learning to protect themselves against violence.

Meet me in Orlando on September 13th – 15th at @bloomingdales in @themallatmillenia for @culturehijab first EVER Trunk Show, Runway Show, Master Classes and more! I will be having a Meet and Greet and do live tutorials on Friday. The weekend is jam packed with events, free gifts for everyone, and some of your fav influencers. Also the drop of @culturehijab fall line which is 🔥 as you can see in this preview above. I hope to see y’all there cuz it’s gonna be lit! Swipe ➡️ for flyer. I’ll keep you posted in my stories! #culturexbloomingdales

She has paved the way for poets to find strength in motion by intricately weaving themes of identity, politics, religious, and social issues masterfully into her work. The civil rights advocate also uses her platform to draw attention to issues affecting black Muslims, and marginalised and oppressed communities from across the world.

Her work is admired by many names in the industry including Will Smith, Diddy, Erykah Badu, and The Shade Room, who reposted one of her videos giving it exposure from multiple platforms with a combined following of 47.7 million followers, opening a door into the mainstream industry for the lyricist. She has already written and published many successful videos produced by her husband and performed at the 2018 BET Hip Hop Awards alongside rap legends Erykah Badu, Banji Yara, Bristeves,  and Oranicuhh.

#flashbackfriday so excited for what’s to come! SWIPE ➡️ Which was your favorite? . . . . . #femalerapper #neelam

Hakeem has been a source of inspiration to the members of the Amaliah team, a role model and change maker through a quietly transformative art form that not many Muslim women have dared venture into. Amaliah recently touched base with the artist since her incredible success to talk hijab, social justice, rap recap, and all else in between.

1. What significance has social media played in your journey, both on a personal level and for your rap career?

Social media is honestly what influenced me to wear modest fashion. On Muslim women’s day, I went through the hashtag and became inspired by all the beautiful and confident women and girls who displayed their modesty in such a gorgeous way. That day I decided to dress modestly and wear the hijab, wraps, and turbans. When my platform grew and girls continued to reach out to me telling me how much I inspired them, l felt compelled to do more with my platform and speak on issues going on in the world. I wrote my first spoken word which later turned into a rap. I was shocked by the feedback. It was reposted by tons of people including the Shade Room and Diddy and my audience grew tremendously. I wrote another one and the Shade Room and Diddy posted it again causing the same results. I was inspired to continue to speak on the issues and make music and I feel so fulfilled when I do so.

@diddy has my back and I love him for that! #family #rocnationbrunch #rocnation

2. What did it mean to be recognised by those like Will Smith?

When Will Smith posted my video I was completely shocked, mainly because I was getting over the fact that Erykah Badu and so many others posted it. The fact that he called it hot and posted my lyrics was amazing to me and I couldn’t believe how much my audience grew and the opportunities that followed. It was indeed a blessing.

HOT! ・・・ Repost @neelam_ ・・・ I ain’t got time for you posers I am the gun in the holster Dunk on you like the posters Turn a boss to a Chauffeur Tell him to stop  Drive up the block  Open the door  Don’t say no more Now you can talk Now you can walk Put in the keys  Put it in park U hate #trump I should rock wit ya? Your conscious now cuz its popular I see you fakes with binoculars  I kill your taste like binaca does  Go stand over there -kilometers I need space -astronomer He says I’m hot- thermometer  What’s else rhymes- barometer  Internet trolls with the threats Say hello to my set  Every woman needs an army All My brothers break concrete  Oh he’s a pimp u should leave em Tell that chump you don’t need em To a queen that is treason Make him leave for no reason Think u woke cuz u vegan  Kids dying you don’t see them? Juniors dead you don’t see em? #justiceforjunior It all erased cuz you plant based? War ends with a handshake I extend til my hand aches Equality on the mandate 40 acres of the landscape I know you love the flow I know you love the clothes The real ones repost Everyone else is like I’m ghost Song by @c.syresmith “Ghost” #neelam #jaden #ghost #femalerapper #rap @jadapinkettsmith #jadapinkettsmith @willsmith #willsmith @willowsmith #willowsmith @christianrich

3. Do you feel like you are in part subverting how some may see rap regarding the portrayal of women?

Most definitely! Hip hop can be really degrading when it comes to women and young girls,  should know that we have the power to steer the wheel in whatever direction we see fit. I believe my platform is a reflection of this and we are just getting started. 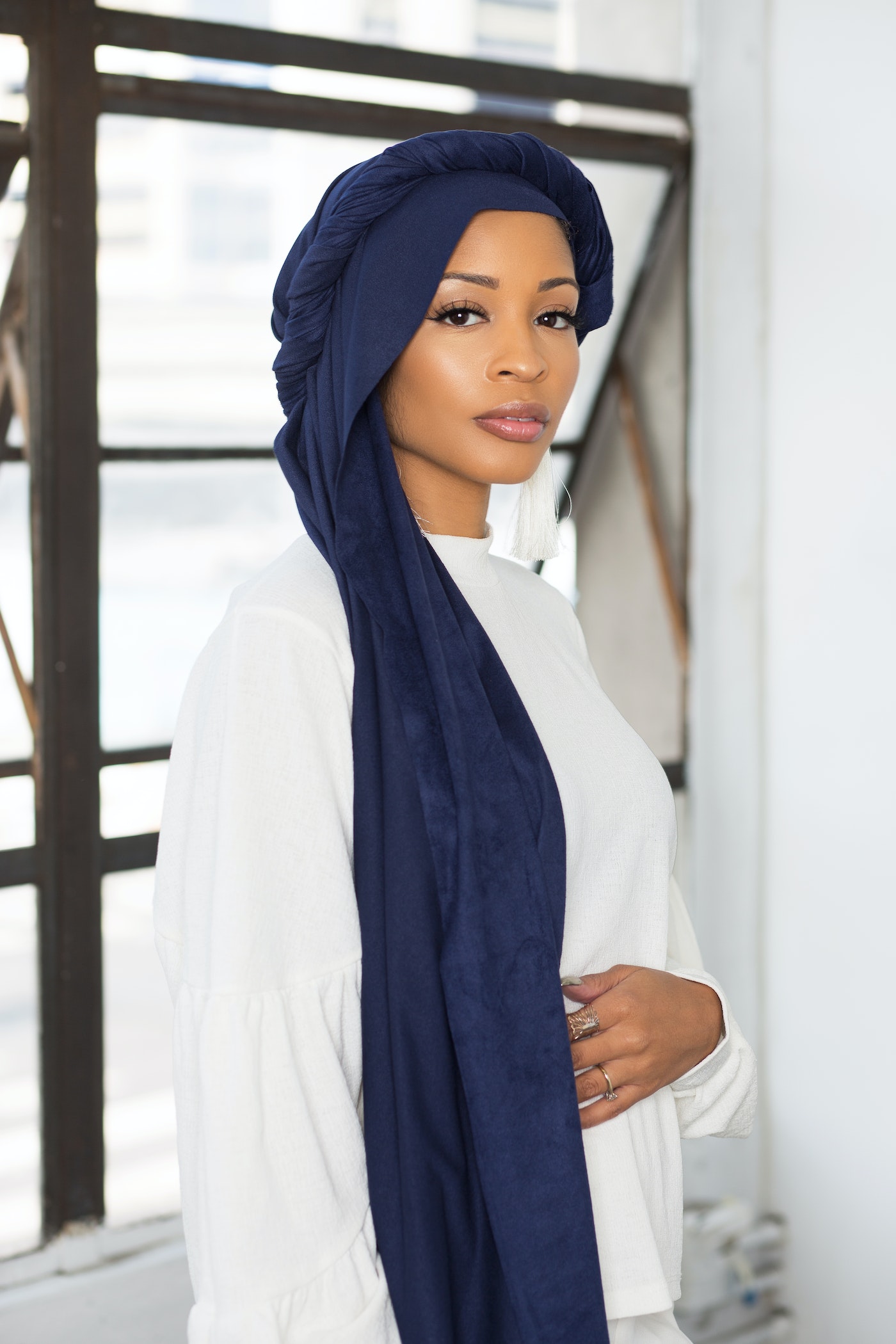 4. Did you ever feel self-conscious when putting your work out? and what advice would you give to those who do?

Absolutely! Every time I’m about to put something out I have a bit of anxiety and nervousness. However, I just say a prayer and just let go. I literally throw my hands up like “it’s out there! But I stand by what I said or did so who cares what anyone thinks!” My advice is to be your authentic self. If you like your work then no one else’s opinion matters.

Everyone else has posted the Neelam Hakeem video (including Will Smith and Diddy) so I might as well do it. #NeelamHakeem has bars and is beautiful yet covered up and still got props. Hopefully she could be the start of something #HipHop #BarsMatter https://t.co/9b1M5Wcnpx

5. We love your rap recap and feel like it delivers important messages and world news in a different way to those that may not typically engage with such headlines. What do you think is the biggest barrier that stops individuals engaging with politics and why is it important to be aware?

People are not politicians so politics can be confusing. It’s designed to be that way. In my rap recaps, I like to talk about current events and give my perspective as a way to simplify things. Politicians are good with words and raising money. 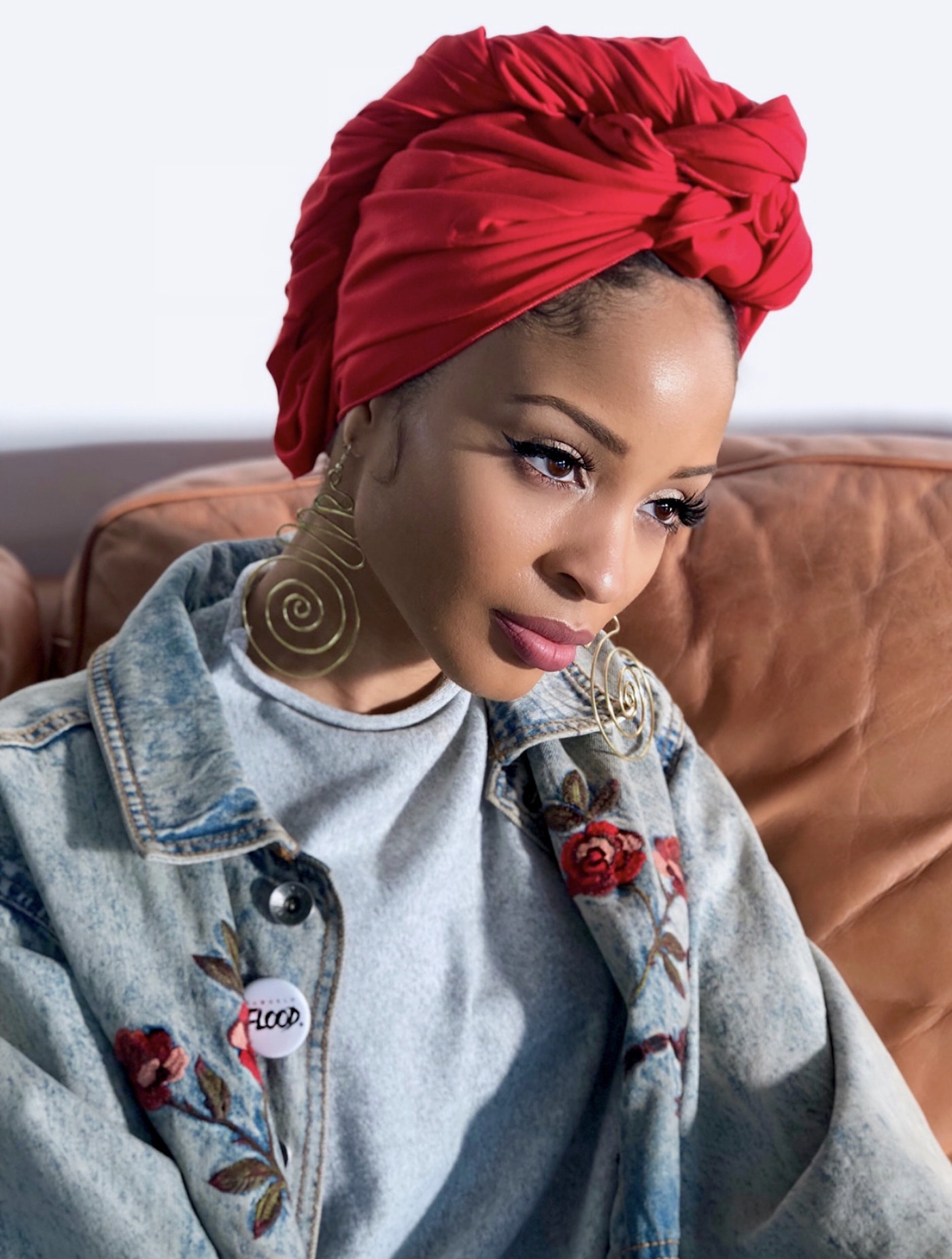 6. What role do you see your work play in pushing conversations around politics and social justice?

Being aware of what has changed and what hasn’t is an easy way to determine if the politicians are real are not. I offer a truth in hopes that we can see through the tricks and unify to do for ourselves what so many have failed to do for us.

7. What are the values that guide your work?

Truth, being real, and speaking for those who may not have a voice.

Happy Birth Anniversary to my precious baby girl! Almost died birthing you, but I’d do it all again just to hear you sing everyday! (Sorry guys I love editing special videos 🤷🏽‍♀️) #4yearsold

8. Your videos are always visually striking and an art form in themselves, what do you hope to convey? You often use powerful military iconography in your videos, why do you feel this is an important aspect to unpick?

9. Which artists inspired you growing up?

Rare moment of @marquis_henri in front of the camera, instead of behind it. . SWIPE . Rockin the @musahill_ crowns 💫 Turtleneck and hijab from @culturehijab dc: neelam10

10. What do you see wrong in the world at the moment and how do you hope your rapping and message can change that?

There’s just so much injustice, inequality, and lack of true freedom for all. I just want to speak about issues that seem to be ignored. I’m looking to speak to that place in a person that will cause a change to these injustices.

BTS of some of my favorite moments shooting #illbetheking wearing my favorite fit by @DulcebySafiya 🖤
Be sure to click the LINK https://t.co/ss8ZZZaj4A if you haven’t already!
🎥 @D_Roe 🎬 @marquis_henri #neelam pic.twitter.com/pTn7yZvggL

11. How does your identity feed into your work?

My identity is my work. What I talk about, what I wear is all who I am and it’s all I present. 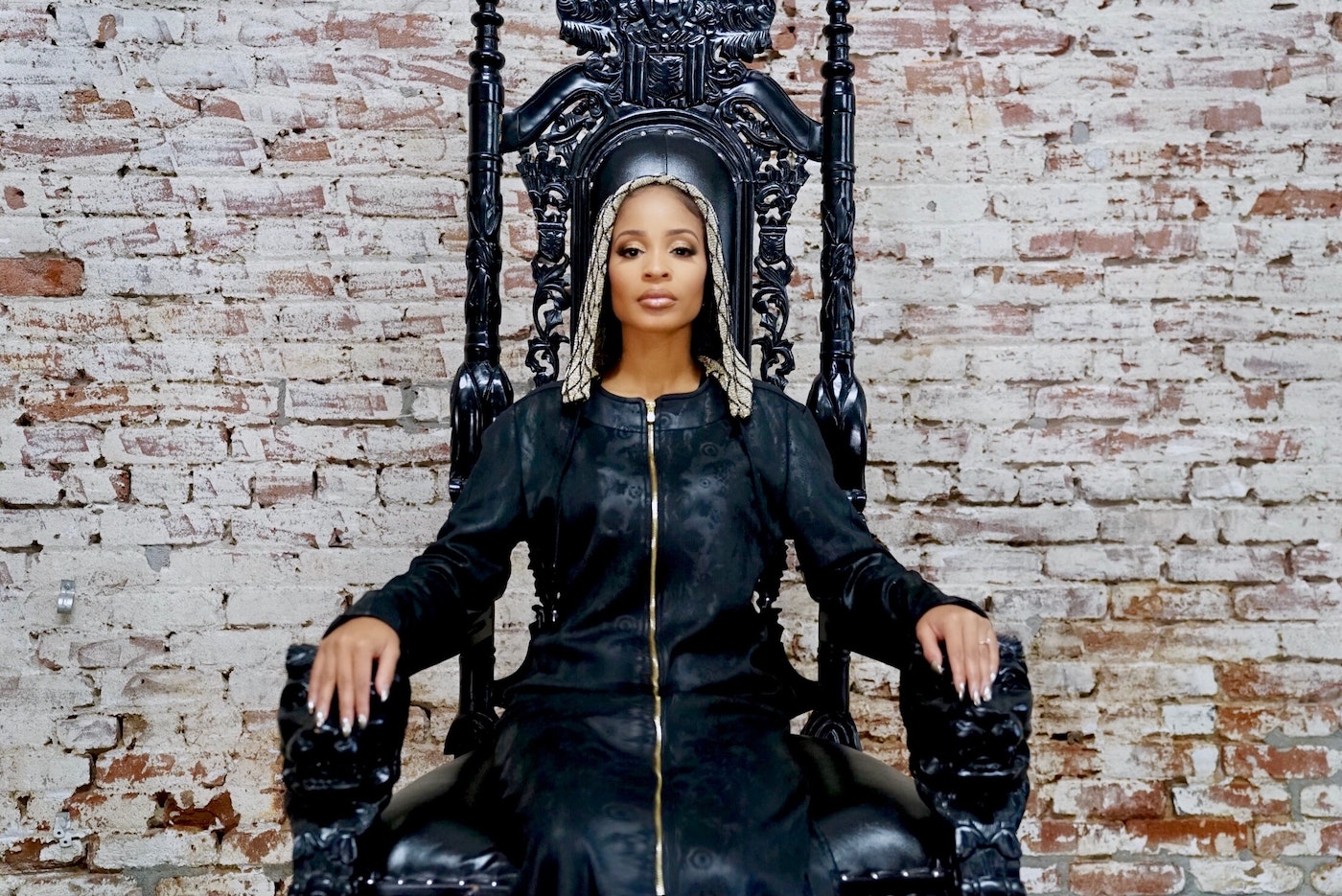 12. In your vogue interview, you spoke about how you never felt like you were entirely ready to commit to the hijab and that your hair was a crutch for you, what changed for you and what advice would you give to young women out there who struggle with the hijab?

What changed for me was looking at the hashtag on Muslim women’s day, to see that there are so many ways to be modest with your identity. There are “classic” hijabis, “rocker” hijabis, “urban” hijabis “fit” hijabis etc, the list just goes on and on. You can totally be yourself and I guess I didn’t realize that until that day.

My husband is one of my greatest blessings from God. His love is a gift that I open everyday. Alhamdulliah 🖤 @marquis_henri thank you for your constant support. Tap for details. #blacklove #bethiphopawards2018 #bethiphopawards

Becoming the Invisible Woman: The Secret Diary of a Middle Aged New Hijabi