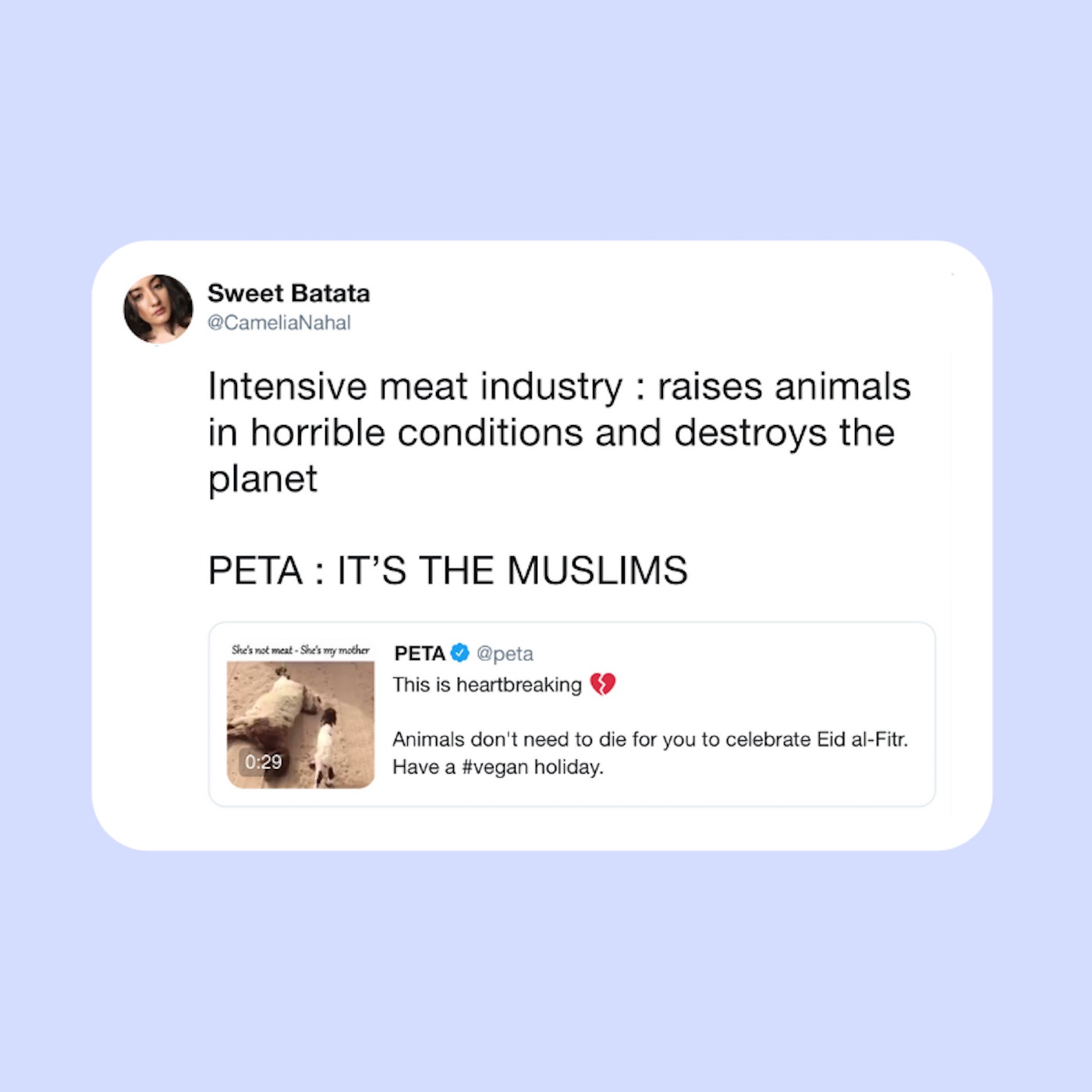 Animal rights organisation PETA have come under fire for their Eid tweet which saw them release a video of an animal being dragged along by a car. The video was accompanied with the tweet “This is heartbreaking  Animals don’t need to die for you to celebrate Eid al-Fitr. Have a #vegan holiday.”

Many commented that perhaps PETA have got the wrong Eid and more importantly pointing out that the video is not in line with Islamic practices when it come to slaughtering meat.

Miqdaad Versi, media spokes person for Muslim Council of Britain, called the tweet “awful and irresponsible” and went on to tweet, “other than clearly getting the Eid wrong (I assume they would have meant Eid al-Adha), the choice to insinuate this is how Muslims slaughter animals and the choice to put this out on Eid day, is appalling. Be better.”

Animals don't need to die for you to celebrate Eid al-Fitr. Have a #vegan holiday. pic.twitter.com/EwdvLeujlX

Other than clearly getting the Eid wrong (I assume they would have meant Eid al-Adha), the choice to insinuate this is how Muslims slaughter animals and the choice to put this out on Eid day, is appalling.

Imagine attacking muslims instead of wishing them a happy holiday. This is why you’re a joke PETA https://t.co/WMR9j8xkMh

Beyond @peta being totally off (and unapologeticall and arrogantly so) about which Eid this is, the above video is abhorrent and would be totally unacceptable by any Islamic standard, from the manner of the slaughter to the apparent sex of the animal — all wrong.

🤦🏽‍♀️ which social media intern at @peta got it wrong twice today? 1. an animal treated this before or after slaughter way is very likely not halal 2. Eid al-Fitr isn’t the one centered on meat consumption and distribution. https://t.co/CVd3bfOKu4

First, we don't drag goats around. Second, Eid isn't about killing animals, it's about giving to the people in need. People who have money usually buy a goat to give meat to the poor, not for fun. You can't expect everyone to be vegan.

Omg PETA henny pls. Firstly animals are slaughtered on Eid al Adha lol but we don’t even know if these people doing this are Muslims! Also – the animals slaughtered are often used to feed ppl in poverty – are u guys sending tofu packs to rural poor parts of the Muslim world or..? https://t.co/CGpzV0B4JZ

this is such an irresponsible video for a giant company like PETA to put out, not only did they get the Eid wrong, but they’re also insinuating that muslims practice this inhumane way of slaughtering animals https://t.co/GWFEYpjdcd

Hi @peta super appreciate your enthusiasm but you get this is Eid al-Fitr not Eid a-Adha right? We just break fast today. While I do appreciate you being woke enough about our rituals to target them, it would be nice to get the right Eid. https://t.co/AunwC4nbuL

What’s also heartbreaking is @peta being islamophobic and spreading the wrong message. You already know that a) that’s the wrong Eid, and b) halal meat is the most humane and clean way to slaughter. Don’t tell us how to celebrate our religion thanks https://t.co/p0kwiceCzZ

Dear @peta super appreciate your enthusiasm but this is such an irresponsible random video for a giant company like you to put out, not only did they get the Eid wrong, but they’re also insinuating that muslims practice this inhumane way of slaughtering animals. This is (1/4) pic.twitter.com/9Mcg8JSQ1T

Why is PETA tweeting like it learned about Islam from watching too much Fox News? https://t.co/pb0JsZKv2N

Raising Money Online for Charity This Ramadan – A 7 Point Guide