#Srebrenica 25 Years Later We Mourn the Loss of Sons, Brothers, Fathers and Husbands 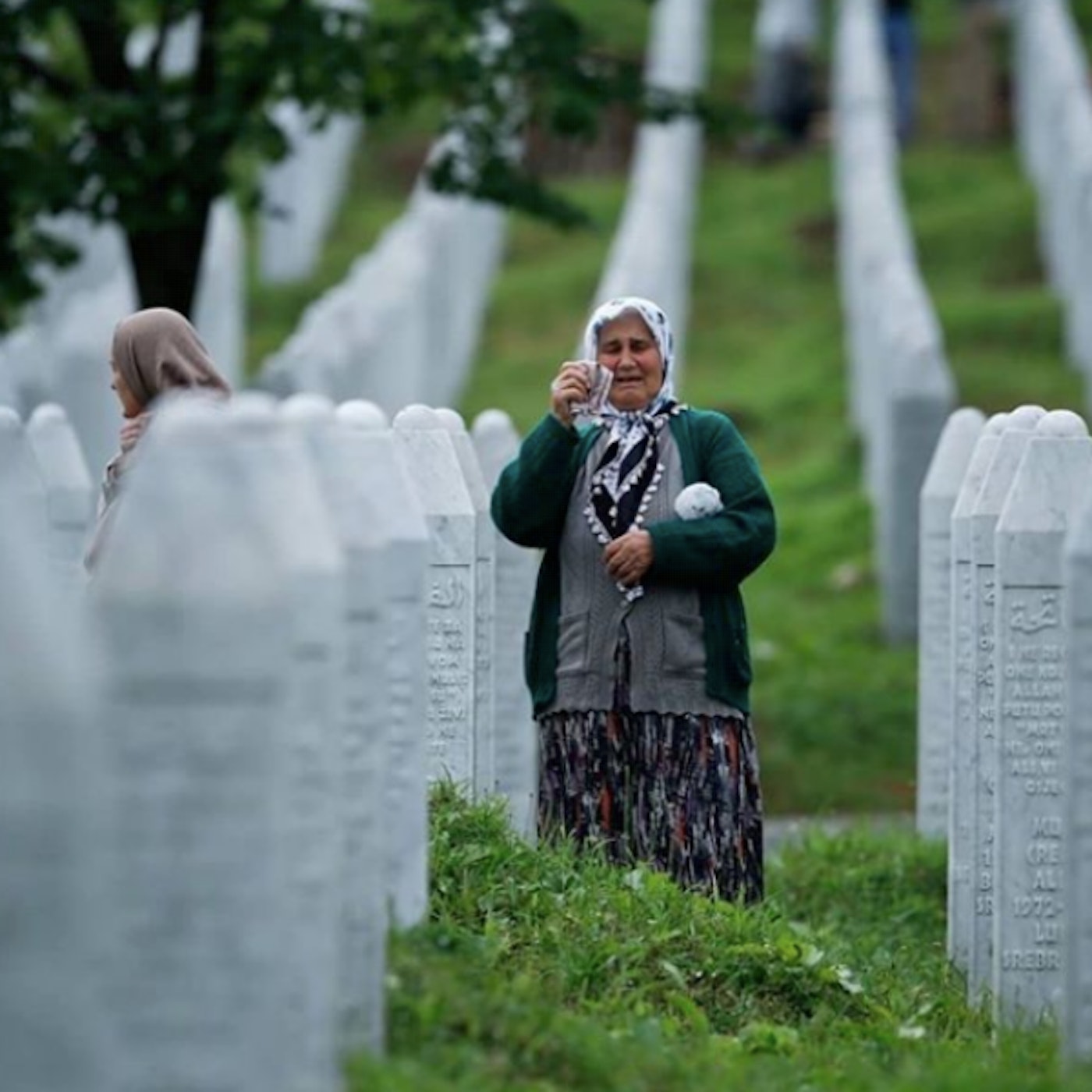 Today, 11 of July 2019 we’ve seen many around the world mark 24 years since 8,372 Muslim men and boys were murdered in a genocide that took place at Srebrenica, Bosnia, at the hands of Serbia’s military. The victims who were systematically and brutally killed were men and boys from the age of 7 years old to 70 years old. At the time a civil war had been going on for about 3 years. It is recorded as the largest and most significant atrocity since World War II.

The effects are still felt by communities in Bosnia especially the women, the mothers, daughters of the deceased along with their families.

The flower often seen during the week is symbolic. The white signifies the innocence of the Bosnian people and the green for hope and there are 11 petals on the flower to mark the date.

One thought that has occupied me as I write and read about our brothers and sisters in Bosnia is the plight of Muslims in China, Rohingya and Central African Republic. May Allah grant them all ease and the families of Srebrenica comfort that their loved ones will be granted Jannah Insha Allah. Ameen

See below for more comments, information, and reflections on the day.

On July 11, 1995, #Serbs captured the town of #Srebrenica, Bosnia-Herzegovina, starting a genocide that would result in the deaths of 8,372. It was the worst mass killing (Genocide) on #Europe since World War II. DONT FORGET SREBRENICA. pic.twitter.com/oUO9mTOa3p

24 years ago one of the most shameful tragedies in history unfolded in my country. The world watched as 8,000 Bosnian Muslim men and boys were killed by Serb forces in #Srebrenica. Today, this small town is a reminder of what happens when we ignore hate, until it is too late pic.twitter.com/9dwvKUn5PG

Today marks the 24th anniversary of the Srebrenica massacre, the worst mass killing in Europe since World War II. Ive been on the anniversaries for three years in a row since 2016 but this year I couldn’t make it due to duty. I only knew about Srebrenica massacre in 2015 and ever since I have been connected unknowingly, exposing and sharing to those in need to know. . For this year, relatives of the more than 8,000 Bosnian Muslim men and boys killed by Bosnian Serb troops were among those attending a ceremony at a memorial site that included the burial of 33 newly identified victims of the July 11-22, 1995 massacre. . More than 1,000 are still considered missing from the mass slaughter during the Bosnian civil war. Many victims were ambushed along forest routes while fleeing Srebrenica in scorching heat without food or water. They were either shot on the spot, or taken to collective centers where they were executed and thrown into mass graves. . Nura Begovic was burying the remains of her brother, who was identified through his hand bone. “I spent 24 years looking for his body and I only found one bone," she said. "But today, both I and my family have found peace." . Even though I didn’t go to Srebrenica today but I did when to a special place in the Igman mountains. Igman’s defense was the paradigm of the defense of Bosnia and Herzegovina, and at that time on this place, soldiers of Army of Bosnia and Herzegovina started to build mosque, who will after the war become famous as The Igman War Mosque. . This mosque was built from the soldiers on their own initiative, in pauses between regular defense missions. For soldiers this mosque was the meaning and the truth of life, and not only the place where they practice prayer, but it was also the spiritual basis for the survival of the entire people, and a witness to its historical duration. . #neverforgetsrebrenica #igman #bosniaherzegovina #routexplorers #wanderlust #adventurer #backpacking #shoestringbudget #srebrenica

The Flower of Srebrenica, a symbol of remembrance of the victims of the Srebrenica genocide.The flower has a message; white signifies innocence of the Bosnian people,green signifies hope and eleven petals stand for July 11,1995. #Srebrenica pic.twitter.com/Nxe983SGUk

8372 civilians have been brutally massacred pic.twitter.com/adNraeFSgb

🕊️💚Today is #Srebrenica Memorial Day, remembering over 8,000 men & boys murdered in Europe because of their Muslim identity

Today marks the 24th anniversary of the Srebrenitsa genocide, the worst atrocity on European soil since the Holocaust. . In July 1995, Serb forces systematically killed more than 8,000 Bosnian Muslim men and boys – and thousands of women were raped. . The remains of 33 newly-identified victims were laid to rest at the memorial cemetery in Potocari, next to thousands more. . Do you know what led to this massacre? Look for the link in our bio for our article on the ten stages of genocide. . #Srebrenica #warcrime #genocide #war #Bosnia #Serbia #Muslim . | 📷 Photos: Darko Bandic, @apnews / Fehim Demir, @epaphotos |

We will never forget #Srebrenica pic.twitter.com/ezgT5waWzm

We will never forget. As a muslim I feel even closer to those who have lost their loved ones in that day. In some places of the world nothing has changed. People still dying under tyranny, oppression, racism & terror. pic.twitter.com/iNz66FAlFK

24 years ago today, over 8,000 Muslim men & boys were massacred in #Srebrenica by Serbian forces in the largest genocide of civilians in Europe since WWII.

We must never forget, many who today claim higher values simply stood by and watched.#NeverAgainhttps://t.co/hiFNqAKJ9q

Oh forget it, they were Muslims. Hypocrisy pic.twitter.com/YCAB5O6rDT

A very important thread on #Srebrenica and the Bosnian genocide: https://t.co/C4W2lBi4iP