Book Review – That Can Be Arranged: A Muslim Love Story 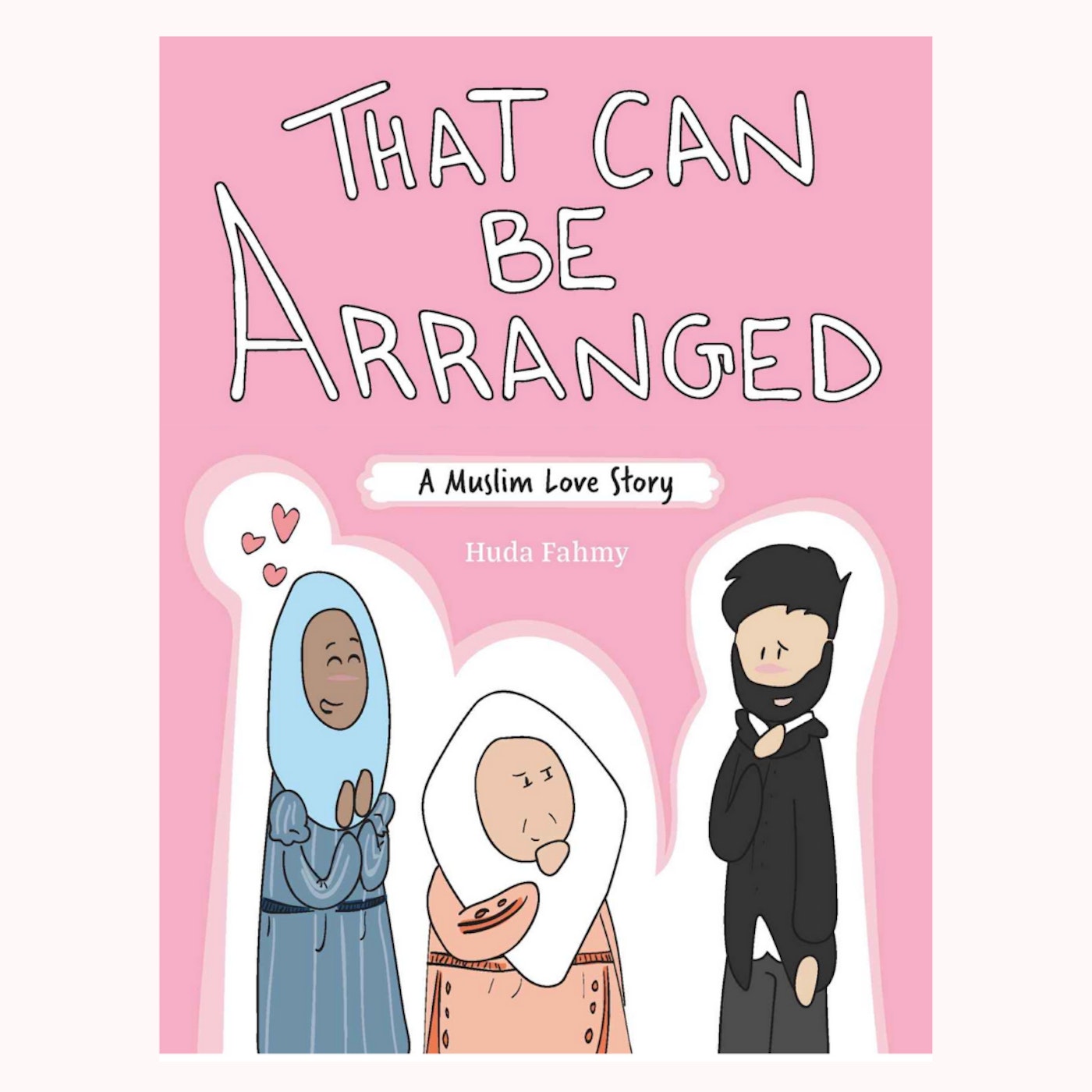 Book Cover – That Can Be Arranged

“The thing I most want readers to take away from this story is that Muslims are not a monolith. And while writing this book has been about sharing my story with the world, more than anything it’s become about reclaiming our stories for ourselves. We get to write our love stories, and we get to love our love stories.” – Huda Fahmy

Cartoonist and author Huda Fahmy carved out an audience of hundreds of thousands from an already niche genre and format. Fahmy, an Egyptian-American, gained popularity on Instagram after her Yes, I’m Hot in This webcomic, and later book, captured the interest of hundreds of thousands, a testament to the ubiquity of the minutiae of daily life in the 21st century West as an observant Muslim woman. Her second book, That Can Be Arranged, released March 10th, moved from the realm of comical wardrobe-related foot-in-the-sink anecdotes to a deeply personal journey to find love. Though today she lives in Houston with her husband Gehad and their son, the book gives insight into the years up to meeting her husband and the obstacles she faced both externally and internally.

Yes, I’m Hot in This, Huda Fahmy tells the hilarious story of how she met and married her husband. Navigating mismatched suitors, gossiping aunties, and societal expectations for Muslim women, That Can Be Arranged deftly and hilariously reveals to readers what it can be like to find a husband as an observant Muslim woman in the twenty-first century.

Even when represented in media, Muslims in the West face a plethora of reductionist plot lines, and are rarely afforded a non-cliché, intricate, relatable, or even comical love story. Love is a thread that weaves through communities and time, and Muslim love stories, too, range from heartbreaking to joyful, tragic to silly. The solution is to not entirely depend on others to accurately capture our values. As Dr. Umar Faruq Abd-Allah writes, “We must be producers of culture, not passive consumers of it.”, and it’s in the vein of this cultural imperative that Fahmy puts together a fantastic, hilarious work on love. 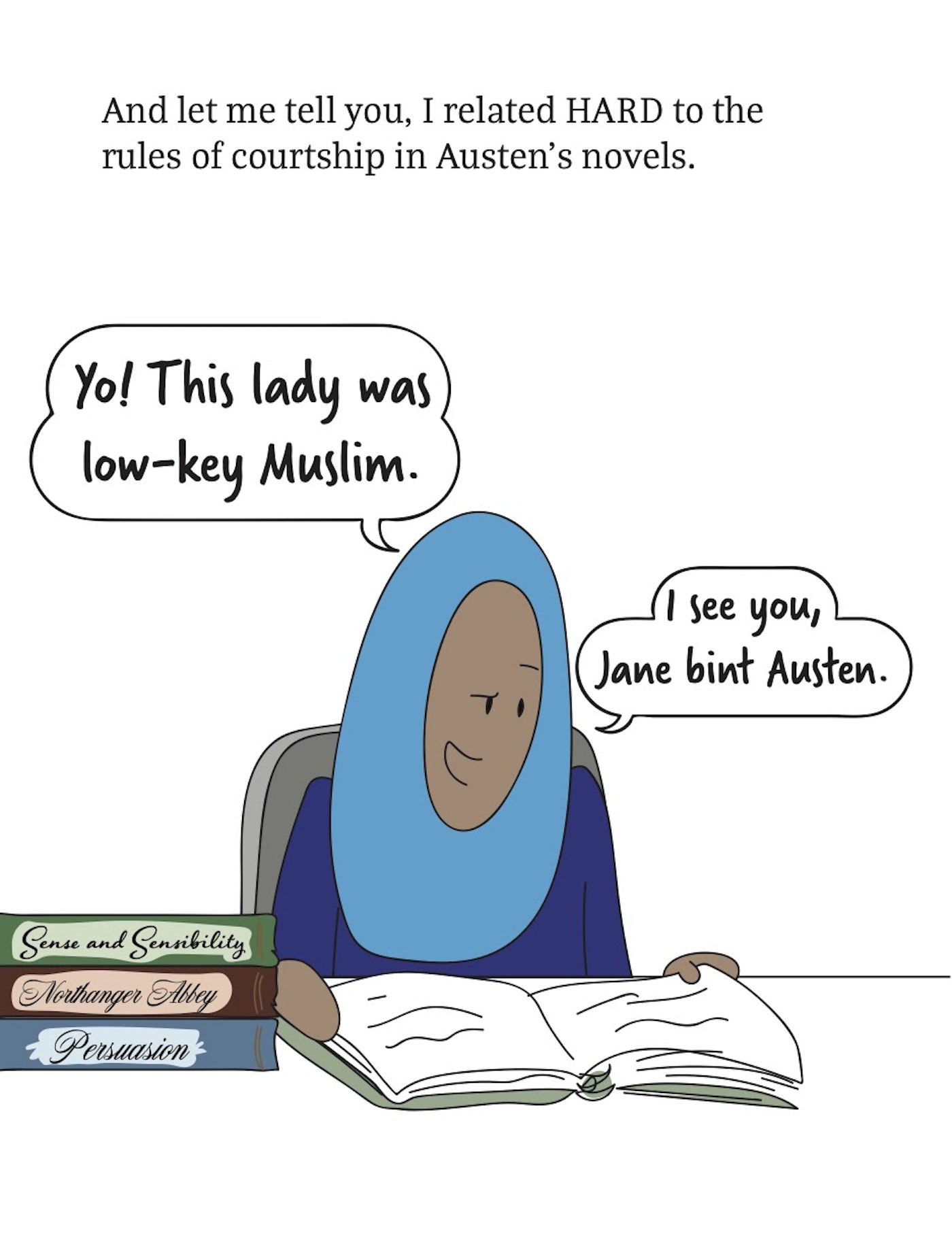 What I enjoyed most was that That Can Be Arranged is a single story told in over 150 pages of her recognizable style, whereas her previous book was a composition of independent anecdotes. Because of this, I felt far more invested in the character journeys, even looking forward to her mom’s appearances (followers of Huda’s blog are familiar with the infamous bitcoin episode). From the first page, Huda establishes the tone: joyful but unyielding to unwelcome notions of what a “proper” story should look like. 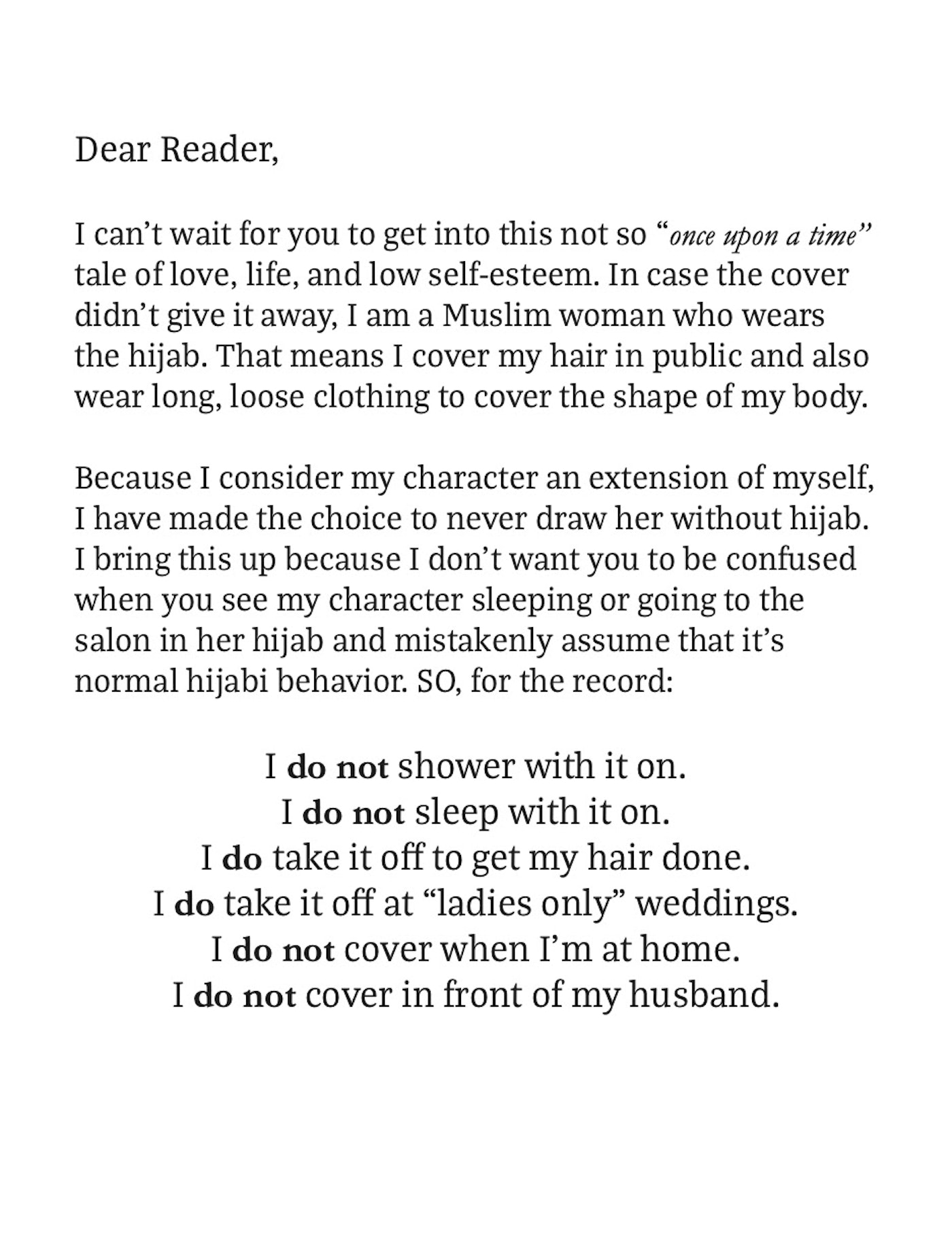 Fahmy’s approach is two-pronged: on the surface, an immensely fun read with all the whimsical musings of a romantic leading-lady, but revealing of a deeper desire to build self-worth and trust in Allah while embarking on the journey to find the one, a struggle not unfamiliar to many of us. From the way she illustrates her story of potential suitors and dodging wayward comments, it’s hard not to reflect on the low self-esteem and doubts people, but especially women, are often plagued with. At one point, Fahmy asked her parents to start looking as people she knew began to get engaged and married. A few years later, there was a chance encounter she had with a guy she knew from university, and it led to them seriously considering each other for marriage, but red flags piled on and eventually she said no. It left a trail of doubts: would she’d ever get married? Could she afford to pass on this guy? Was the fear of being alone enough to settle for being with someone neither she nor her parents liked?

I remember approaching my twenties and similar internal strife beginning to fester as people around me began to plan their weddings. And, like Fahmy, I began to understand that dignity and worth was tied to my standing in front of Allah alone. It was an incredibly liberating conviction to internalize, to know everyone’s journeys were different so there was no need to compare the milestones in their lives to mine. In summary, regardless of whether you’re years away from the marriage conversation, in the midst of considering someone, or healing from a difficult relationship: you are worth the wait, and that if you trust Allah, make sincere du’a, and continue to work on yourself, He will have something better planned for you. 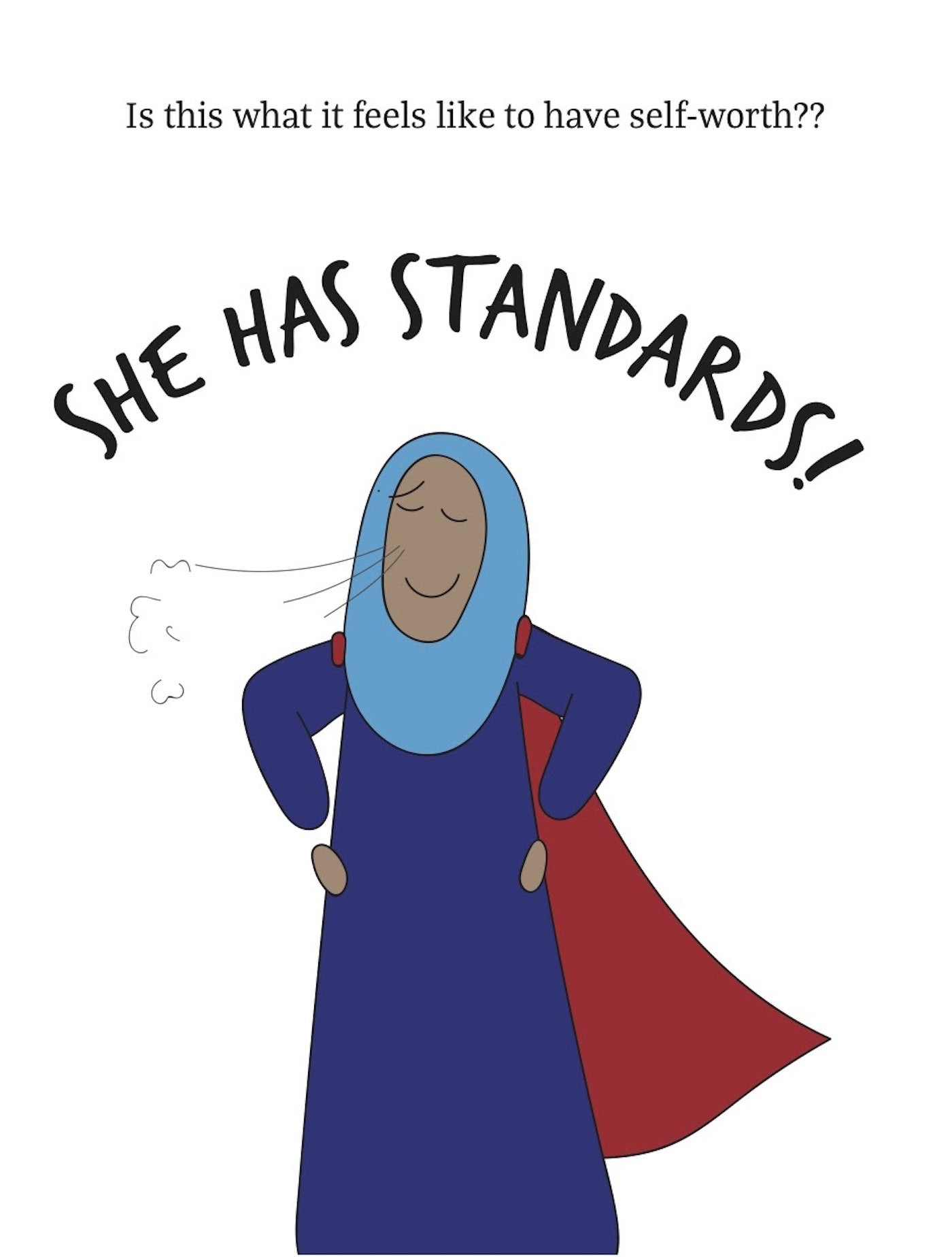 Stories like this are much needed to emphasize not only the humanity and capacity of Muslims to love that’s always existed in a detrimental climate that make them out to be caricatures, but also the weight Islam gives love first and foremost for Allah and His messengers, and then for our families, friends, and community as a whole. So it’s unfortunate that romantic love, the specific type of sukoon (contentment),  mawaddah (affection, love) and rahma (mercy) Allah mentions to have put between spouses in the Qur’an [30: 21], is not brought to the fore often enough in content around Muslims in the West. On a positive note, it’s a gap that the rise of Muslim writers over the past few years have begun to fill.

Another point to mention is that although works in this genre aren’t to be seen as religious texts, but rather helpful ways to understand the experiences of Muslims themselves, Fahmy takes the time to provide a glossary of commonly used terms and explains many concepts in our deen to the unfamiliar reader. For example, she mentions mahr (dowry given from the groom to the bride), the concept of nikkah (marriage contract) and the sunnah of a walima (marriage feast). 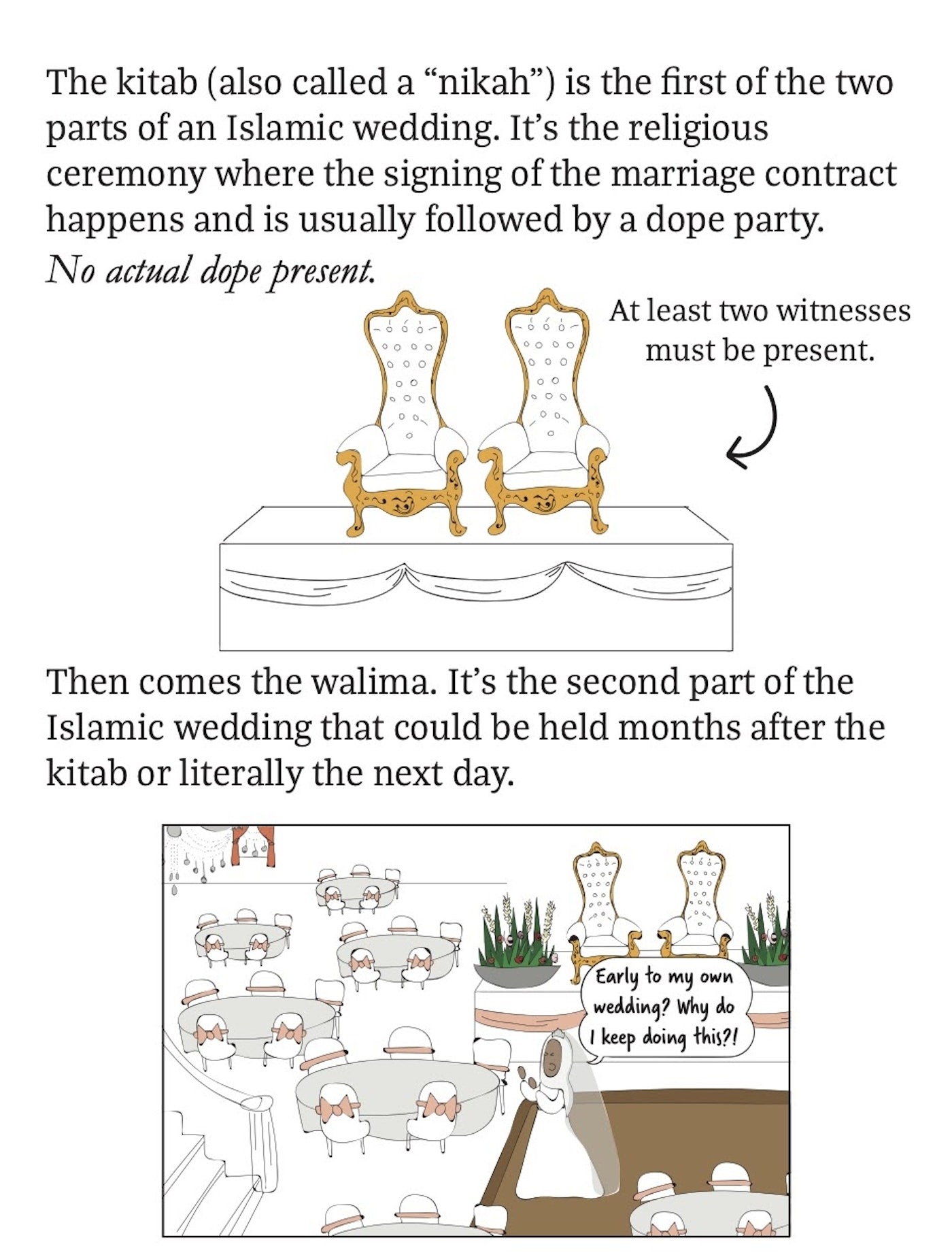 Because of this, it’s an extremely accessible read. Perhaps it’s for this reason that many of her readers hail from outside the Muslim community, and have left reviews mentioning how her book helped in learning about some Islamic beliefs and practices around marriage. Others yet might relate to her experience untangling the religiously-sanctioned courtship process in 21st century America, regardless of background.

Stories told in comic-strip format may not be everyone’s cup of tea, but don’t let unfamiliarity derail you. It’s a fast-paced, light-hearted story that can be read in one sitting that offers plenty of laughs, but doesn’t shy from giving the reader a glimpse into hard-earned lessons. Especially in these trying times, stories ending on an optimistic, encouraging note are much welcomed reminders. If there was one area of critique, it’s that I wish it was longer. I thank the author for the opportunity to laugh, ponder, and learn from her story.

That Can Be Arranged: A Muslim Love Story is available to purchase from Amazon