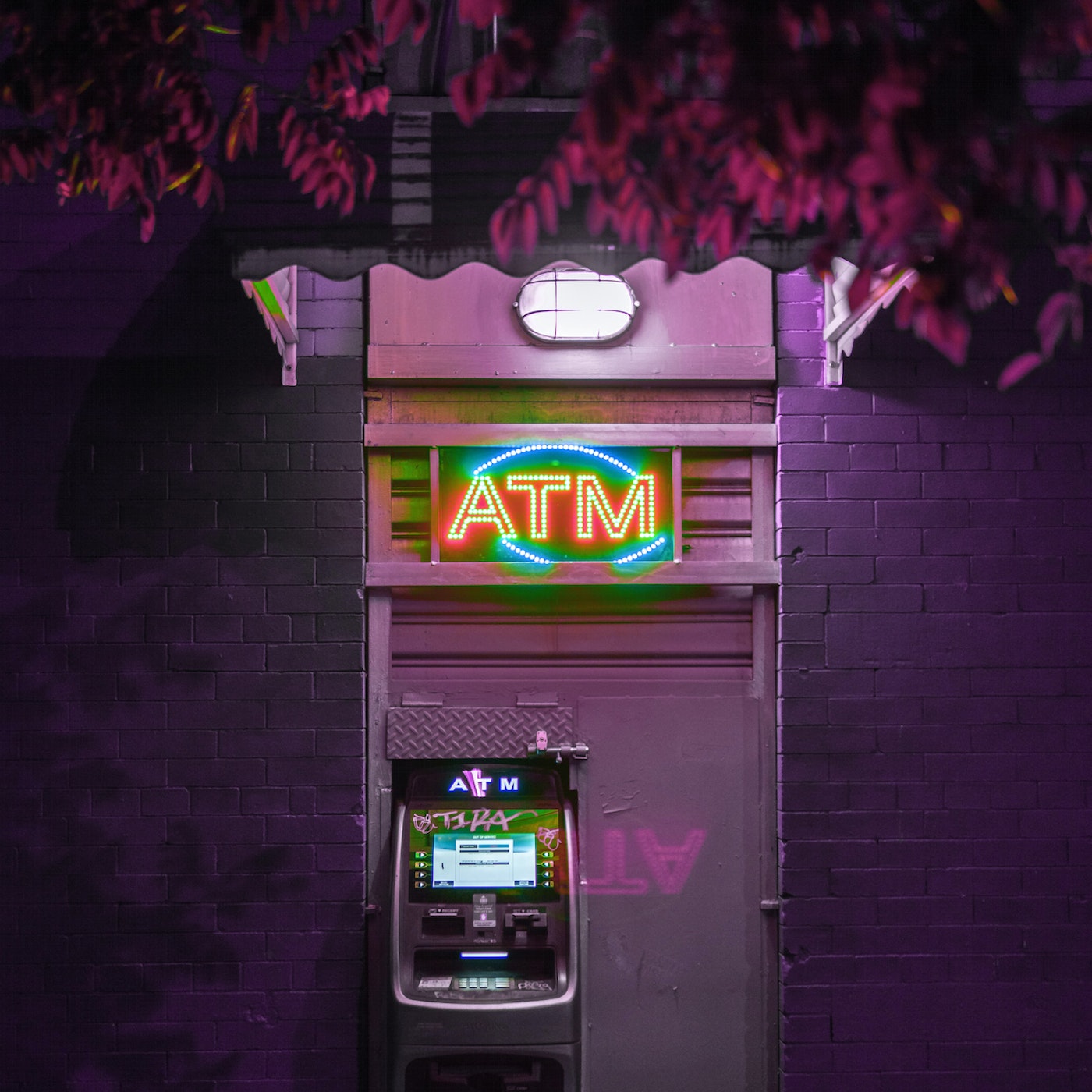 Last week, actresses Gabrielle Union and Gina Rodriguez came together to speak about how as women of color they were consistently underpaid and undervalued by industry heavyweights. Rodriguez spoke about how as POC we often feel as though we should be grateful for even being considered let alone being paid well. Unfortunately, their story is one that spans industries. I’ve had my fair share of being shortchanged, so here’s my unofficial 16 point guide on how to get paid your worth as a person of color.

Last week I had an email pop into my inbox, it read something like this… 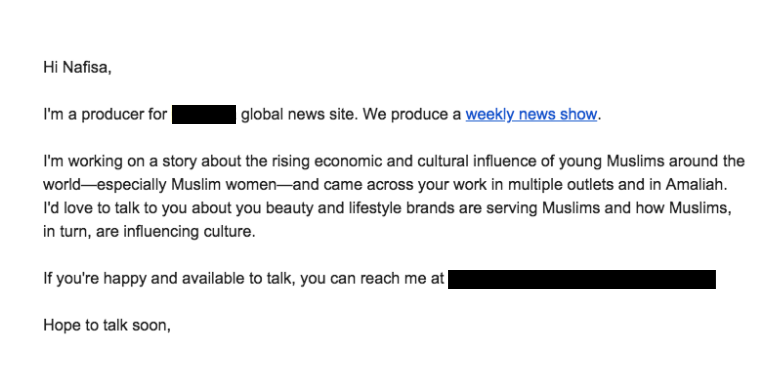 The producer in question is a large media organization whose annual turnover is in the $25 million a year mark. I asked her to send me over questions, to which she sent over about 17, some of them below.

The questions were pretty meaty and topics we often get commissioned on, I was really excited to get down and answer them as I am passionate about the unpicking consumer behaviors and trends, in particular when it comes to Muslim audiences. I find it fascinating how culture impacts consumer decisions and vice versa, but before I got carried away with my answers, I stopped and thought ‘if this is a video interview how will my answers be used?’

I pinged an email to ask if I would be quoted or if this is for general research to which the reply was general research. So in essence, the person in question had tasked me to write a research report, and in exchange, I would not be getting any money or credit and in fact, would have only lost time.

Now, this wouldn’t be the first time that an organization has approached me under the guise of flattery when actually they wanted me to be their free research assistant. I had the same from someone who works at the agency that works for Al Jazeera. 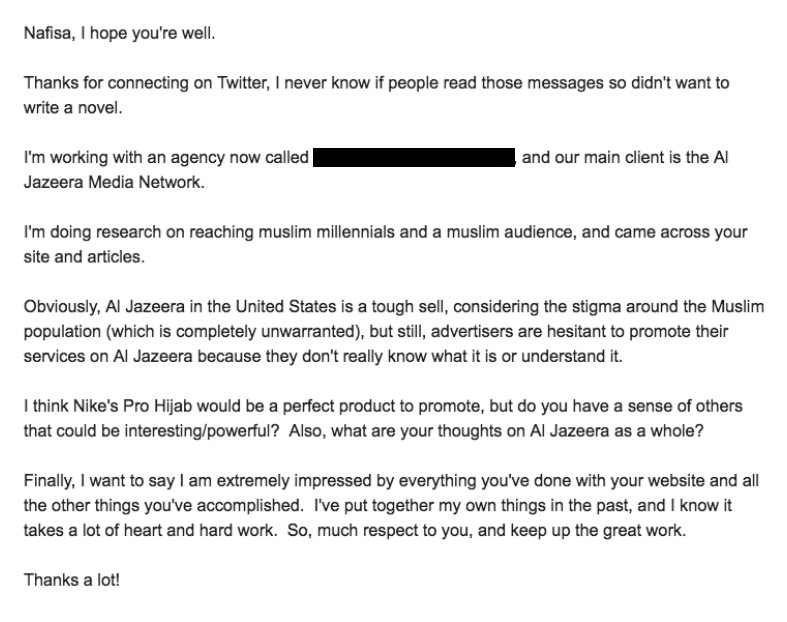 These aren’t isolated incidents, I have many email threads of individuals well aware that they have taken on a project in which they have no expertise and try and outsource the work to someone like me who charges for such services. This is just one of many stories, there are endless stories of people of color being treated as free research assistants by large organizations. Often it is us not knowing the value of our knowledge or being expected to work for free because the work is beneficial to our communities. It’s taken me a while to figure out how to deal with it and the best course of action when such incidents arise, so here’s the unofficial guide to getting paid your worth, because big companies (who already lack diversity), getting people of color to work for them for free is not okay.

1. Know what you do for free

Don’t get me wrong, I’m not just here trying to make money off anyone who wants to meet me. There are instances where I am interested in the project, there is a mutual benefit to both parties or it is good portfolio building, regardless of if money is involved. I have written on large platforms for free, spoken at conferences for free and partnered with companies, but there has been a benefit to both parties. But in the above two examples, both situations would have meant that I am offering insights and a service for nothing but lost time. In the case of the Al Jazeera guy, he would have definitely gone and passed off anything I said as his own work and thoughts. It can be tempting to engage because you think there may be another opportunity that will be paid, I can tell you for free, there is a slim chance that there will be.

2. Know what it is they are asking and identify if it is a service

If the only thing you are getting from a situation is lost time, no exposure, no brand building, no beneficial partnership, no portfolio building, no experience and no fee, it’s time to say thanks but no thanks.

Often as POC we feel compelled to help but just remember, they NEED you, you don’t NEED them.

Here’s another example of someone doing research for a BBC drama which will feature a Muslim protagonist, the researcher wanted to have a chat so as to ensure that the character was representative of Muslim women and not misrepresented. In the email, it doesn’t allude to this being paid work and something I should be grateful to be a part of.

The first step is to let them know that you have identified the service they are asking for and tell them your credibility in why you should be paid to deliver the service. For example, the response could be:

“Thanks for your email – I am eagerly waiting for this to air, how exciting to be working on this!

It’s great that you are doing the much-needed research to be able to shape the character, which is so often misrepresented and lacks nuance. We have worked with a number of brands to improve the representation of Muslim women these include eBay, Marks & Spencer, Stylist, WGSN and Pinterest. You can find our work here.

We are passionate about the representation of Muslim women and dedicate all our work to ensuring it is representative. We have an ear on the ground and with our community have a deep understanding of Muslim audiences who are often represented without nuance. Do you have a budget or a brief we could quote to?

Look forward to hearing from you.”

The key thing here is establishing that you have a service to offer and that you charge.

3. Know how to price your time

Say you’ve been asked to come into do a 1-hour talk, it is important to recognize that you are not just charging for that 1 hour. I also personally add a premium for if it requires me to work on the weekend. In fact, if we’re going there, you’re also charging for the fact that you’ve put in the hours to perfect your craft. 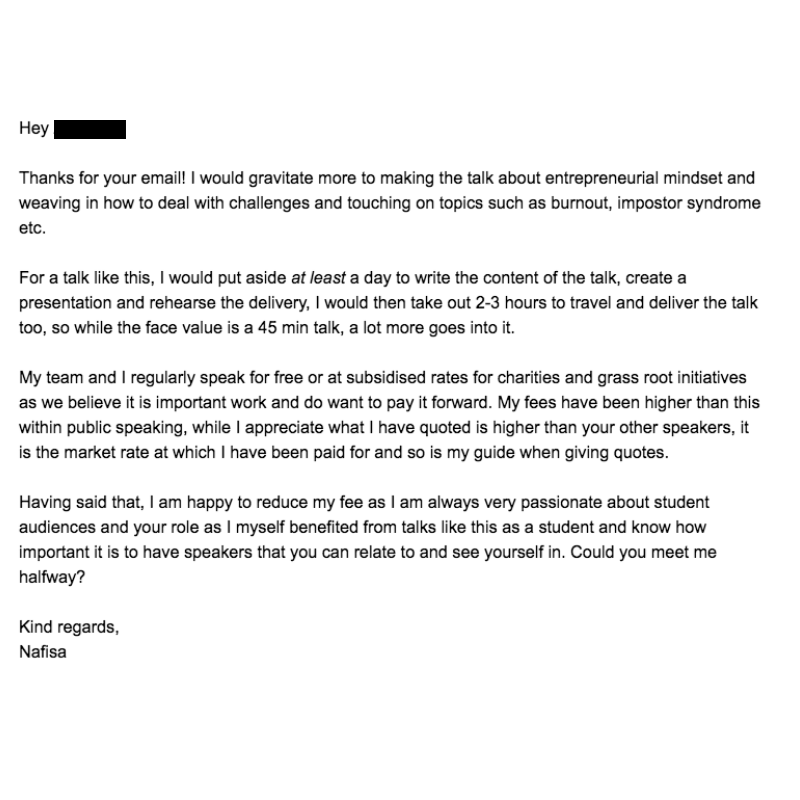 You’ll be surprised how easy it is to get paid when you ask to be. I make it a common practice to ask for a fee, even if I 100% know the answer will be no, I ask. It is good practice and makes it a habit and less of a daunting task. Try:

– Do you have a budget for this?

– Is there a contribution fee?

– This sounds great, I just wanted to check if there’s a fee for this?

5. If you see a number negotiate it

Always negotiate, if there is a proposed fee then my sister’s rule of thumb is double it and add 20%, you would be surprised to see how often it is successful.

– “I would like to negotiate my speaker fee in line with my current rate, so please let me know what you can do on this”

If they come back with a number negotiate it again.

“Thanks for trying to meet me closer to my rate, would you be able to wiggle closer to {amount}, really appreciate it”

7. Know what the tradeoff is if you aren’t getting paid

In the case of the producer that reached out to me, there was literally nothing that I would be gaining. Sometimes it’s okay for there to not be a monetary amount, for example, it may be that you are writing on a platform that has a wide reach, it might be an activity you do because you like what the company set out to do or you may have been able to use this project as a way to gain leverage to get paid work in. Be clear what it is that is being asked of you and how it benefits. If it only benefits the large organization getting in touch, then something has gone wrong.

In the past where the request is unpaid, I have asked for an intro to a department in the company that I feel it would be good to build a relationship with.

“This is usually a service I would charge for, I appreciate there isn’t budget for this particular project, in turn, I would like to ask if [Insert request].”

8. Know how to tell someone that they are taking advantage

One of my key values is “do not make any self-inflicted enemies”, this means always ensuring that I am not intentionally rude. You don’t want to give this person ammo to say “don’t work with x because of y”. You should never feel uncomfortable if someone was to screenshot your email and put it out into the world. Maintain integrity even when you think the other party is taking advantage.

– “This is usually a service I would charge for, my personal policy is to not work with large companies without payment.”

– “While I appreciate you have not allocated a budget to this, my personal policy is such that I do not work with large companies for free”

– “Given that the event is ticketed with tickets costing over £100, I would expect there to be a speaker fee”

Ask others how much they would charge, I believe if we had more knowledge on what others get paid, collectively we could all benefit. I have heard of situations where some have been paid for a panel and others haven’t.

Always ask if there are others involved in the project and who they are. 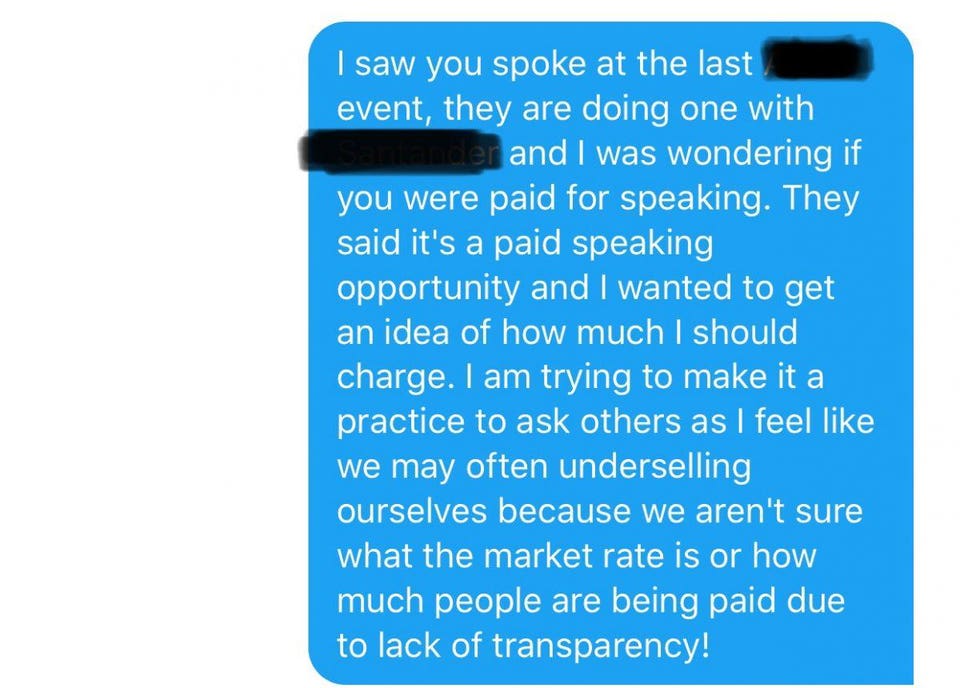 10. Ask who else they have approached

Another reason to ask who else is involved, which is most fitting for panel talks or conferences, is to give you an idea of the budget in terms of the profile of speakers. Also generally if a conference has a sponsor, it is likely they have a higher budget.

11. Do they have a receptionist, a stationary cupboard and engage in billboard advertising?

Rule of Thumb: They have money

Many instances I have said no and then a couple months later they have come back. In some relationships, once you do free work, it is very hard to then work your way to paid work with the same client.

13. Learn the art of following up

Most people are busy, if you are talking about working together, keep following up, I’ve often followed up about 7 times.

14. General rule: If they introduce you to the Head of Diversity it’s a waste of time

This goes two ways and is dependent on how seriously the D&I role is taken. Some do have a significant budget, but in my experience, in the UK, the majority serve as a lip service function and are not taken seriously by the business. Don’t judge me for saying that, judge the system.

Many people do not take POC talks or initiative seriously,  often proven by the fact that it’s mostly POC who attend D&I internal events and you hardly ever see senior management or decision-makers in the room.

15. Don’t be afraid to ask as many questions as you want if you have a gut feeling that something isn’t right here

As a rule, our business doesn’t do discount codes as a partnership deal, as a business, we do not benefit, only our audience does, and while that is lovely, essentially the business is getting to advertise to our audience for free. The same goes for when huge organizations decide they want to do a POC scheme or initiative and get it advertised for free everywhere and anywhere because we should feel grateful that they are addressing us.

This article was originally posted by Nafisa Bakkar on Forbes

4 Ways to Level up Your Finances