Rethinking Our Justice System: Understanding Abolition in the UK 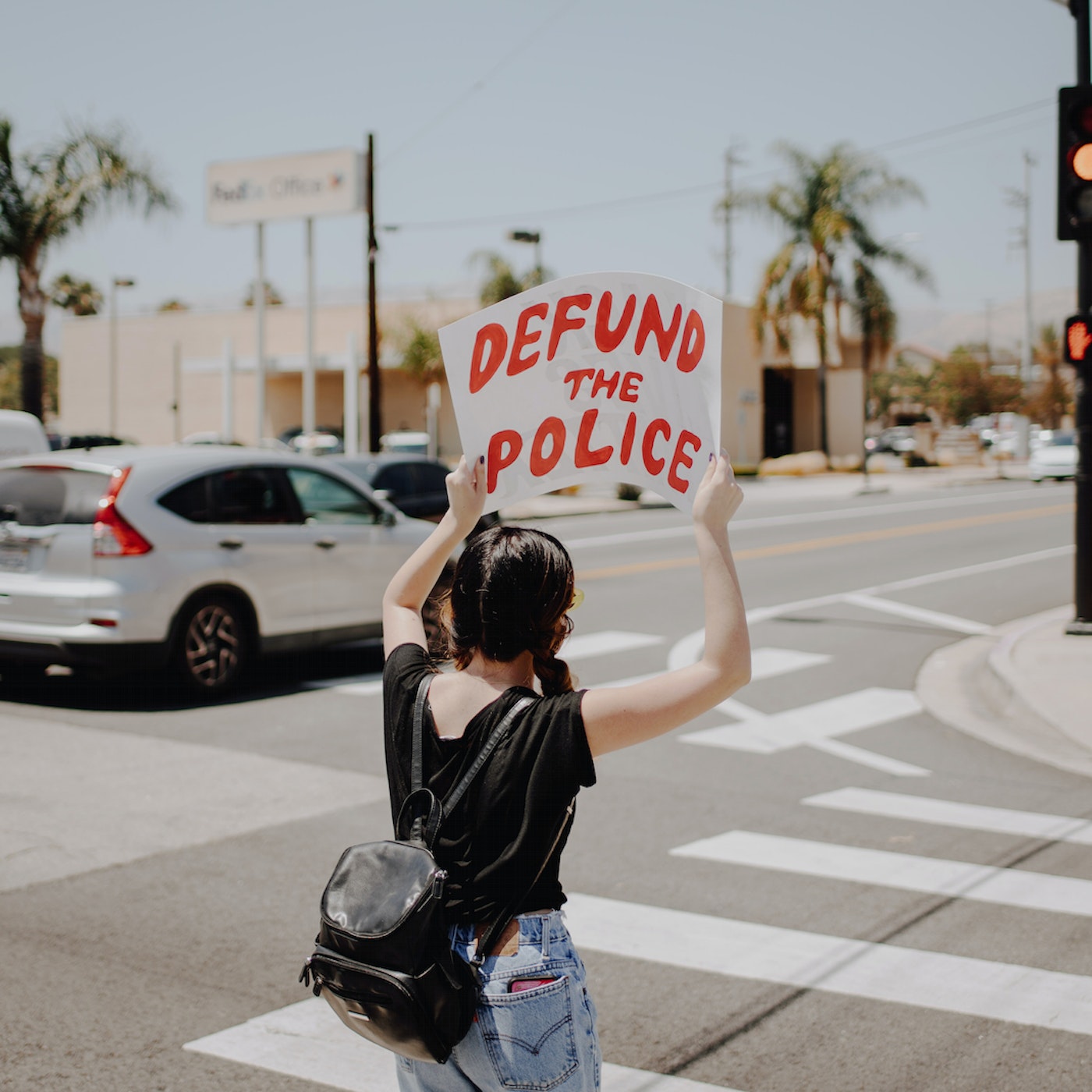 Terms like “Defund the Police” and, indeed “abolition” have been pushed into the mainstream. Activists have been building around it for years. But what does it mean, especially for the UK? And what is the difference between police reform and abolition?

The horrendous murder of George Floyd, at the knees of a policeman with a backlog of brutality to his name sparked worldwide outrage. After days of protests in Minneapolis, the council announced they would disband the Minneapolis Police Department, reallocating funding elsewhere. This announcement is just one of the measures being implemented across US states following nationwide protests – the NYPD will have funding moved to social services, and the city of LA has pledged $250 million would be taken from police budgets and moved into jobs, health and community initiatives.

The case for abolition

Abolition is about working towards a world where the police are not seen as the answer to our social problems. It is NOT about just snapping away the police and expecting everything to be ok, but a process of rethinking how we deal with social issues, from the ground up. This includes priorities and funding – such as mental health care over criminalising people with poor mental health, social support rather than harassing the homeless, gainful employment rather than punishing poverty. During this pandemic we have witnessed homelessness temporarily end in the UK – almost overnight. This demonstrates that no one needs to be staying in the street, and the fact that homelessness only increases every year – with the police deployed to move them along – demonstrates where priorities lie.

In fact, it is not just about police either. It is about the whole system – the massive prisons that make profit from filling beds, PREVENT and counter-terorism, the hostile environment. All of these are interlinked and produce a society that focuses on criminalising and punishing issues rather than actually keeping people safe or dealing with root causes of crime. If they worked, we would need less and less police and prisons over time – not more, as we have constantly seen.

Crime is often seen as caused fundamentally by bad people rather than being understood as the product of a broken society. Policing and punishment takes the place of meaningful attempts at rebuilding society, maintains the system of inequality and creates a vicious cycle of dependency on police to solve our issues – rather than allowing us to formulate wide-ranging solutions to society’s problems. The scope of policing and crime is ever-expanding – now even engulfing our thoughts – with Prevent punishing “pre-crime” (assuming how someone thinks or behaves will lead to them committing an act of terrorism).

And this is where the difference between reform and abolition comes in. Reform focuses on making changes that keep the root structures the same. Abolition says we should rethink and find solutions that work – not just tweak things we already know have failed. One helpful way of thinking about the distinction is: “is what we are asking for now going now going to be something we need to undo later?”

Prison abolition is not a new idea – with organising gaining ground as far back as the 1960s. Key theorist and organisers include Angela Davis (whose book “Are Prisons Obsolete” I highly recommend, and can be accessed here) and Ruth Gilmore. The movement is slightly newer in the UK but great work has gone on. Active groups working on issues right now include CAPE and IWOC.

Naturally, when the question of abolition is raised, people think of the big questions: “What about rapists?” Yet the rape conviction rate is shockingly low at 3%, and the prison environment regularly enables rape and sexual assaults. Clearly the police and prisons are not stopping rape happening, and in too many cases, not delivering the justice suggested they will. Policing was designed and brought in to control society, not to help those in need, it is therefore not a surprise that this flawed system is incapable of helping the most vulnerable. In fact, modern police itself is a reformist solution – designed to be a more socially acceptable alternative to the army to quash political unrest in 19th Century Britain. And this can be said for other concerns – all the systems of crime and punishment in place have not gotten rid of social problems and in many cases they make the issues worse, for example exacerbating cases of poor mental health, or inter-family issues. So should we just continue going as we are? Or does it make more sense to rethink our strategy?

Abolition in the UK?

So what does all this mean for the UK? After all, there have been 1741 known deaths in custody (at the hands of the police) in the UK since 1990 and yet no one has been held accountable for these murders. And it is black people that are overrepresented in these stats – urging us to shout #BlackLivesMatter.

There are so many things we could start to tackle – breaking the cycle of dependency on policing systems. This will allow communities to shape their own priorities and make sure funding is going where it’s needed the most. We’re likely to hear of more concrete demands in the coming weeks from the many activist groups who have already been working on these issues.

1. Removing police from our schools: More and more students today see a police officer walking around their school, and a Home Affairs Select Committee report in 2019 recommended dedicated police officers in schools at risk of ‘serious youth violence’. Already implemented in the US, this has seen pupils being arrested for throwing paper planes and failing to pick up crumbs from the canteen floor. Police in schools, a place children spend so much of their time, will normalise the idea of being policed as an everyday reality and expose children to police racism. It is black and brown children that are likely to be more often and more harshly disciplined, including exclusion.

‘The implementation of schools-based police officers will drive up levels of exclusions from school, as the presence of police in schools risks turning minor behavioural issues into criminal issues. What might previously have been an after-school detention, could now become an arrest or caution’ – Roxy Legane, founder of community organisation Kids of Colour.

But their presence is justified as a form of safeguarding. We have, on the one hand, the police telling us their presence is needed to reduce bullying and yet, on the other hand, we have them completely ignore the calls of justice for the family of Shukri Abdi stating their daughter has been murdered by bullies – dismissing this as accidental. Even by their own standards, they fail to do what they claim they are there to do!

Universities, too, have historically been heavy handed with their students. This includes tasering students or expelling students for peaceful protests. More recently King’s College London provided names of “trouble” students (who it turned out were students involved in Palestinian and climate change activism) to the police and blocked them entering the campus with no warning, ahead of an event.

Students should feel safe and valued in their learning environments and criminalising them does not achieve this.

2. Scrapping stop and search: Officers are allowed to stop and search the public and, black people are up to 40 times more likely to be stopped compared to white people. Stop and searches are for many a constant source of frustration and shame, a regular reminder that their privacy can be invaded at the whim of officers, and a gateway to further police abuse.

“…when we spoke to a group of under-12s they were saying that when the police approach them their heart starts beating fast and they can’t breathe because they don’t know what they’re going to do to them.” (Natasha Dhumma, Youth Coordinator, StopWatch)

Modern stop and search is a reform of the abusive ‘Sus laws’ which led to riots in British cities in 1981. For many young black and brown people, their first encounter with the police is being intimidated by them during a search. In my case, it was witnessing this happen, feeling helpful and a deep anger that made me start to distrust the police. My estate has had a long history of the police not turning up when you need them, and turning up in massive numbers when you don’t.

All stop and search does is cause tension at best, and lead to deaths at worst, with no evidence that stop and searches has worked to reduce crime. In fact 90% of searches lead to nothing – that is 9 people out of 10 harassed for no reason – and even arrests are likely to be for issues such as cannabis possession or resisting arrest while only 3% of stop and searches uncover a weapon – what a waste of public resources!

3. Abolishing Prevent and counterterrorism: Over the last two decades, counterrorism policies have exposed Muslims to near unprecedented levels of surveillance. The Prevent strategy is itself a ‘reform’, brought in to softly infiltrate communities when people pushed back on the heavy-handed raids and police brutality that terrorised Muslim communities. Now forced upon all our public services – even doctors and nursery teachers are expected to report suspicious behaviours. With social biases at play, over reporting takes place and only 5% cases moved on to the next phase of the programme (Chanel) in 2017/2018. The other 95% are harassed and vilified for no reason.

And even for those not directly impacted, the fear of being referred impacts the choices and behaviours muslims and people of colour feel they can make.

“Students admitted to me that they avoided picking modules where they would have to engage in topics such as human rights and counter-terrorism, out of fear of being referred to Prevent. Equally they were worried about expressing opinions on anything from increasing racism in the UK to the legality of the Iraq war.” Ilyas Nagdee, NUS Black Students Officer

A new iteration of the Counter-Terrorism and Sentencing Bill (currently in House of Commons) allows the police to put you under house arrest, move you around the country, monitor your electronics and/or tag you on mere suspicion – indefinitely, and without having to actually put you on trial. Given the horror stories we have heard from kids mispronouncing cucumber to taxi drivers with the Quran on their mirror both being reported and investigated, we should think about the disastrous impact this will have on people’s lives. The thinking behind Prevent has been debunked by experts for years, and yet it is pushed out as a ‘nice’ way to be able to surveil and control whole communities – mostly Muslim.

This just names a few of the issues we should be campaigning around in the UK. Money saved can be better spent on youth centres, mental health provisions, building of community spaces, support for young mums, relief for people impacted by violence, affordable health care, safe injection sites. The list goes on! All of these support people, actually changing people’s lives for the better without trying to deal with crime once it has already taken place.

Check out Abolitionist Futures for loads of further resources, and weekly summaries of what is going on. We will also be restarting our reading group on 30th June – signing up details on the website.

Hajera Begum is a full-time plant mum and also works to increase access to Higher Education for refugees. She is part of Nijjor Manush, an independent campaigning organisation that aims to educate, empower and organise Bengalis and Bangladeshis in the UK. She is also part of Abolitionist Futures, a collaboration of community organisers and activists in the UK and Ireland who are working together to build a future without prisons, police and punishment.