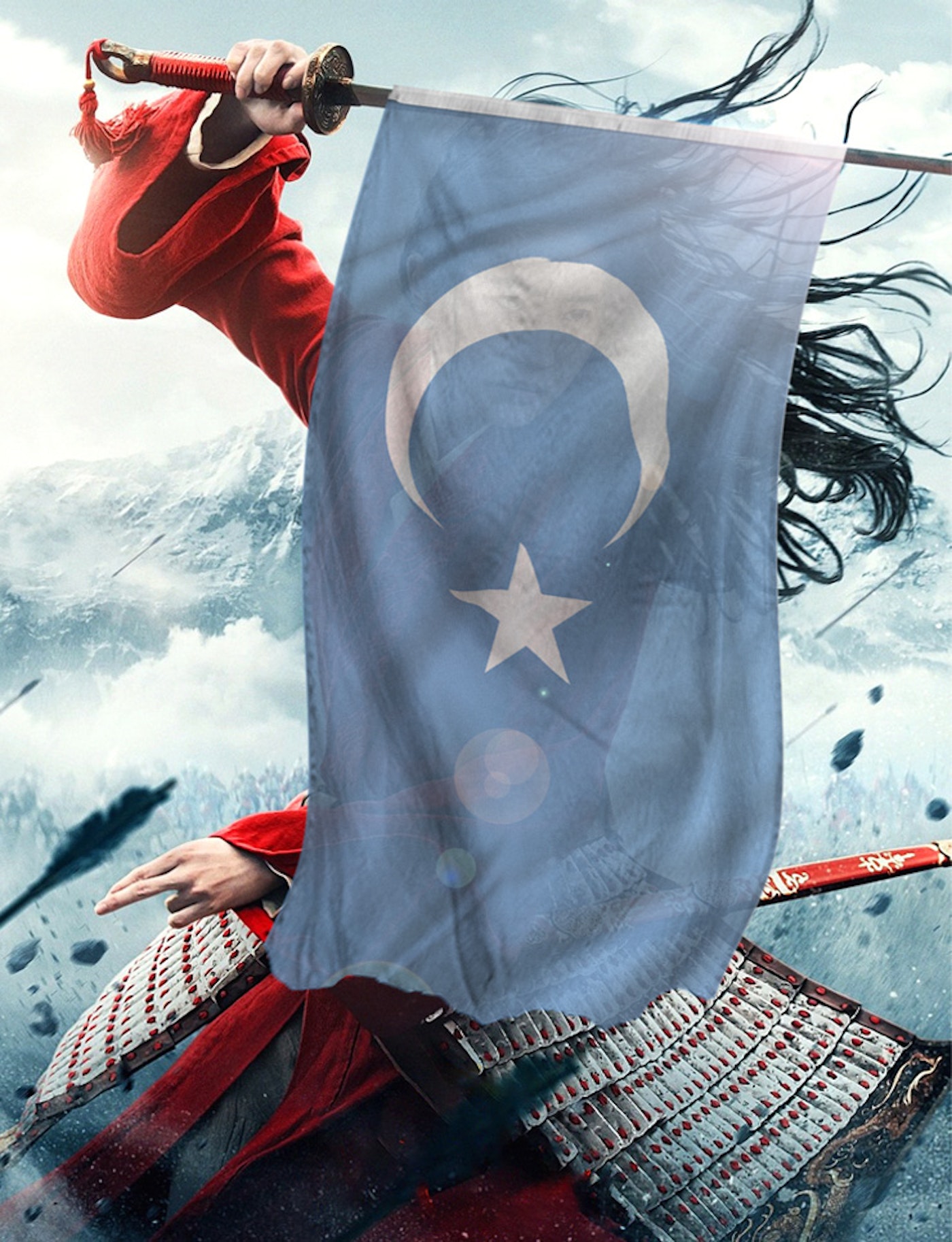 …Or How To Unpack The Experience If You’ve Already Seen It.

It’s not the way you expected it to go. After a long wait and months of anticipation, Disney’s new Mulan movie was finally released. All children in your household rejoiced. And like all things Disney, you consider that having to listen to the same songs for the next three months will be your most significant concern with this remake. And oh, if only it were so.

You’ve heard this word before, but what does Disney’s new movie have to do with the oppressed Muslim Uyghur population and why does it mean neither you nor your family will be streaming it, and more pressingly, how will you explain it to your kids?

Disney could have filmed the new Mulan in any gorgeous location or soundstage in the world, but they chose to film it in a place that is being used for extreme human rights violations, in view of no less than seven internment camps and working closely with the same government bodies responsible for forcing the minority population into labour camps, sterilization and organ harvesting. If this sounds like a genocide, that’s because it is.

And it’s these very same government organisations which Disney thanks in their credits. All of them. Just above their seal of approval from the American Humane Society, verifying that no animals were harmed in the making of the film.

Neither Disney nor the Chinese authorities have responded to requests from human rights organisations requesting due diligence reports in the making of the new Mulan movie. Nor have they answered questions about what agreements were made in order to do the filming, and what help the authorities gave them. Here is a good summary of the many reasons Disney’s decision is deeply disturbing but the question remains, what to say to the kids waiting to watch this movie?

No matter how you speak in your family about issues of social justice, it’s always best to be truthful, open, and to try to keep things simple. Because it’s sometimes easier to have the words to say, I’ll share my own throughout this post. Here’s how I managed to ‘break the news’ about the film:

“I learned something today that really saddened and angered me. It’s about the new Mulan movie and I think we need to talk about whether it would be right to still watch it. I found out that Disney, the company that made it, chose to make this movie in a part of China where the government is doing horrible things to actively erase the lives, culture and complete identity of an entire group of people who live there…”

Accept All Feelings Without Judgement

Yes, it’s just a movie and yes, children and families deal with more serious issues the world over. After all, even the fact that you are able to pay for and stream this movie on demand is a privilege. But disappointment, frustration and even anger are all valid ways to feel when your excitement and anticipation for something is suddenly quashed. And it’s especially hard for your child when you are the one doing the quashing.

For children, feeling seen and heard is vital:

Acknowledge that they were really looking forward to watching this movie.

Admit that it is disappointing not to be able to do so.

Understand that abrupt changes in plan can feel unfair Here are the words I used:

“I know this seems very sudden and that we’ve been looking forward to watching this movie together for a long time. I can see how disappointed you are that we won’t be able to watch it now. It does feel sad and frustrating when we’ve planned to do something and then aren’t able to fulfill that plan.”

Affirm That People Are More Important Than Things

After all that, it is just a movie, and putting things in context is always essential.

If you haven’t yet spoken about ethical consumption with the children in your life, now is the time to discuss how a motion picture made to entertain us for a short moment will never be more important than the real people harmed by those who made it.

“Even though we really wanted to watch the new Mulan, it’s a movie made for fun and enjoyment. It’s not real. But the people who made this movie are real. Real people are being hurt and real families are being destroyed. Is it more important for us to watch a made-up movie or for us to call for the safety and freedom of real people?”

Discuss Who Has The Power

Will boycotting the new Mulan movie change anything at Disney? Probably not. Will it directly affect the profits of a multi-billion dollar multinational or cause them to rethink their relationship with oppressive regimes? It doesn’t seem likely. So then, why bother boycotting this movie? What difference will it really make?

These are all significant questions and ones that your children may ask you. With my own children, who are still very much kids and not teens, I like to keep it simple and focused on our own intentions and actions.

Ultimately, we are choosing not to watch this movie because we don’t support the way it was made. We are reminding ourselves that it’s important for us to investigate where things come from and to make our own choices in regards to them – essential learning they can call upon when other kids say how much they loved the movie.  Who has the ‘Power’ in this dynamic? Where is the ‘Conflict’?  Was any Harm done in the process of getting this thing to us? (For all words in bold refer to this excellent list to create deeper understanding of terms using kid-friendly definitions)

In our ongoing quest to be conscious citizens and families who stand against oppression, the best place to start is in our own homes.

“These decisions can feel difficult but actually, they’re quite simple. We’re choosing to not watch this movie because we know that making it meant supporting the oppression of the Uyghurs in China. We never want to support or give parts of ourselves over to things that cause harm to other people. In this case, that means not giving the new Mulan movie our money, our time or our imagination.”

You’ve discussed what you’ve decided you can’t do, so now give some thought to what more you cando. Boycotting the new Mulan movie is an immediate action and one that has, by this time, led you and your children into a deeper conversation about oppression, personal responsibility and developing a moral compass which informs all aspects of life – even the fun bits.

Here again is a chance to develop your child’s social justice vocabulary – words such as power oppressed conflict  – can all be found in our printable pdf here.

But, now that you know more about the oppression of the Uyghur people, your children may want to figure out if there is something else they can do to help. This noble impulse comes so easily to our young people and it’s up to us to validate their good intentions, foster their desires for social justice and introduce them to a variety of ways in which to affect change.

Start by learning more about the plight of Uyghurs and support the organisations and people already working to bring justice. The Stand With Uyghurs website is an excellent place to petition, advocate or donate to the effort. For example, did you know that over eighty multinational companies use forced Uyghur labour to manufacture their consumer goods? Learn more about forced Uyghur labour here.

“If enough people choose not to watch the new Mulan and speak about why they’ve made that decision, it can raise awareness about what is happening to the Uyghurs in China. But we can add to this by signing petitions and writing letters to show big companies how uncool it is to work with oppressive regimes and make other big companies think twice about working them. This is the power of the people and in the past, this ‘people power’ has affected big changes in our world.

The  Uyghur people want to live safe, healthy lives, together with their families. They want to be able to practice their religion, and live their traditions  – without feeling threatened or scared to lose them. These are all basic human rights that all people everywhere want to have.  Just like we want for ourselves.”

Finally, you still want to kick back together, grab some popcorn, and get lost in a movie, don’t you? Well, we have you covered! Why not try one of these amazing films instead, all featuring an awesome heroine of colour.

A Wrinkle In Time

Akeelah And The Bee

Aiysha Malik is a photographer, writer and award-winning designer. In 2016 she founded mamanushka.com, a popular lifestyle blog devoted to the experiences of being a mother and Muslim woman of colour. Originally from Canada, she now lives in the UK and has spent the last decade experimenting with how to build capable communities whilst maintaining the joy in life. Follow her work and inspirations on instagram @goodonpurpose

On My Bookshelf: The 40 Rules of Love Book Review