by Selina Bakkar in Lifestyle on 9th September, 2021 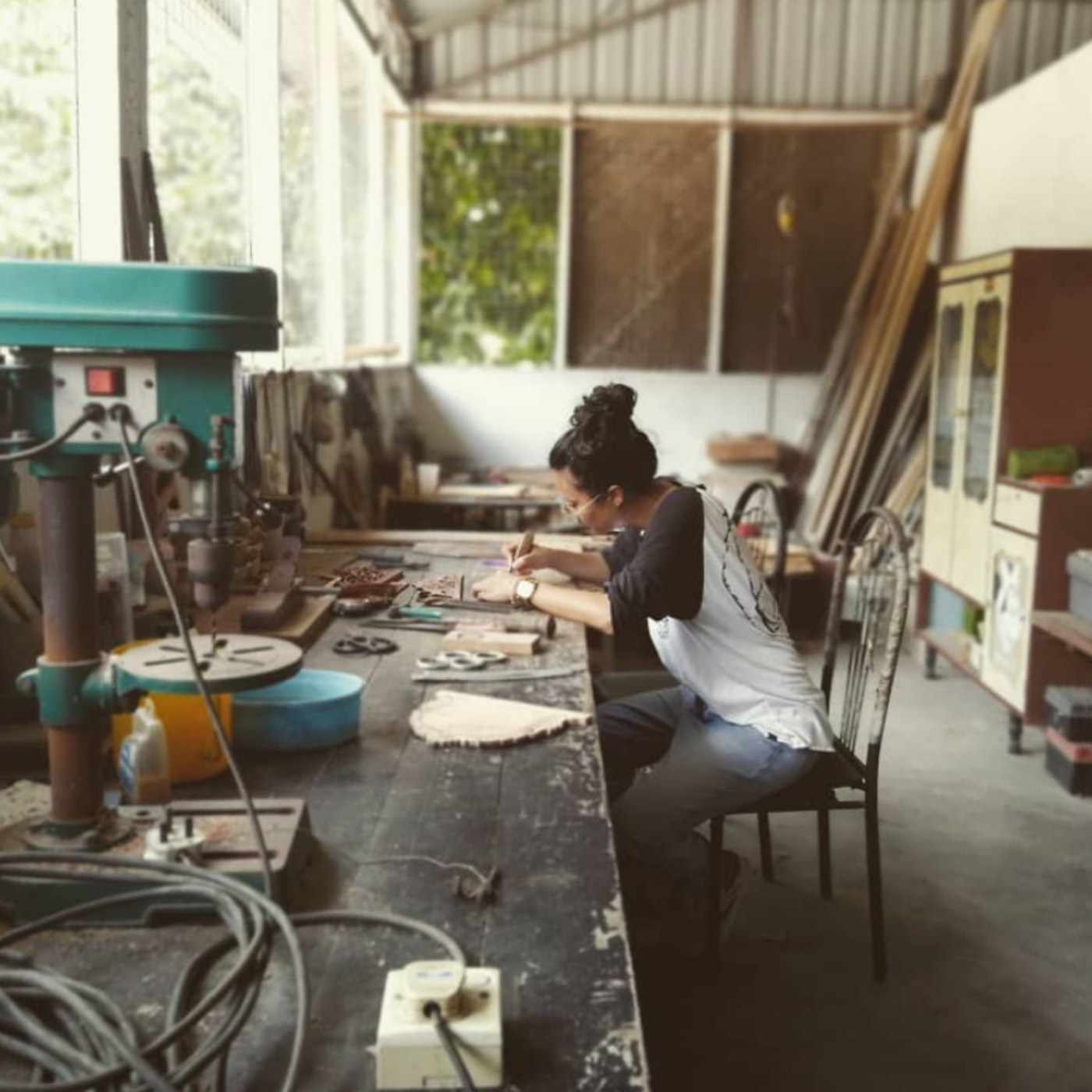 At Amaliah, we’ve started a series talking to women who are championing the art of hobbies. This time, we’re speaking with Nur Hannah Wan.

If you would like to interview a Muslim woman about her hobby, get in touch on contribute@amaliah.com

What do you do and how long have you been doing it for?

I paint and make documentaries focused around people, places and community. My first love has always been art – I’ve been drawing and painting for as long as I can remember, initially just sketching things around me. I moved into journalism and documentary filmmaking formally around 2012.

How did you get into this hobby?

I feel like I’ve been into painting and sketching before I really knew how to do anything else – not so much for the outcome but for the process of touching and feeling something with my bare hands. I went on to study design & printmaking at university but upon graduating, I was selected for a broadcast journalism training course. This opened my eyes to another way to capture moments and tell stories, so I just went with it – 9 years later, it’s this that has allowed me to travel around the world doing what I love.

What was your first memory of art?

I have a random memory that sticks with me: I was always making things as a child and had once, maybe aged around 8 or 9, decided to make some kind of contraption that resembled a polaroid camera, using a cardboard box and tape. It had a view finder and buttons that I had drawn on – of course it didn’t work, but I told my childhood friend that we should try and convince people that it did! She asked about the photographs it was supposed to produce – as a real polaroid camera would – and I simply told her we’d draw them! I remember her looking at me as if I was crazy and she was a bit confused as to how we were going to draw anything that would resemble anything close to a photograph; but it didn’t occur to me that I couldn’t do it. At that age, I probably couldn’t! But that memory sticks with me because it tells me that even before I had the skill to draw anything realistic, I could already picture myself doing it. In fact, I was perplexed that my friend thought she couldn’t! Of course, today, my portraits are very much inspired by Realism. It sounds cheesy, but I guess the lesson here is to believe in yourself…even when the world think you’ve lost it! If you can picture yourself doing it, then you can!

What is your favourite thing about what you do?

The opportunity to just sit back and watch life happen around you – I’m a people watcher. This process is characteristic to both my art and documentaries. Take filmmaking, for example: before any of the capturing commences, you have to just sit back and really observe what’s going on – you watch, let life just unfold and essentially try to make sense of it all. This is all part of the narrative crafting process – I appreciate that my work allows for these moments of reflection and contemplation on life, people and human interaction. On a good day, you can move around unnoticed and it’s really interesting the things you see and hear when people think no one is watching.

If it’s not a camera in my hand, it’s a sketch book and pencil, but I’m essentially doing the same thing – observing.  I usually love to sketch in transitional spaces – places that people are just waiting for something to happen i.e. on the train, moving from one place to another, or at the airport, waiting to catch a flight.

I guess this is the thing that ties both my artwork and documentary together – being inside of the ‘action’ but choosing not to participate or become emotionally involved. Life can be so hectic and fast paced that there is something liberating about just watching from the outskirts, whilst the madness just unfolds around you.

What is the most challenging thing about doing what you do?

Contrary to my previous answer, being at camera length from everything or at such a distance from your surroundings can also be a hindrance to your work, especially in documentary, when you’re trying to capture raw and honest emotions and stories. Whilst it is important to sit back and move around unnoticed, you also need to earn trust and respect from the subjects of your stories, and this can be difficult to do when you’re moving around with your face behind a camera. If that’s all you’re doing, you can come across as very impersonal and detached, and subsequently, your stories will be exactly this. In my work, especially in the NGO sector where I’m capturing quite sensitive and traumatic stories, it’s really important to sit and breathe with people; to make eye contact and let people know who you are as a person too. People are sharing their stories and connecting with you as a person, and it can be rude not to be receptive to this and express this in your mannerisms and behaviour. I guess the challenge here is trying to balance being human and a camera at the same time.

How do you stay motivated?

Human connection and conversation are some things that keep me fulfilled and inspired in my work & life, so I try to prioritise this. Editing and painting are quite isolated roles where it’s just you and your computer screen or canvas – I work best this way, but when you’re so engulfed in an edit or art project, you can go days without speaking to a single human soul. Life is about human connection – If I’m bored of talking to myself (which I do a lot of), I’ll go out for a cycle, meet old friends, make new ones and sometimes have some random conversations with people I’ll probably never meet again. Of course, these are the things that directly inspire my work, but aside from that: community, good company and conversation just generally keep me energised and motivated to wake up the next day and do what I do all over again.

What is the work you are most proud of, and why?

I have a few things that I’m proud of. In 2018, I had a water colour portrait exhibited with the Royal Institute of Painters in Watercolours. It was a portrait of my brother, sitting in contemplation on a cold winter’s day, just before he had set off for a long trip back home. I hadn’t intended on submitting this piece for competition – it was just something I’d casually painted, but it got through – and it meant a lot because I had tried for this competition back in 2010, after graduation, and was unsuccessful. The success, eight years later, just encouraged me to hold on to my art, even though I had progressed into a different career, and it really showed me that anything is possible.

I recently spent the last couple of years on the east coast of peninsular Malaysia, in a coastal fishing town called Kuala Terengganu – this was my father’s hometown growing up. Though I relocated here from London quite unexpectedly, it gave me some time away from the hustle and bustle of London life, to really absorb my Malay culture in a way I’d never done before. My late grandfather’s village was located here, but the whole place had been demolished a few years prior to make way for ‘developments’. There was one last house in this village – a beautiful traditional kampung house – and my arrival just happened to coincide with the final phase of demolition and the end of this village. I watched and documented as they pulled down the last house; this fragile, wooden thing with its beautiful and rare red singhorra tiles, that came crashing down before my eyes at the hands and teeth of a government funded bull dozer. This was my last real connection to my late grandfather here, and the whole thing was so emotional, I couldn’t even write about it – but I felt like God had placed me here just in time to witness the whole event. It sparked in me a mission to document and archive all of the traditional Malay heritage this place was so rich for, which was also dying out due to regeneration i.e. batik painting, musical traditions & shadow puppetry (wayang kulit). I shared my videos via a series called nusa culture – I’m proud of this body of work as it came from such a personal place, but I could see from its impact online that this mission meant a great deal to other people too, and that’s what I’ve always wanted to do – make things that move people.

Between your hobby/business and work, family, personal errands etc. how do you organise your time and make sure that you’re staying on top of everything?

This is a tough question! As a freelancer, my routine is naturally never the same, so there is never one system. I take everything as it comes, and there’s a lot of trial and error in my process. If I have a busy month, I also try to make sure it’s not blocked out with just work. I try to make sure my calendar has room for family and social life so that I don’t burn out.

What would be your advice for someone that wants to go into film making?

Make things that are meaningful and important to you. When something moves you, you put your heart and soul into it and this always shines through. I guess what I’m saying is to be honest with your work and intentions – if it resonates with others, that’s a huge bonus, but make things for yourself first. That’s where you find your own voice.

Save a Life, Save Mankind: British Islamic Medical Association Putting This Verse Into Action

In Our Arms: The Zine Project Exploring Sex for Muslim Women