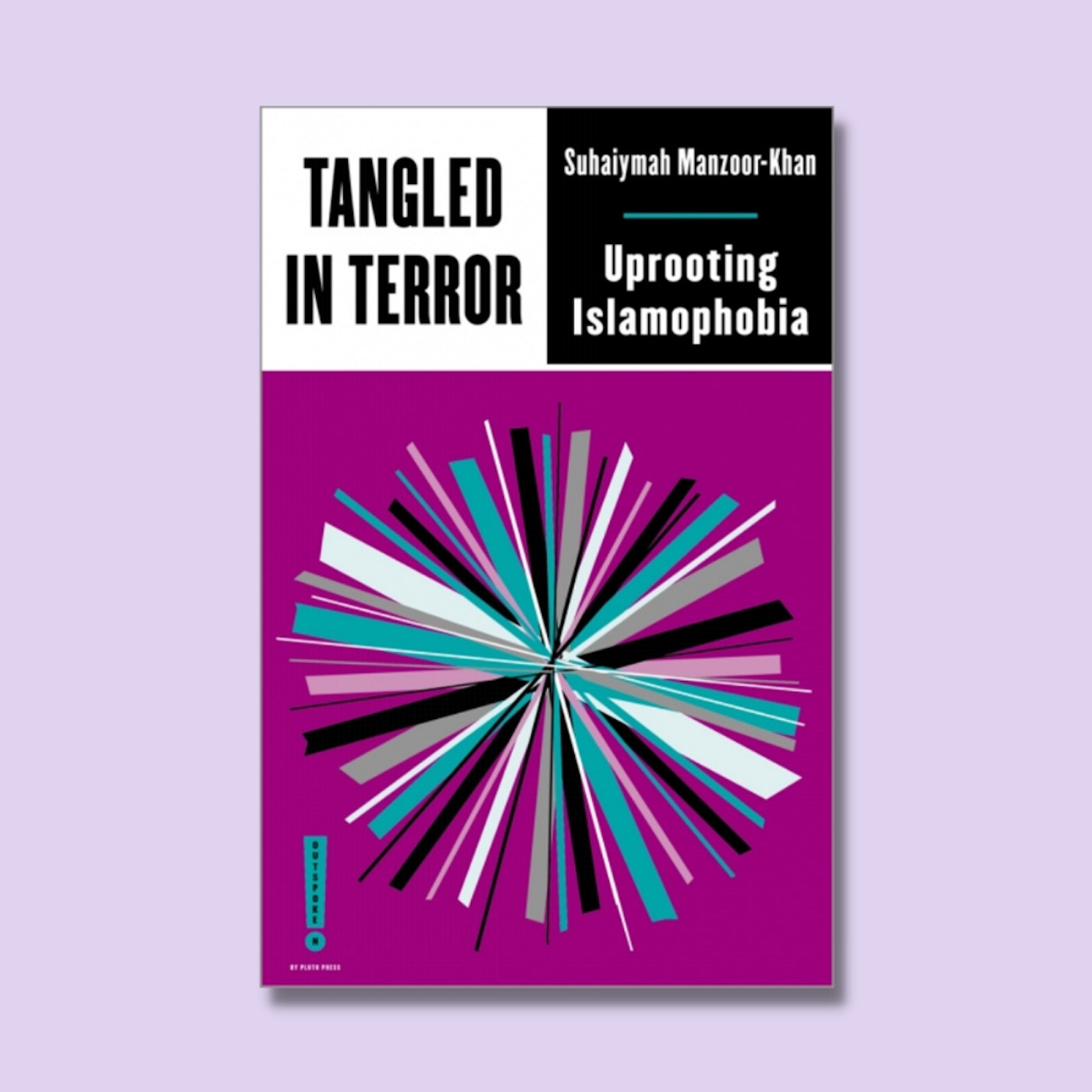 For the vast majority of Muslims, Islamophobia forms a part and parcel of everyday life. From education, healthcare, the legal system, to the workplace, Islamophobia has permeated all aspects of life. I know for me, it has become such a routine part of life that there are many moments I don’t even notice it rearing its ugly head anymore. It’s as if my mind is simply saying, this is normal for you now. But it isn’t normal. Islamophobia may be an increasingly normalised form of violence in our society but it shouldn’t be a normal part of our lives. It’s also not a form of racism that should be relegated to online discourse or ‘debates’ over microaggressions or what constitutes Islamophobia in the first place. This is the main argument that  Suhaiymah Manzoor-Khan’s new book, Tangled in Terror, aims to dissect, making us think about what Islamophobia does and not what it is.

Tangled in Terror delves into how Islamophobia is not just a ‘Muslim problem’ that only ‘lives under the skin of those who it marks’, but a divisive political tactic that was created to materially benefit international stakeholders and corporations. If anyone is suited to write a book like this, it’s Manzoor-Khan. A writer, poet, and educator that prioritises disrupting our understanding of the world and encourages us to imagine a different reality, Manzoor-Khan applies the same approach to her latest work. In some of her previously published work such as her poetry collection, Postcolonial Banter, Manzoor-Khan brought us incredibly powerful poetry that managed to weave important political conversations into artistic flair, something that is also evident in this book.

Tangled in Terror begins by outlining the origins of the ‘Muslim threat’, looking at the history behind this invention, the purpose it serves, and why it was created in the first place. There is a detailed discussion of how Muslims have been othered in order to uphold the power structures of white supremacy over the centuries, using the infamous example of Lord Cromer during the British colonial rule of Egypt to untangle how and why Muslims became the ‘Other’, and consequently, a threat to ‘civilised’ Western society. The second chapter then breaks down how Muslims have now become a security threat, synonymous with terrorism and violence, due to the global War on Terror created by Western nations to justify global oppression and exploitation. Manzoor-Khan also sheds light on how the War on Terror has also been used to justify resource theft from nations as well as the big business gains behind it.

The next few chapters take a look at Islamophobia and borders as well as the ‘policing of the Other at home’, both involving the surveillance, control and criminalisation of Muslims. Manzoor-Khan unpacks the terrorism legislation in the UK – including the 2006 Terrorism Act and Prevent – revealing the specifics when it comes to its targeting of Muslims and the widespread harms it causes our communities, and beyond. Chapter 5 then turns to how the ‘Otherness’ of Muslims is seen as being in direct opposition to British values, and so their exclusion from the nation justified, with the ‘parallel lives’ narrative discussed and these supposed British values unpacked to reveal the racism and violence that lies beneath them.

Tangled in Terror also discusses the Good/Bad Muslim narrative so many of us have become familiar with, looking at how states have coopted Islam to serve their own purposes, whether that be through Muslim communities policing themselves, or through the acceptance of a Westernised form of Islam. The aptly named penultimate chapter, ‘The feminist and queer-friendly West? The patriarchal rest?’, explores the notion that the West is liberal in its thinking and approach when it comes to marginalised groups such as women and queer people, but that Muslims are not.

In the case of Muslim women, Manzoor-Khan thoroughly explains the gendered Islamophobia of the West, viewing Muslim women as inherently oppressed and Islam as their violent oppressor. She also elaborates on feminism’s collusion with Islamophobia stating that ‘mainstream feminism often pitches equality on neoliberal, imperialist and ethnonational terms’ (p.142). She goes on to write that ‘It [mainstream feminism] celebrates women fighting for state militaries, taking up positions in imperialist state governance or becoming CEOs for corporations that exploit the labour of women in the Global South.’

Manzoor-Khan concludes with a chapter that opens with ‘Islamophobia is not and was never about Muslims’ (p.163). She encourages readers to analyse and think more deeply about Islamophobia and its structures in order to see that we need to completely uproot and demolish Islamophobia, and not just lessen its harms and effects. Something that seems entirely possible by the end of reading this book. She also encourages us to think and imagine a different world where all forms of structural violence, like colonialism and capitalism, have been eradicated and replaced with full public investment into health, education, housing and wellbeing resources. Something else that seems entirely possible.

Manzoor-Khan’s ability to articulate complex discussions in an inclusive way ensures the reader – of any background – is able to properly digest and engage with the topics of conversation. Books that tackle such large political subjects can sometimes carry the risk of it becoming too convoluted in tricky academic language or theory that can alienate some readers, but this is not the case with Tangled in Terror. Manzoor-Khan guides her readers through the conversation with ease and understanding so that anyone interested in learning more about Islamophobia and its political intricacies is able to do so.

Tangled in Terror is an essential book, not only for Muslims but for anyone wanting to learn and understand more about the roots and current reality of Islamophobia. It’s an enriching and insightful read into what discussions around Islamophobia should be focusing on and where our energies should be prioritised. In the face of so much division and hate, it’s also a book of hope. Hope that a different world built on our terms can, and is possible.

Shahed is a writer and journalist focusing on political and social issues, especially issues that are marginalised and under-reported. One of these issues being that of Islamophobia. As a Muslim woman, this is an issue very close to her heart and something she’s committed to amplifying and sharing with the world. Shahed has written for a range of publications such as: HuffPost, Vice, Tribune, Stylist, and gal-dem. She’s also the Deputy Editor of Aurelia Magazine, an independent publication that platforms the thoughts and feelings of marginalised genders.

7 British TV Shows Reflective of Real Life in the UK