Anti-Blackness, Dehumanisation and Hypocrisy in the Coverage of Russia’s War on Ukraine 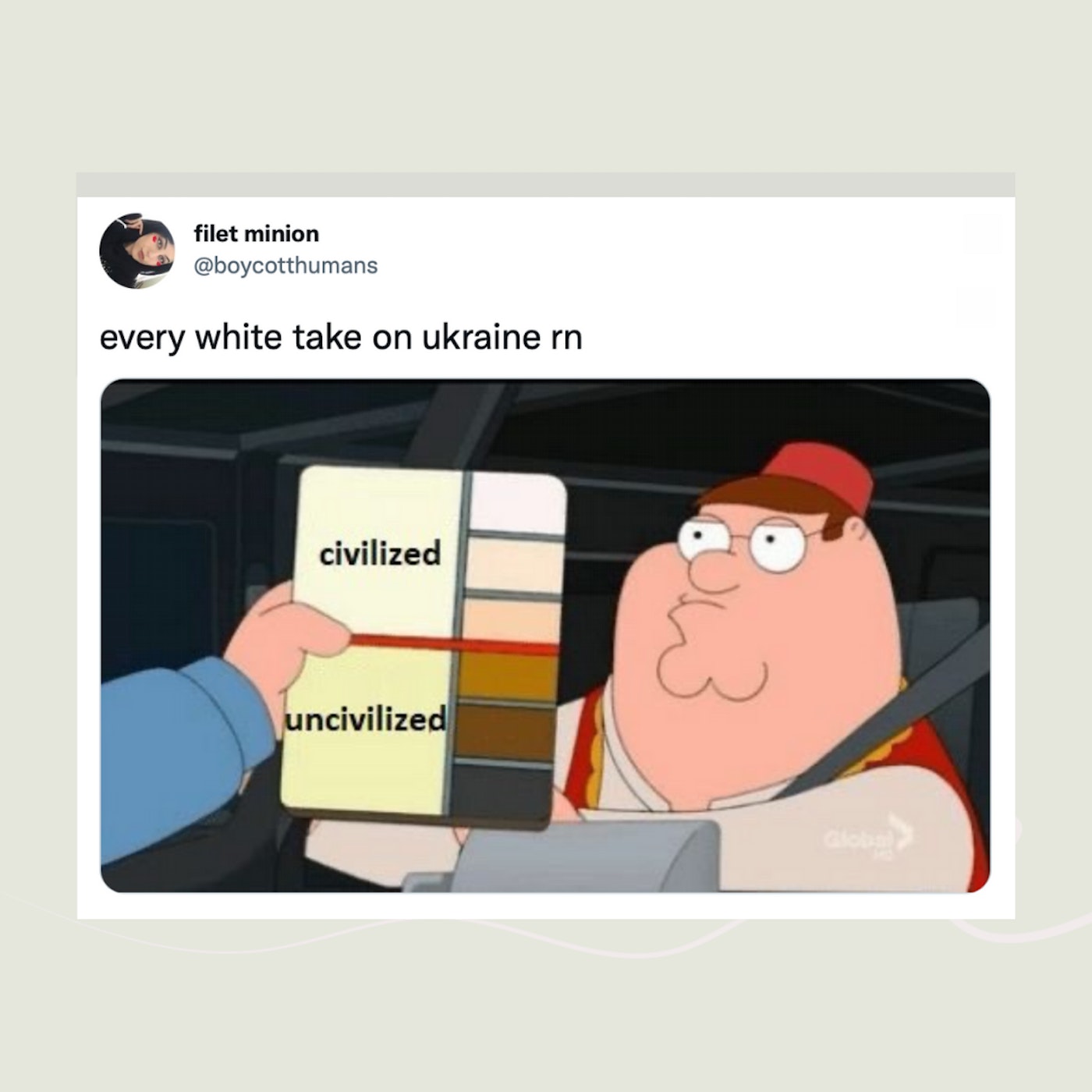 Russian President Vladimir Putin has launched a full-scale invasion into Ukraine following months of military build up on the country’s border. Russia has been conducting airstrikes that have killed over 352 civilians and displaced more than 360,000 Ukrainians who are now attempting to flee the country to safety.

The war has triggered swift condemnation and economic sanctions by several countries including the United States and the United Kingdom as well as emergency talks at the UN Security Council (UNSC).

Social media users were quick to note the stark difference in the speed of the international community’s response to events in Ukraine and the unequivocal solidarity voiced by leaders of Western nations in comparison to other conflicts currently taking place across the world.

Which conflicts are seen as world-changing or ‘world wars’, and which aren’t? All wars change the world in some way.

I've covered so many wars in the Middle East, and the difference in the level of empathy and attention compared to what you see regarding the war in Ukraine really gives one pause.

It is entirely possible to be outraged by the treatment of black people at Ukrainian borders, outraged for Ukrainian civilians being murdered, and outraged at the abandonment of brown Muslims still at war. Humanity is nuanced. I am perplexed by how binary this is becoming.

Too many pundits on TV have said they haven’t seen images like what we’re seeing in Ukraine since WWII. Yes, we should be outraged and stand with the people in Ukraine. We cannot engage in the complete erasure of what’s been happening in Gaza, Yemen, and too many other places.

This is false. Syrians have documented, tweeted etc. for a decade. The @SyriaCivilDef even has cameras on their helmets capturing war in real time. And today two civilians were killed in #Idlib – there’s photographic evidence. It’s the world that has chosen to look away. pic.twitter.com/xFcHPmRVsg

Millions facing starvation as farms in Yemen have been bombed almost a thousand times. There will be no no-fly zone over Yemen. It will not even be asked for.

The racial politics of what constitutes humanity for the West.

“They seem so like us.” This sentence alone informs us of how the West understands solidarity.

Reminds me of @renireni writing about western states lighting monuments when there is a violent attack in the west pic.twitter.com/VHAR44MxKa

we never stopped being at war. it’s just some casualties are remembered more than others.

Struggling to see why the Russian Grand Prix is cancelled, but the Saudi Arabian grand prix goes ahead. Do Yemenis not count as real people?

Journalists, media outlets, politicians and even culture and sports bodies have been accused of hypocrisy and racism for using dehumanising language to question how war can break out in a “civilised” nation and insinuating that “blue-eyed and blonde-haired” refugees fleeing the war in Ukraine are more worthy of sympathy and support.

From “civilised” to “blonde hair blue eyes” – I want to scream at the way we’re so casually dehumanised in mainstream news https://t.co/cj2bKAti9u

The Bulgarian PM: "These are not the refugees we are used to. They are Europeans, intelligent, educated people, some are IT programmers…this is not the usual refugee wave of people with an unknown past. No European country is afraid on them."

I am not surprised, just angry.

Africans are refused entry into a train taking people from Ukraine to Poland.

Africans are forced to wait for Ukrainians and other Europeans go first in several trains before they can be allowed to leave the country. pic.twitter.com/tUmRVLYo2Q

I mean, let’s he honest here: it is also to do with a shared religion. From the pictures I remember of Bosnians on our screens, they too were blonde and blue-eyed but they were Muslim. This is how the process of racialising occurs, conjuring images of who is un/worthy. https://t.co/jO3xrbMvvg

Damilare has been on top of bringing light to what’s happening with Africans trying to leave Ukraine – the videos shared on his page are devastating & an indictment of European border & migration racism. Borders are open for some, if you look the right part. https://t.co/pbJCMzGSig

How painful it is to read about visas and solidarity movements when my family in Yemen have lived in war for years now. Their passports mean nothing and nor does the violence they have endured. I suspect this is the same for many. And yes, solidarity.

The Neo-Nazi administration is attacking the Indian students living in Ukraine. Few students accused the Ukraine police of hitting and kicking them when they tried to cross borders. pic.twitter.com/4zGb7zKaR3

Watching closely the portrayal of Ukrainian armed resistance as a heroic undertaking by a people in the face of an invasion & occupation while many supporters of liberation movements have been forced into condemning violent armed resistance bc it’s not against the ‘right’ enemies pic.twitter.com/S9IedeZU7G

The language some organisations/leaders are using in their statements about Solidarity with Ukraine are actually really sickening.

The clearest examples we have of what we mean when we talk about Eurocentrism, White Supremacy & Black lives not mattering.

Many have also called out the glaring double standards in Britain’s Foreign secretary supporting British citizens flying over to Ukraine to help fight Russian troops while many Muslim aid workers who travelled to places like Syria to support humanitarian efforts were criminalised.

🧵on foreign fighters and Ukraine. The Foreign Secretary has said she will support British citizens who go to Ukraine to fight Russian troops. This seems to fly in the face of established govt policy on British citizens engaging in conflicts abroad. https://t.co/MG9RXEYiFJ

British Muslims are deemed to be at risk of radicalisation for feeling & acting upon empathy for fellow Muslims suffering military invasions in Palestine, Iraq & Afghanistan. Why are similar concerns not being raised about those expressing such sentiments with Ukraine today?

Others highlighted the hypocrisy in countries and major organisations supporting sanctions, boycotts and civil resistance against Russia’s military occupation of Ukraine while criticising or outlawing these same tactics when used by pro-Palestine activists against Israel.

So you agree…that boycotts, divestments, and sanctions are legitimate actions against an occupying force? pic.twitter.com/giWz91i2B9

What Ukrainian civilians are doing is armed resistance—a completely justifiable turn to violence to defend themselves. Americans have quickly understood that. I hope they can also be as understanding when non-Europeans turn to arms as a last resort in their struggles for freedom.

Over the past few days, we’ve seen footage of israelis protest occupation of Ukraine from occupied Palestine. We’ve seen reports of israeli gov’t sending aid to Ukraine & opening its borders for Ukrainian Jews to settle on stolen Palestinian land. This is called Bluewashing. 1/3

The Ukrainians, of course, have the right to resist foreign invasion & occupation.

So too do countless other (often non-white) peoples across the globe, who frankly don’t get anywhere near this kind of supportive, sympathetic, & humanizing coverage from our media in the West. https://t.co/lHj27wjMYm

Remember when Israel was flattening tower blocks in Gaza and we were told nothing could be done about it, no sanctions, no arming the Palestinians? Strange that.

This girl here is Ahed Tamimi, a Palestinian from Nabi Saleh in the occupied West Bank, who is 11 year old in this image taken in 2012. She was sentenced to eight months in Israeli prison as a minor for slapping an occupying soldier.

I’m tired. This has to be a psyop. pic.twitter.com/SafTQFWKCI

The media understand illegal occupation and settler-colonialism after all! You're allowed to defend your family and homeland (unless you're Palestinian, in which case you become a savage terrorist)