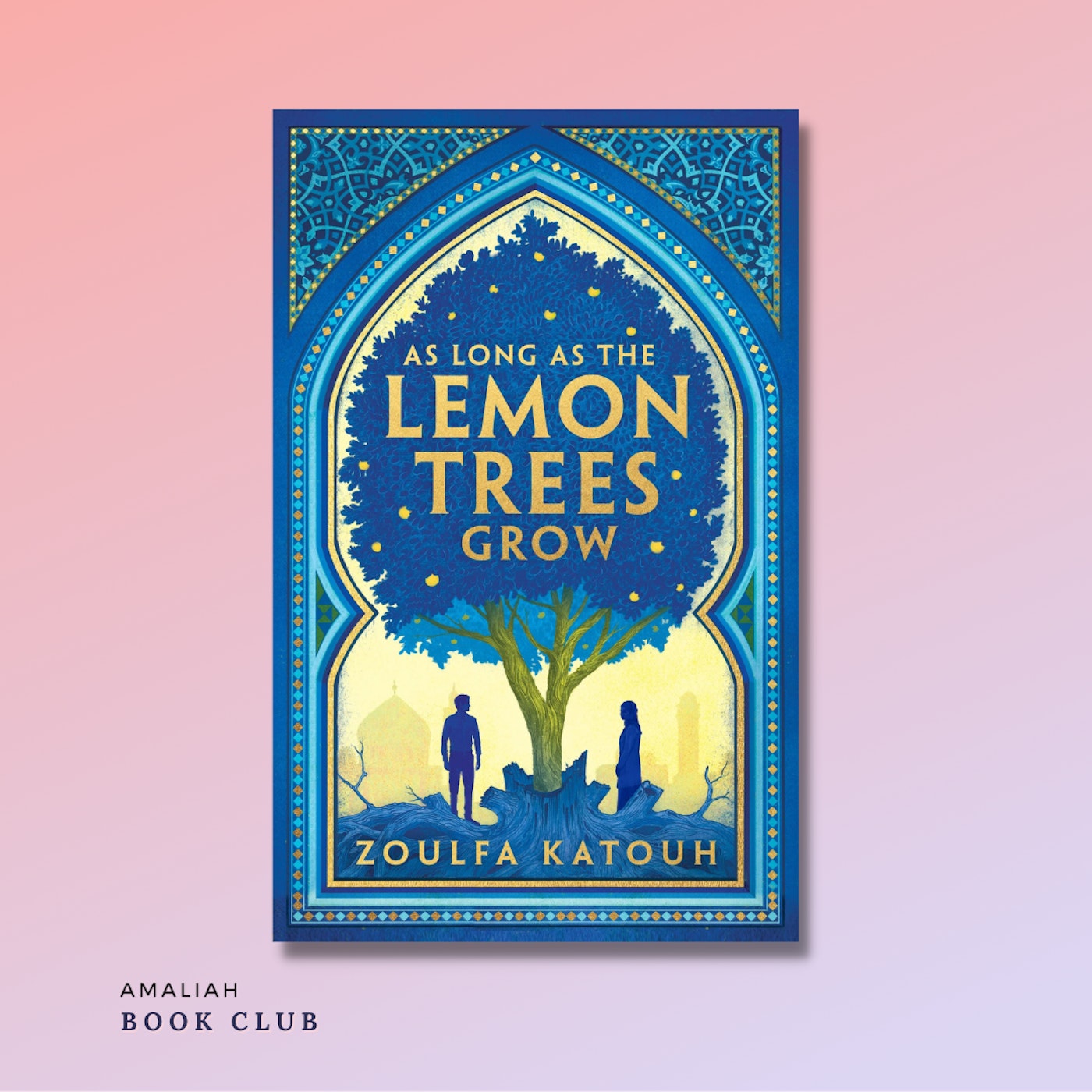 As Long As The Lemon Trees Grow is the debut novel by Syrian-Canadian author, Zoulfa Katouh. A pharmacist, masters student in drug sciences and a self-confessed BTS and iced coffee addict, Zoulfa is a talented and passionate writer to be applauded. She is also the first Syrian author to be published in both the US and UK in the young adult category, and her book takes inspiration from the history, culture and hopes of Syria.

Set in the midst of the Syrian revolution, As Long As The Lemon Trees Grow tells the intricate and powerful story of a young pharmacist, Salama, who is torn between serving her beloved country or fleeing to safety with her pregnant sister-in-law and best friend, Layla.

As a volunteer in the city of Homs, Salama is not only plagued with the violence and loss surrounding her every day, but a haunting hallucination named Khawf who reminds her of the horrors of her past and fears for her future. On her journey, Salama also crosses paths with Kenan, a boy who reminds her of everything Syria could be.

Amaliah sat down with Zoulfa over tea and pastries to learn more about the As Long As The Lemon Trees Grow, her journey as an author and advice to other female, Muslim storytellers.

For those who don’t know, tell us a little bit about As Long as the Lemon Trees Grow.

As Long As The Lemon Trees Grow follows a girl named Salama who is a volunteer at a hospital in Homs, where the story is based. Every day, she sees civilians and protesters who are injured coming into the hospital and she has to operate on them with a very low sack of medications. And at the same time, she’s trying to find a way out of Syria before her pregnant best friend and sister-in-law, Layla gives birth.

Because of all that she has been through, her post-traumatic stress disorder has manifested itself into a hallucination named Khawf, who seems very real and he’s pressuring her to leave Syria. So she has an internal struggle of whether to stay or leave and because of all that’s happening, she has lost that spark of life and doesn’t see the colours anymore. Everything is like black and white.

That is until she meets Kenan, who is one of the protesters, and he shows her that life is still worth living and there’s still colour in the world. But, the bombs are falling and Layla’s due date is getting closer so she has to make a decision of whether she should stay in her home country or leave to pursue a very risky future.

What were some of your main sources of inspiration during the writing process?

A lot of characters were inspired by certain things, for example, Salama and Kenan were inspired by Katniss and Peeta. I thank Suzanne Collins in my acknowledgements as without them, there would be no lemon blossom, which is Salama and Kenan’s ship name. Layla is inspired by optimism and Khawf is pessimism, so they contrast a lot. Also, Salama is inspired by the White Helmets who risk their lives everyday to save innocent civilians, and they’re not actual firefighters or rescuers. It could be a baker or teacher and they volunteer to be part of the White Helmets.

Salama is also inspired by Rouzan al-Najjar, who was the Palestinian medic shot by the IDF while trying to save a protestor in the Gaza strip. She was only 20 years old, two years older than Salama. Very interestingly, she was born on the 13th of September and my book came out on the 13th of September which I never realised. I don’t believe in coincidences so I feel it’s fate, subhan Allah, I want her to live on and for Salama to serve as a homage to her.

Tell us more about how your background as a Syrian-Canadian informed your storytelling?

The last time I was in Syria was around 2009 when I was 14 or 15 years old, and the moments in time when Salama thinks about her time in Syria before the revolution happened were all inspired by my own experiences. I thought of my time in Damascus or the orchids in my grandfather’s village. I took from the summers spent in Syria and the sweeter moments, which I wanted to be reflected in my characters.

What do you hope people take away from reading?

As a female, Muslim author, did you face any difficulties in having your stories heard and if so, what were they and how did you overcome them?

Alhumdullilah, I haven’t had so many issues compared to others and I’ve received some amazing support. I did get one comment from an agent who said “Oh, it’s clear that English is not your first language because your sentences are rigid and not fluent enough”. But, it is my first language and it was only because my name is Zoulfa Katouh and I said I am Syrian. When editing, I would second guess every sentence and worry if it was fluent enough which was not a nice feeling.

But, I’ve received a lot of beautiful compliments from people such as my agent who said, “This is some of the best writing I’ve ever seen”. So, you learn to look at the good and I’m glad that a lot of people have liked my writing. And it’s fluent enough, I guess.

Why do you think it’s important to have Muslim women specifically, like yourself, telling stories like these?

Muslim women have been silenced for so long and I think it’s time to tell our stories and in a way that does justice to ourselves. The book doesn’t depict things as black or white, it is all the shades of the colour spectrum and that’s how Muslim women are. That’s how their lives are. That’s how the Muslim community is. So, if you only show one side, it imbalances things and generalises us and doesn’t show the nuance. Sometimes, it’s not even written by us either so it’s great to hear our voices.

There’s a book called All My Rage by Sabaa Tahir and whenever I’m asked about how to write Muslim representation, I say that Sabaa Tahir did it. She wrote perfectly imperfect Muslims who aren’t extremists or paint Islam as the villain, they’re just living their lives and it’s beautifully done. It was only released this year so it’s bittersweet that we had to wait until 2022 to have actual Muslim representation, but we’re in the right direction so I’m excited for the future.

As an author, what does representation mean to you and your writing? And does trying to be representative come with any pressures?

Oh, it means everything. I try to heal my 13-year-old self who hasn’t seen herself in books, I write it for people who don’t know much about Syria, I write it for the Muslim teenagers now and I write it for adults. But, I also write it for myself. This is me healing my trauma and I deserve those stories. I know 13-year-old Zoulfah would have loved to have a book like this – it’s heavy-themed so she probably would read it when she was 15, but she would have been very happy to have that on her bookshelf.

But, yes, I think many marginalised authors feel they have to represent their entire community but they don’t.

Personally, how have you managed publishing a book alongside studying for a masters degree?

I blacked out, honestly. I was running on coffee and no sleep. But the burning need in my heart to write kept me going. I knew I had to see it through – I owe it to myself, I owe it to the world, I owe it to my people. If it happens, Alhamdulillah. If it doesn’t happen, also Alhamdulillah, I would have given it my best. And it worked out!

What would you say to your 14-year-old self now and what would she be thinking?

Oh my gosh, she would be speechless. I would tell her that it will take time to find yourself in your stories, as I used to dabble in writing and I loved fan fiction but my original writing wouldn’t often go past one page. Then, I’d often write about white girls and never an Arab or Muslim girl as that’s all I had seen, so I had to question myself and ask why I was muting myself when I could be screaming.

But, that comes with confidence as at times when writing this book, I hated it and thought it was atrocious when I should have trusted myself. A message I would give to myself five years ago when I started this journey would be to be kinder to myself. As diasporan children, we’re hard on ourselves and worry that failure isn’t an option, but I had to learn that it is. I was that kid who would cry if I was one mark away from a top grade, but now I know it’s part of life. Being an author means being rejected all the time, and it’s important to take care of yourself as even if it does hurt when people say no, people will also say yes.

What are some pieces of advice you would give to other storytellers?

Again, be kind to yourself. Write the story from your heart as I remember being worried about writing a story that doesn’t exist within boundaries or that nobody would like it because it doesn’t fit their criteria. I’m so happy that I was wrong and I’m happy that I kept on writing. Now, I don’t worry if it will fit the mainstream media as there’s someone out there who will love your book, and one person makes a huge difference.

An added note, I’m very sorry for the pain that you will experience reading this book, but at the same time, I’m not. I hope you enjoy it and that you take a message from the book, which is hope.

As Long As The Lemon Trees Grow is out now.