“When I swam through the ocean to safety, I never thought of a movie being made of my life because millions of other refugees went through the same,” says Yusra Mardini.

At just 17-years-old, Yusra and her sister, Sara Mardini, left their home of Damascus, Syria during the ongoing civil war to find refuge in Germany. While in the middle of the Aegean ocean, the motor of the small, rubber dinghy which carried them and 16 other refugees stopped working, so they swam for three and a half hours. After arriving in Germany, Yusra trained for and later competed in the Olympics, twice. Now, her story is being told in the new Netflix film, The Swimmers. 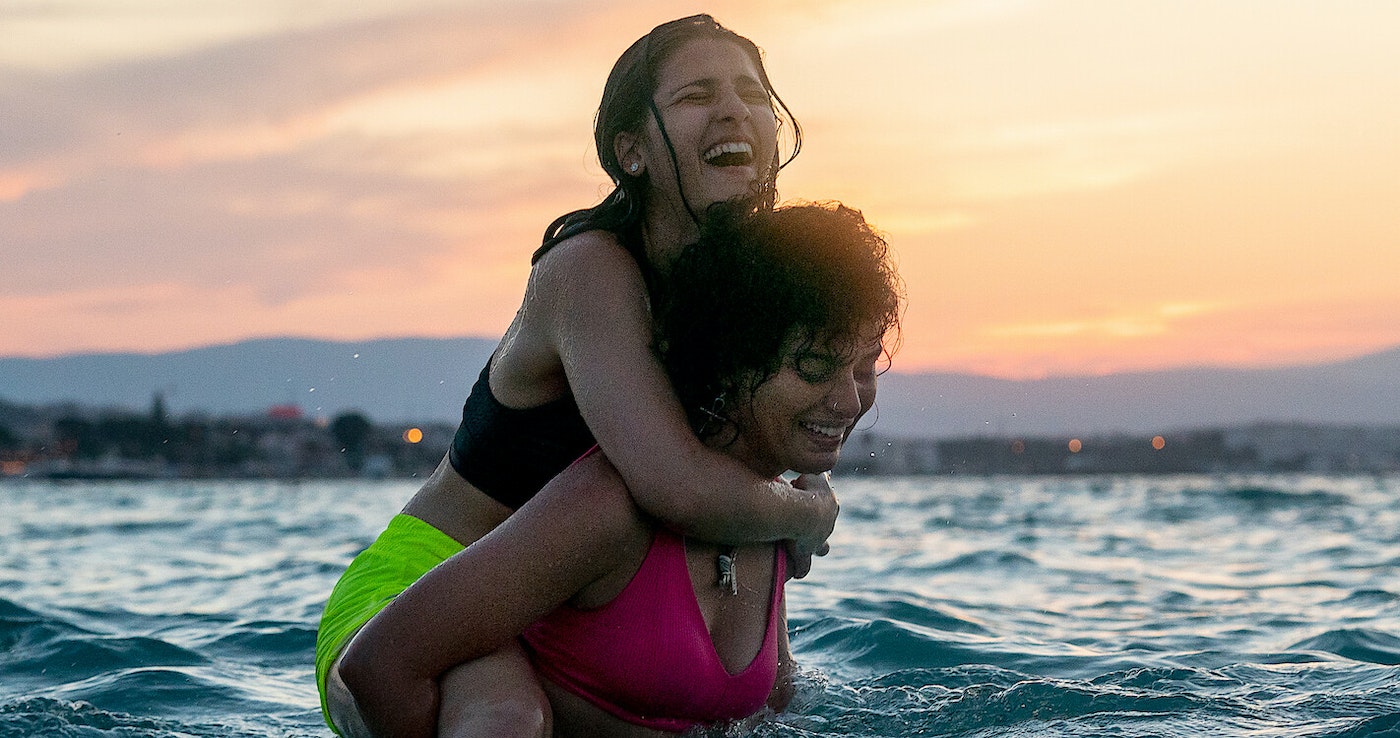 The Swimmers is an intricate, moving and powerful story which not only depicts, but humanises the realities of the Syrian revolution and ongoing global refugee crisis. From seeing Yusra and Sara spend time with their family and socialise with their friends at home to watching them say goodbye to their loved ones and board boats and planes to foreign countries, the film puts you in the shoes of the two sisters and millions of other refugees around the world.

While being an emotional, difficult film at times, The Swimmers is a must-watch for all those needing a better understanding of why people choose to say goodbye to the only life they’ve ever known in search for better. “I hope that audiences understand that anyone can become a refugee, and we don’t choose to become refugees,” said Yusra as I sat down with her in London to talk about the new film.

The now 24-year-old has a twinkle in her eye, passion in her voice and kindness in her heart as she speaks of the issues she has chosen to dedicate her life and work to. Now living in Germany and spending time working as a UNHCR ambassador – the youngest person ever to hold such a position – Yusra is undoubtedly a role model to refugees, Syrians and people everywhere and her story is set to move and inspire audiences in more ways than one. I talked more with Yusra about The Swimmers, growing up in Syria and her hopes for the future.

What was your first reaction to finding out a film was going to be made about your life so far and how do you feel now it’s almost out?

Very exciting. I’m a lucky person to have my story picked to become a movie. I was very happy but I thought “I’m not going to believe it until I see it on the screen”. Now, here we are with the film released in cinemas and on Netflix. It’s very, very exciting and it’s an important movie with a huge message, and I hope it has an impact on society, in terms of refugees and so on.

How do you think The Swimmers has portrayed your story?

I think it was portrayed in a very creative, authentic way. The way Sally [El Hosaini], the director, directed the movie to the way the film was produced, the cast, everyone that worked on the movie… they were all very, very passionate about creating a story that’s going to have an impact on the world and that’s exactly what I feel this movie is going to do. I don’t feel, actually, I know.

I was incredibly moved by so many moments in this film, such as when the bomb fell into the pool while you were swimming and your boat journey to Lesbos, Greece. What scenes in the film touched you the most having experienced them in real-life?

One scene that really touched me was the scene of the birthday party that my sister threw for me. That was real; she threw me a huge party for my 16th and when we were dancing on the rooftop, and the bombs fly, we’re still dancing and don’t stop to see them. This portrays the sad reality of our lives, and it was true.

You don’t see that in other movies or on the news, so this scene was so important as it portrayed the country, Syria and the Middle East. When you think about the Middle East, you think “everything’s destroyed. There’s no culture”. The images that are shown in the news terrify me because when I was living in Syria and saw news like that, I was like “it was one building that was bombed, everything around it is fine.” But they focus on this one building and of course it was sad, but Damascus was not affected as much as Aleppo, Latakia and so on. So that scene is powerful, because at the time, we were also teenagers just trying to live and be normal, so that was one scene that touched me.

The second scene that really, really makes me sob is when I have a nightmare that my sister is drowning and dying and my medals are also floating around underwater. That is my biggest fear in life, to lose her or someone from my family.

What are your favourite memories of Syria and your life before the civil war?

My favourite thing about Syria was the Olympic Stadium. I spent more time there than at my home and when training was finished, us swimmers used to sit outside chatting and annoying each other. I also miss my grandma, the food, my family and friends in Syria. I would love to go back for half a day or a day to see everything and everyone and then come back, hopefully one day. And I would love to rebuild my country as well when I can be there again.

Can you tell us a little bit about your sister, Sara, and how she informed this film and your life?

My family are all living in Berlin right now and unfortunately, my sister still has the case that has been going on for years. [Sara Mardini stands accused of espionage and spent more than 100 days in prison after working to help refugees, read more here].

She has a court date in January and there’s an Instagram page called Free Humanitarians where there are always updates about her case and others because unfortunately, my sister was not the only humanitarian jailed for her work. But she’s okay, she has me and I always support her. I’m always there for her and I will never let anything bad happen to her or my family. Now, we have Netflix, Working Titles, the producers and the whole cast and it all feels like a family. Through the movie, we are also extending our family and everyone is becoming a part of our journey as well. We are thankful for that, and there are lots of people who are supporting her.

It is not common for us to see such intricate, humanising stories about the Syrian civil war and refugee crisis, how do you hope audiences will see these issues after the film?

I hope people understand that refugees are normal people. We do not choose to leave our countries, we leave our countries because of war and violence. Then, when we get to other countries, we just want our basic human rights, to have a normal life in a cosy, small apartment with our families. Also, it’s not wrong to dream big as a refugee. If you’re working hard and your ambitions are big, then you should go for it and not listen to anyone else. Here in Europe, people say “refugees are taking our money, refugees are taking our jobs” but if you do your job well, no one is going to steal it from you.

If you look at countries like the UK, it’s so diverse. There are so many people from all over the world and refugees should be allowed here because refugees did help build this country, as well. If you speak to British people, they often will say “my grandpa is from Pakistan, my grandma is from Syria, I was born here, but my family came from elsewhere”. There’s no country in the world that is just native people, it’s impossible. So, I think we should learn from each other’s cultures and learn to help each other.

The refugee crisis is not going anywhere soon, unfortunately, with wars all over the world. Climate change is coming, too. It’s very serious and we’re going to have refugees from that soon, too. So, anyone can become a refugee but we can all help and there’s enough space on the planet for everyone.

Why do you think it’s so important to portray stories and issues like these?

Because it’s never portrayed, and even if it is, it doesn’t get the attention that it deserves. It is treated as a sad reality that no one wants to see. When you see on the news that five people died in Syria or elsewhere, you’re sad for two seconds and then you move on. That’s sad. We want this movie to really affect people and we want them to have empathy and an understanding of what refugees go through. We really want people to understand that this can be you, this can be me, this can be anyone.

Entertainment is very important, too, and this movie also has a side of sarcasm and humour, which me and my sister are like 99 percent of the time. This is how we cope with life. After we finished watching the movie, my sister climbed over her chair to hug Sally and she said “I forgot how much I love my sister”. So, we just want people to understand that they can help and that just one act of kindness can go a long way. 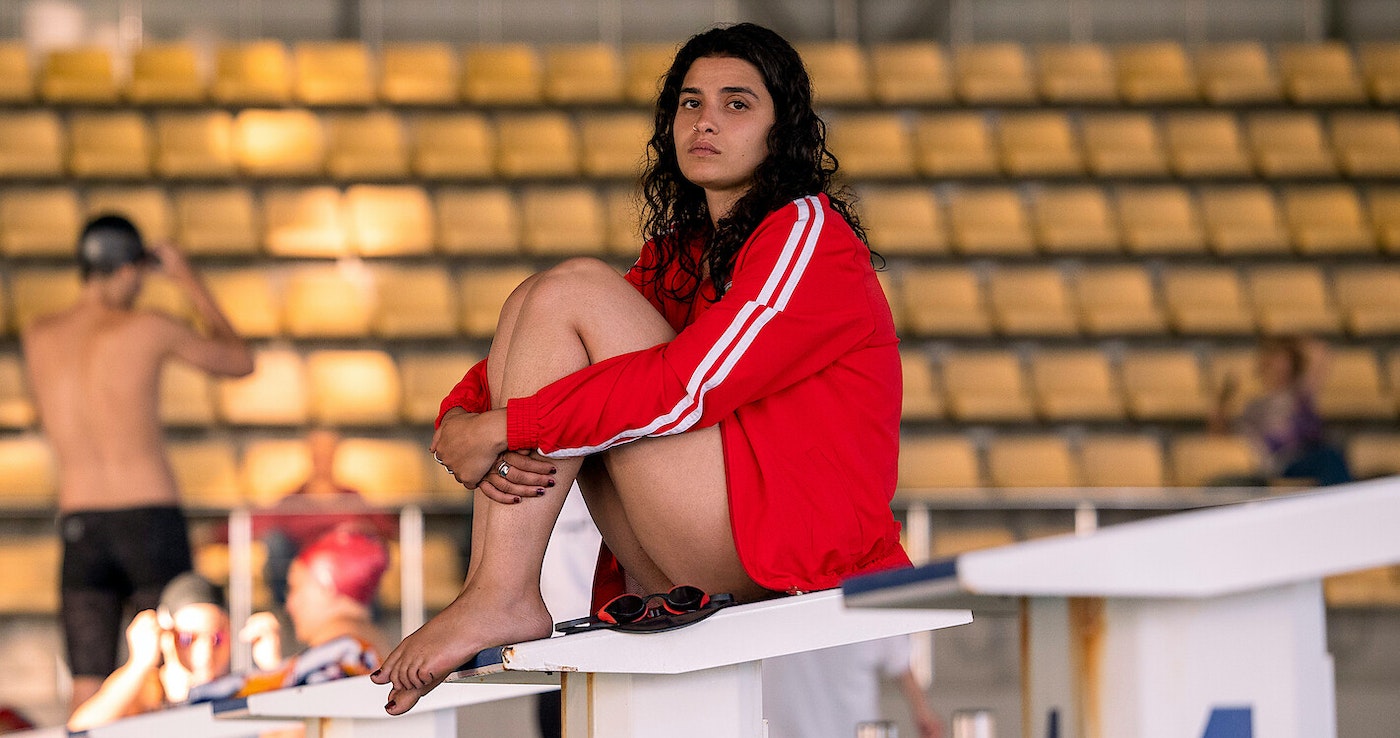 You’re undoubtedly an inspiration to Syrians, refugees, women and people everywhere. What advice would you give to young Syrians or other refugees struggling to find their place in the world?

First of all, I don’t want them to give up. I know that it’s hard and sometimes you don’t feel like you fit in, whether you’re a refugee or not. Sometimes it feels like everyone has their life together and has a goal but believe me, no one has it figured out. Not even me. I have anxiety and sometimes I freak out for no reason, but that’s fine, that’s just life. Go step by step. If you have a dream you love and no one approves of it, still go for it, please. Because the most important thing is you and what you’re dreaming of achieving, not what others say to you.

Sometimes those things come from the closest people that we know and it might hurt, but please keep going and know that I struggled, everyone struggles and I still struggle today. But what I do is I watch a little bit of Netflix, I eat a little bit of ice cream, I cry my eyes out, and then the next day I wash my face and I try again. That’s just life.

The Swimmers is out on Netflix now.