by Furvah Shah in Identity on 8th December, 2022 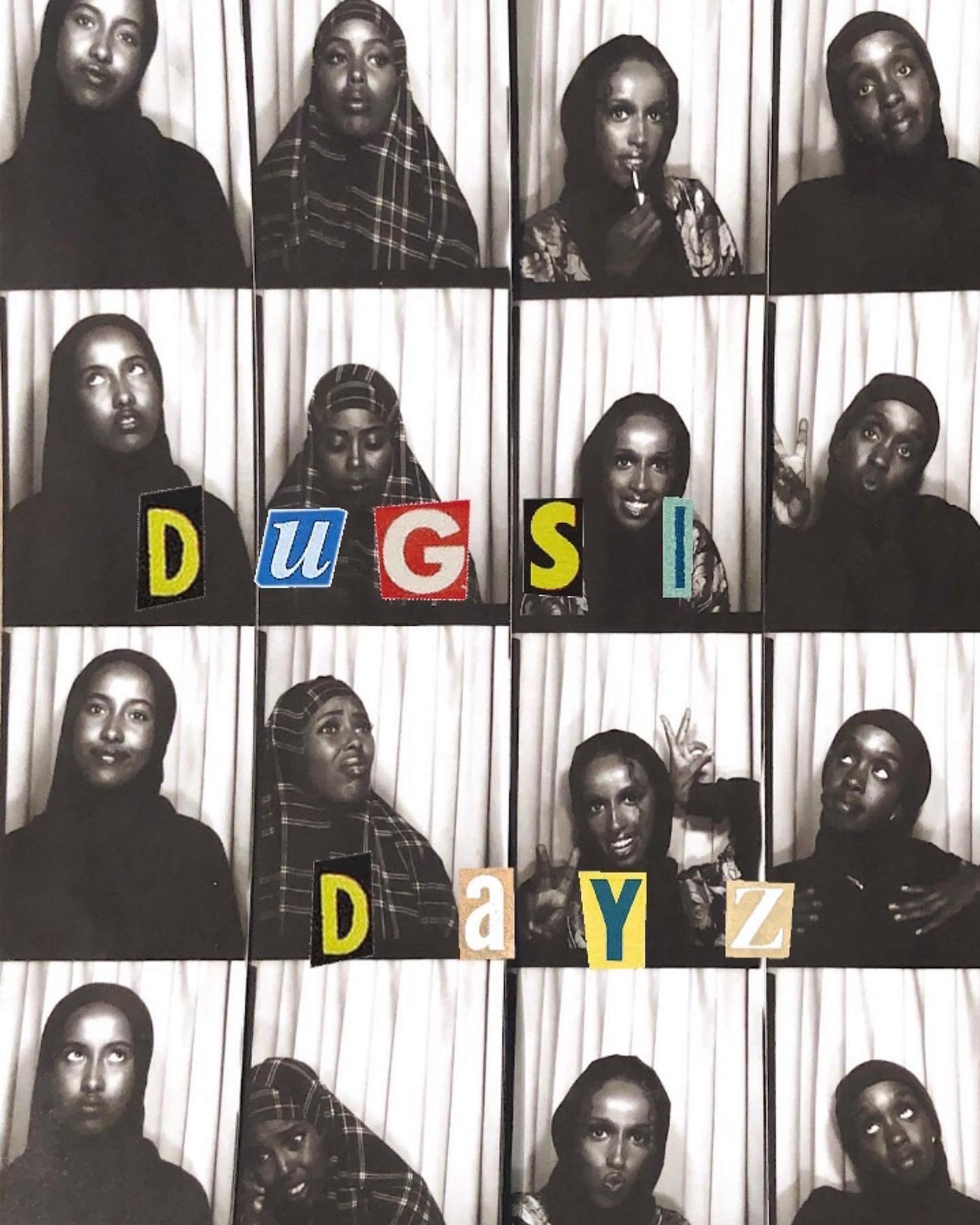 “I want to go to a theatre or cinema and unwind with funny, celebratory stories of Black joy, as we are so much more than our trauma. So, I knew I wanted to write a comedy and create a space where people can come together, laugh and reminisce about our dugsi days,” says actor and playwright, Sabrina Ali.

Dugsi Dayz is a new British-Somali play from Ali, and tells the story of Salma, Yasmin, Munira and Hani – four girls who have ended up at dugsi detention on a Saturday afternoon.

The Side eYe Production at Rich Mix theatre, in collaboration with London Somali Week Festival, is a comedic exploration of Somali, Muslim culture and female friendship inspired by 1985’s The Breakfast Club, in which the characters learn they have much more in common than they first thought.

From jinn stories, scary aunties and being judged for wearing skinny jeans, the incredible writing, production and acting behind the play makes Dugsi Dayz a refreshing representation of Somalis and Muslims that audiences can not only relate to, but completely see themselves in.

The play, which was performed over two days and sold out in just 24 hours, transports audiences into a London mosque complete with Kaaba sculptures, jilbabs and prayer mats decorating the floor, for a dugsi detention.

We’ve officially sold out in less than 24 hours 😲😭 !!
Appreciate everyone who shared & bought tickets so so so much <333
It’s honestly going to be a night to remember can’t wait to see everyone!!For everyone messaging about more dates/tickets we’re working on it inshallah 🫶🏽🥹 https://t.co/PQiUNuSmKT pic.twitter.com/XmiMAd6Urv

Dugsi, which translates to school from Somali, is a place where people (predominantly children and young adults) study the Quran and Islam. “You can ask anyone who is Somali about their funniest dugsi memory and they’ll tell you the most outlandish, crazy story. It’s like a rite of passage and a place that brought us all together,” said Ali.

For the four leading characters, they are spending a Saturday afternoon at dugsi detention for reasons unknown to each other, with audiences eager to find out why they are there.

From the very beginning, Ali’s storytelling is spot-on with a script that flows so well, it sounds as though her lines were lifted straight from a real-life conversation between teenage, Muslim schoolgirls – complete with the use of ‘wallahi’ every other sentence.

The acting felt incredibly natural, as though there was a mere window between the audience and characters, with the majority of the viewers incredibly receptive to every joke. From the gossipy best friends, the pious sister and the quiet yet defiant loner, everyone knows of or can relate to Salma, Yasmin, Munira and Hani.

On creating the characters, Ali said, “I really liked the idea of writing about girls who aren’t one dimensional, as Somali and Muslim girls are all very different. A lot of time on TV and on screen, we’re represented by certain tropes such as being super religious or trying to fit into Western society and free ourselves. But, we’re all so different and unique so I looked at all of the Somali girls I know and drew inspiration from them.”

Not only can audiences relate to the characters, but the themes of struggling to speak our mother tongues, avoiding the judgement of aunties and *that* story of the girl who turned into a rat for disrespecting her parents make you feel as though you are the fifth person stuck in this dugsi detention. 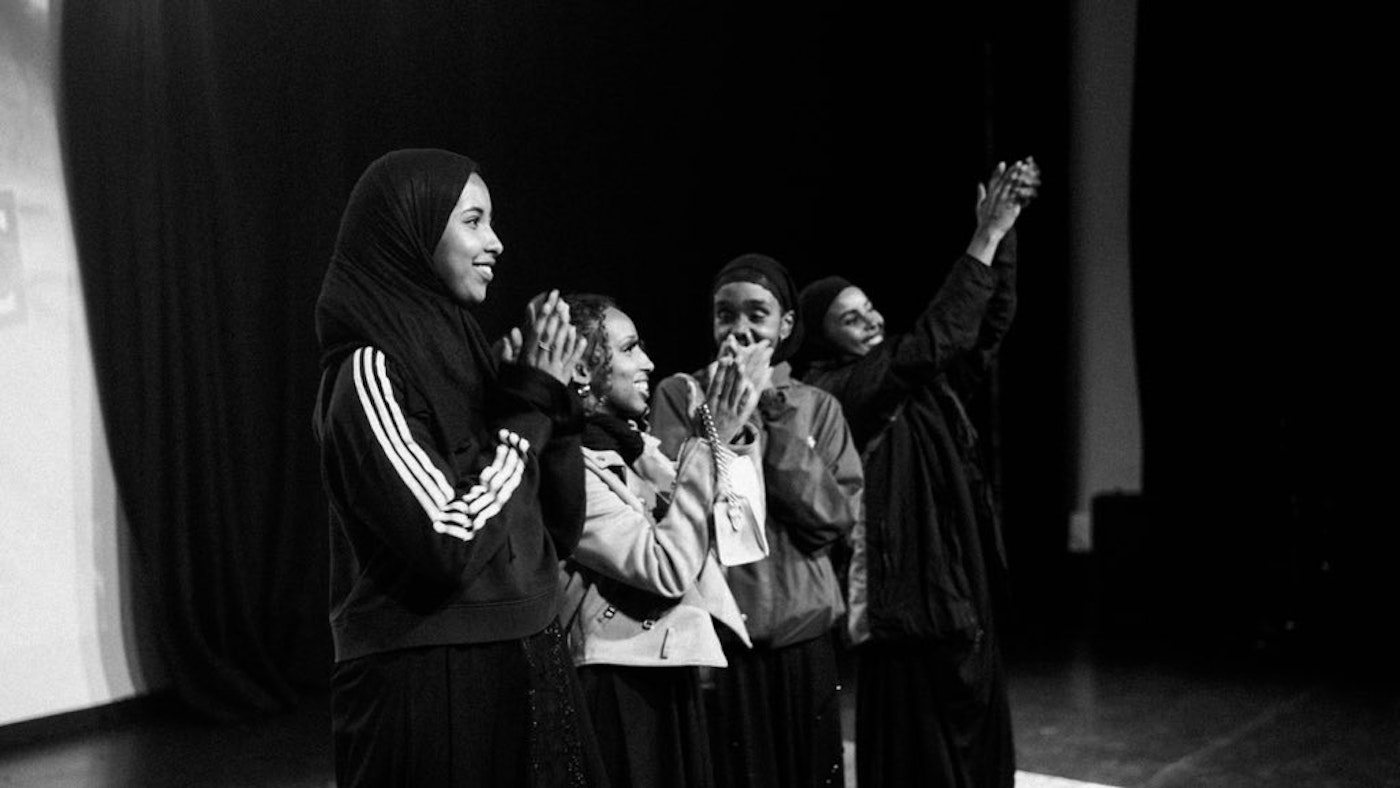 And, while some jokes and lines are told in Somali with some audience members struggling to fully understand, the story and its characters are not any less relatable for viewers.

“You can’t please everyone and you can’t write for everyone,” Ali said about writing the play. “But, seeing reactions from people who weren’t Somali, who were Muslim from other ethnic backgrounds and who weren’t even Muslim, and how much they enjoyed the work made me realise the importance of being authentic to yourself and the stories you want to tell.”

As the play progresses, our leading ladies go from strangers to friends to enemies and back to friends and, without a doubt, it is unbelievably funny with audiences left belly-laughing at every perfectly-timed comedic moment.

But, the show also explores serious issues like the topic of dhaqan celis, a practice in which many young Somalis are sent back to Somali for ‘misbehaving’, and the character of Hani shares the trauma of her own experience.

Overall, the show was extremely well-received by audiences, who gave it a warm standing ovation and said they found it “inspirational” and “like nothing [they’ve] seen before”.

“It was great seeing women who look like me write, direct and produce something so fantastic,” said one viewer.

On how she feels in the aftermath of the play’s success, Ali said she is “on a high”.

“When I first wrote the script, I was contemplating whether it was funny and if people would like it and leading up to the play, I had more anxiety. I was worried and had imposter syndrome, especially because I didn’t have that much time to work on the script – I wrote it in three days and I wish I did make it longer as there’s so much opportunity for growth.

“But, Alhumdullilah, seeing the audience’s reactions from Somalis and non-Somalis and non-Muslims and how much they enjoyed it meant a lot to me. It’s left me on a high and motivated me to work on making something more out of Dugsi Dayz, in shaa Allah.” 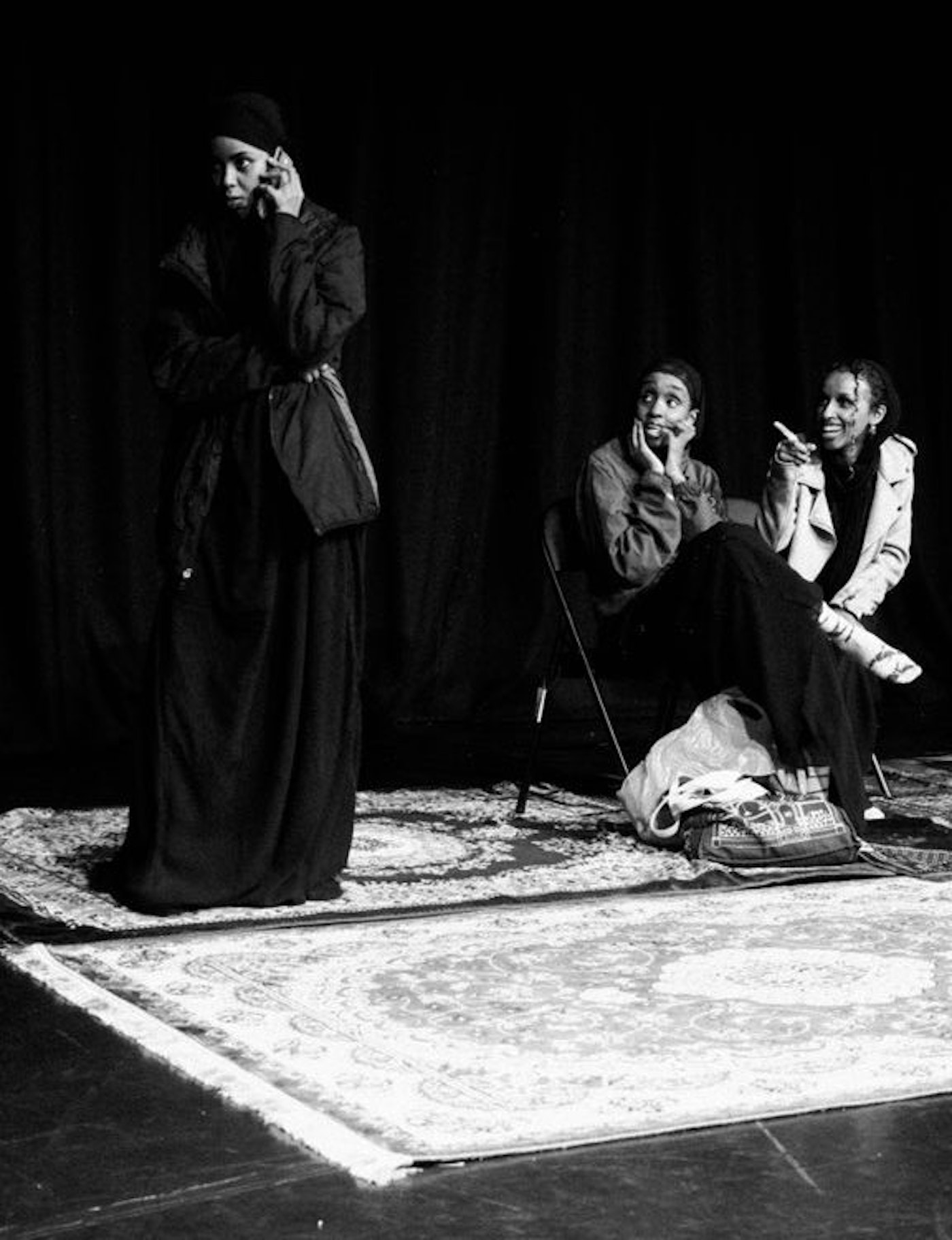 On the creation process for the production, in comparison to previous plays she’s worked on such as Muna Knows It All and Home, Ali said it was “a lot more hectic.”

“With Muna Knows It All, I co-directed with Poppy [Clifford] and this time, I knew I wanted to write about and for Somali girls and as I wasn’t directing, I had to take a backseat.

“With finding the actors… I didn’t want to test people’s acting abilities in the auditions, I just told them to share their dugsi memories and say why they’re interested in performing. I wanted to give an opportunity to Somali girls who wanted to act, and it all worked out well Alhumdullilah. It was a massive team effort.”

During rehearsals, Ali said the cast and crew also had the chance to bond over their experiences in the theatre industry and its lack of representation of different communities. She said, “Like a lot of young Somalis and Muslim girls who want to pursue acting, one hurdle we come across is how our stories are being told.

“Often, how we’re being presented in the media is almost off putting and makes us lose our hopes and aspirations to become an actor. I’ve had certain opportunities where I have auditioned for roles, and I was like, ‘this isn’t me. This isn’t authentic to me’. Then, bonding with the other girls in our play over our experiences of the auditions we’ve had, the scripts we’ve read and how our characters were portrayed, made us want to stick to our integrity.”

“For a lot of young Muslim girls, we make up such little screen time, so the stories that are being told [about us] are so important,” she continued. “We can’t afford to be written badly as it can have an effect.

“For people watching, the only representation they see of us may be on screen so I can’t play an angry, Black Muslim girl or a terrorist or someone who is being oppressed as we will end up being placed in a small box. Not only will I be seen in a negative light, I’m representing a religion and community so it’s not just me who may face backlash.

“We have that weight on our shoulders of representing an entire community, so one of the challenges we face is making sure that we’re authentic, there’s integrity to it and we’re not playing negative stereotypes and tropes because when we’re not seen on screen consistently, we can’t afford to play characters like that,” Ali added. 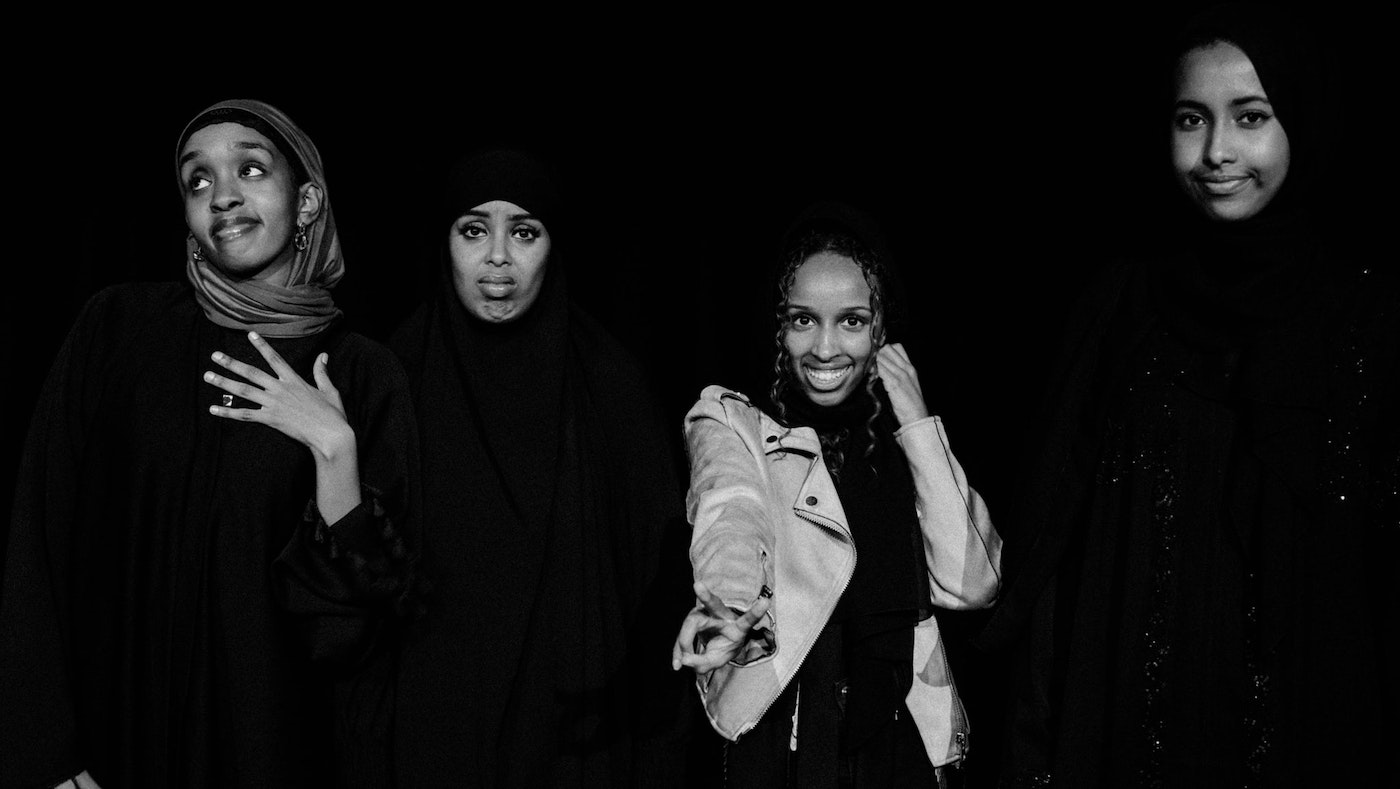 For Dugsi Dayz, Ali said she also wanted to portray Black experiences away from the usual representation of their struggles.

“As a Black audience member and someone who watches theatre and film, we are drained from the stories about our trauma,” she said. “We need to go to the cinema and theatre and see Black joy and happiness. We don’t want to constantly be reminded of the oppression and hurdles we face in society, as we can go outside and experience that. We deal with it everyday.”

On her next aspirations and goals, Ali said, “I would love to perform Dugsi Dayz at a bigger venue and tell more stories of young Somali girls and Muslim girls. Right now, my next goals are to put on a short or feature film, make Dugsi Dayz longer and put it on for bigger audiences. The work is there, the talent is there, it’s now just about who will listen and be the middleman for more opportunities.” 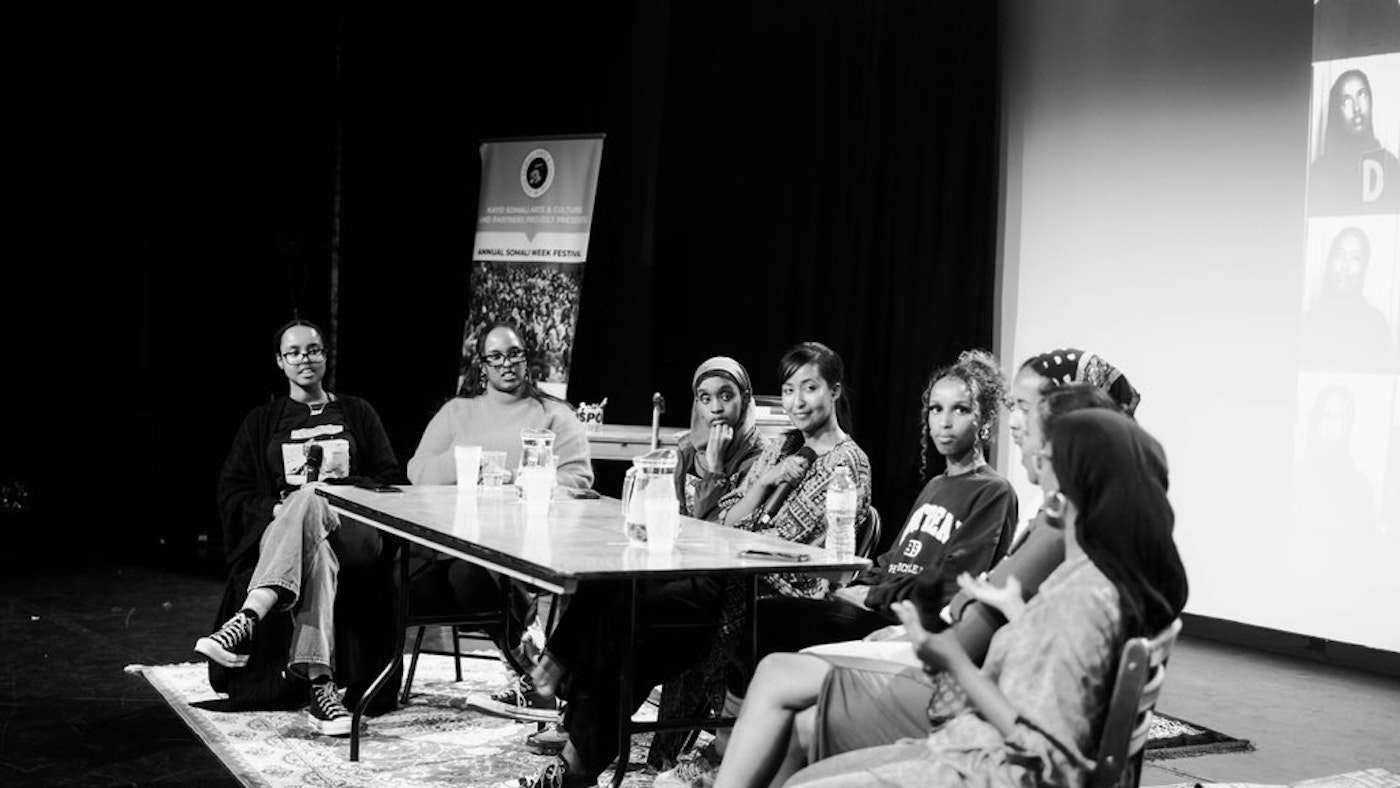 “There are people, especially from our community, who want to see these stories and the play being sold out in 24 hours shows how much Somalis and Muslims will support you and stories like these.

After speaking with Amaliah, Ali confirmed that Dugsi Dayz will be showing again at least twice, with plans for a UK tour for the play in the works.