How Reconnecting With My Culture Helped Me Reclaim My Faith 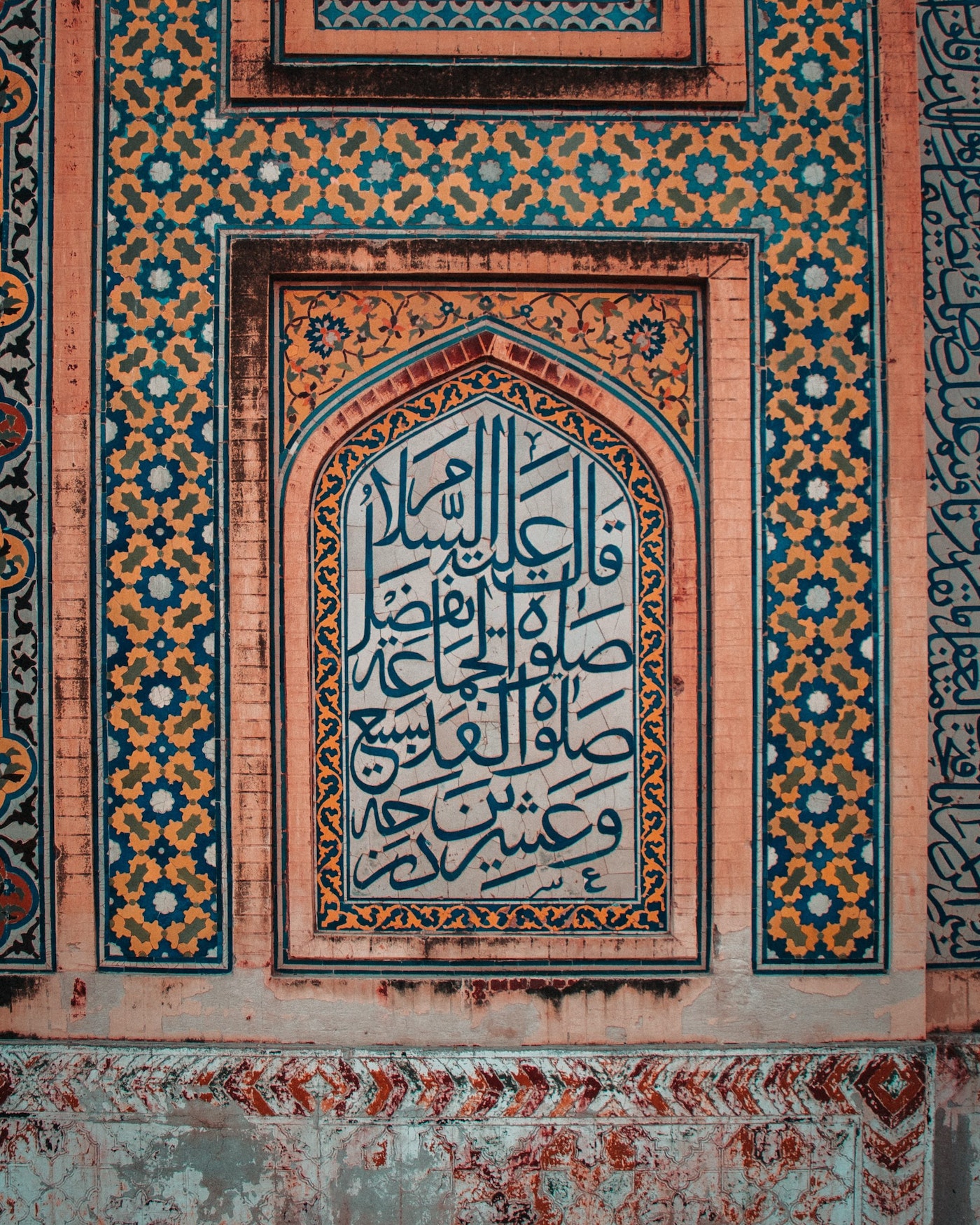 It was while sitting on the ground watching a qawwali ceremony in Pakistan that I became starkly aware of something shifting deep inside of me. I only understood around half of the Urdu poetry that was being sung, and yet my tears began to fall. What I did understand of the words of yearning for the Divine and honouring our beloved Prophet ﷺ  were enough to stir my heart in a way I hadn’t experienced before. The songs and poems themselves were, of course, incredibly beautiful and touching, but the realisation that dawned within me was as much to do with their meaning as it was the language and land they were sung in.

I grew up chronically ashamed of my Pakistani heritage. I was four years old and in a soft-play centre the first time I was called the ‘p’ word, and despite not having any idea of what it meant, the hostility with which it was spoken was unmistakable. I spent a large chunk of my childhood in a very white part of Essex, and as the years went on found myself constantly wanting to hide my ethnic background.

Hailing from the very land that one of the most common slur words referred to had a lasting impact on my perception of my roots. It didn’t feel remotely cool, glamorous or exotic to be Pakistani, and wherever possible I would avoid mentioning it. I recall cringing at the dirty looks received when I went out with family members dressed in traditional clothes, the vibrant shalwar kamees’ and embroidered shawls standing out like sirens on grey British high streets. On rare occasions, such as Eid, when I would don traditional attire,  the moment I needed to go beyond the mosque or home I swiftly changed into jeans and hoodies.

The language and accent made me cringe even harder. Having heard it mocked and cruelly imitated while growing up, again, I distanced myself from it. My maternal and paternal families speak two different languages, and in our home mostly English was spoken. As a result I evaded any deep connection to either language. I enjoyed snippets of aspects of culture, from sweet halwa to sparkly bangles, bhangra music to flowy lengha skirts, but in hindsight, I had deeply rejected my heritage. In doing so, I had deeply rejected a major part of myself. I lacked any sense of pride in my ancestral culture.

As I got older and studied colonial legacies and their profoundly damaging impacts on the psyche of the ex-colonised, things began to make more sense. Being born into a relatively racist and bigoted area had only served to exacerbate the lingering lack of self-worth that I inherited from the traumas of empire. British rule left violent scars on nations, hearts and homes, and these compounded with the subsequent immigrant experience in Britain can very easily result in subtle self-loathing.

By the time I went to university, another prong was solidified on the fork that I allowed to subjugate my cultural identity. At this point I was actively seeking nearness to God through faith and practice, but the mosques and communities I found myself in, like many up and down the country and indeed, around the world, were heavily influenced by Saudi. A less obvious impact of the harsh reach of Wahhabism was on cultural pride and sense of worth. I’m reluctant to use the term ‘Arabisation’ to describe this phenomenon, as it feels flawed and in line with harmful orientalist tropes that homogenise the culturally diverse and rich Middle East region into a singular monolith. Perhaps Saudi-isation might be more appropriate, as a degree of piety and purity was associated with various Saudi cultural superficialities.

I felt a sense of belonging and acceptance in wearing an abaya in place of baggy jeans and long tops, in using Arabic phrases in everyday speech, and in listening to nasheeds in Arabic. I associated anything beyond the pseudo-Salafi remit with deviancy at worst, and inferiority at best. On this toxic, suffocatingly narrow path, my non-Arab cultural heritage became even heavier unwanted baggage for me. I fell into the trap of reducing a complex, layered situation to a binary one. Black and white, pure and impure.

Anything that wasn’t distinctly Saudi Islam was lesser and didn’t belong, and that included my entire cultural heritage. In order to become a better Muslim I assumed that I needed to leave behind Pakistani culture. My sense of self as an ethnic Pakistani now subconsciously felt even more worthless than it had as a child, it became even more marginalised within the sphere of my identity.

It took me a long time to truly come to terms with the fact that I had been living with self-loathing. Being Pakistani was not something that I could be rid of, not something I could shed and leave behind. It will never change or leave no matter how hard I deny and abandon it. Nor is it something of little consequence, a minor detail to sideline in who I am as a human. Through a recent visit to Pakistan, the wisdom and guidance of Dr Umar Faruq Abdallah, and of course, the grace of God, my heart changed. My heritage is a rich and vibrant gift from God, a means by which to enhance my worship rather than a harmful distraction from which to purge it.

“And of His signs is the creation of the heavens and the earth and the diversity of your languages and your colours. Indeed in that are signs for those of knowledge.” [Qur’an 30:22]

Instead of ignoring my roots, I now feel a burning desire to run towards and reclaim them. I want to embrace them fully and wholly, to drink them in and be infused with the blessed land that God chose for me to hail from. As I listened to the qawwali melody floating around the room, the mesmerising beat of the tabla drum speeding up and slowing down, the heavenly praise ascending to the skies above in the eloquent tongue of my ancestors, it felt as if a veil was lifted within me.

My faith and my culture are not mutually exclusive, instead, they merge and dance and beautify one another spectacularly. The lively songs of worship, soulful laments and elaborate poems of praise are just as powerful, potent and beloved to God in any human language. Shalwar kamees’ can be just as modest as abayas and thowbs, and mosques constructed in magnificent Mughal architecture are no less holy than those of Arab origin. Two aspects of my identity that I’d believed to be at loggerheads with one another for years, were actually harmonious. Just as the beating spiritual heart of Islam was being systematically filtered out, so too was the acknowledgement that God’s creation of rich and varied world cultures is significant and important.

‘For centuries, Islamic civilization harmonized indigenous forms of cultural expression with the universal norms of its sacred law. It struck a balance between temporal beauty and ageless truth and fanned a brilliant peacock’s tail of unity in diversity from the heart of China to the shores of the Atlantic.

Islamic jurisprudence helped facilitate this creative genius. In history, Islam showed itself to be culturally friendly and, in that regard, has been likened to a crystal clear river. Its waters (Islam) are pure, sweet, and life-giving but-having no colour of their own-reflect the bedrock (indigenous culture) over which they flow. In China, Islam looked Chinese; in Mali, it looked African. Sustained cultural relevance to distinct peoples, diverse places, and different times underlay Islam’s long success as a global civilization. The religion became not only functional and familiar at the local level but dynamically engaging, fostering stable indigenous Muslim identities and allowing Muslims to put down deep roots and make lasting contributions wherever they went.’

From Malaysia to Tanzania, Spain to India, Islam flows harmoniously over vivid, dazzling cultures. The result is worthy and wondrous and no less holy or heavenly than distinctly Arab cultural practices.

The journey I took this year to Pakistan was a journey across continents and deep into my being. It was a first step on a long road to healing the wounds that have been inflicted on my sense of self. Discovering the importance of having healthy cultural underpinnings for faith, and how innately we humans crave for this, was invaluable. I saw the beauty of the deserts, mountains, forests and valleys of the country, the varied and beautiful traditions and languages, relics and ruins of rich ancient histories. Through seeing this, I finally saw myself. Fully and wholly. There are songs to be sung, secrets to be sensed in every corner of our world, if only we are willing to witness them.