Becoming the Invisible Woman: The Secret Diary of a Middle Aged New Hijabi 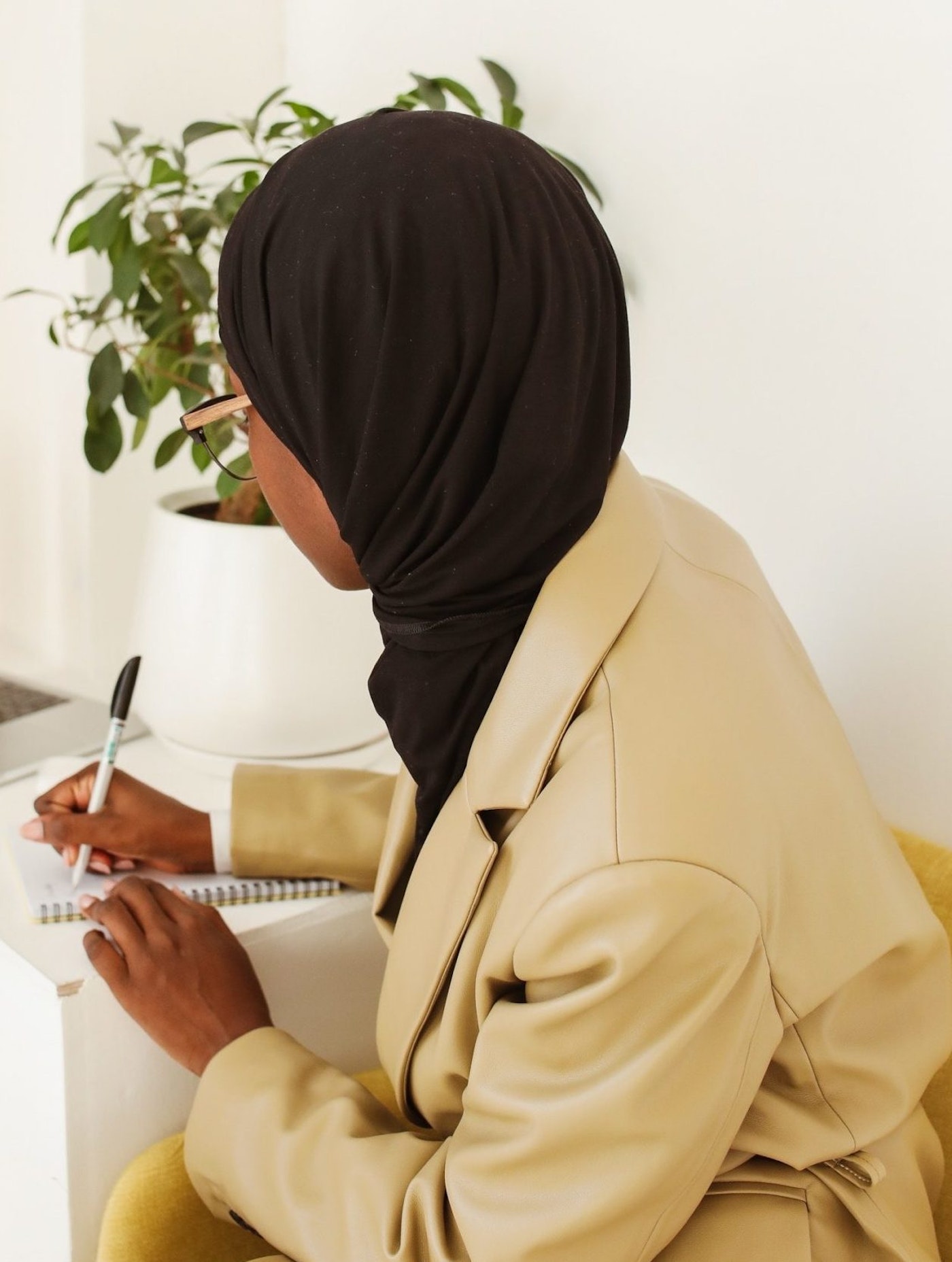 ‘Don’t tell anyone, yet. See if you really manage to keep it. It’s all very easy to start but so hard to keep on.’

This wasn’t the reaction I was expecting from a longstanding hijab wearing friend; the very first person I told I’d started covering. Although I knew her reaction came from a sense of protectiveness towards me, perhaps it also reflected her unease that I’d made the decision while riding the wave of post-Hajj euphoria, still spiritually high from the most beautiful days spent in the two sacred cities.

Most people come back from trips away with coffee mugs or t-shirts as souvenirs, I was returning with some head scarves and an altered perspective. Although I’d occasionally thought about taking the hijab in the past, it had never amounted to anything beyond feelings of guilt and I’m-not-ready defensiveness. However, there’s nothing like going on Hajj to focus the heart and mind on the real priorities in life. Cut out the relentless noise and distractions of everyday life so there’s only one frequency left, and the age old questions are fine-tuned: Who am I? Where am I headed? What’s next?

To be surrounded by over two million fellow pilgrims, gathered from every corner of the world, striving solely for Divine Pleasure and Mercy, is an indescribably humbling experience. Retracing the steps of the beloved Messenger ﷺ, in the hushed tawaf around the Kaaba, every superfluous thought drops away to be replaced by a complete flattening of the ego and a sense of utter humility.

The intense gratitude and an overwhelming sense of my complete insignificance in front of the Divine Majesty created a swirl of emotions. I had truly never felt more alone, or more loved than I did in those moments. Of the innumerable blessings granted to me through no effort on my part, the greatest was to be given a choice, the ability to decide how to live and choose which path I wanted to take.

Despite those precious, spiritually euphoric moments round the Kaaba, other thoughts jostled for attention when I was back in the hotel. But what would people say? And even if they didn’t say, a woman in hijab is such a politically potent symbol, often caught in the hate triangle of racism, misogyny and Islamophobia. I was bound to face some overt hostility, exclusion, or at the very least rudeness. There was a time I knew certain choices would halve my social circle instantly and would’ve hesitated.

But moored in the calm waters of mid-life, I frankly didn’t care what other people thought. If friends drifted away because of a scarf on my head, well, maybe those weren’t friendships worth pursuing anyway. And if random strangers were aggressive or rude, I could deploy the Prophetic method of a beautiful response instead of unleashing a torrent of abuse in three languages.

Any lingering worries I had were eased by my Hajj group scholar who gave me the Qur’anic background of the veiling verses and practices of the mothers of the believers, may Allah be pleased with them all. As our discussion turned to cultural and historic norms in Muslim lands, the impact of colonialism on women’s clothing came into focus. Shedding head coverings, whether turbans for men or veils for women, had long been symbols of progressive modernity.

Starting from the days of colonialism, some educated, elite women chose to cast off their Dupattas, scarves and hijabs as religious practices and beliefs were relegated to the private, domestic sphere or to old fashioned, rural, poorer women. The more I thought about it, the more certain I became that I was ready. It was time to think for myself, to choose to live fully according to my beliefs rather than vacillate. It was time to cut through all the secular feminist discourse, defensive white feminism, the post-colonial cultural norms, societal expectations and rely completely on An-Noor, the One who guides, to illuminate the path I was setting out on.

Any self consciousness I felt on my first outings as a hijab wearing woman in London was quickly dissipated by people’s complete lack of interest. No one at the cafés, petrol stations, shops or grocery stores cared. For this I am eternally grateful to the long line of proudly hijab wearing women who bore the brunt of stares, glances, awkwardness and outright hostility and made ‘us’ part of the visible, social fabric of British society.

The oddest question, to date, has been from a Muslim man, a friend’s husband, who asked which scholar on Hajj had radicalised me so much. I told him, the scholar was younger than us, a northern revert who spoke fluent Arabic, taught and lectured and had more religious knowledge than almost everyone we knew. I just hope it hasn’t put him off taking his wife and daughters on Hajj.

Incredibly, it seemed all my non-hijab wearing Muslim friends had independently, yet simultaneously, adopted a strict don’t ask, don’t tell policy into my reasons for taking it. At times I wondered whether they thought even talking about it could be contagious or contentious or both. In our first, post-hijab meeting they’d invariably utter a sentence from one of the following three options:

Of course, these are all major stumbling blocks for some women, but they are easily rebutted or reasoned away. After all, everyone is on their own journey and all I could do was live my own choice with grace. I didn’t owe them an explanation or a defence for my choice, and had decided to be a non-judgemental sounding board for them.

The most frequently commented on aspect of my hijab has been about all the time, money and worry I’ve saved by not having to think about my hair anymore. These comments, made somewhat enviously, have come exclusively from my non-hijab wearing Muslim friends. As if, once a woman decides to cover her hair, she no longer has to care for it, or needn’t beautify it. As if, all our lives we’d been getting gorgeous haircuts and blow drys and colour treatments just to be beheld by others, for their viewing pleasure?

In those early days, I had a heightened awareness of other women’s hair, noticing it more than I ever had. At lectures, seminars, school events, I’d watch the back of dozens of women’s heads and think almost every other one would benefit from a wash and a cut. Split ends, unkempt hair that could’ve been transformed by a comb, hair dry and stiff as hay, fly-aways, faded dye jobs long grown out intermingled with some truly exquisitely coiffed heads. Meanwhile, I was on the hunt for a good women only hair salon, trying to find the right head covering for running and tying myself up in knots testing out different hijab styles.

Post-hijab it was assumed that I’d have nothing to contribute to or benefit from discussions about new make-up products, anti-ageing eye creams, and wrinkle smoothing serums. Any questions I had about the efficacy of a cream was brushed away with a nonchalant, ‘Oh, you needn’t worry about this stuff now.’ Had I been elevated to a higher plane in skin care by virtue of my hijab? It must be the post-Hajj noor on your face, said my mother when I protested at being sidelined from those conversations. This amusing state of affairs fascinated me. Had I become invisible because of my hijab? Was I now a neutral or non-entity?

People are trained to gauge others’ social and economic status from their hair, clothing and adornments, such as jewellery. A woman who puts on the hijab short circuits this lazy categorization technique. With her earrings, necklace and hair no longer on display, it takes more effort to assign her a place on the socio-economic scale and it’s easier to just look away – I certainly felt this way.

As a non-hijabi, I was frequently aware of people’s eyes on me, or on a piece of jewellery I was wearing and, sometimes, it was flattering.  Now, with the hijab on, I had concealed some of my status and identity markers. And it felt like I’d put on a sign that said, ‘Nothing to see here, move on.’ With the dominant global culture reflected in social media, cinema, music and fashion dictating what ideal female bodies should look like, how they should be presented and dressed – perhaps putting on a hijab is an act of rebellion.

As my female friends and I discussed peri-menopause, lamented saggy body parts stubbornly unresponsive to any form of dietary or exercise regimes, conversations would soon turn to that desperate middle aged mantra of ‘If not now, then when?’ But hopes that this may be the moment the whole lot put on the hijab were misplaced. Instead, as they dared each other to dress more provocatively, to buy those thigh high boots and reassure themselves they still had it, it was clear that so much of our self worth is linked to the male and female gaze, to physical beauty being beheld.

In this regard, I’ve found the hijab completely transformational. It has released me from all the socially induced anxieties with looking older and ageing. I’m working out for myself, dressing up for myself and my spouse, shifting my energies towards beautifying my manners and my soul – much harder than toning those glutes.

And therein lies the challenge, to know that taking the hijab is just a stepping stone on the path of seeking Divine Love and Mercy. It is not the end goal, and contrary to what most of my peers seem to think, it doesn’t make me an instant authority on Islam. I can’t quote Quranic verses and hadiths on the spot to discuss inheritance law, or answer questions on whether it’s permissible to make up fasts once GCSE exams are over. There are as many paths to God as there are humans on the planet. As I reflect back on those blessed days of Hajj, I think of the billions of prayers and supplications swirling, ascending across the seven heavens to Allah. I think of the tiny specks in the universe that we are, and yet Allah promises that if we come to Him walking, He will come to us running. All we need to do is take the first step.

Born and raised in Pakistan, B.B. now lives in the UK. She has degrees in Economics, Development Studies and Creative Writing from McGill University, the London School of Economics and Political Science and Bath Spa. When she’s not reading or writing, she can be found drinking coffee and binge watching Turkish, Palestinian or Iranian films. Her main goal in life these days is to start learning a martial art.