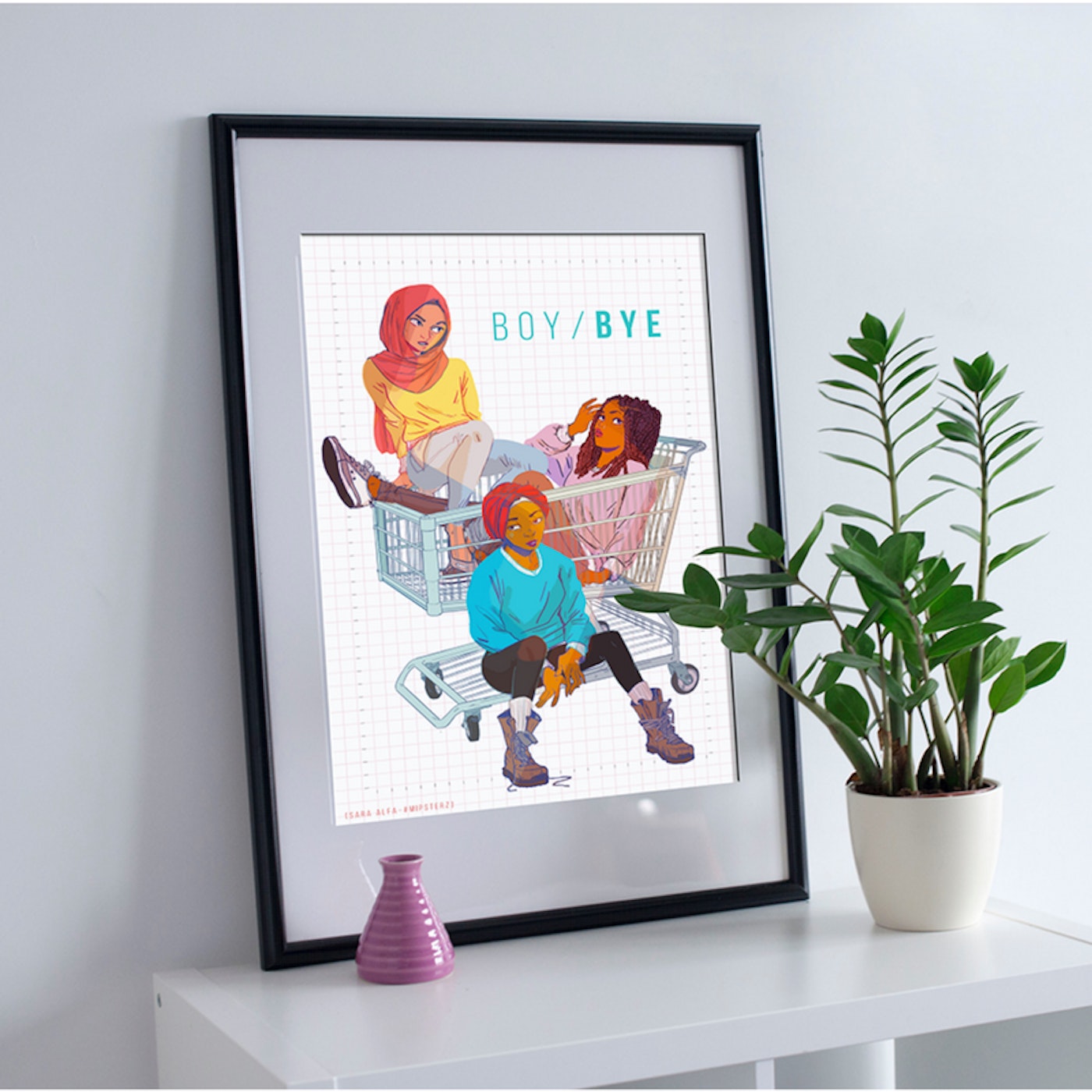 BOY/BYE is a collaboration between Sara Alfageeh, and Abbas Rattani founder of MIPSTERZ, a crossover of ‘Fashion and Activism’, designed to celebrate diversity and individual identity. They launched a Kickstarter to help fund their project and garner interest – where you could pledge certain amounts in return for pins, prints, stickers and much more.

I recently had a chance to chat with Sara, an illustration student based in Boston, USA, and the artist behind the project, to ask some questions about what BOY/BYE is:

BOY/BYE is a product line of pins, stickers, patches and prints all showcasing women of colour. Originally, it was just an idea that me and my editor came up with together as a way we could promote the spaces we have here in Boston, specifically that we’re making for artists of colour. There’s actually a really vibrant community of artists around here, but the thing is that we’ve run out of spaces for them. So we’re trying to get bigger venues and more ambitious projects.

2) What was the inspiration behind it?

The inspiration behind it honestly, is a whole number of things. I’m working with a group called Mipsterz, we link to it a couple of times in the Kickstarter, and one of the earlier projects that they have done was this really lovely, carefree, fun music video, featuring a bunch of Hijabis, women and all types of girls. It was just a really impactful moment for me to see all these women acting carefree and fun, and it’s not a spotlight girls like us often get. So we wanted to extend that notion and also play off what was already existing in pop culture; like you have Beyoncé’s iconic album, and the whole feminist movement that’s pushing more towards positive and diverse representation. 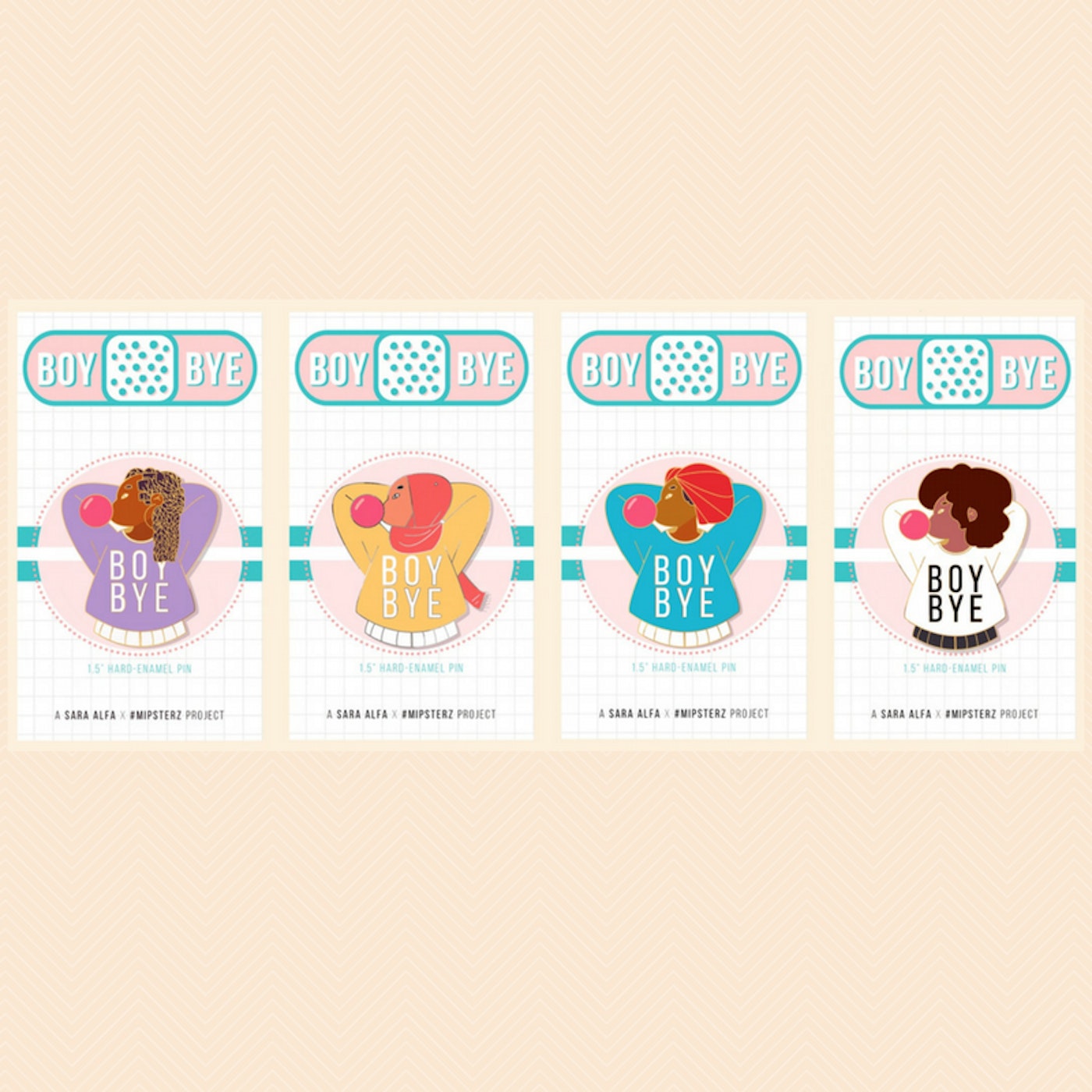 What’s your long-term aim for the project?

Hopefully, to keep more projects like this going – we already have more events lined up with the Mipsterz group. You see little clips and pieces of it featured in our Kickstarter video, where we showcase artists, singers and writers and all types of people. So it’s to keep that momentum going and to show people the kind of work that we’re already doing.

The way that we see it, these people are out there, the voices are out there, you just need to listen to them, and you’re missing out if you’re not including them.

So it’s to be as unapologetic and as individualised through our own projects and hopefully other people see that, and either want to join us or even do their own thing.

In a more concrete way, I’d probably say, after this Kickstarter we would like to do a volume two, because we had about fifty different designs before we narrowed it down to those four. It took us about three months to get everything all together, and during that process there was a lot of refining, reworking all of the art, to make sure but we had was the best that we could do, but we also know there was so much we left out just because of the logistics of it all.

3) How did it all come together? What was the process like?

It was a lot throwing things at the wall, and seeing what would fit. I’m a full-time illustrator – well I’m a student right now but it’s pretty much my career. Me and my co-director were entertaining the idea of a graphic novel, but we ran into a couple roadblocks, where we had a writer, we had a research team, we had everything laid out, but then we realised we want to make sure that when it launched that we had an audience. That was really important to us, to make sure that there were people listening when we were ready to present the work that we had. Initially my idea, and I said well why don’t we take things a little bit slower, and take baby steps, and work up our way to more ambitious projects. One thing led to another, and we started thinking of product lines, online stores, and a friend of mine gave me the great idea of just doing a Kickstarter for it. What’s really great about Kickstarter and those platforms and what it does for artists like us, is that you only make what people want, and ask for and are literally pledging for, so you can’t deny that there is a demand for it. 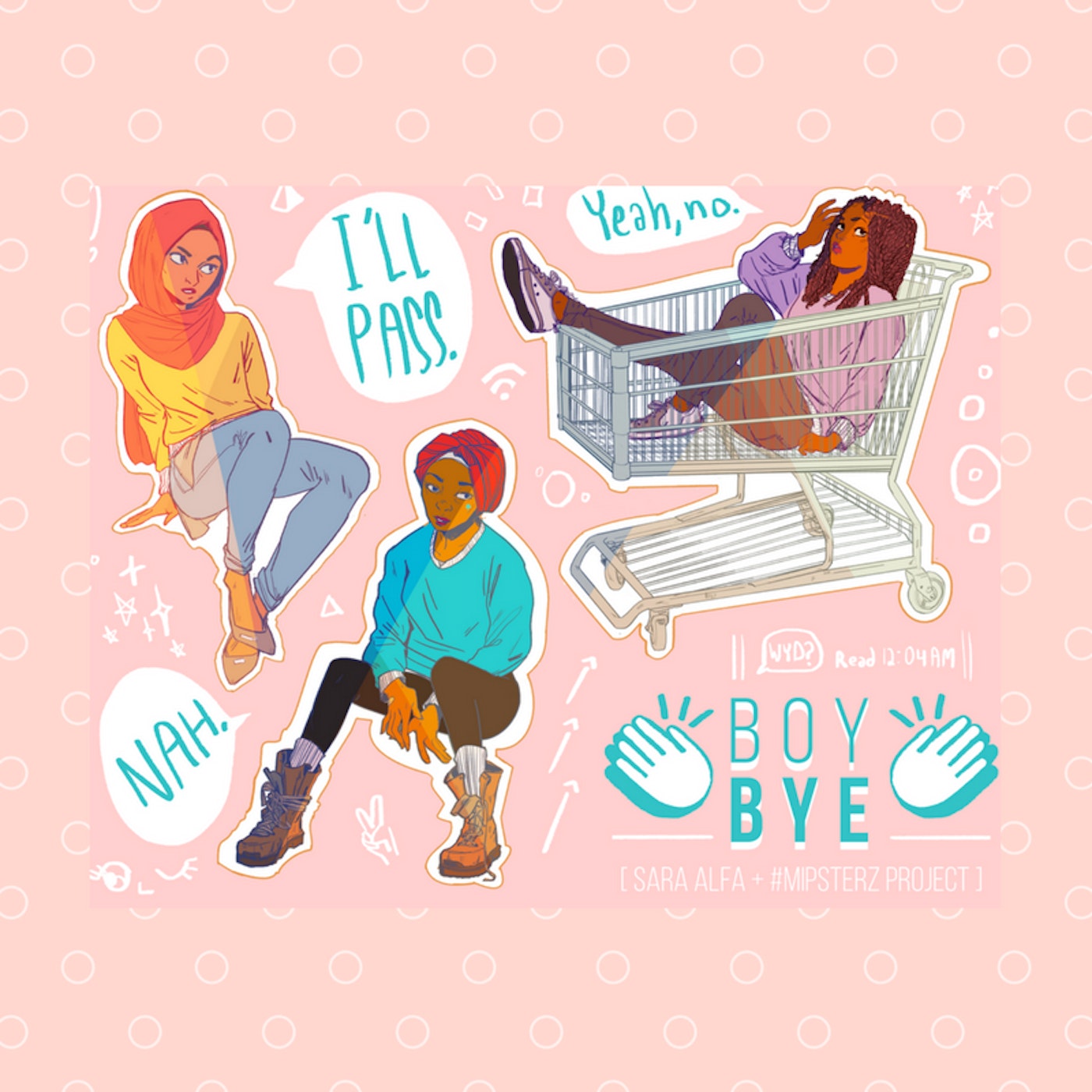 4) So will we hopefully be seeing a graphic novel at some point?

Yes, that is in the works. We have quite a few things lined up! We could go forward with it, it’s just the matter of making sure that when we do make our big splash, we have heads turning in our direction. And I think it’s important for artists to do that,  specifically people with marginalised identities, to make sure people are tuning in to what they’re doing, what they’re contributing.

5) Did your own identity have any influence on the project?

Yeah of course. I actually have a very complicated relationship with including my own identity in my artwork. It’s actually something I very much resented doing for a very long time, I ran into this weird thing where that was what everybody expected of me. I would have people from the Muslim community be like, ‘oh you know you need to represent us as one of the few people in the art community, and I would have people in the art community say to me ‘oh you need to talk more about your identity’, and I was like, ‘ I don’t want to do either of that, I just want to draw some dragons or some shit’.

It’s incredibly confining and frustrating when people project an expectation on you, and obviously that’s something quite a few people of colour can relate to.

I don’t know if you’re aware of the comic Ms. Marvel (comic book series featuring a Pakistani Muslim superhero, Kamala Khan) – I am an absurdly huge fan. So I got volume one, freshman year of college, and it just blew every expectation out the window, it was so incredibly important to me. It clicked something in my head, I realised that the reason I resented the idea of including my identity in my work, was because I’d never seen it done successfully. I’d never seen a good story with someone I can identify with featured as a protagonist that I can look up to – someone that is funny, kind and an ideal protagonist.

It was especially important to me that she wasn’t a Muslim superhero; she was a superhero who happened to be Muslim.

I hold that idea very near and dear to my heart, and I make sure that when I am doing any of these projects that I’m not trying to feature Muslim women.

It should just be a very normalised thing to include all these groups. I’ve realised that whether I like it or not – anything I do is going to be politicised, so I might as well be in control of that space and be able to own the narrative that other people are trying to project on to me, and I think that’s a lot of what we are doing here at BOYE/BYE. You really  can’t underestimate the power of casual representation – I don’t want to make a statement about women of colour, that’s not what I’m doing. I’m putting the artwork out there, and letting it be whatever it needs to be, for whoever’s viewing it. We use the phrase ‘accidental activism’ – coined phrase by my co-director, where I’m not trying to do anything intentionally political, but I can’t deny that when I’m putting the work out there, what it does for other people. The impact is there and exists for a reason and you can’t deny it.

Find out more about MIPSTERZ