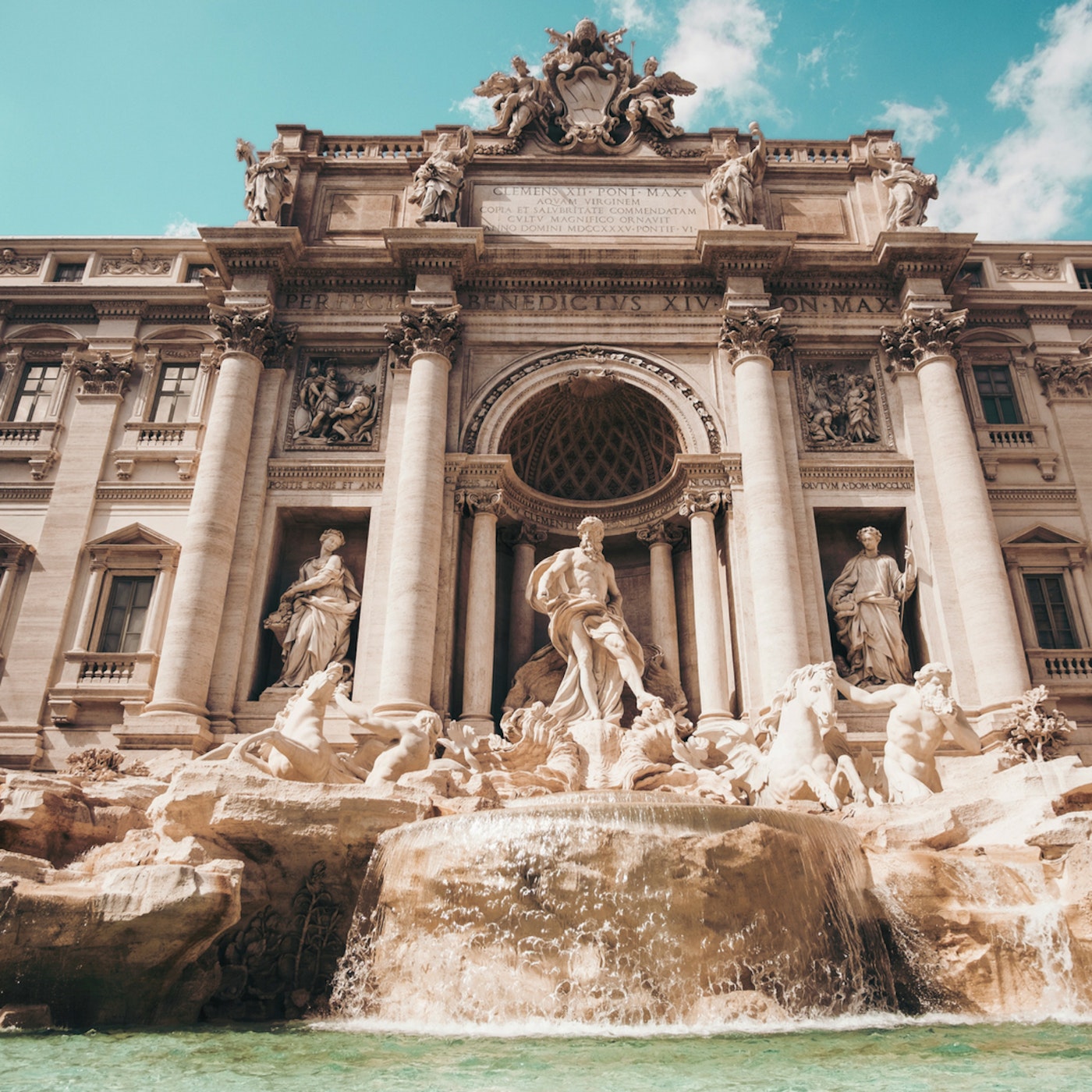 Having gotten a delicious taste of Italy while travelling to Sicily, Venice and Milan together previously, my girl Dian and I decided to set aside five nights to venture to Rome and Tuscany – here’s what happened.

Arriving in Rome, we got the express train from Fiumicino Airport to Termini Station (duration: 30 minutes/cost: €14) and set out to find our way to the Best Western Globus Hotel which was said on their website to be ‘nearby.’ 20 minutes later I had a dead battery thus no Google Maps and subsequent anxiety, but we managed to navigate ourselves through the eerily quiet graffiti-splattered streets to our base. On the subject of Google maps and the convenience of internet usage abroad, I’d recommend Three as a network provider for their ‘Feel at Home’ service alone.

We were pretty knackered on our first day so excitedly grabbed some food when we peeped a Halal sign near Termini. I got a diavola pizza whilst Dian got a lamb biryani because only a sick human being would order a curry as soon as arriving in Italy. Both were so greasy that we left with a higher chance of heart disease – stay away! There was one unforgettable dining experience we had near Termini though – and that was at a Peruvian restaurant called El Norteno – yes that’s right it wasn’t Italian, but it was better than any Peruvian food I’d had in the UK.

We shared seafood paella adorned with the likes of whole octopus alongside a dish combining a variety of battered seafood, potatoes and cold fish in a pink tangy sauce (ceviche). We enjoyed the dishes alongside Peruvian Cola Inka, which I really like even though it looks like pee.

We didn’t hang around Termini much after that. Factoring in the tourism revenue the Capital must get, I just didn’t understand what I saw. A large part of the outside of the station reeked of urine, serving not only as a waste disposal but as a home for many of the homeless and an obvious base for the dealers of the city. Every morning the queue of people outside the station waiting for free food was extraordinary, particularly when you’ve seen the riches of Rome. On our first full day we found a hop on, hop off bus, which I was recommended to do. Big mistake. If you’re remotely self-efficient abroad, there’s just no need. We paid €31 for 48 hours of use of the bus, which has ridiculous queues every morning.

We soon discovered how quick and easy it was to get anywhere via the Metro for €1.50 a trip. You’re better off picking up a bus flyer and deciding which stops you’d like to do yourself and planning accordingly if anything. Rome is an easy city to navigate around.

The first stop of the day for us was Palatine Hill, across the road so to speak from the Colosseum. I read the following advice on TripAdvisor and I can confirm it’s true – you’re better off purchasing a combined ticket for both the Colosseum and Palatine Hill at the latter’s entrance; this way we strolled right into the Colosseum past the dozens who were queuing for a ticket. As we were under 26 years old and apparently still classed as young people (wahey) we got discounted tickets, which was a great bonus – you’ll find many tourist destinations across Italy offer this. Tickets sellers approached us frantically in the dozens, claiming they were the only avenue to take should we want to skip the queue… We gave up on the offer of €36 each, which was at least less than what we saw others pay. This price took us straight to the front of the queue to enter the Vatican, where our tour guide Charlotta spent 90 much-needed minutes to talk us through the history of everything on the grounds, from the gardens to the museum’s historic art.

She then allowed us to have 20 minutes to absorb the Sistine Chapel, which I appreciated all the more following our lesson on Michelangelo’s vision and the amusing personal elements he incorporated into the ceiling. When Biagio de Cesena (Papal Master of Ceremonies) complained of the nudity within the artwork, the artist responded by portraying him as Minos, judge of the underworld, in the art – much to Cesena’s fury. Finally, Charlotta escorted us through the tour group entrance to the Basilica, bypassing the hordes of tourists queuing. Exquisitely grand, we took every inch in as efficiently as we could and grabbed a couple of selfies before ravishing an overpriced thus shared portion of vegetarian lasagne at St. Pietro’s Café outside the Vatican – avoid unless you are really starving like we were! On Wednesday morning we strolled to Termini to collect a car from Auto Europe which we had sorted online prior to our departure.

We had the car from Wednesday morning until Friday evening, which set us back around £60 (not including excess insurance, refilling the tank and the tolls we paid on the A1 when going from Rome to Tuscany). Initially requesting an Alfa Romeo, we were given a pretty scratched up Opal (Vauxhall?) family car which was HUGE THOUGH. After we got used to the size and understood that native drivers will swerve into you whenever they damn well feel like it and you better get over it, our journey to the Golf Hotel in Florence was smooth, taking around 3 hours. The main annoyance was a road toll of €17.80.

We chose the Golf Hotel because they had free parking, which seemed to be somewhat of a gold mine as you approach the centre of Florence. Arriving at lunchtime we visited Trattoria Mario, which in hindsight was a mistake because it was all about the meat, which we couldn’t have (halal gang). However, it had been recommended by a local and the 20-minute wait for a table further confirmed its popularity. The menu changes frequently, and our best option was cheese and tomato pasta which was more sophisticated than it sounds, alright? A tiny jam-packed authentic establishment that reminded me of the Italian restaurant in Lady and the Tramp, we were placed on a table with a cool American couple who were diving into the most mouth-watering steak I had ever seen. I vowed to find a halal alternative.

A romantic taste of authentic Florence, I recommend Trattoria Mario for the meat eaters. Next up we went to Di Santa Croce – a worthwhile visit to pay respect at the tombs of the greatest to ever do it. Who am I referring to? Oh, just Michelangelo, Machiavelli, Rossini, Galileo… It was quiet when we went and we had the luxury of joining a free tour hosted by an enthusiastic woman from the States. Since we received an under-26 discount, we purchased a combined ticket which also allowed us entry into Casa Buonarroti, a museum owned (though not occupied) by Michelangelo, which he left to his nephew Lionardo Buonarroti. Almost empty, Casa Buonarroti had an intimate feel, like it was an undiscovered treasure. Afterwards, we saw the lengthy line outside the Accademia Gallery and decided to reserve tickets for the following morning to avoid the dreaded queue. Dinner was at Osteria Dellolio around the corner from Florence’s Duomo – this was where we found our halal Florentine steak after an extensive online search and questioning on arrival. Arriving on a sizzling plate with rosemary seasoned potatoes, it was phenomenal and we pretty much fell in love. It was the Beyoncé of steaks. I literally recall deliriously shouting ‘Beyoncé’ when it arrived. That’s meat deprived Maz for you.

On Thursday we left our dull albeit clean Florence hotel and went to see Michelangelo’s David at the Accademia Gallery right away. I was thankful for our reservation which got us in within five minutes – the under-26 discount we received balanced out the €4 booking fee.

Everyone will tell you the David is a must see, and honestly, I am not here to tell you any different. Go. We sadly had to say goodbye to Florence after time in the Accademia Gallery; hopping in the car, we made our way to Pisa. Free parking can be found a ten-minute walk away from the tower itself. We didn’t pay to go up the tower, because  someone has a fear of heights. That aside, I didn’t think it was worth it – we got to see its main attraction – its tilt-up close and personal. Besides, the weather was something out of a masterpiece itself, so we stayed out to enjoy the perfect blue sky, dancing butterflies and random monuments.

But Friday! Let’s talk about Friday in Tivoli. Man, Tivoli is sexy. Obviously, Rome is filled with precious sites but we wanted to get away from the madness of it all on our last day, so after a much-needed lie in we drove to Hadrian’s Villa, around 30 minutes from the centre – the setback was a toll cost of around €2 and parking of €3. Heavily inspired by the ancient Greeks and Egyptians, it’s an enormous space (twice the size of ancient Pompeii) of glorious remains rustling with wildlife. Well worth it – we only wished we had packed a picnic and had allowed ourselves more time to explore.

But we didn’t have more time – we wanted to make our way to Villa d’Este by the town square in Tivoli, which allowed us to drive higher and catch some more awesome views. We found free parking just off the main road for an hour, which suited us as that’s all the time we had before we had to make our way to the airport. Another one on the UNESCO World Heritage List, Villa d’Este is adorned with artistic references from the Renaissance era, with great views and stunning fountains that we wanted to dive into on that fiercely warm day. The whole day was a bit rushed and if we had more time Tivoli would have had our undivided attention all day long. But sadly, we were headed straight to the airport to drop the car back and catch our flight.

Finally, I’d also like to mention that we received two parking tickets on our return – apparently we were speeding somewhere in Pisa… Not only did we receive two tickets, but two €48 ‘admin fees’ from the rental company. Be careful out there!

This Interior Designer Shares Her 5 Design Tips for Your Home

By Shahina Style and Form