#Knifefree Chicken Boxes Are Being Rolled Out by the Home Office 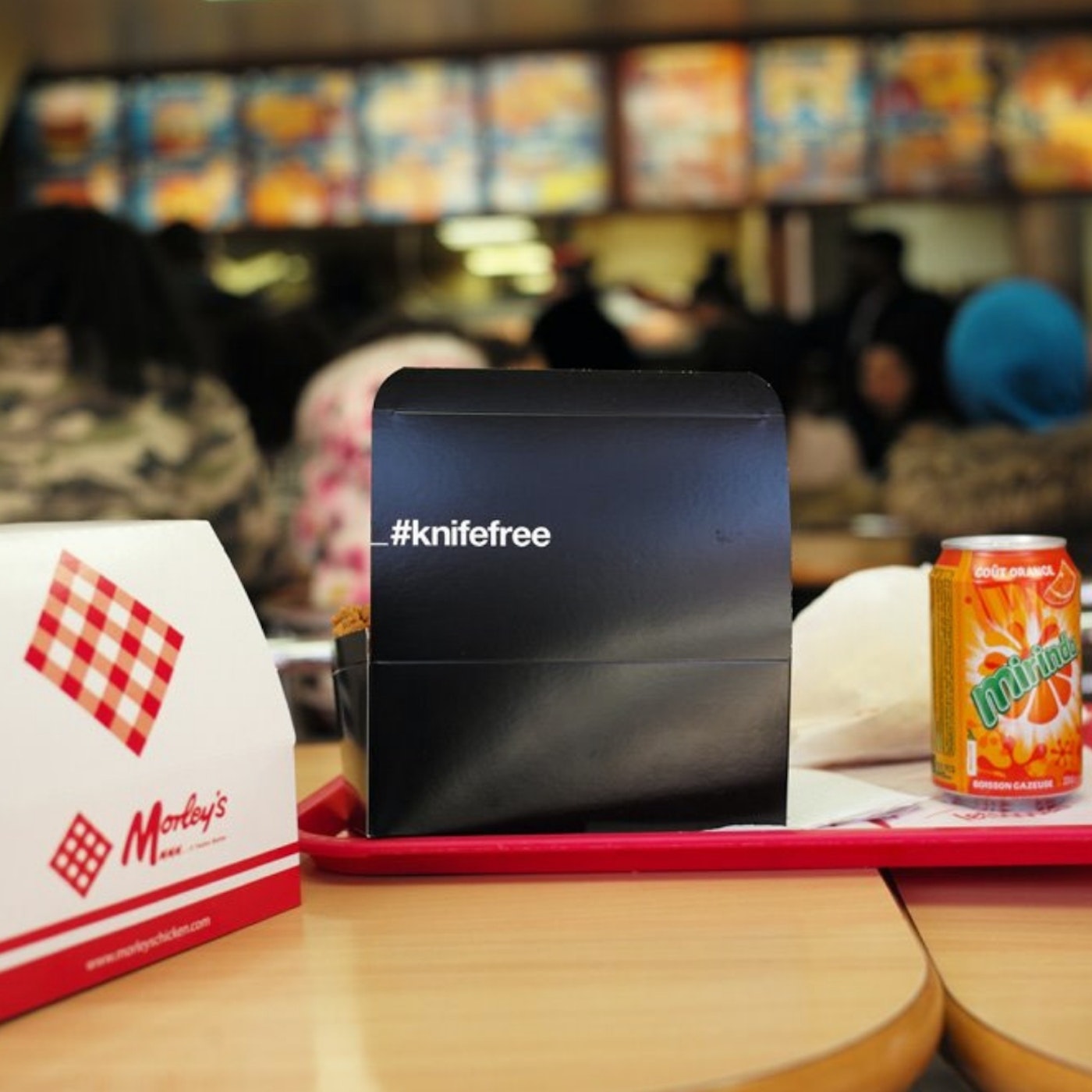 This week the UK Home Office announced their latest attempt to tackle knife crime. The official Home Office Twitter account announced the release of 321,000 branded boxes destined for chicken shops across England and Wales which have #knifefree on the outside and positive stories of young people who have chosen other paths and activities over knife crime on the inner side of the boxes. MPs and the public began to share their thoughts and ideas on the recent campaign. Outlets such as Chicken Cottage, Dixy Chicken and Morley’s are some of the partners.

The campaign had been called out for being racist, crude and offensive, while others have commented that the funds and resources are misplaced and should instead be put into charities, community centers and grassroots organisations.

Diane Abbott, the Shadow Home secretary shared that the plan was “crude” and “offensive”.

Instead of investing in a public health approach to violent crime, the Home Office have opted for yet another crude, offensive and probably expensive campaign. They would do better to invest in our communities not demonise them. https://t.co/dGZBo3IypV

Shame to see @HackneyAbbott playing politics with knife crime. I will do everything in my power to stop it traumatising communities – recruiting 20k officers, empowering police to stop & search, communicating tragic consequences of carrying a knife. I will not apologise for that. https://t.co/1wsBF1IzZe

Kelechi Okafor, Actress and Founder, of Kelechnekoff Fitness Studio raised that the MP was “…just anti-Black”.

You actually said “playing politics” when we all know you meant playing the race card. Why? Because knife crime is a political issue and you are clearly going to be on the wrong side of history with your trash heavy handed and tone deaf approach. Sad times.

Someone also pointed out this had been trialled in 2010.

The idea of warning people off knife crime by putting messages on chicken boxes is not only stupid but unoriginal. This is from 2010. Put me right off my three-piece variety meal. #knifecrime pic.twitter.com/DA9OPwZ3wl

Is this some kind of joke?! Why have you chosen chicken shops? What's next, #KnifeFree watermelons? https://t.co/34DwwxSmCN

Would you like to write for us on the topic? Pitches can be sent to [email protected]

“This is woefully short-sighted and actually pretty offensive. Why chicken shops? I’d love to hear the reasoning behind this. Also I have to agree with Hirra Khan Adeogun where is the money that is needed to improve the lives of young people ? Young people – from every race – who have been let down by a lack of care. Money for CAMHS and schools is urgently needed in particular. Too many young people growing up believing that they have nothing to live and that nobody values them is the root of the rise in knife and gang-related crime. The Home Office would do better to spend a day listening to ex-gang members and realising what their lives were like before they were drawn in. No chicken box is gonna stop this issue until more is invested in young people who need support.”

The tables have turned . . My take on the #knifefree campaign. Imagine if the campaign targeted a demographic of people with the assumption that they are ENTIRELY responsible for putting an end to prejudice. The knife free campaign targeting chicken shops is A) Creating an assumption that the footfall is more likely to be involved in knife crime B) Holding that demographic accountable for putting an end to it C) Framing this demographic as the problem. D) total waste of money . . Why didn’t the campaign target an assumed demographic that holds a large amount of institutional power structures that do not see their potential to make a difference by passing the mic and opening doors to create windows of opportunity to those who may not have direct access to that? . . #homeoffice #campaign #parody #prejudice #ad #advert #socialchange #socialimpact #fail #chickenshop #offensive #news #inthenews #foodforthought #chickenbox #perspective #perception #power #institution

When Glasgow was the #knifecrime capital of Europe were fish and chip shops targeted with these #KnifeFree stories?

There are no actual words to describe the mess that is the chicken box #KnifeFree campaign. This government has wasted millions, millions that could have been invested into communities where poverty drives them to such lengths. How anyone can support this government is beyond me.

🤦🏻‍♂️
Can we also put stories of the effects of colonialism on the rest of the world on the back of Waitrose essential Yorkshire puddings? #KnifeFree https://t.co/rX3xHHxNv3

Well there you have it folks. This campaign was made by idiots. Massive racist, well paid idiots. https://t.co/0r1oGzl1kf

They threw out the chicken because they wanted to keep the #KnifeFree boxes as a reminder to take home. https://t.co/3dMHZEoO27

So looking at the marketing company that behind this #knifefree campaign together. 🚩 Wtf "Ethnics"? pic.twitter.com/vIryuddQpy

Imagine thinking that partnering with chicken shops to tackle knife crime via packaging was the go to instead of investing in youth services and education. Our government is clapped example #957393. #knifefree

#KnifeFree chicken boxes?? Did Home Office actually pay someone our tax money to come up with this insulting and vacuous idea? If this is the best Priti Patel can come up with for tackling #knifecrime we’re well and truly screwed under this govt 😱 https://t.co/lbTKkdAhT7

I was going to commit knife crime until I read *squints* 'Sean's true story' on a takeaway chicken box.