by Tuscany Bernier in Fashion on 30th September, 2019 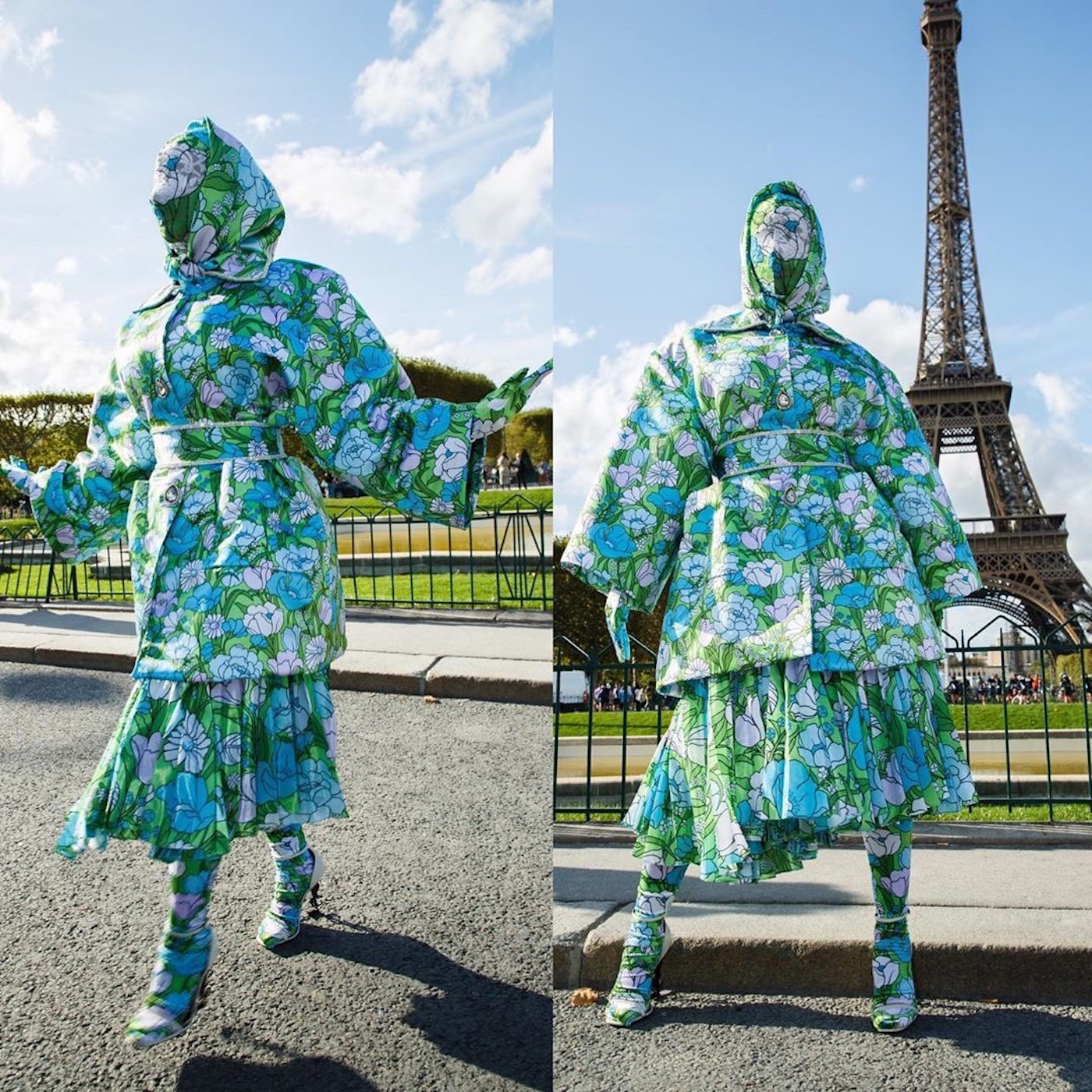 In the heart of Paris Fashion Week 2019, one floral ensemble worn by the famous Miss Cardi B was turning heads. She was wearing an original from London-based Richard Quinn’s Fall 2019 Ready-To-Wear collection in the heart of Paris. This outfit covered her from head-to-toe in what many commentators called a “full bodysuit”, but as a woman familiar with hijabi fashion trends, it seemed different to me. The look clearly took from a lot of the most popular fashion trends from all over the Muslim-majority world.

There was a coat with bright sparkling buttons, a modestly flowy skirt, matching gloves, patterned flats, leggings and a headscarf neatly tucked into the front of the coat. Her face was also covered with the same soft blue fabric that the rest of the outfit was made out of – literally everything matched in the most high-fashion way possible. Photographers and paparazzi surrounded her as she posed and crossed the street in her flower-covered apparel.

It was not lost on me that the crowd, who oo’ed and aaah’ed at her new avant-garde attire, would balk and tighten up at the sight of an equally covered Muslim woman. In fact, if a woman like me, a woman who wears the niqab, goes out in public at all in Paris, she would have the police called on her and she would incur a fee of 150 Euros for daring to go outside. If she dared to go outside more than once, the fee would increase for being a repeat offender.

Cardi B joked, “I heard you b— were missing me at Fashion Week New York. I’m here to serve it to you m–f–, and serve it to you cold.” She also joked about not being able to see if cars would hit her as she crossed the street.

It is worth mentioning that she was not fined for covering her face nor did she bring up the ban in front of the press at any point.

I’m not mad at her, but I am mad at the system that celebrates her unconventional choice in fashion while they rush to call the cops on women who wear the niqab for going to the grocery store.

At least niqabis can see when they walk around, which could not be said for the outfit from Richard Quinn’s highly-covered fashion line-up. Women with face-veils are banned from parks, shops, cinemas, restaurants and public transport under the French law that is still in motion today. Women have been arrested and faced major fines for this law before.

The ban on face veils has since been deemed a violation of human rights by the United Nations Human Rights Committee in 2018, but this has not stopped France from continuing their ban.

As of this year, the face veil has been banned in at least 15 nations across the world… pic.twitter.com/pVMX9lA6zV

Back in 2009, Former President Nicolas Sarkozy stated that religious face veils were not welcome within France and claimed the law would protect women while protecting Laïcité or the French values on secularism. Around that time, poll estimates were claiming that over 80% of France approved of the ban on face-veils.

In the ten years since the advent of the first #BurqaBan, there have been subsequent bans on face veils in various capacities in Tunisia, Austria, Denmark, Belgium, Tajikistan, Latvia, Bulgaria, Cameroon, Chad, Gabon, Netherlands, China, Morocco and Sri Lanka. The claims are repeatedly about national security and protecting women, but nobody talks about how these bans keep women at home out of fear of being arrested or fined for being in public. These legislations have not increased national security in any state where they were introduced. Often the tensions worsened as attacks from islamophobes towards veiled women became more prominent.

I saw this picture of Cardi B outfit in Paris where she was fully covered head to toe. So France has no issue with someone choosing to cover up for fashion purposes but when a Woman chooses to cover with a Hijab or Niqab – France, a supposedly Liberal society bans them?🤔

In one country, Latvia, it was said that there were only three niqabis in the entire country at the time of the ban on face veils. An entire legislative process for three women who didn’t even do anything, but I suppose it was easy to throw three women under the bus to help people pretend like they’ve helped national security.

People often assume the line is to be covered or uncovered in these societies, but the reality is some of these women just don’t go out anymore. Women who wear the niqab are not allowed to exist in public by the governments who have sworn to protect their freedoms. The limit is not this small cloth one wears, but the mindset of the people insisting on infantilizing women’s choices and deeply held beliefs.

Frankly, the Paris Fashion Week incident felt particularly tiring after seeing Cardi B teaming up with Post Malone for French Montana’s latest song, “Writing on the Wall”, from his upcoming album, “Montana”. “Montana” debuts on November 9th. The album cover art for this album is French Montana sitting on a bench, surrounded by women in all-black niqab.

'MONTANA.'
A new album by @FrencHMonTanA.

In French Montana’s three and a half minute trailer for the “Montana” album, the women are dressed in an all-black niqab style. These covered women that he uses as background props are wearing bright red, thigh-high stiletto boots with their long legs folded the same way for added effect. It was not lost on me that these women never speak or even make a sound the entire video.

When he tweeted his new cover art, he emphasized, “You don’t have to change who you are. You can bring people into your own world.” However, the style the women were wearing in his music video were not even Moroccan in origin. They were all wearing a Saudi-style niqab, instead of the more common soft white niqab seen in North Africa traditionally (see the al-Hayek version of the niqab). He notably has not spoken out about the current niqab ban in Morocco either.

This week taught me that the niqab is only acceptable if it isn’t an actual Muslim wearing it. What is unfashionable is my shahada (declaration of faith) and not my actual clothes. If rappers can cover their bodies from head-to-toe and use my sisters in faith as sexualized props for a music video, then why can I not walk the streets of Paris still? Niqabis are tired.

What are your thoughts?

If you’d like to write an article for Amaliah.com on this topic or others please send pitches or articles to contribute@amaliah.com

Tuscany Bernier is from Indiana where she lives with her husband and two cats. She was born and raised in central Indiana. Tuscany holds an associates degree in Islamic Studies and is passionate about cultural diversity and women’s studies. Twitter @notyourniqabae IG @TuscanyBernier