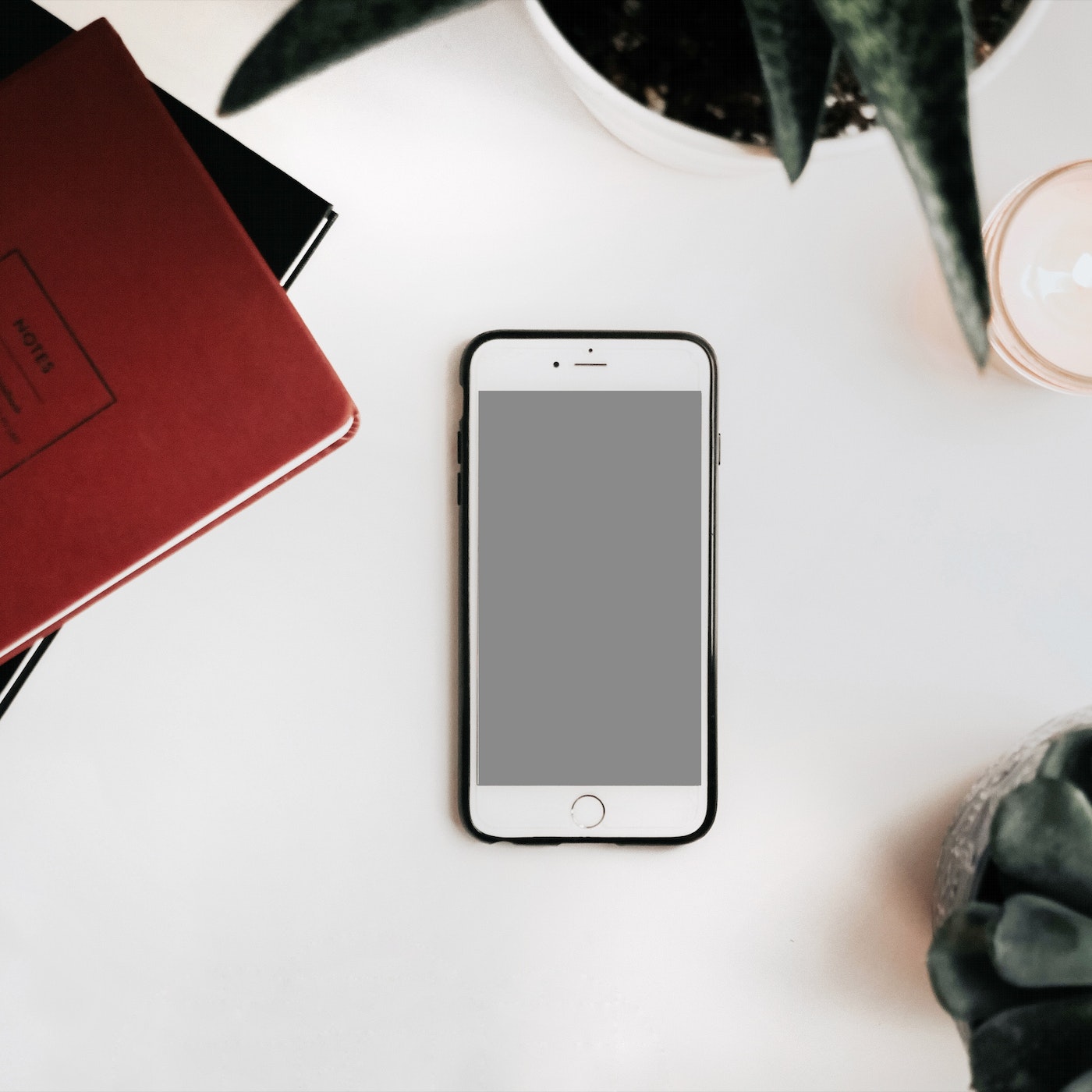 As the general election approaches on the 12th December, many have been encouraging the masses to register to vote, from highlighting all the different people who can vote to research on marginal seats and tactical voting. It is said there is a huge untapped potential in those that do not vote along with young demographics and also the Muslim community. This week Corbyn also highlighted that the leaders of Liberal Democrats and Conservatives, Jo Swinson and Boris Johnson, respectively, have not once tweeted encouraging to vote, raising the question of who loses out when such groups do not vote?

Whilst people have taken to campaigning on social media, one Muslim man, 29-year-old Raafaye Ali, has decided to take an alternative and somewhat unorthodox approach. Ali has taken to Muslim dating apps to literally slide into DMs of Muslim women urging them to vote. He’s also been going the extra step to ensure that those with apathy towards voting are told why their vote matters. Genius or annoying? 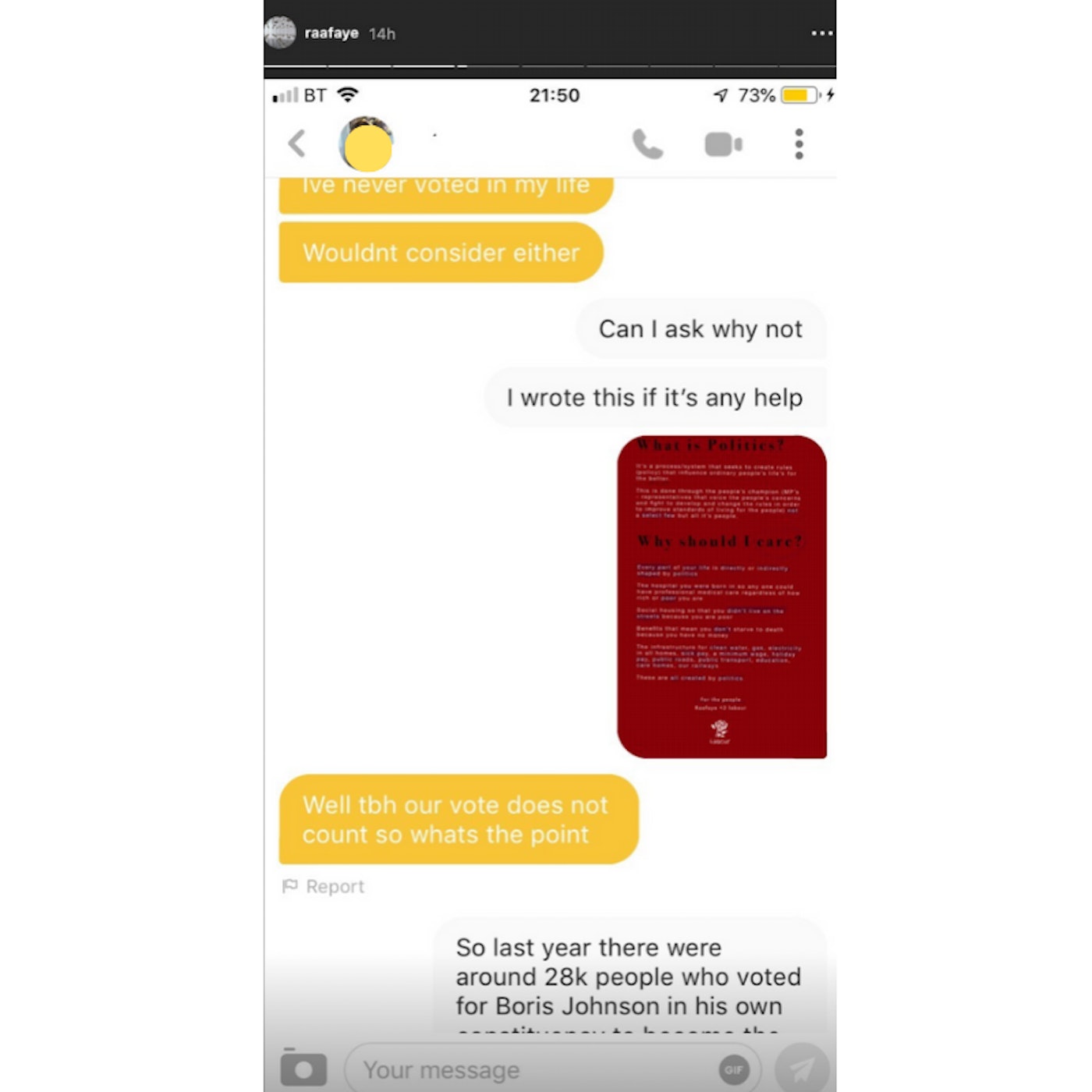 We asked Ali what made him take this approach and he said, “Dating platforms are generally a space where I match with Muslim women outside my bubble. I have a conversation and a lot of the time (99% ) it goes nowhere or naturally just sizzles out, but these are generally Muslim women who may be in completely different echo chambers to mine where they aren’t following platforms like Amaliah or have politically engaged friends and family. I thought perhaps I can raise a conversation about something some people might be curious about or opinionated on but don’t talk about.” 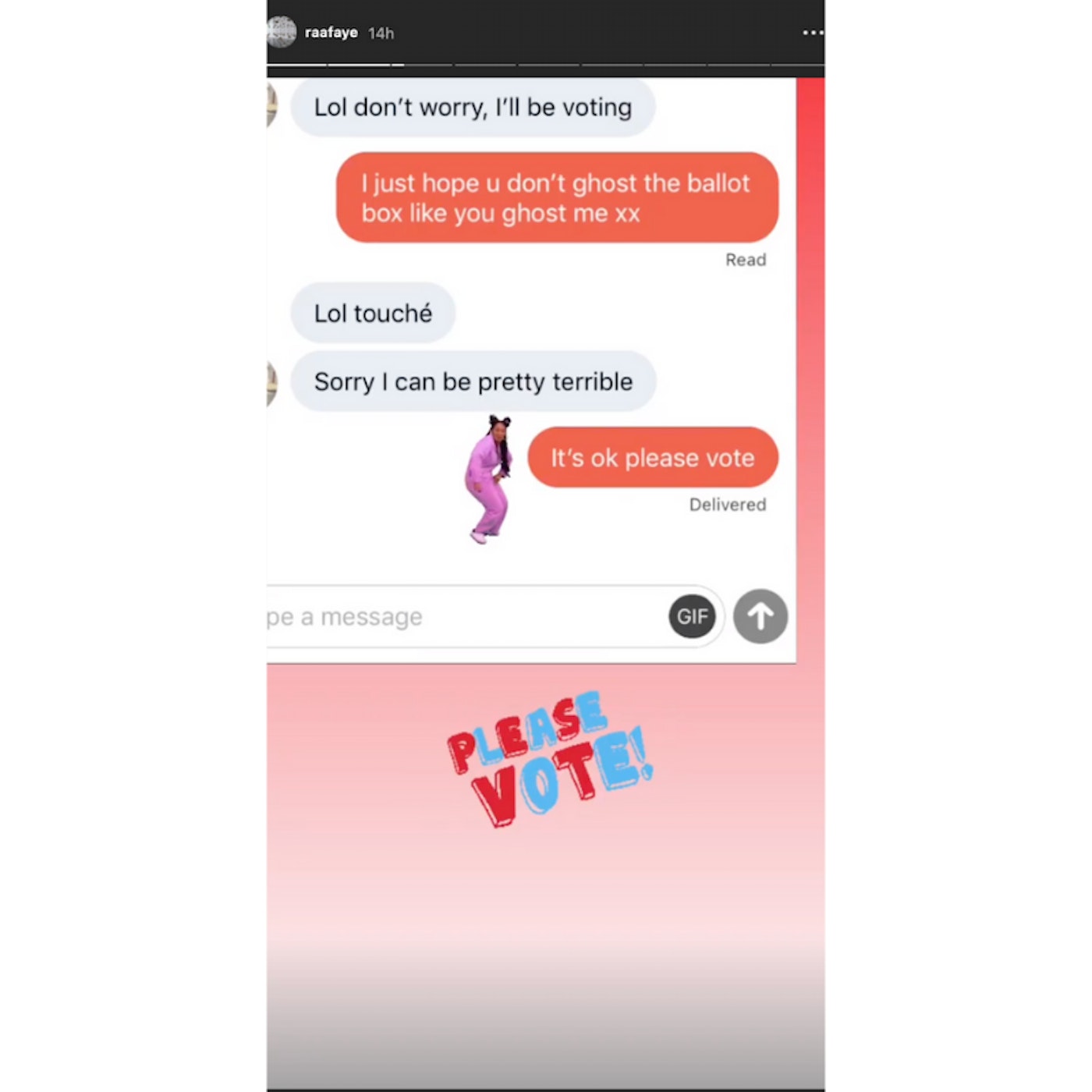 “There’s these rules of etiquettes when we should and shouldn’t talk about politics but it seems ridiculous considering the gravity of how influential it is on our reality, not only does it show what kind of person you are but it gives us insights about what’s important to us. For the ones who say they aren’t political I just try make it as relatable as possible, show how it fundamentally shapes so many aspects of their life to hopefully make them reconsider how they do have opinions and those opinions are worthy. I do a lot of editorial illustration which is about explaining something through a visual image to make it ready to talk about, terminology and jargon really switches people off so it’s so important to make sure it’s accessible and why not on a dating app where you naturally more likely to talk to some one rather then a stranger on the tube,” says Ali. 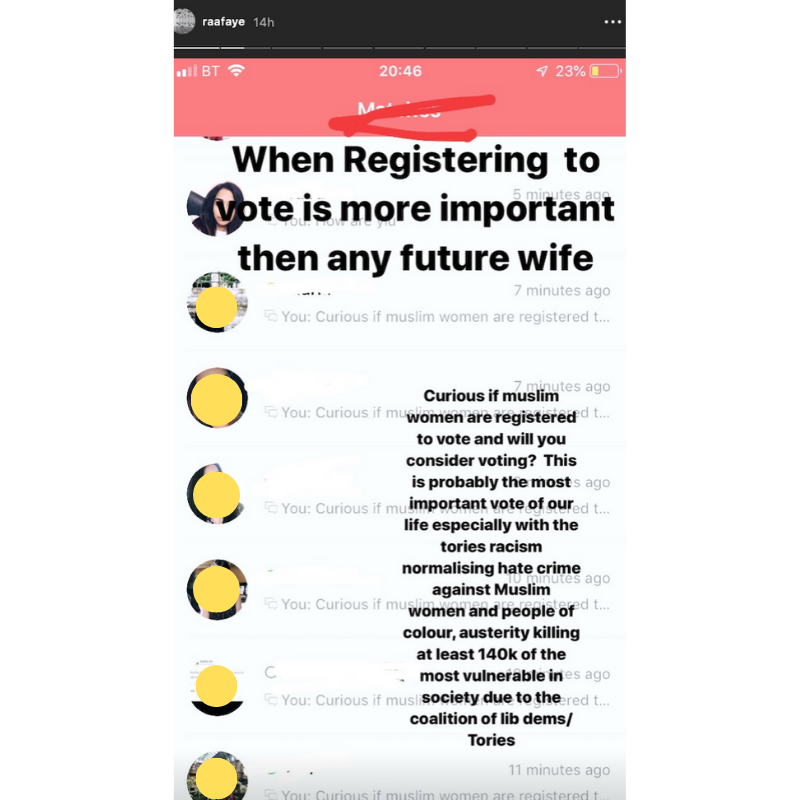 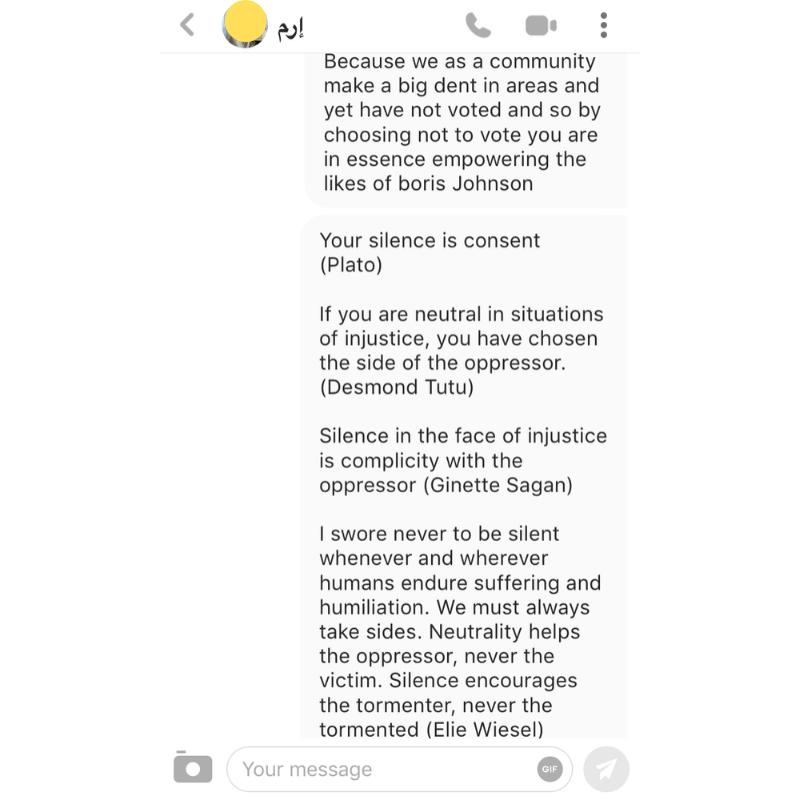 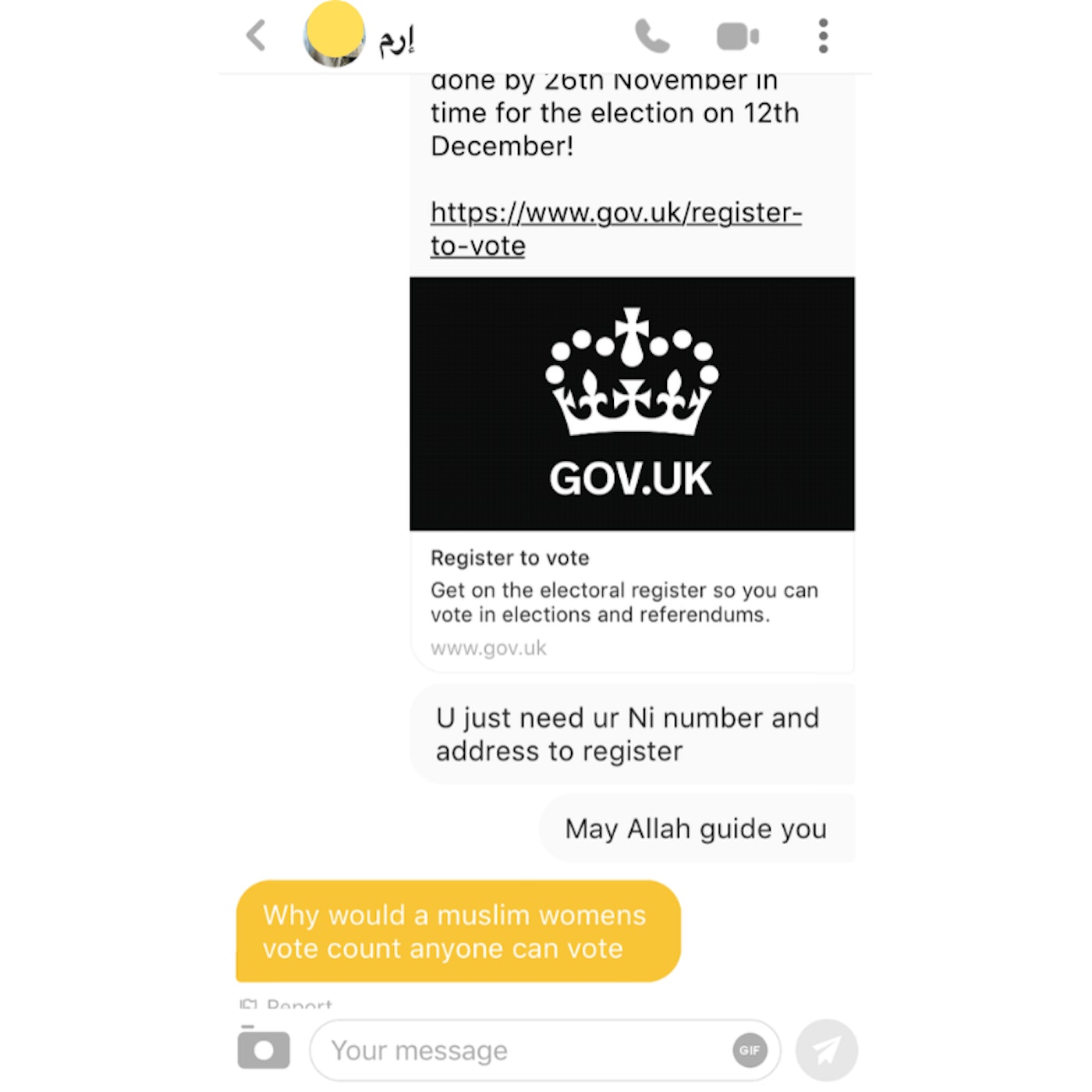 Ali says, “We were born in a hospital, our elderly are taken care of in hospital, we had student finance for university, we had social housing so weren’t living in the street, we had benefits so that our families could afford to feed us and clothe us. We get paid when we are sick and we have holiday pay at work, we have a minimum wage and employment laws, we have infrastructure in all our homes to have gas electricity clean water, These are all human elements that are so political and yet many may not realise how.”