9 Ways to Make the Most of Dhul Hijjah 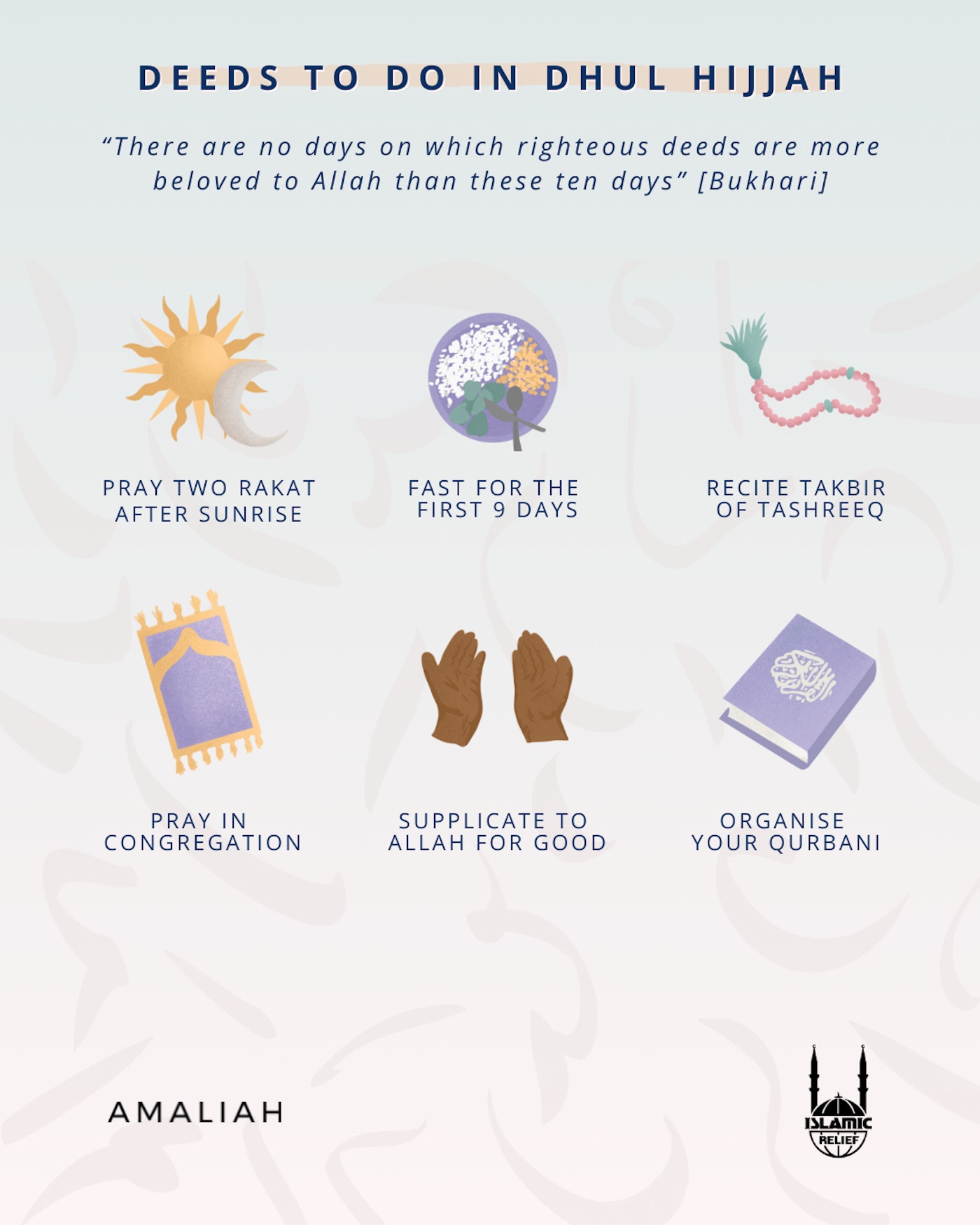 This article is sponsored by Islamic Relief UK. You can find out more about their work here.

If you were to ask anyone to name a sacred month in Islam, their immediate response would probably be ‘Ramadan.’ Each month in the Islamic calendar has its own virtue and the sacred months typically refer to seasons of warfare, or prominent events at the time of the Prophet (PBUH). For instance, Dhul Qa’adah – the month to sit – refers to sitting back or not fighting, Muharram means forbidden where fighting is prohibited, and the month of Rajab, which means to remove and refrain (referring to weapons). Dhul Hijjah is the last of the 12 months of the Islamic calendar. It is the month where millions of Muslims around the world gather to perform Hajj. This pillar of our faith may be one of the strongest references to the month that we know. Not many of us are able to go on Hajj, but that does not mean that we cannot take actions to commemorate and observe the month from home, and to reap its many rewards.

The month of Dhul Hijjah is one of the holiest periods of the Islamic year. A month of increased spirituality, we witness two very special occasions within the same month (Hajj and Eid ul Adha) – all in devotion to Allah (SWT).

Many people don’t know that the first ten days of Dhul Hijjah are better than all the other days of the year.

Prophet Muhammad (ﷺ) said: “There are no days on which righteous deeds are more beloved to Allah than these ten days [meaning the (first) ten days of Dhul-Hijjah].” [Bukhari]

The fact that these months are placed together means that even if you feel like you haven’t unlocked your full potential or achieved all your spiritual goals during Ramadan, you still have Dhul Hijjah to strive for. It is as though Allah, in His infinite wisdom, placed these months together so that we do not despair. These beloved ten days offer another chance to gain immense rewards, have our sins forgiven and reach great levels of piety, Insha’Allah.

In this spirit, we’ve partnered up with Islamic Relief UK* to bring you this handy guide of 9 ways you can make the most of the sacred days: 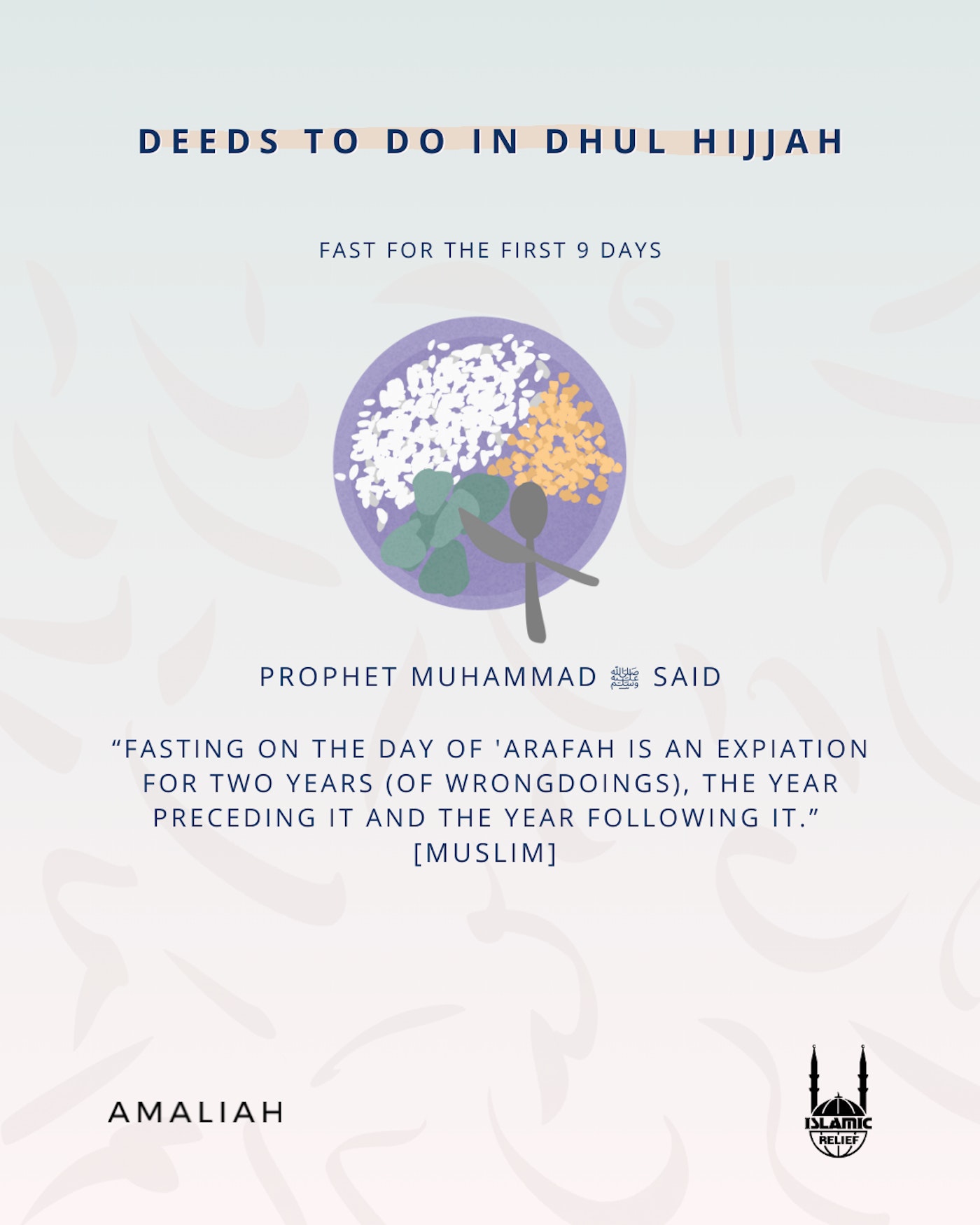 From Allah’s boundless generosity, comes another opportunity after Ramadan, to have our sins wiped away by fasting on the day of ‘Arafah, the ninth day of the month.

Prophet Muhammad (ﷺ) said: “Fasting on the day of ‘Arafah is an expiation for two years (of wrongdoings), the year preceding it and the year following it.” [Muslim]

This is our chance, with the additional ten days Allah has gifted us, to draw closer to Him once again and make the most of the ample opportunities He has given us to please Him. Since good deeds are beloved to Allah during this time, we should make every effort to fast all of the nine days of Dhul Hijjah. If you miss out on fasting because of circumstances beyond your control (menstruation or illness, for example), you are still rewarded as if you had fasted. So accept the gift Allah has given you and focus on the other deeds you can do.

2. Hold on to your obligations

During the first ten days of Dhul Hijjah, all the pillars of Islam are combined in a way that doesn’t occur again for the rest of the year. From Hajj, reciting the Shahadah, prayer, fasting, to giving in charity – this is the only time of the year that we are able to fulfil all the pillars of Islam and the best way to begin to do this is by ensuring that we are fulfilling the obligatory acts of worship before embarking on voluntary good deeds.

The Prophet Muhammad (ﷺ) said: “Allah said: ‘… the most beloved things with which My slave comes nearer to Me, is what I have made compulsory upon him.’” [Bukhari] 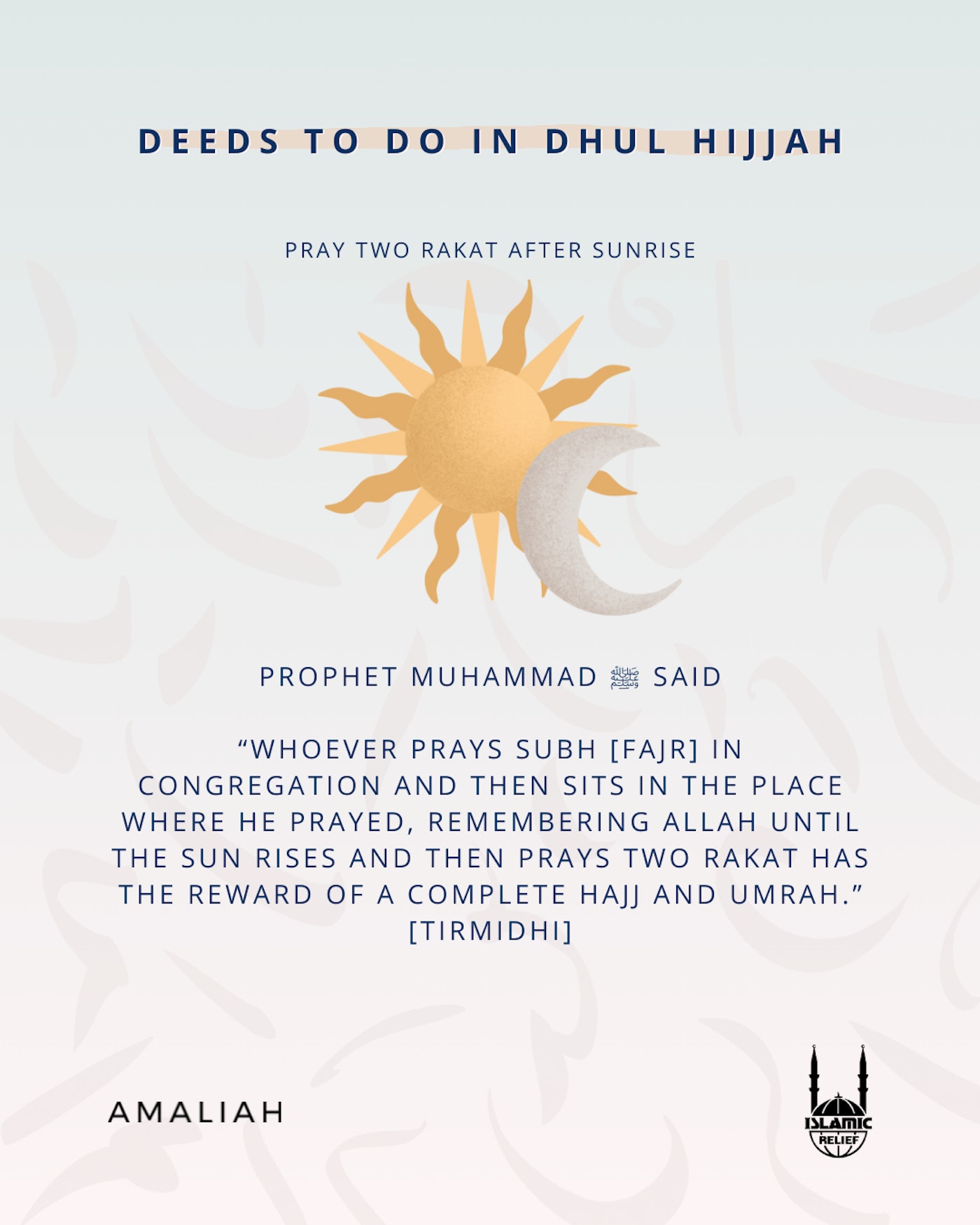 The first ten days of Dhul Hijjah are often referred to as the best ten days of the year. It is another opportunity gifted to us by Allah to turn back to him and have our sins wiped away. For those of us not performing Hajj this year, this is still a great time of blessing and immense reward.

Although the majority of us will not be able to perform Hajj this year, and many will have saved up to do Hajj but have had their plans delayed for two years due to COVID-19 restrictions, Allah’s mercy and generosity allows us to still earn rewards similar to those granted during a completed Hajj. Make these a priority and don’t miss out:

Prophet Muhammad (ﷺ) said: “Whoever prays Subh (Fajr) in congregation and then sits in the place where he prayed, remembering Allah until the sun rises and then prays two rakat has the reward of a complete Hajj and Umrah.” He repeated “complete” three times. [Tirmidhi] 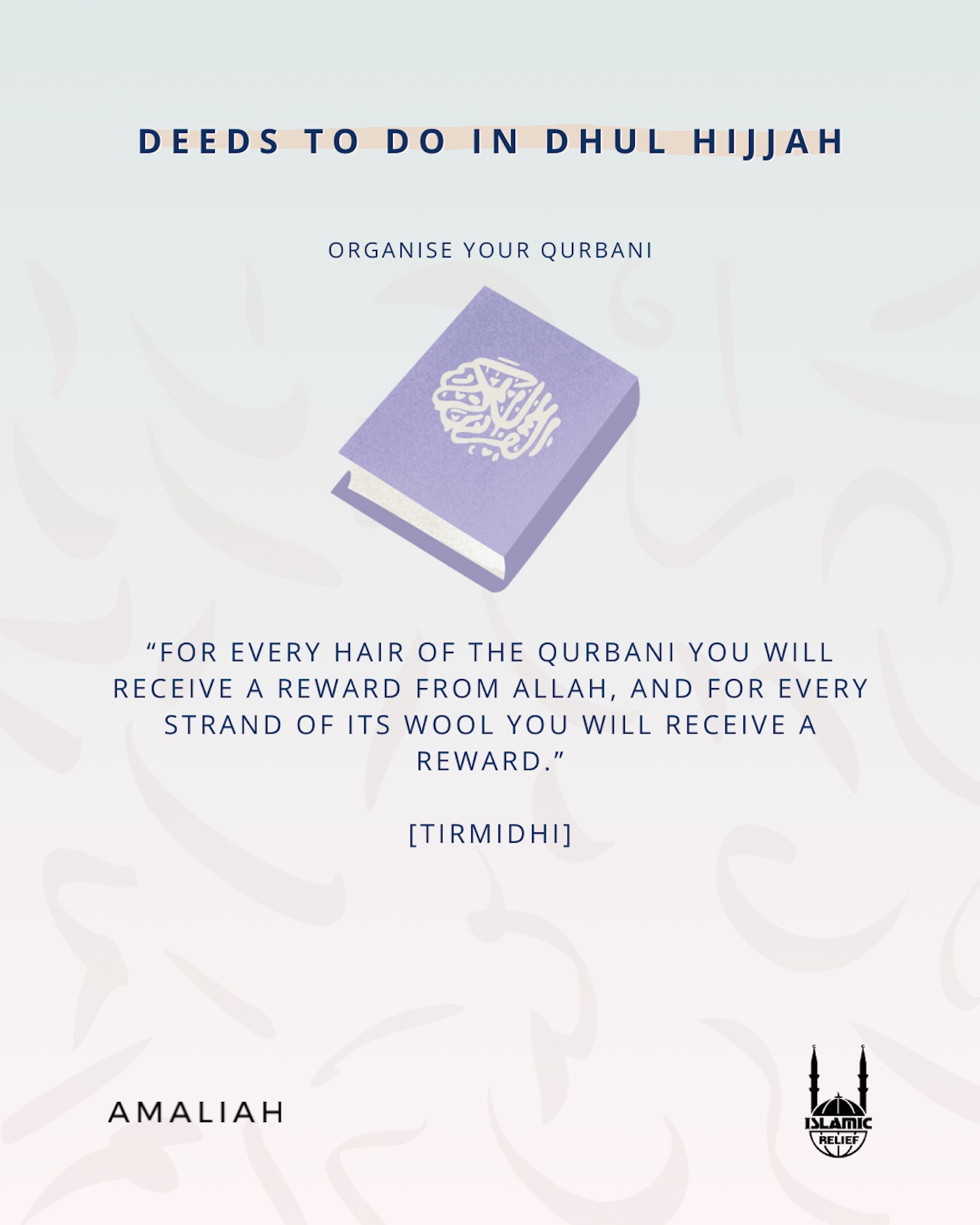 The sacrifice offered on the day of Eid ul Adha is a means of honouring Allah and getting closer to Him. We are able to include our wider community in this sacrifice by offering our Qurbani/Udhiyah to those living in poverty and it may be the only meat they eat all year. Qurbani is obligatory on every Muslim that can afford it. It is best to organise and pay for your Qurbani/Udhiyah before Dhul Hijjah begins to ensure that the Qurbani can reach those who need it most in time.

Click here to organise your Qurbani and to find out more about the rules and obligations of this important sunnah.

Dhul Hijjah is the most sacred of the sacred months. Allah multiplies our rewards for good deeds during this time, which is why we should be even more mindful of sinning or acts that deprive us of Allah’s blessings as those too are magnified during this time. Any good deeds done in these ten days surpass good deeds done on any other day of the year. Think of the good deeds you normally do throughout the year, and try to do more of them for the extra rewards!

The Prophet Muhammad ﷺ said, ‘There are no days in which righteous deeds are more beloved to Allah than in these (ten) days’. [Abu Dawud]

30 Deeds for 30 Days of Ramadan and Beyond 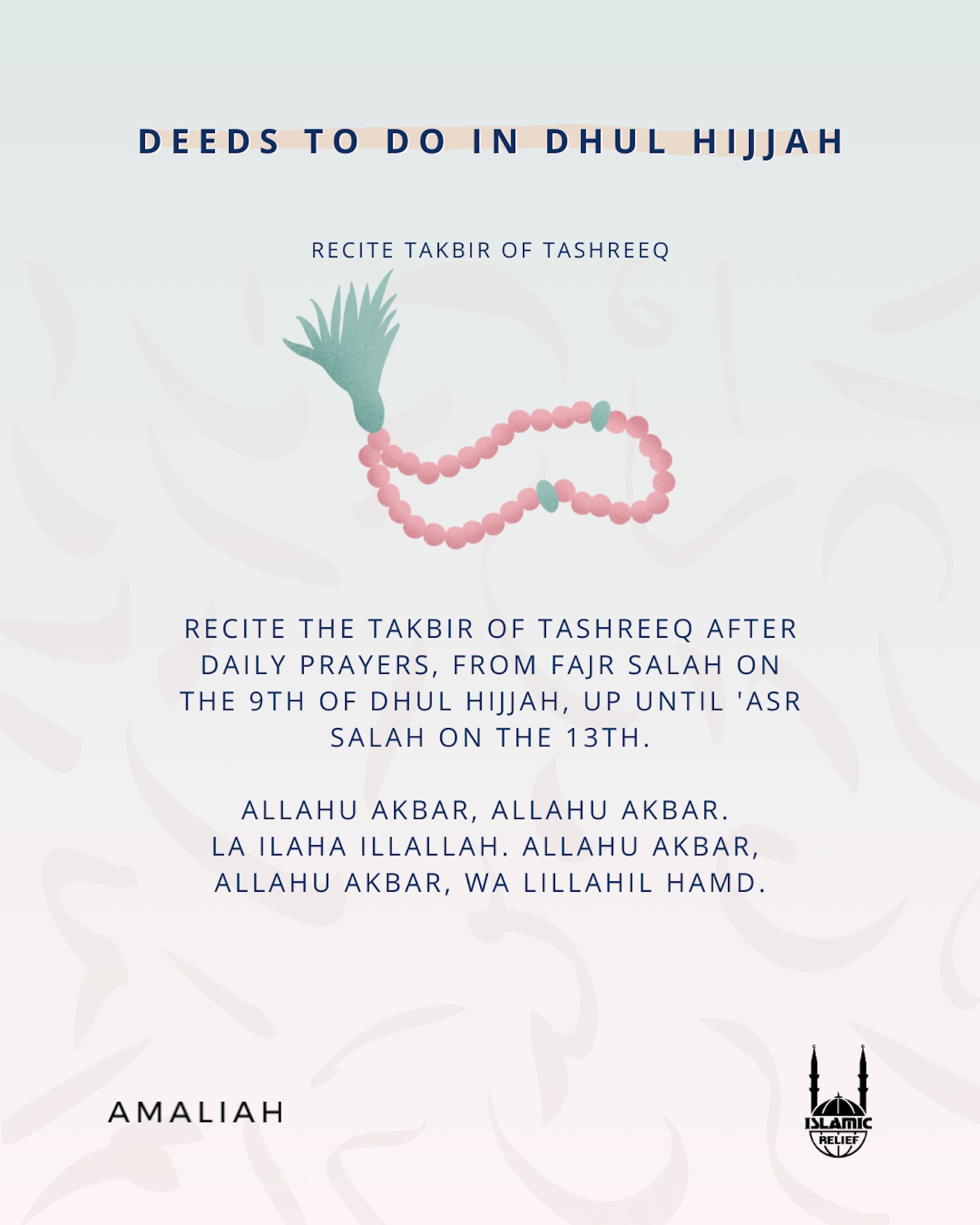 Keep your tongue moist with the remembrance of Allah throughout these ten days by reciting the Tasbeeh, Tahmeed, Tahleel and Takbeer constantly. Build this beautiful sunnah into a habit by reciting ‘SubhanAllah, Alhamdullilah, La ilaha illa Allah, Allahu Akbar’ wherever you are!

Ibn Masud narrated that: ThenProphet Muhammad ﷺ said: “I met Ibrahim on the night of my ascent, so he said: ‘O Muhammad, recite Salam from me to your nation, and inform them that Paradise has pure soil and delicious water, and that it is a flat treeless plain, and that its seeds are: “Glory is to Allah (Subhan Allah) [and] all praise is due to Allah (Alhamdullilah) and ‘none has the right to be worshipped but Allah’ (La ilaha illa Allah), and Allah is the greatest (Allahu Akbar).” [Tirmidhi] 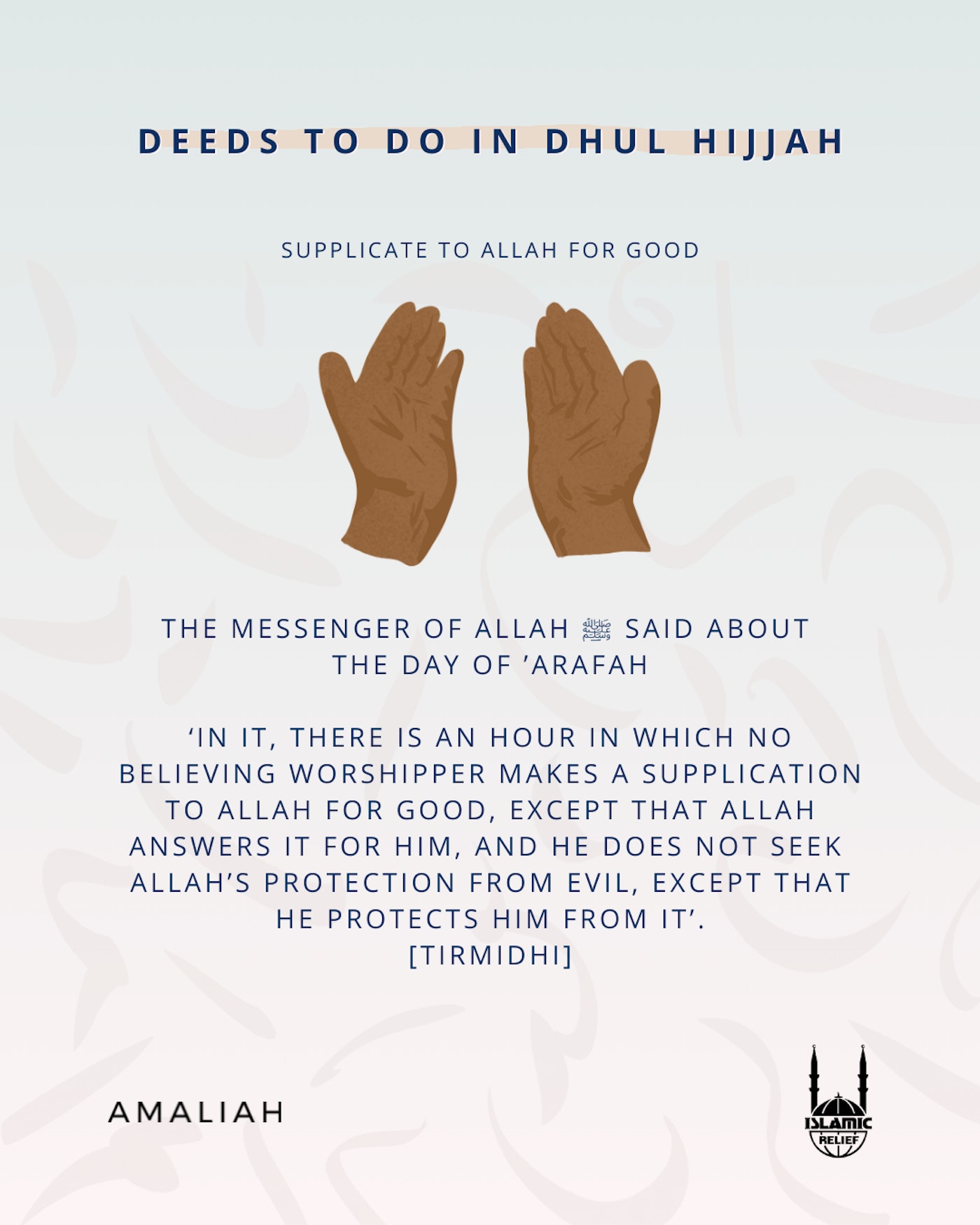 The ten days of Dhul Hijjah and in particular, the day of ‘Arafah, are a time to call on Allah, to beg for His forgiveness, to ask for His mercy and to thank Him for the blessings He has bestowed upon us.

What did the Prophet Muhammad ﷺ  say about the day of ’Arafah?

“In it, there is an hour in which no believing worshipper makes a supplication to Allah for good, except that Allah answers it for him, and he does not seek Allah’s protection from evil, except that He protects him from it”.  [Tirmidhi]

Raise your hands and call on Him in any language, at any time. Pray for yourself first and foremost, pray for your family and friends and pray for the entire ummah. In particular, pray for those that are oppressed around the world and ask Allah to make them victorious in their struggle.

8. Learn from the Sacrifices and Steadfastness of Hajar

Dhul Hijjah is an opportunity to reflect on the lessons from the amazing story of Hajar.

When Ibrahim left his wife Hajar and son Isma’il in the middle of the desert, she asked him whether Allah had asked him to do it. When he said, ‘Yes,’ she responded with, “In that case, Allah will never abandon us.” She did not waver in her faith, and knew with full certainty – even as she ran between the hills of Safa and Marwa, looking for sustenance for Isma’il, that Allah would not abandon her. Today millions of pilgrims replicate her actions by running between the hills of Safa and Marwa to commemorate her strength and her complete reliance on Allah, and drink from the water of Zamzam that Allah rewarded her with and that we still drink from today.

9. Reflect and ask Allah to allow you to witness Dhul Hijjah next year

Prophet Muhammad’s (ﷺ) last sermon, otherwise known as the Khutbatul Wadaa (the Farewell Sermon), was delivered on Friday the 9th of Dhu al-Hijjah at Mount Arafah during the final and only Hajj that the Prophet ever embarked on in the last few months of his life. In it, he reminded us to not hurt one another, to avoid riba (interest), to treat women well and uphold their rights, that we are all equal in the eyes of Allah, and that racism has no place in Islam, and to seek refuge in Allah from the devil. It is beautifully all-encompassing, to be followed by us for years to come inshaAllah.

“Today I have completed your religion for you, perfected My favour upon you, and have chosen Islam as your religion.” (Qur’an 5:3)

You can also take the opportunity to listen to the sermon from Mecca on the day of Arafat, it is available via multiple platforms online.

Celebrate Eid ul Adha by rejoicing in Allah’s mercy and bounty. Alhamdullilah for all the goodness that He provides for us and the blessing of Islam. May our worship and good deeds this Dhul Hijjah earn the pleasure of Allah.