Muna Knows It All: The One Woman Play 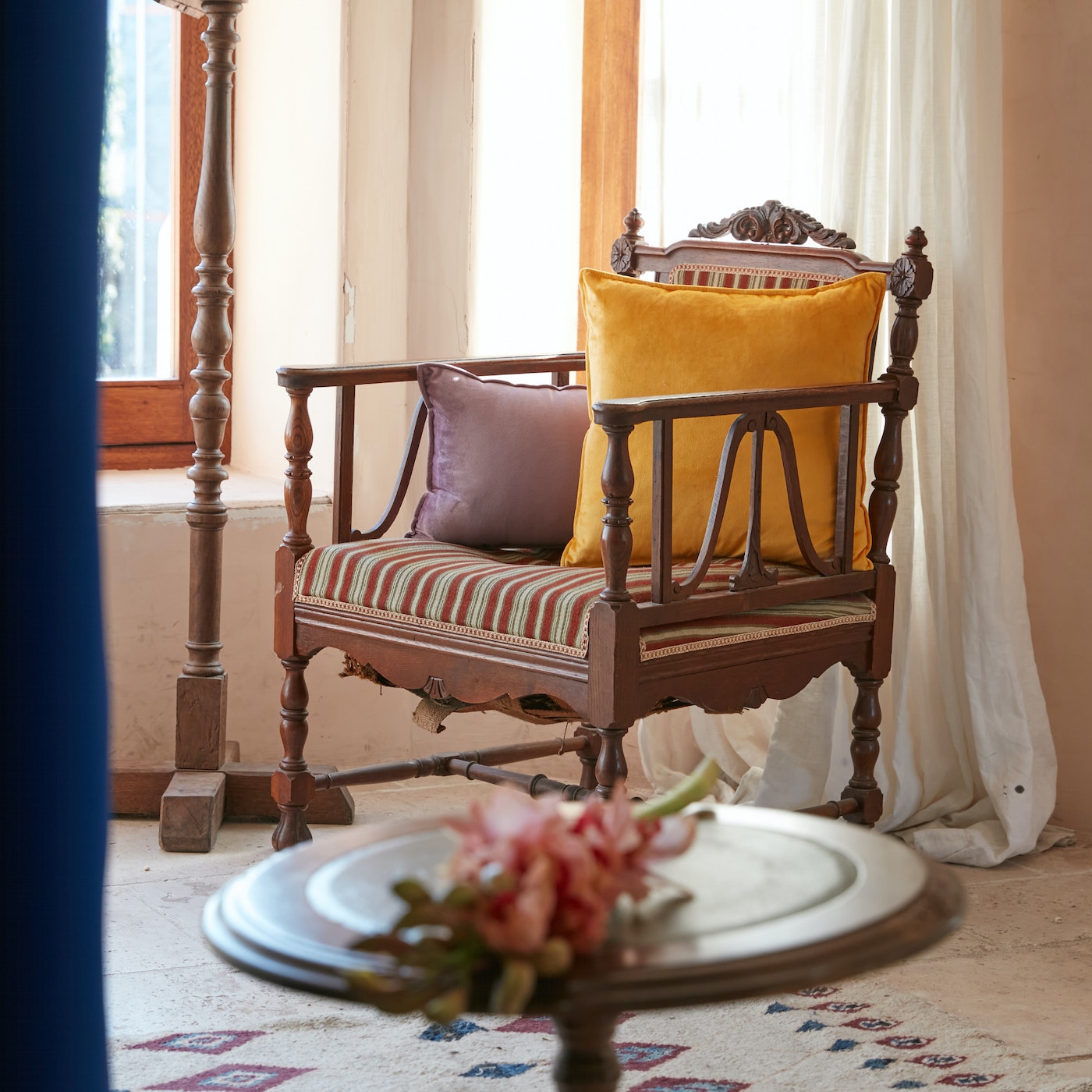 Following the sold out productions of Home (2019) and Arawelo (2019), Muna Knows It All was presented at rich mix and performed in front of two sold out audiences on Thursday 28th October and Saturday 30th October. As part of the UK’s Black history month, Kayd Somali Arts and Culture presented the 13th annual Somali week festival. This year’s festival was titled “Inspire: inspired by the past, inspiring the future” which foresees a post covid world and sheds a creative spotlight on writers, poets, musicians, and activists.

Written and performed by Sabrina Ali, Muna Knows It All is a one woman play that explores the aftermath of a wedding day disaster that left Haleema’s wedding dress destroyed. Muna, played by Sabrina Ali, is a criminology graduate and aspiring private investigator who is convinced that she knows it all. Throughout the play she takes it upon herself to figure out the deviant behind Haleema’s ruined big day by investigating Haleema’s bridesmaids and best friends named Hani, Ismahan and Safia. Muna takes the audience with her through her investigation by introducing the best friends through a powerpoint that was hilariously created by her to display her character’s amateurism, and she dissects a theory behind why each friend is responsible for the incident. The play was pure entertainment and follows the rules of the satire comedy genre and Muna’s mannerisms were reminiscent of our favourite mockumentary shows such as The Office. 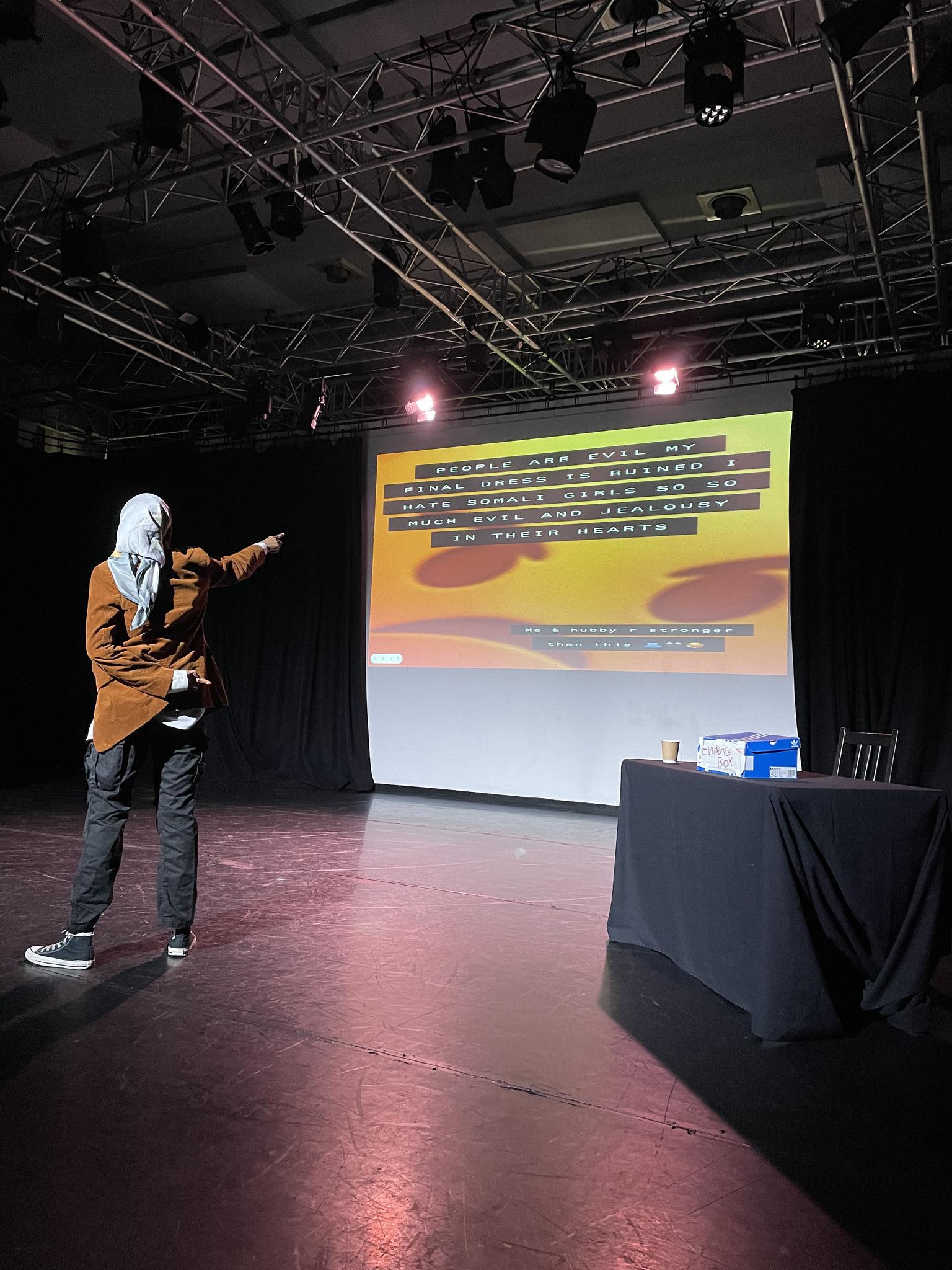 Whilst the play was nothing short of Brilliance because of Sabrina Ali’s performance, other significant aspects were the attention to detail through the powerpoint presentation, the weak photoshop skills in pictures and dms, the short videos by other girls describing each friend and lastly- the music after every introduction. As each best friend was introduced, there was a song to commemorate their character and a prop to signify their importance in the play.

The one woman play signalled Sabrina to switch to each character and essentially have a conversation with herself. Each character was distinct and exaggerated as Sabrina described later on that the character Muna is how she would be as a private investigator, and each of the best friends were created with the help of her real-life friends but exaggerated to give it that dead-pan comedy feel. Tapping into different roles doesn’t look easy but Sabrina made it seem effortless. The audience burst into laughs as each character’s arc was introduced and explored through the confrontation scenes. 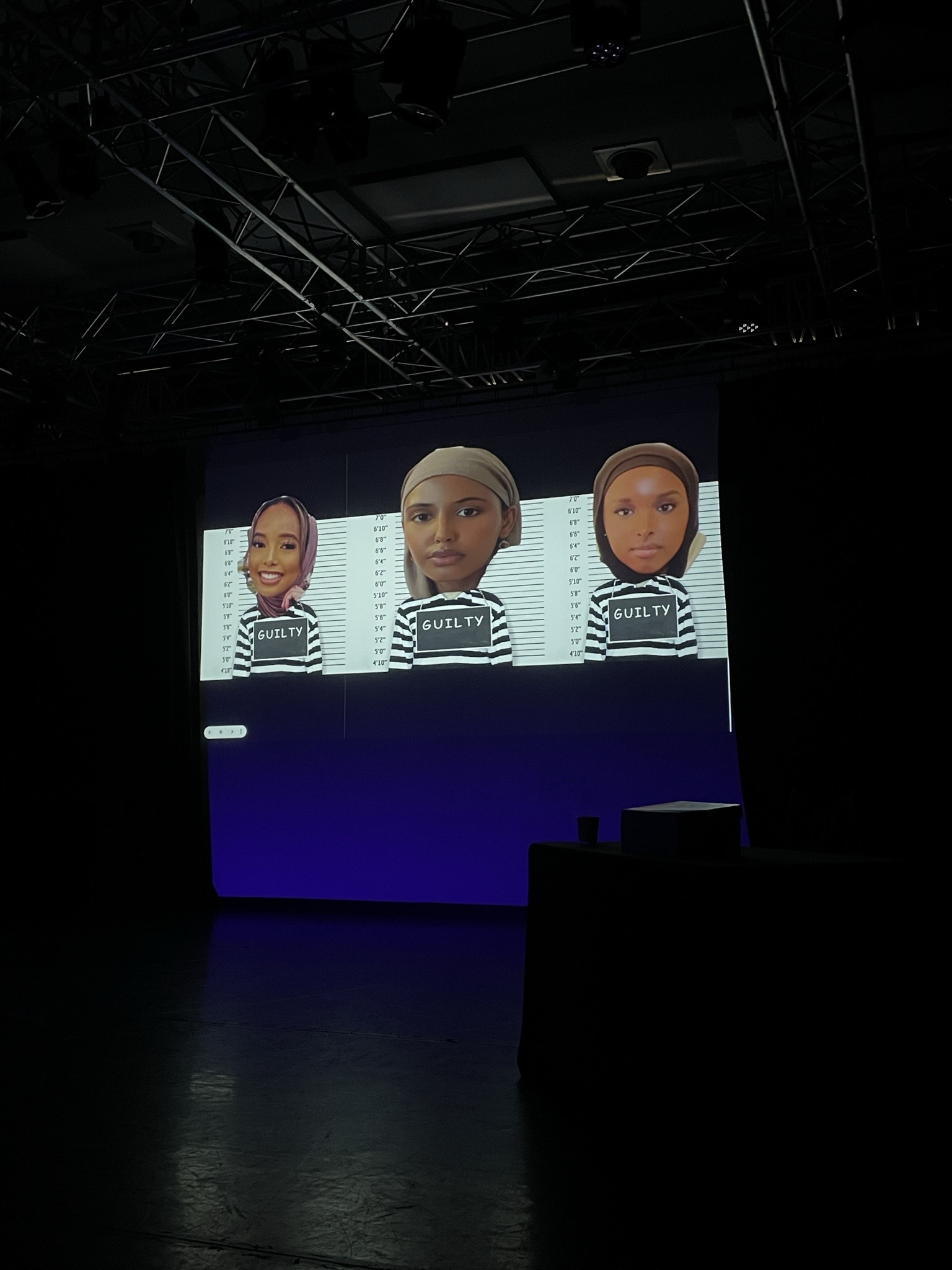 The suspects: Bridesmaids and best friends

The night ended with a post Q&A with Sabrina Ali and Side eYe productions’ producer and director duo Hannah Abdule and Poppy Clifford as they sat down to discuss the making of MUNA KNOWS IT ALL. Originally, Sabrina was writing for a short film project until producer Hannah messaged her and said they need a one woman play written up in two/three weeks. Sabrina’s knowledge of one woman plays was limited but a tip from her dear friend told her to invest herself in stand up comedies to really understand how to storytell a play, and interact with the audience all by yourself. Whilst the show was very much fast paced and engaging, it’s important for the readers and audience to know that Sabrina and the side eye productions’ team had only two weeks to get a script ready, and two/three days on in-person rehearsals. Poppy exclaimed that they are at the “developmental stage” of the project, and so I hope that we can see this play developed into something amazing that will bring in new audiences and hopefully inspire young people from marginalised communities to get involved with the creative industry.

A post shared by MUNA KNOWS IT ALL (@munaknowsitall)

Side eYe productions encourage young creatives from the Somali community to get involved with telling their own stories. Sabrina Ali is an example of a creative that is eager to tell nuanced stories to entertain audiences without having any previous background experience of being in the film industry. So salute to Side-Eye productions for involving young people who are not professionally trained but interested with the film industry to tell their own stories. Hannah Abdule and Poppy Clifford set an example of giving those young people a platform to share their gifts on stage, so I’m excited to see what new stories they will tell next in the new year to come.

From the stage set to the soundtrack, it was a joyous night that ended with a standing ovation. The crowd applauded Sabrina Ali for her ability to strike a brilliant performance and write an impeccable piece. This is the beginning, and I hope we can see more from Sabrina and Side eYe productions in the future. 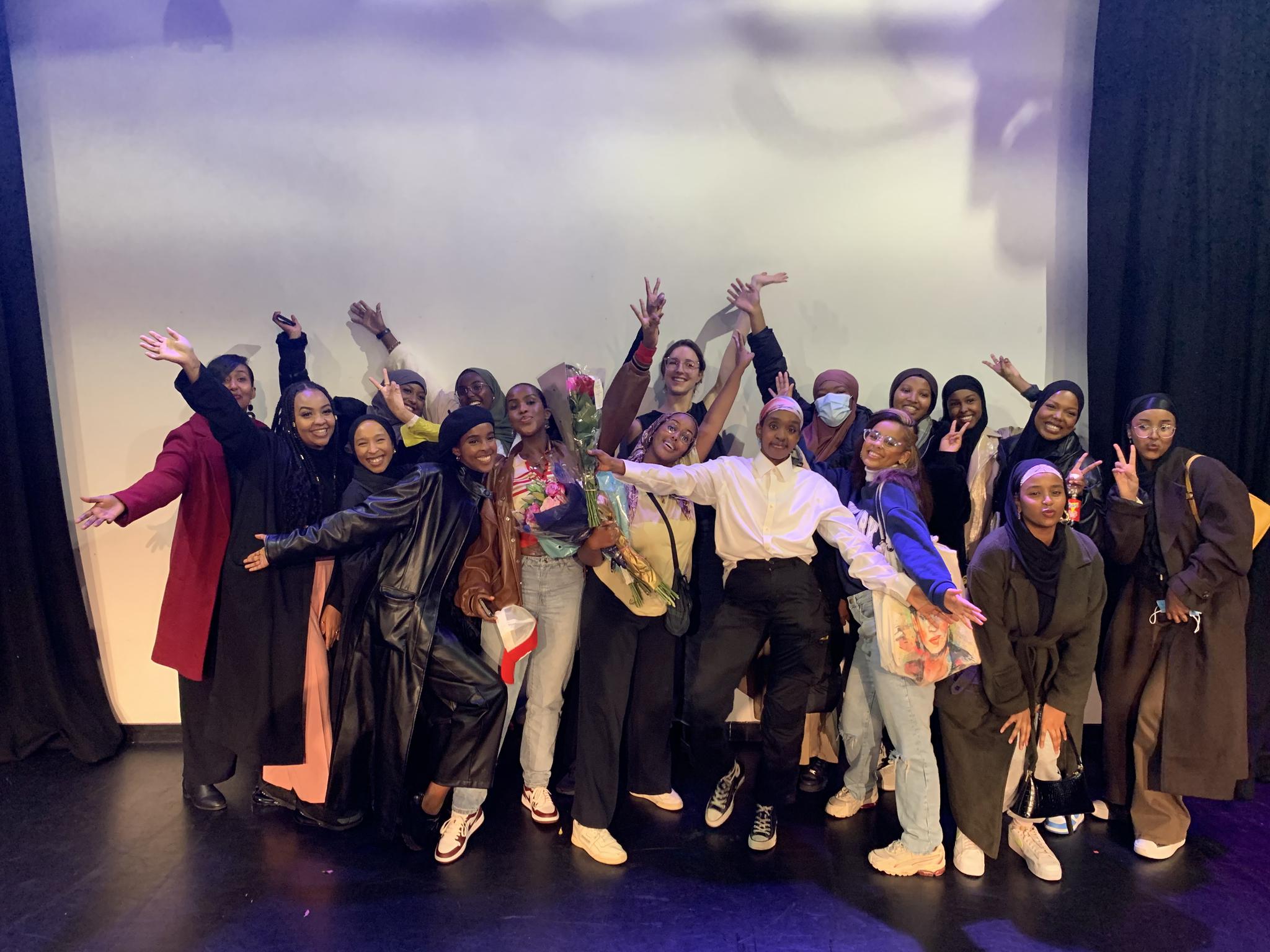 My name is Asiya and I study journalism. I love writing about things that excite me and my taste has no limits. As a black muslim I'm searching for my black muslim writers to follow as in the field of journalism we are limited. Women empowerment is very important to me, especially as a muslim as I think its a must that we set the path for the next generation. That means Inspiring girls that look like us and inshallah taking the role of creatives. IG: @blogbyasiya

4 Ways to Level up Your Finances