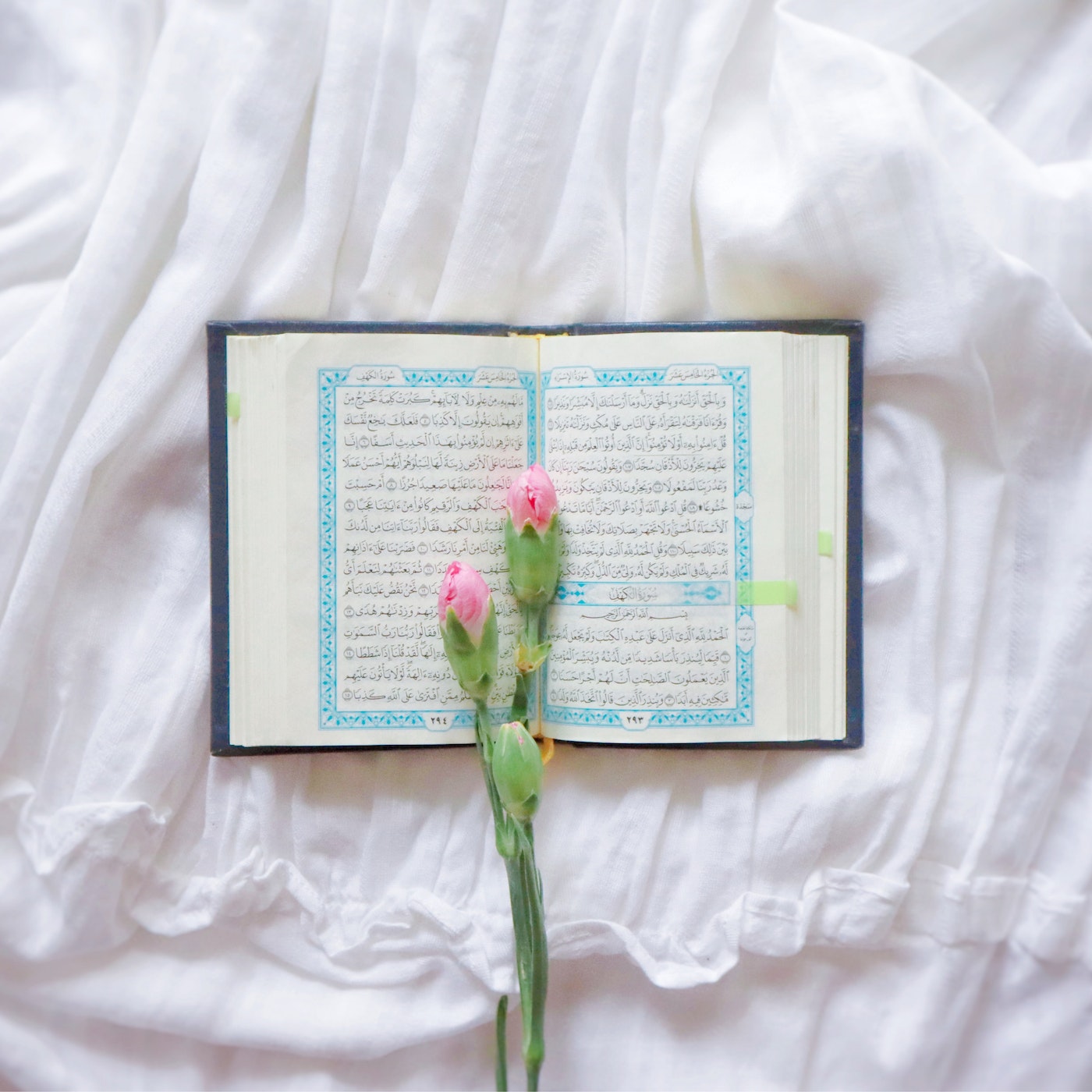 For some of us, our earliest memories of the Qur’an are images of our mothers or grandmothers rocking back and forth reciting from their well-loved copies of the Qur’an that rested on ornate stands. For others, we associate the Qur’an with our evening teachers, stern and kind in turn, breathing through our struggles and giggles, encouraging us to finish a page or half of it at least. For some of us, our relationship with the Qur’an began in adulthood, listening to an ayah, scribbling down a transliteration and reciting it over and over until we were ready to try it out in our next salah. Our earliest association with the Qur’an was most likely in the voice of a woman – a mother, a mother-figure, a teacher or even our own selves.

This Ramadan 2022, we go back to that beginning and honor the voices of women reciting the Qur’an by adding more female reciters to our playlists. We honor the legacy of women learning and teaching the sacred words of Allah and pray that our listening and learning from these recordings is accepted as Sadaqah Jariyah for them.

This Ramadan, as we commit to strengthening our relationship with the Qur’an, we also renew our intentions to bring back age-old Islamic traditions of truly honoring our female scholars and celebrating unapologetic female voices reciting the Qur’an.

May these female scholars and reciters of the Qur’an lighten up your days and your playlists and may they inspire us to come closer to the Qur’an.

In sixties Indonesia, Maria Ulfa started her training in Qur’an at age six. Her father taught her from an early age that her Qur’anic education was as important as that of any man. He staged Qur’an competitions in their hometown to immerse his daughters in that experience and Maria Ulfa grew up winning several competitions. She is now one of the world’s most renowned Qari’ah and a lecturer at the Institute for the Study of Qur’an and at the National Islamic University in Indonesia.

Samia Mubarak is a student of the Qur’an, founder and teacher at Qur’anic Ocean and an avid advocate for special needs. Samia’s recitations and reflections have drawn in women from all over the world who can join her deep dive courses that include specific surahs such as Surah Yusuf or transformational classes such as her course on Successful Parenting from the Qur’anic Perspective.

Madinah Javed is a Scottish trainee lawyer, an activist, a women’s rights campaigner and a Qari’ah. She launched the #FemaleReciters campaign to elevate women’s voices in lslam and raise awareness of women reciting the Qur’an in the public sphere. She has recited all over the world including the British Museum and the Scottish Parliament. You can follow her journey on Instagram and Twitter @madinahjaved.

A’tii Qah’s journey with the Qur’an started when she was just 7 years old. Since then, she has participated in various local and international Qur’an recitation competitions and obtained a degree in Islam Theology from Al-Azhar University in Egypt. She is now a calligrapher and works as a Maqamat trainer at the School of Tarannum.

Imane Ezouatni is a Qari’ah from Morocco. In 2016, she represented her country in the Sheikha Fatima Bint Mubarak International Holy Qur’an Competition and won the award for Most Beautiful Recitation.

Maryam Amir holds a bachelor’s in Islamic Studies from Al-Azhar University and a master’s in Education from UCLA. Her #FOREMOTHERS campaign focuses on reciting like the female companions of the Prophet (s). Anyone can participate by sharing their recitations on Maryam Amir’s social media platforms. She is also the creator of the Qariah app which includes recitations from women all over the world. The app launches Ramadan 2022 inshaAllah!

At the age of 13, Nusaiba won the National Qiraat Competition and became the first female reciter to ever do so. Since then, she has been teaching the Qur’an to both men and women. She went on to study Fashion Textiles and Design and founded WAW Creative Arts – an art school with it’s syllabus rooted in Islamic history and values.  She was also featured as one of the 100 most influential Muslims in the UK by Emerald Network.

Sumayah Hassan is the founder of Recite & Reflect, author of 50 Reflections on the Qur’an and co-host of Honest Tea Talk. She runs the Sincerely, Sumayah podcast and her workshops have helped over 300 women deepen their connection with the Qur’an.

Farah Elbekkali is a Qari’ah from Morocco who memorized the entire Qur’an at the age of 11. She went on to participate in many national and international competitions including the Sheikha Fatima Bint Mubarak International Holy Qur’an Competition. You can find more of her recordings on Instagram and YouTube.

Jee Inshera completed her memorization of the Qur’an in 2019 at a very young age. She has won several National Tarteel Competitions in Indonesia. You can find both Qur’an recitation and anasheed on her YouTube channel.

Dr. Amatullah Saafir is an Attending Anesthesiologist in New Jersey. She learned Tajweed as a young teen, completed her memorization of the Qur’an in Senegal, West Africa at the age of 16 and also obtained an Ijaza in Warsh recitation. She continues to learn and teach the Qur’an.

Anse Hafsa Abdul-Hakeem works in social services and has studied under scholars in Yemen, Jordan and Egypt. She holds certifications in Tajweed and currently studies and teaches with Rabata.

Anse Nishat Lal began studying Arabic at age 14, went on to receive her bachelor’s in Arabic and History from the University of London and her master’s in Arabic Translation form the School of Oriental and African Studies. She earned her Ijaza in Tajweed from Syria and studied at the University of Damascus for a year. She is now an Arabic and Tajweed teacher at Ribaat Academic Institute.

Aaminah Hendricks memorized the Qur’an from JEQ. She has participated in many Qur’an competitions. She represented South Africa in the Sheikha Fatima Bint Mubarak Competition and achieved third position. Aaminah is currently studying at Al Tanzil Institute of Qur’anic Science.

Halima Nalo Afi is a midwife from California. She has received her Ijazah in Tajweed in Hafs recitation and has taught the Qur’an since 2009 with different organisations including The Rahmah Foundation and Measured Tones Institute of Qur’an.

Made up of Sakinah Lenoir and Rabiah Mali, Pearls of Islam share songs of praise, words of devotion and sounds of love. They had also founded and led initiatives under The Rabbani Project such as Ladies of Light, which organizes events for Muslim women such as Qur’an healing circles and retreats.

Hajar Boussak began studying the Qur’an in Morocco at the age of eight. She has participated and won many competitions including first prize in the International Qur’an Recital Assembly in Malaysia where she received an award from the Queen of Malaysia.

Zahraa Helmy has represented Egypt and won several Qur’an competitions worldwide. She has also recited at the conference of the Organisation of Islamic Cooperation and is the first woman to ever do so.

Khaoula Darkaoui is a Moroccan YouTuber and reciter of the Qur’an. She started reciting on YouTube soon after she joined university. You can find her on Instagram @khaoula.darkaoui.

Nurenisa Reichling traveled to many countries including Syria and Lebanon to learn Arabic. She graduated in Translation Studies and Economics from the University of Graz, Austria and received her Tajweed Ijazah. She has curated a playlist of early recordings of female reciters of the Qur’an on her YouTube.

In 1920s Egypt, Sheikha Munira Abdou started her journey as a Qari’ah at the age of 18. At the time, only blind or female reciters were allowed to recite at funerals which lasted a total of six days. Sheikha Munira was both. She rose in popularity following her private recitations and became the first female reciter on Egyptian radio. She was nominated for numerous awards and was also one of the last women on Egyptian radio as a fatwa was issued soon after wrongfully declaring women’s voices as awrah.

The fatwa had detrimental effects on women as female reciters started to be frowned upon. Women now had to re-evaluate their relationships with the Qur’an and many reciters such as Sheikha Sekina Hasan took to singing, adopting a career more acceptable to society than the recitation of the Qur’an. Some rare recordings of Sheikha Sekina Hasan are still available.

Listen to rare recording we found on Soundcloud

A must listen on this mid-#Ramadan Mother's Day:

Thank you @SSWmastering for making this an even more beautiful listening experience. Please keep Br. Derrick in your 🤲🏻#HappyMothersDay #MuslimWomen pic.twitter.com/YIlPVCCqhq

Listen to another recording

Sheikha Nabawaiyya also appeared on Egyptian radio around the same time as Sheikha Munira Abdou. She had a strong, resonant voice and would recite at weddings, funerals and religious occasions, most particularly in the Imam Hussein Mosque in Cairo. In his book “Heaven’s Tunes”, Mahmoud Al-Saadani notes that she may have been the last woman to recite the Qur’an in public gatherings before the fatwa was issued.

May Allah reward every reciter of the Qur’an and may He reward those who struggle to stay close to it even when it is difficult tenfold.  May the Qur’an be the springtime of our hearts, the light of our chests, the remover of our sadness and the pacifier of our worries. May Ramadan 2022 prove to be our most fruitful yet. Ameen!

Anousha Vakani is the author of Muslim Girl-Powered Books and editor at Auliya Women. Her first children's book, Najma, came out in 2019 and went on to win the Daybreak Press Book Awards for Best Illustrations. She has another children's book scheduled for publication in 2022 (InshaAllah!). She loves creating and curating content for, by and about Muslim women, ranting over cups of anything caffeinated and flipping conspiracy theories over in her mind. Currently, she is working on reading anything with positive, wholesome representation of Muslim life and has torn half her hair out in the process of writing her own novel. You can connect with her @mgpbooks and @anoushav.