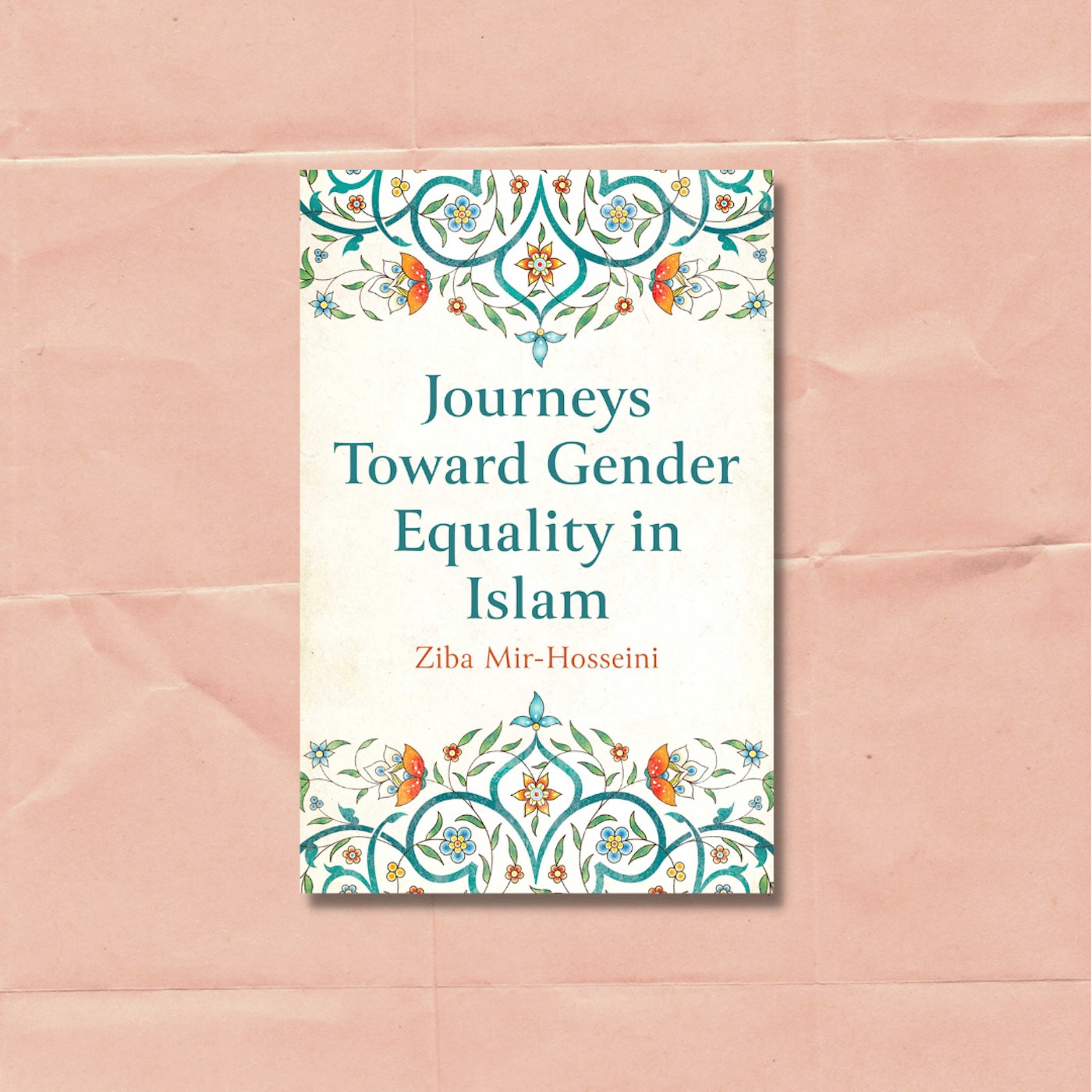 In Conversation With Ziba Mir-Hosseini and how “Journeys Towards Gender Equality in Islam” provides an easy-read into the complicated world of Islamic feminism.

For far too long conversations around the Hijab have been the focal point for conversations centering Muslim women in the media – not that it happens all that often. Still it’s usually incidents like the Hijab ban in Karnataka, India or discourse around the burqa in France that take up space in the media. Other than these incidents, Muslim women’s spaces within Islamic legalities or systems has long been ignored, or they’ve simply been regaled to the position of victimhood. But we are now no longer in an age where Muslim women are passively accepting the narratives forced down on them. On June 7 in Petaling Jaya Malaysia, a group of such women came together to celebrate the launch of anthropologist Ziba Mir-Hosseini’s latest book Journeys Toward Gender Equality in Islam. Mir Hosseini describes the often controversial term “Islamic feminism” as a movement that came about in reaction to political Islam’s return to Sharia movement which inspired gender activists to use Islamic critiques to push back against traditional Islamists.

In my own observances, the Islamic feminist movement has quickly grown to encompass Muslims who adhere to Islamic practices while also championing for the growth of a feminism that does not alienate their intersectional religious and cultural identity.  Speaking about the growth of Islamic feminism at the event, Mir Hosseini said, “The means to achieving our goal is as important as the goal itself.” She was accompanied by Sisters in Islam founder Zainah Anwar as well, and the two struck up an important conversation around public growth of Islamic feminist spaces and the need for impact on a policy level.

The book itself comes at a time when the branching out of multiple feminisms, and the increasing access to online spaces has put us in a time where everyone has their own ideal feminism  and – as i’ve often noticed in online discourse – find it hard to accept other people’s interpretations and approaches. It’s why the book struck me so poignantly because rather than putting out this supposed ideal of what is right, Mir-Hosseini explores different approaches and tackles disagreements between her and her interviewees in a constructive way.

From Abdullahi An Naim to Amina wadud and Asma Lamrabet, each interview acknowledges the different approaches that reformist thinkers can take towards Islamic feminism – a term that in itself is one that has had a long and often convulted history which Mir-Hosseini graciously acknowledges.

When I sat down with Mir-Hosseini, who is also the author of Islam and Gender: The Religious Debate in Contemporary Iran, Men in Charge? Rethinking Authority in Muslim Legal Tradition, and Islam and Democracy in Iran I was reminded very early on in our conversation of both how far the gender conversation in Islamic spaces has come, and how far we still need to go. It seemed my own observations on the lack of progressive and self-empowering narratives around women and Islam in the media matched Mir-Hosseini’s who pointed out that the idea for the book came to her in 2009 shortly after the launch of Musawah, an organisation she co-founded to build a community around exploring progressive Muslim family laws and structure within Islam.“For a long time, I wanted to make the work of reform thinkers available to activists and women.  We hear a lot about traditional Islam and what the previous generation of thinkers have said but not enough about new thinkers. I also wanted to engage them in a conversation about gender,” Mir-Hosseini shares.

When starting out with Journeys Towards Gender Equality in Islam I immediately found myself suddenly reading through many of the questions I had silently asked myself over the years.

How islamic and how feminist is Islamic feminism? Where can I learn more about resources that can actually help Muslim women? These were just some of the questions the book touched upon but what I truly liked was the emphasis it laid on asking questions as much as finding answers, because it meant I didn’t have to love or even agree with everything each person in the book said. It just means I had found a space where my explorations and queries were valid, something I’ve still rarely found in religious circles.

Unpacking Inaccessibility In Fiqh and Sharia Through Difficult Questions Structured as 6 chapters that feature interviews with 6 different thinkers, – each selected both because of Mir-Hosseini’s long existing personal and professional relationships with them, which is what led to conversations on equal footing, as well as the work they do on academic and activist lines. Moroccan doctor Asma Lamrabet, who is one of the interviewees has long been known for her transformative approach to both Islam and feminism in bringing the two together and for championing the need for Muslim women to fight for their own feminist approach, through her activism and the work of her think tank. On the other end of the spectrum is Sedigheh Vasmaghi, another interviewee who’s taken a much more radical approach to her activism as perhaps compared to Lamrabet and was forced to flee Iran due to her participation in the country’s reform movement as a lawyer, poet and women’s rights activist. Journeys Towards Gender Equality and Islam doesn’t care much for propriety or toeing the line – which is perhaps just what we need at a time when Muslim women are demanding radical change. I describe it as such because I was pleasantly surprised to see that Mir-Hosseini doesn’t shy away from asking difficult questions or acknowledging the tough path that the movement for gender justice in Islam has often had to take.

While I did feel like the book holistically could have benefited from thinkers from more diverse viewpoints in order to really present some different sides to the argument, I loved how each interviewees own work was placed front and center in their interview, allowing me as a reader to get a good understanding of where their journey took them. It helped me relate to these thinkers in a way I’d often struggled to do so with prominent religious figures growing up.

Talking about how the journey of the book took place, Mir-Hosseini points out that the very nature of the book lent itself to these challenging questions. Where her previous book, which focuses on conversations with ulemas, took place at a time when she shared that she herself was in a position of learning and was unable to challenge the patriarchal status quo, she describes these six interviews as much more egalitarian conversations. While talking about why having these conversations in a more casual and accessible way was important she says, “I wanted to make the knowledge available. Every discipline has its own jargon and religious discourse is the worst, they speak in a language only for themselves.” As a book focused on somewhat demystifying the worlds of Islamic Fiqh (the process of deriving and interpreting Islamic law) and Shari’ah which are often made unreachable to everyday readers, Mir-Hosseini unpacks the legalities and technicalities of how gender impacts lived experiences, not just within Islam, but within Muslim societies. For me personally, the history of Islamic feminist movements and its roots was new information and one that helped me broaden my own understanding of the existence of different approach to Islamic feminism. “When people read it they come to appreciate a plurality of ideas and justice but at the same time see the problem in social structures and how it is difficult for women to acquire a voice.

Mir-Hosseini further shares “Once you know something you can never unknow it,”

The book is also deeply personal and both Mir-Hosseini and her interviewees are jumping out of the page, taking the reader on their own personal journeys in knowledge and understanding and most importantly, laying bare their own difficulties faced in this process of navigating the relationship between Islam and feminist movements and of sifting through generations worth of patriarchal interpretations of Islam. None of them claim any of this growth and discovery was easy, and to a young growing Muslim feminist, there’s some solace in knowing that I am not alone in my struggles and confusions either. Ziba and her interviewees lay forth a comforting message – that it’s okay to not have all the answers all the time as long as we’re doing what we can to improve our own actions, and fighting for more women’s voices in public religious spaces so that our needs and our rights are heard about and catered to.

It’s not to say there weren’t differences of opinions on the specifics – such as where Mir Hosseini differentiates between sharia which is Islamic law and fiqh which is Islamic jurisprudence, Abdullahi An Naim, her first interviewee for the book believes that the differentiation of the two is intellectual dishonesty. Yet despite such differences, Mir-Hosseini and all her interviews agree on two things – that ideas around gender and family are socially constructed and that family at the time of the Prophet Muhammad (pbuh) were very different to what they are now. As an expert on family law, Mir-Hosseini has focused a majority of her work on the ethics and technicalities of issues such as divorce and rights of women in the family in Islam and so the latter is particularly important to her work. By drawing the latter conclusion, these thinkers are pushing for a movement that they believe will return Muslim communities to its more egalitarian traditions set by the Prophet (pbuh)’s Sunnah – one they believe have been misinterpreted and politicised to benefit patriarchal institutions in the modern world over time. This book is a breath of fresh air because it acknowledges the diversity of opinions even within the same end goal.

A major common thread that all of the interviewees push for is their disagreement with the idea that the return to Islamic roots will be a patriarchal one because for them patriarchy in Islamic law is a result of one sided interpretations and power dynamics rather than Islamic systems and beliefs themselves.

It was this egalitarian nature of the inteviews, along with a sense of familiarity and trust between her and her interviewees that now allows the reader to feel their own understanding of Islamic feminism being challenged – because Mir-Hosseini herself says there is no one right answer. “ It [the conversation] was based on trust. We knew each other and we respected and trusted each other. I say in the conclusion [of the book] we have our differences, and those are important because we have got to be pluralistic. I leave the reader to make their own conclusion,” she says.

I am a recent graduate of the London School of Economics with a BA in History. I’ve been interested in writing for some years now and was the Editor in Chief of the London Globalist for the year 2019/2020. I also run my own online publication, Perspective Magazine, which focuses on intersectional feminism in South Asian society. IG: @anmolirfan22

What Karbala Taught Me About Collective Grief

By The Rogue Muslim