How to Make Treasured Golden Milk for Winter Nights 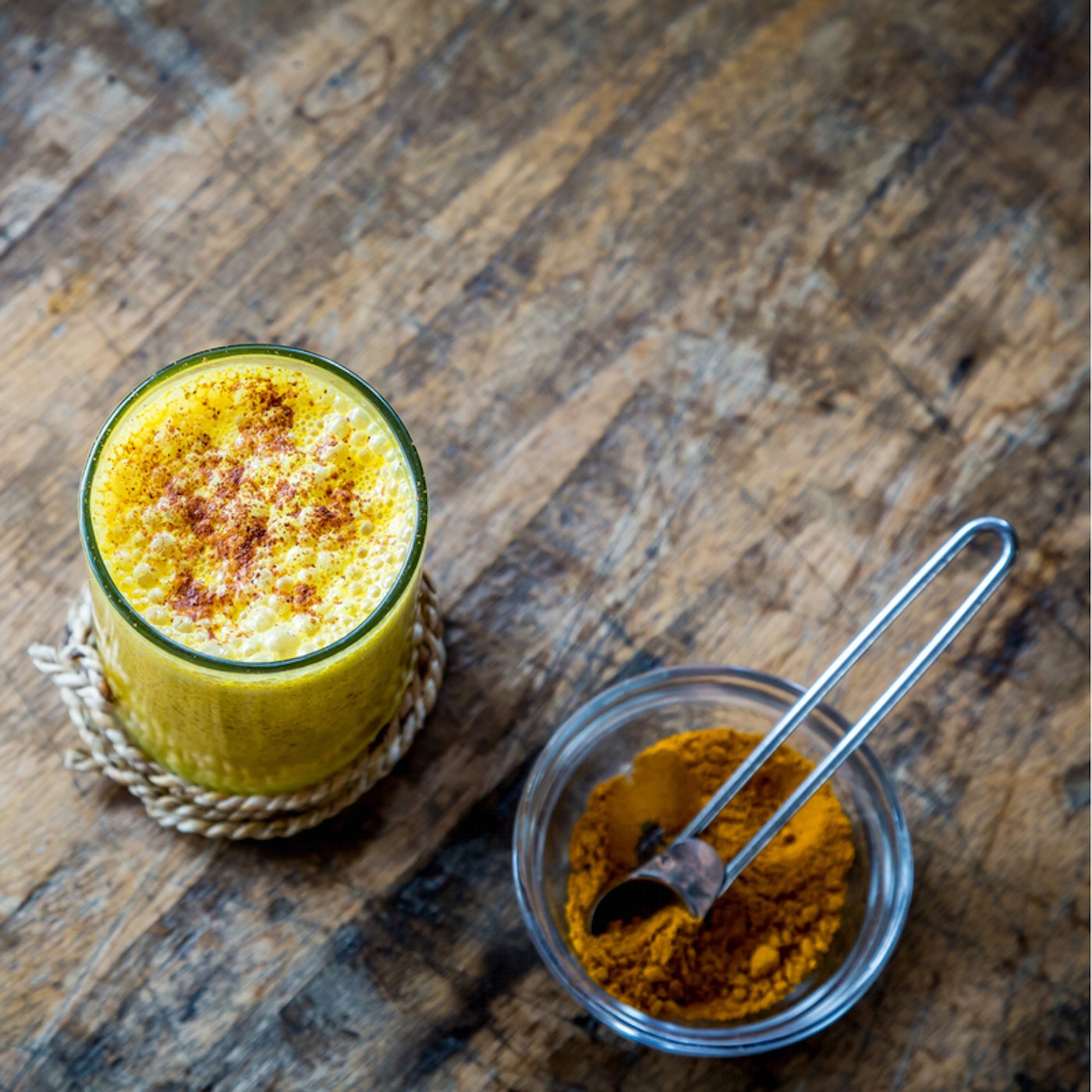 Golden milk It sounds like something from a description of paradise, or something Cleo Patra
would have indulged in, perhaps after having bathed in milk infused with rose petals.
However, in actual fact, if you have Eastern ancestors, the chances are that this poetically
named concoction is firmly rooted in your family’s culinary history. I know I’ve been
urgently instructed to make golden milk whenever I’ve been unwell, with anything from a
common cold to being more seriously ill, by both my mother and grandmother, but it was
only a month ago that I obliged. For the last couple of years, as so very often is the case on
the hipster scene, this traditional ‘old wives’ concept was swept into the limelight and
whipped up at cafes and restuarants all over the Western world. Cool kids and health
conscious folk alike began furiously sampling versions of golden milk, and the best part was,
it’s vibrant colour didn’t even need a filter to fit beautifully on an in Instagram feed.
It was only recently when I was struggling with my health, and feeing suffocated by the early
winter evenings that I finally decided to get the recipe from my mum.

In this age of fast food, exotic fruits from faraway lands in your shopping bag at the click of a
finger, and everything instant, all the way from coffee to gratification, the idea of stirring a
saucepan for 10 minutes simply to make myself a drink had always seemed a gargantuan
task. That was until I finally found the motivation to give it a go and the first sip of what felt
like warm silk slipped down my throat and soothed my entire inner and outer being. I
quickly realised that the ancient wisdom and wonder encompassed in this comforting elixir
goes far beyond the recently discovered and presently very trendy health benefits of
curcumin and coconut oil. There is much benefit to be found in the physical and spiritual
process of taking the time out and making the drink, with no microwave, no short cuts and
no toxic modern additions. 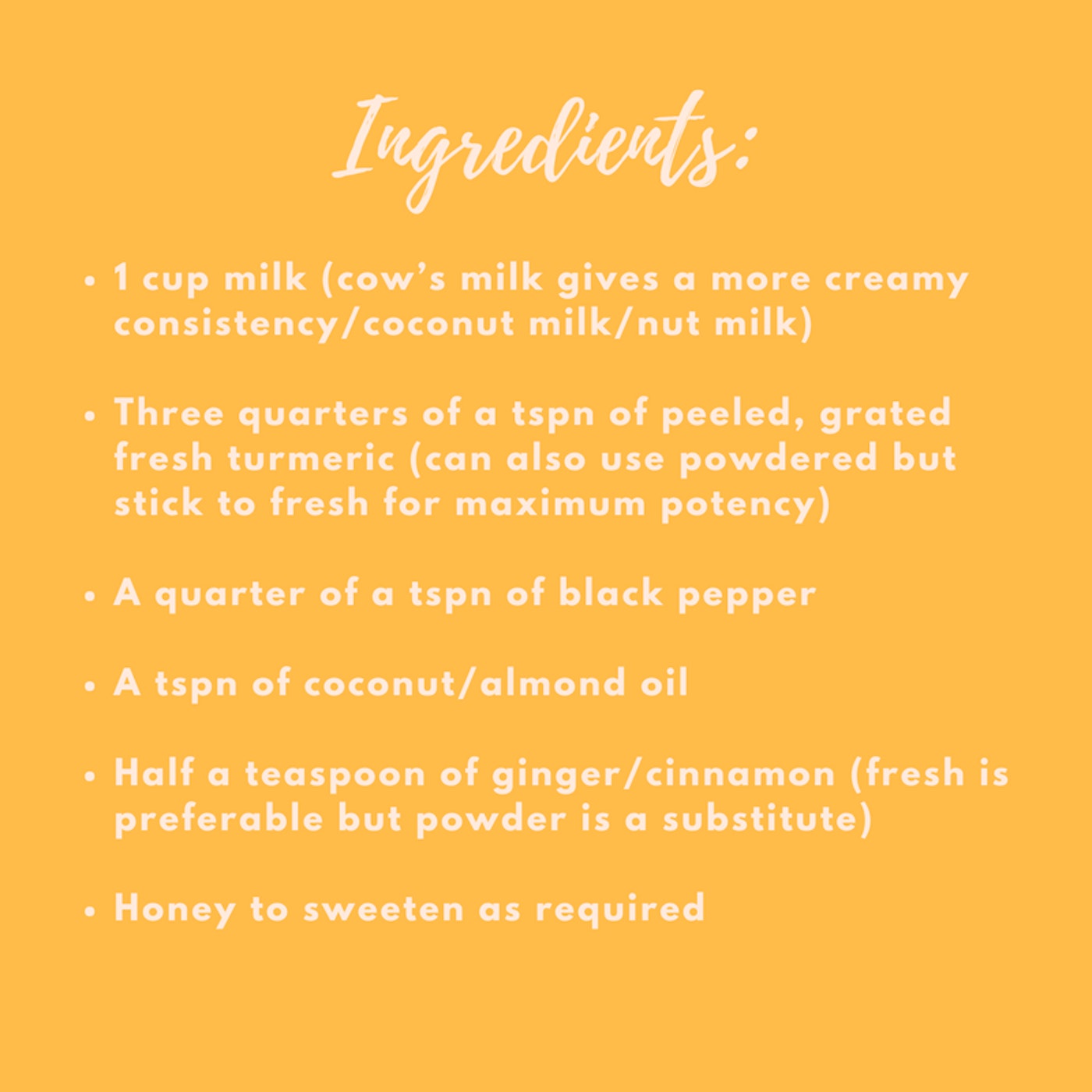 Firstly, Prepare the paste by gently heating the coconut oil in a pan with the pepper,
turmeric and ginger/cinnamon. Whisk until thoroughly heated but not burnt

Next, add the milk to the pan and stir well, bring to a simmer and sweeten with honey if
desired.

Serve in your favourite mug and savour every sip!

According to Ayurvedic and ancient Chinese medicine, the application of slow, infra red
energy/heat to a food (as opposed to nuking it in a microwave) truly imparts body balancing
warmth to it and preserves its life force and nutritional benefit. The herbs and spices found
in golden milk are known to be warming and promoting of essential vitality, particularly
beneficial in short dark winter months, or times of stress and illness. Alongside this, the
physical act of devoting precious time, thought and energy to preparing something to be
ingested is very powerful, calming, and good for the soul. Making something with care and
love, and even better than that, whilst making dhikr (remembrance of God), according to
Prophetic tradition bestows the food with endless benefit and goodness. I can bear witness
to the fact that this relatively simple drink, prepared in this (also relatively simple) manner,
is extremely potent and nurturing for mind, body and soul.

Brunch Ideas that will leave you wanting more

Golden milk gets its name and colour from the inclusion of turmeric, and is therefore known
on the Subcontinent as ‘Haldhi ka Doodh’, meaning ‘the milk of turmeric’. The active
ingredient within turmeric is curcumin, and medically speaking, over 150 potentially
therapeutic properties of the herb have been identified, including acting as a powerful
protector against cancer, healing for many diseases that are characterised by inflammation,
as well as being helpful for neurological and autoimmune conditions. Golden milk assists the
metabolism, eases menstrual pain with its antispasmodic properties, restores joint
lubrication and purifies the liver, amongst many other health benefits.

It is an incredibly comforting bedtime drink, as well as a wonderful pick me up when in need
of a little boost, or of healing. The creaminess of the milk and sweetness of the honey offset
the tart turmeric, while the pepper, cinnamon and ginger add a light spiced flavour. The
mindfulness and presence that is found in every step from the intention to nurture oneself,
to the pouring of the milk and witnessing the gradual deepening of the golden colour, all the
way to slowly sipping liquid warmth is something we all need in our crazy lives. All the way
from ancient India to Japan, where they enjoy an unsweetened version of the drink, people
have benefited from this drink for centuries. In this instance it certainly is true that ‘mother
knows best’. I urge you to introduce the treasure that is golden milk into your life.

We Answer 9 FAQ’s About the Vagina, From Discharge to Vaginal Dryness

3 Women Share Life in the NHS: Trials, Tribulations, and Tears