Beekeeping: Understanding the God Given Role of Being a Guardian of the Earth 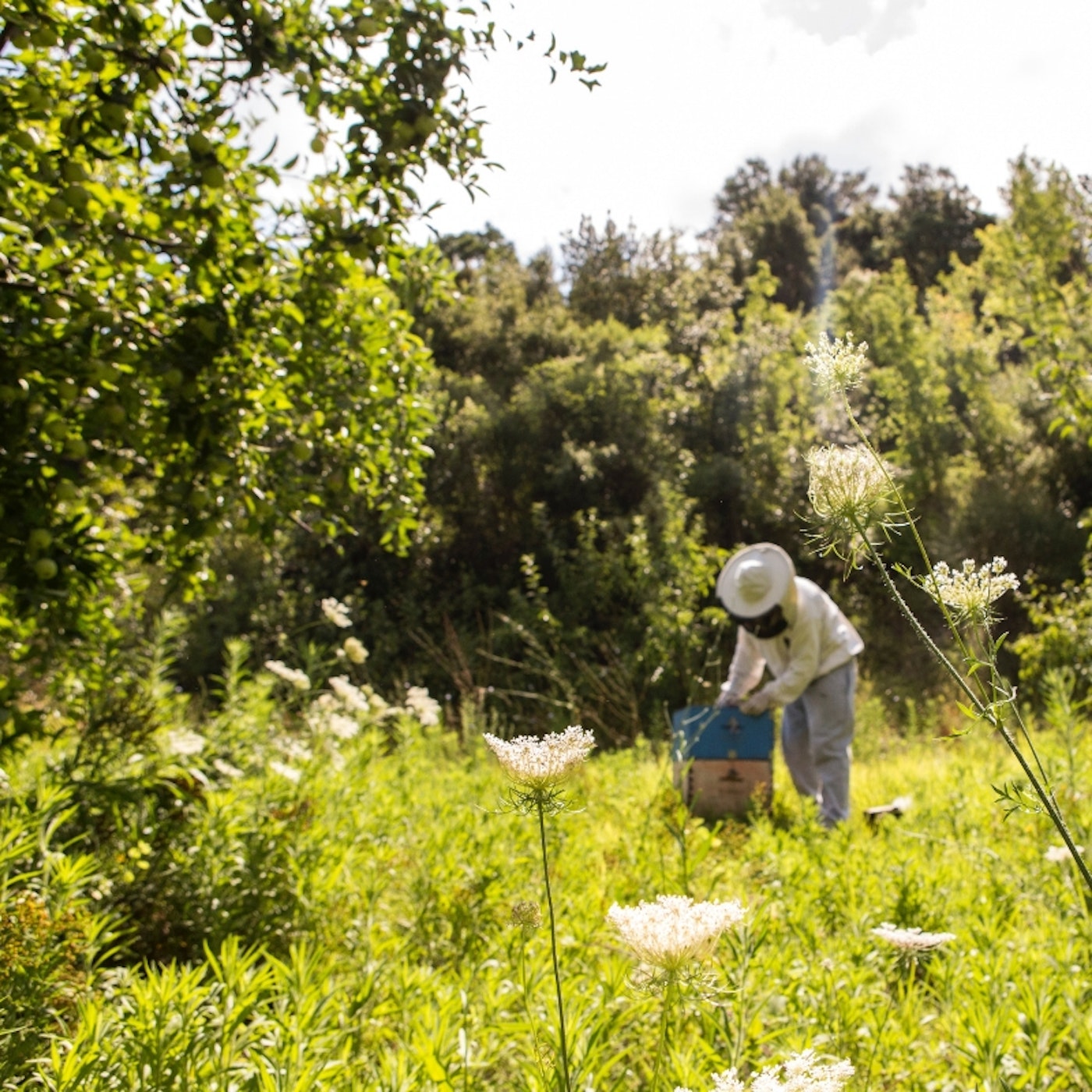 Early this year I decided to say yes to more things, so when my friend told me there was a weekend beekeeping course happening near where she worked in East London, I thought:

2. I’m curious, maybe I should ask if there was any spaces for me to join too.

From picking up a hammer and nails (for maybe the third time in my life) and building the hive ourselves, to donning white bee suits and learning how to inspect the activity of thousands of bees, I was in awe. I couldn’t believe how little I knew about this fascinating world. I’ve gained so much respect for this tiny creature that I used to be quite scared of. I opened the Quran and read Surah An Nahl with a newfound interest. I learned the hadith where we are encouraged to ‘be like the bee’. I’ve developed a fascination with this new hobby and come to realise that it is definitely a spiritual pursuit too, one where I’ve already learned the following lessons…

I’ve learned that a honey bee colony is a full-blown society that we could learn a lot from. From the insect world to every leaf, every sea creature, every rock on every mountain, it is all by Allah’s design. In the hive, what may look to the unobservant eye like chaos is perfectly organised. Every bee has a role to play.

The ‘nursing’ bees who feed young larvae, the bees that tend to the queen, feeding her royal jelly, the drones whose job is to mate with a queen and to regulate the temperature within a hive.

One of the things I’m most fascinated by is the worker bees who go out to forage for food as far as 3 miles, and then come back and communicate the best location for nectar to the other bees through the figure of 8 ‘waggle’ dance. Mind-blown was an understatement while I furiously took down notes in the first few weeks of the course. Then we moved on to introducing 2 colonies to our newly built wooden hives and inspecting the bees in action.

Look closer at the Quran and Sunnah

It is still hard for me to fathom the amazing process that bees use to make honey. The nectar from a range of flowers is stored in the bee’s stomach where it mixes with specific enzymes that turn it into a sugary substance that’s regurgitated into the cells. It’s then fanned by the bees wings and once the excess moisture has evaporated, we’re left with honey. To know that these insects are capable of all this and more, to know that God is aware and watchful of even ONE of those thousands of worker bees in one hive out of millions of hives, it reminds me of the true magnitude of Allah being All-Knowing. Thinking of this, the following verse becomes truly humbling:

‘And with Him are the keys of the unseen; none knows them except Him. And He knows what is on the land in the sea. Not a leaf falls but that He knows it. And no grain is there within the darknesses of the earth and no moist or dry thing but that it is written in a clear record’ – 6:59

In another chapter (An Nahl) Allah speaks directly about bees, telling us

‘there emerges from their bellies a drink, varying in colours, in which there is healing for people. Indeed in that is a sign for people who give thought’ (16:69)

After tasting the honey on those frames myself, directly from the bees to my finger, after experiencing the strong sweet floral scent and taste I realised that whatever we’ve been given from the Earth, not just for food but even the rivers and stars that Allah describes as guiding and navigating paths for people, is a true blessing and a gift.

‘And if you should count the favors of Allah, you could not enumerate them. Indeed Allah is Forgiving and Merciful’ -16:18.

#urbanbeekeepingdiary Week 4 – This week we were in awe at the way that bees pollinate!

In a hadith narrated by Imam Ahmad on the authority of Abdullah bin Amr, Prophet Muhammad pbuh highlighted the characteristics of a bee and likened it to a believer, saying

After researching and reflecting on this hadith, I realised the bees give us an amazing example of purity in actions. They look for the best sources of nectar, they convert that into something that benefits them later in their food stores but also in the case of the honey bee providing an excess that we can then consume and is a healing for us. When a bee lands on a flower it almost looks as though it’s hovering over it because despite their tiny size their weight if fully rested on the flower, would actually break it. It is almost as though the bee was created to be mindful. When I think of the lessons I’d take from the bee it would be to that I should be striving to eat well, to be mindful of the purity of the things I consume, and the things I put out into the world be it my words or actions. Lastly, I should learn from the gentleness and humility of the bee. Like the bee, I shouldn’t harm anything or anyone I come across and I should aim to give far more than I take.

Be a guardian of the earth: it is your responsibility

#urbanbeekeepingdiary Week 5 – This week we realised the main job of a beekeeper is to be perceptive! Thorough and regular colony inspections are important so we broke it down into some key things to look for • is the queen laying eggs? The eggs look like tiny almost transparent grains of rice and there should be one in each cell • has the colony got sufficient stores e.g. sugar water • are the bees collecting pollen? • a nice uniform capped brood (more on this later) • are there any queen cells? • is there enough room for expansion? • are there any warning signs of disease e.g. sunken caps, sticky gooey texture, no pollen. #beeconscious #colonyinspection

Growing up as a Muslim I’ve always been taught not to litter, to move things out of people’s path on the road, to treat animals with care, that if I show mercy towards Allah’s creation, I will receive Allah’s mercy. But now I feel more connected to the idea than I ever have before. Soon after I started beekeeping, I attended an event held my MADE NGO where the speaker’s words really stuck with me since, especially her mention of this hadith:

The Earth is green and beautiful, and Allah has appointed you as Stewards over it’ –Sahih Muslim

Being a steward, a guardian is a position of trust. Knowing that the number of bees has dramatically declined in recent years has made me think, what am I going to do about it? What am I going to do about global warming? The extinction of animals, the rise of pollution, the excessive waste of food and materials in today’s consumer society, the mistreatment of the Earth that we have been entrusted with. I’m learning that through small but environmentally conscious acts, I can better understand my role as a guardian.

Beekeeping inspections have encouraged me beyond the world of bees, to observe and look closely in order to notice the beauty in what we pass by every day. To remind me among the hustle and bustle of daily life that everything Allah created is in constant remembrance of Him, in ways we cannot understand. This lesson has simply taught me that you don’t need to be on holiday or out in the countryside to observe. You can be in the heart of the city but still take a moment every day to appreciate the signs of Allah all around us, like we’ve been instructed to do so in the Quran time and time again.

As I continue on my beekeeping journey, I know there are plenty more lessons to learn. For anyone reading, I would say stop and observe.

Follow our journey on Instagram where we document regular beekeeping updates and work towards our goal of one day owning and managing our own apiary!   @_beeconscious

Want to listen to Eman Yusuf read this beautiful piece herself?

Click to listen to Eman Yusuf reading her piece below, and click here to listen to the rest of our Amaliah Anthology series now…

Eman is an English Literature graduate and primary school teacher living in London who is passionate about education through real experiences, creativity and a growth mindset. When she isn't teaching, Eman is always keen to embark on new pursuits, whether it be wandering around a new city, learning a language (currently British Sign) or looking after bees! Her current favourite quote is 'there is no force equal to a woman determined to rise' by W.E.B Du Bois

Islam, Creativity, and Lights of the Quran: The Poets (Ash-Shu’ara – الشعراء)

Self-Love as a Form of Worship