Patriarchy in the Quran & Sunnah, Female Scholarship and Self-Love: In Conversation With the Salafi Feminist

by Ashiya Mendheria in Identity on 20th June, 2019 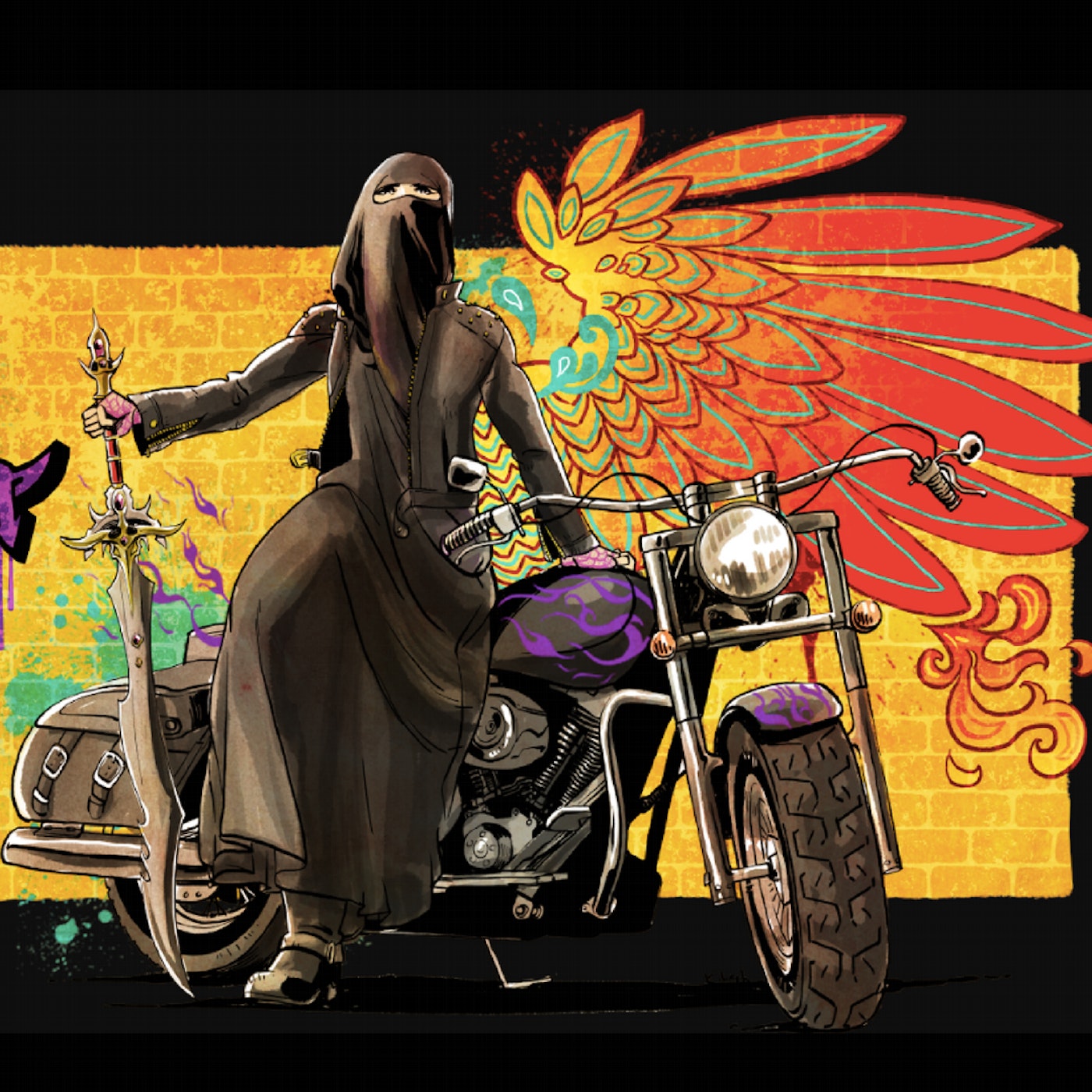 If there is anyone on social media that makes me think about my presence as a Muslim woman in this world, it is Zainab bint Younus – the fabled, unapologetic and witty, Salafi Feminist. Family planning, abortion, polygamy, Islamic sexual education, fatherhood, masculinity, gender roles, and the history of female scholarship are just some of the topics that Zainab regularly discusses. When I admitted I was fangirling and feeling nervous about this interview, she responded, “don’t worry, I’m sitting here in my pyjamas!”

My name is Zainab bint Younus. I go by the name The Salafi Feminist online; it’s not quite a pseudonym, but it’s become my pen name, in a way.I am a wife and mother, living a rather unconventional lifestyle.

1. How do you define feminism?

Many people have the misconception that taking on the label of, or identifying with feminism in any way, is rejecting Islam. It’s because I believe Islam is the perfect, most just and wholesome solution that I chose the name I did – the Salafi Feminist.

I am a feminist because I believe that women deserve better, that our ummah is plagued with numerous spiritual diseases that manifest in terrible ways, particularly with regards to how Muslim women are viewed and treated, both by religious teachers and the masses. Islam is perfect, Muslims aren’t. Feminism is what I use to describe my personal focus on a cause of advocating for women’s rights, and bringing about positive change for both men and women.

They neither destroy one's "virginity" nor do they somehow function as sex toys.

Every man who insists on issuing fatawah declaring that they are haraam… needs to shut up.

Bro is trash for asking for nudes but… you still want to talk to him? Why? JUST WHY. BLOCK HIM IN TWO SECONDS AND EXPOSE HIM FOR THE SCUM THAT HE IS.

In our Divine Revelation, the Queen of Sheba represents a woman's strength and her submission to Allah alone. She is a symbol to us, a role model, an example of a believing woman to be admired and emulated.

2. Is feminism based on secularism?

While popular feminism is quite secular, and there is a particular brand of White, secular liberal feminism that is most commonly referenced in the west, the fight for women’s rights is not in and of itself grounded in secularism. Rather women all around the world for generations upon generations, have called out the injustice that is perpetuated against women by society at large. One of my favourite quotes is ‘feminism is the radical idea that women are human beings’. We have so many incredible women in our global history, not just Islamic history, who’ve stepped out of the mould that was set for women; they never described themselves as feminists but they stood up for themselves and pursued their rights.

We have a basis in Islam itself to pursue justice and stop oppression. That doesn’t come from secularism: that comes just from being humans with brains, who are able to look around society and say, ‘this is wrong, the things that are happening to us, being done to us, the things that we do – that’s all wrong’. We don’t need to necessarily turn to an outside group or identity or society to recognise this and to address it wholeheartedly.

3. Why do some Muslim men feel agitated by the word feminism?

For most Muslim men, they feel threatened. They don’t like the idea that we are stepping outside the very narrow role that we’ve been given. They don’t want women to challenge the status quo which benefits them in so many ways. However, there are those who sincerely believe that there are problematic issues associated with secular feminism in particular and that we should be more careful of using such terminology. I can respect that difference, even if I don’t necessarily agree. For the most part, people just don’t like it when women refuse to do whatever we’re told to do without questioning.

4. What led you towards feminism?

I have always been aware of and critical of the hypocrisy, double standards and the messed up ways that Islam has been taught to women, and taught to men about women. But it was definitely a series of life events and realisations that pushed me to where I am today. There are certain attitudes so deeply ingrained, and many  Muslims choose to act in ways that harm or negatively impact women. Muslim women bare so many burdens, spiritually and emotionally. An example of this that is very personal to me is divorce. The concept of khula exists in the Shari’ah, whereby a woman can choose to divorce her husband and end the marriage by returning the mahr. It happened at the time of the Prophet (saw), and it is acknowledged in fiqh. Today, it is almost impossible for many women to get khula, even if they’re being abused, have been beaten black and blue, or are left starving. Why? Because in many communities, khula has been labelled as something bad.

Women who seek divorce are hit with this hadith: ‘a woman who seeks divorce for no reason will never smell the scent of paradise’. This hadith has its place in the Shari’ah, and it’s an appropriate warning just as divorce, in general, is disliked, but khula is also permissible; it exists in the Shari’ah for a reason.

As a result, women are trapped in horrific marriages, unhappy, unhealthy, toxic, abusive marriages. If we then try to get a divorce through the secular course, well now we’ve “rejected Islam”, now we’re “following our whims and desires”, we’re “going against the Shari’ah”. But we weren’t given our rights to begin with. And that has such a deep and lasting spiritual, emotional and psychological impact.

Long before I took on the label of feminist for myself, any time that I, or any other woman, would bring up the issues that we have in the Muslim community with regards to women, the knee-jerk reaction is ‘you’re just a feminist!’, ‘you’re just falling for secular feminism and you’re just trying to corrupt this ummah!’. So it doesn’t matter whether you take on the label of feminism or not, you’re always going to be attacked for trying to change things.

5. Does patriarchy exist in Islam?

I don’t deny that Islam in and of itself, does uphold a model of patriarchy, meaning that men are described in the Qur’an as qawwamun. The ameer of a community is a man, the imam of a community is meant to be a man but other than that, I absolutely do not believe that men should hold any kind of superiority over women or they should dominate any and all fields. Islam does recognise patriarchy and I believe this is something Allah has sent down for us; it is one of the greatest tests and challenges of life.

The way that patriarchy currently exists in our communities, where men are completely dominant, where men pull the reins, politically or religiously, as religious teachers and authorities, or within the family, where a man’s word is law regardless of whether he is right or wrong, or that he is viewed as a religious authority even if he absolutely isn’t, all of that is wrong and needs to change. That was never how the sahaba lived. Men are not automatically given this level of privilege and authority just because they’re men.

Women questioned them, competed with them, discussed and disagreed with them. I want to go back to a model that reflects the prophetic society, where there was respect and it was okay for people to disagree. It was okay for women to disagree with men, for women to hold certain sympathies and opinions that men didn’t, for a woman to be involved and active at a public societal level, whilst having a strong role within the household.

6. Do concepts like feminism, patriarchy, misogyny and so on, exist in the Qur’an and the sunnah?

These terminologies are obviously quite recent and they cannot be projected onto the Qur’an and the sunnah. The Qur’an and sunnah speak about justice; they provide us with a guidance of how we need to live our lives in the most holistic way. That includes justice in how men and women deal with each other, what our rights and responsibilities are as individuals and as members of family and society. The guidance is there to teach us how to work together in cooperation.

Racism, for example, is a useful term to describe certain mentalities, processes and viewings to be easily recognised. It is simply a function of language; it’s not used as tools of an agenda unless somebody actively tries to do so. There are words that exist for a reason, they have a definition that we should be aware of and there’s nothing wrong with using them appropriately. I am uncomfortable when people say the Qur’an is a feminist book or the prophet was a feminist. Feminism is always secondary to Islam. Islam is the primary model and feminism is a field from which I can develop certain ideas, as long as it doesn’t contradict Islam in any way.

How women in Islamic history lived, taught and functioned in society at large is so very different from how most of us have been raised to think of pious Muslim women. Rather than being silent and invisible, they were very much active in their communities.

Unfortunately, the names and stories of these women [in Islamic history] have for a very long time, been hidden away in abandoned books. Those who have been in the position of religious leadership and teaching did not and have not seen this as a priority to discuss these women publically. Nobody thought it was important enough for us to learn about them.

Certain areas were male-dominated because male authority was automatically taken as the default and more valid than female authority, and so the books that these women wrote disappeared. Their legacies faded away. We only know about them when they’re brought about as being important in relation to men. We don’t know about them because they were just that great, incredible and amazing on their own.

8. How do you practice self-care and self-love?

“Self-care” and “self-love” are terms that are unfortunately reduced to very shallow things like bubble baths, eating out or retail therapy. As a Muslim, self-care and self-love is so much more than that: it is about taking care of our spiritual and emotional well-being by turning to Allah, always.

Self-care is remembering that Allah is the Most Loving, the Most Forgiving; knowing that He loves us to repent to Him for our sins, and that He doesn’t expect us to be perfect, only that we try to seek His Pleasure however we can, and avoid His wrath.

Self-love is to hold oneself to the standard that Allah has set for us while being kind to ourselves and knowing that we can turn to our Lord for comfort, love, and forgiveness.This hadith  encompasses the idea of self-care for the soul: