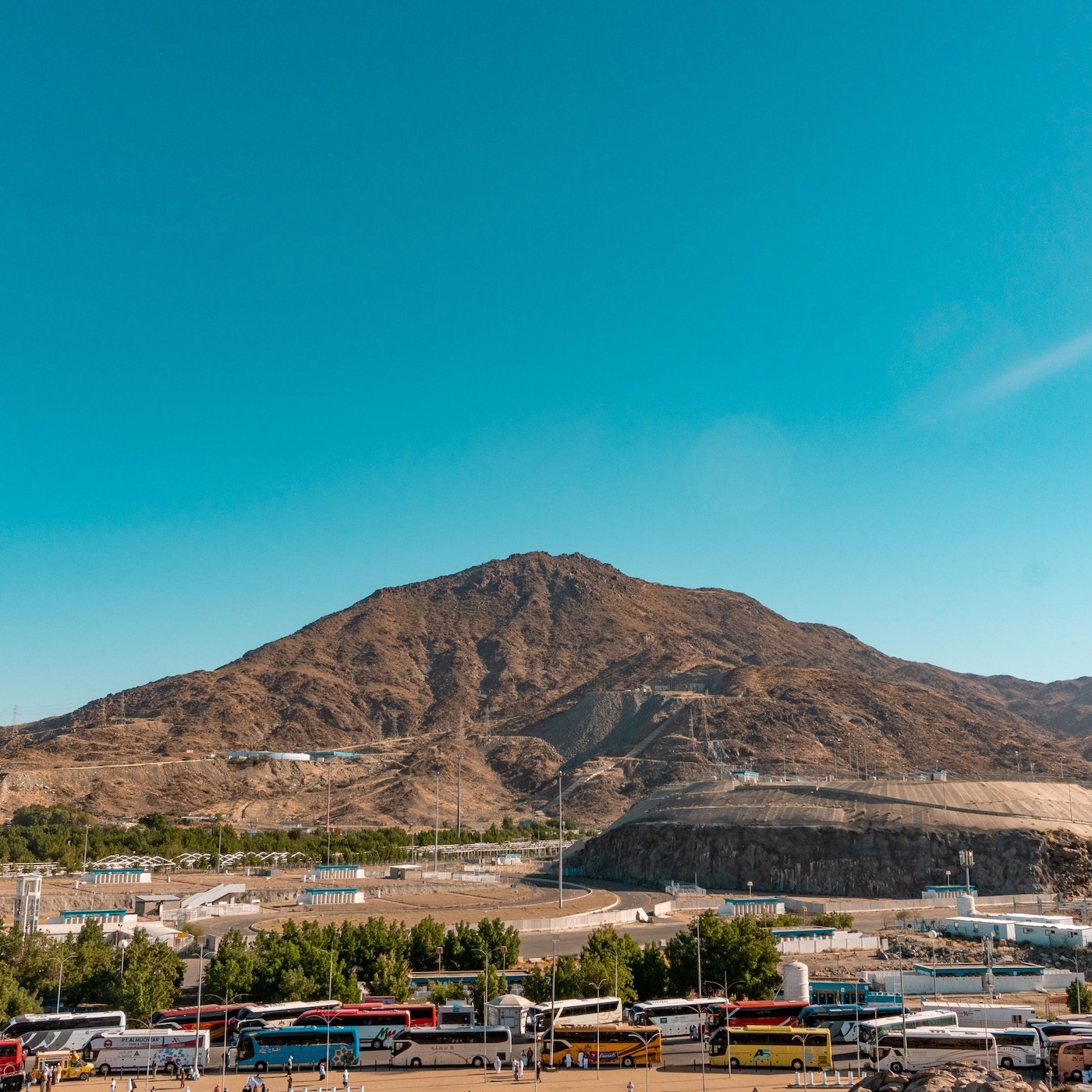 Yawmul ‘Arafah is considered the most important day of the entire Hajj pilgrimage.  In fact, the Prophet (saw) said: “Hajj is ‘Arafah” (Tirmidhi).  It is so important that if one misses ‘Arafah, their Hajj is not complete or valid. On this day all the pilgrims – woman, man, old, young, rich or poor, of every race, colour and nationality – journey to the desert plains of ‘Arafah. They begin the journey from Mina after the dawn prayers, and they remain until sunset.

The Talbiyah captures the purpose of the whole journey, to serve Allah and worship Him and Him alone. The day is spent praying and making du’a (supplication) to Allah – all the hujjaj (pilgrims) are gathered in one place, with the same goal, the entire plain is filled with worshippers dressed in their simple white cloth.  It is a day of deep reflection and connection with God.

Allah says in the Qur’an:“Then when you pour down from Arafaat, celebrate the praises of Allah at the Sacred Monument, and celebrate His praises as He has directed you, even though, before this, you went astray.”Surat al-Baqara 2:198

The verse shows that no one is exempt from God’s Mercy on this day – Allah’s forgiveness is for everyone who seeks it.  It is a profound and humbling experience for all those who witness ‘Arafah on Hajj.

Many connections with other events are made on this day.  The word ‘Arafah comes from the word ‘to know’, or to be introduced. It is the place where Adam (as) and Hawa’ (as) were reunited after being sent down from Jannah, and after they had repented to Allah.  It was thus the first ever meeting place on earth for any human.  Every year, people are gathered on ‘Arafah to repent to Allah, just as had been the case with our greatest grandparents.  “‘Arafah” also symbolises the fact Muslims seek to renew their relationship with God on this day.

Even more poignant is the fact that this is the place where all humanity will be gathered for the start of the Day of Judgment.  When the pilgrims stand before Allah on yawmul Arafah, they inevitably remember that the next time they return may well be on Yawmul Qiyamah, when there will no longer be an opportunity for tawbah.

There is no shade on the plains of ‘Arafah – these days there are some tents where people can shelter.  But when you speak to elders who went on Hajj decades ago, they will tell you how difficult it was back then.  They used to stand before Allah, seeking His Mercy, dishevelled in dust and in tears, under the burning heat of the desert sun. They report that it felt as if they were already experiencing Al-Qiyamah…the type of struggles pilgrims faced back then may have changed now. But the significance of ‘Arafah, the reconnection with Allah, has remained the same.The day is not only for those who go on pilgrimage – it is a special day for every Muslim, even if they are in the furthest part of the globe.

The Prophet (saw) said the following:

2.(For those not on Hajj): “Fasting on the day of ‘Arafah absolves the sins for two years: the previous year and the coming year” (Muslim)

3.”There is no day in which Allah saves more people from the fire than the Day of `Arafah.” (Muslim, Nasa’i, Ibn Majah)

4.”Anyone who has an atom’s weight of faith in their heart will be forgiven by Allah on this day, whether or not they actually stand at `Arafah.” (Abu Dawud)

We also remember that ‘Arafah is the day when Allah revealed the following verse: “Today, I have perfected your religion for you, and have completed My blessing upon you, and chosen Islam as Dīn (religion and a way of life) for you”. (Al Maidah: 3).

Just as Ramadan and its last 10 nights was honoured with the first revelation of Qur’an, so Dhul Hijjah and its first 10 days were honoured with the final ever revelation of Qur’an.  the Day of ‘Arafah was the last time Angel Jibril (as) came to earth as a messenger to the Prophets. ‘Arafah was also the day and place where our beloved Prophet (saw) delivered his farewell sermon, on his last ever Hajj, to crowds of hundreds and thousands of Muslims. It was a beautiful message, but also bittersweet, for it heralded the fact the Prophet (saw)’s remaining time on earth was short.

“O People, lend me an attentive ear, for I know not whether after this year, I shall ever be amongst you again. Therefore listen to what I am saying to you very carefully and take these words to those who could not be present here today” …

The Prophet’s farewell also acts as a reminder that none of us knows how long we still have on this earth. Just as all the hujjaj have to arrive at ‘Arafah before it is too late, we too have to make the most of this day before the sun sets – and make the most of our lives before it too slips away.

The Prophet (saw) ended his sermon by saying: All those who listen to me shall pass on my words to others and those to others again; and may the last ones understand my words better than those who listen to me directly. Be my witness, O Allah, that I have conveyed your message to your people”. May we live up to the hope and trust that the Prophet (saw) had in us. And may Allah accept everyone’s deeds and prayers on this day, from the hujjaj and from us. Ameen.

The Etiquettes of Making Dua: How to Get Your Prayers Answered