by Thursdays we wear black in Lifestyle on 25th July, 2019 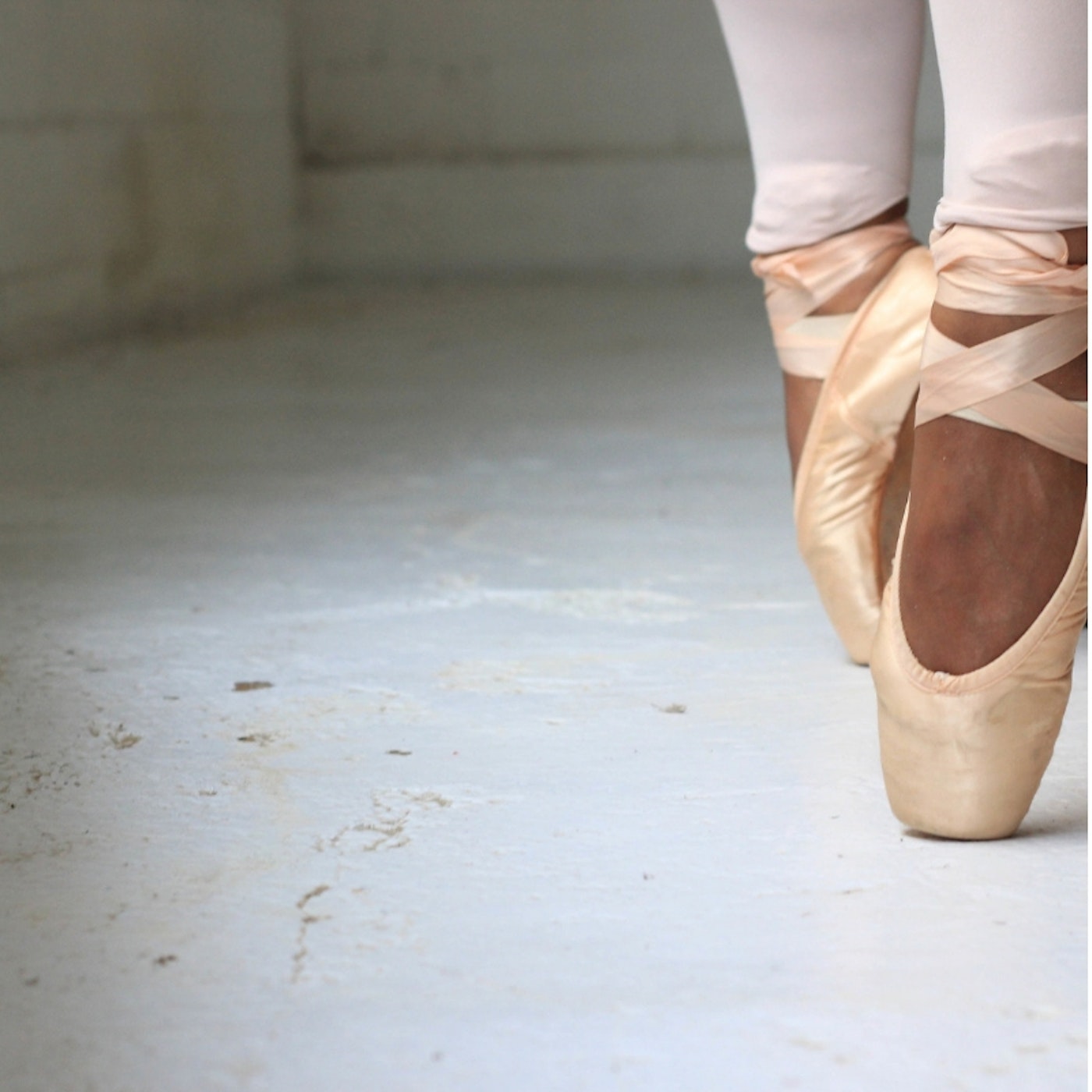 So it had been a month of attending ballet at the Royal Opera House, a place many of the greats had graced from within those same four walls, every single lesson more delicious than the last. Except for one thing, so often when I am about to enter a space in which I am reminded how visibly different I look, based on the group I am entering into, I have to mentally prepare myself that I will feel out of place. I will feel like I am a duck out of water, except now I m so incredibly used to it. So much so in fact, it doesn’t concern me as much as it exhilarates me, it acts as a platform to help propel me to stand out in a sea of faces. My hijab is my crown, and I imagine myself as a queen in swan lake.

So for the sake of this piece I have to explain a few things to you, some of the ballet dance moves you begin to learn in the first few weeks of attending classes. The phrases I may mention will potentially mystify you a little as they did me, so to prepare here is your mini micro version of a dance dictionary…

“Pied is a classical ballet term meaning “foot” with its plural from as pieds for “feet.”  Its a ballet term that is used with other terms to describe the main action of a dancer’s feet.  For example, cou-de-pied means “neck of the foot” and describes a dancer wrapping their foot, or pied, around the top”

“A plié is when a dancer is basically bending at the knees.  They are typically done in 1st, 2nd, 4th and 5th positions in classical ballet, both at the barre and centre in classes.  Correct use and development of a plié is a basic but essential movement to a dancer’s technique. Pliés are often seen before and after many more advanced steps.  They act as a sort of springboard for all jumps and are an important key for turns.  Additionally, a correct and functional plié is necessary for smooth transitions between movements.  Most importantly, a plié helps provide the proper cushioning when landing from jumps, keeping the dancer from becoming easily injured and able to dance very long ballets and dances.”

So class has begun and we start by perfecting our craft, we are told to move between 4th and 5th, to move our arms into an arabesque reach as the back of our legs kick behind us dramatically into the air. This all sounds so much more elegant and lovely than it actually looked, but it didn’t matter, I felt majestic, and since I have such long limbs, it was and is one of my favourite moves, I navigated it with ease, and it makes for such a nice stretch, it feels good.

Duck out of water

Not long after this the teacher instructs us to move into a plie, remember that? The one move where both of your feet are expected to be positioned wide facing away from the other, you are then instructed to bend down as far as you can reach with a straight back, your arm arched above you. It does not feel or look natural, well for me it didn’t. It kind of feels like you’re squatting when using the washroom in the Middle East, that’s the most elegant way I can articulate the feeling. I started to become incredibly self-conscious, unattractive even, and I’m not the type to get too wrapped up in feeling self-conscious based on my physical appearance. I looked at myself in the mirror at that moment and felt like I looked like a man, now as far as I’m concerned, and I can be honest with myself, my build just doesn’t really warrant that kind of description, but the only way to describe it since I scanned the room looking for someone who looked and felt as silly as me, and I was on my own. To the left and right of me as far as the eye could see, was a sea of long slender legs and arms, small feet, toned bodies. I was surrounded by little teacups, pint-sized prima ballerinas in pastel tutus. I suddenly became incredibly hyper-aware of the length of my feet,  my leg size, my height, my shape. Without divulging on my actual size and shape, on looking at me I would not warrant a description along with the lines of fat either, but in comparison to the other girls I felt my size was out of place. I also felt ungraceful, and long footed.

Perhaps this was one of those moments I had to prepare myself in feeling out of place, perhaps my half North African features  that I consider positive characteristics, were not placed in an environment that  allowed them to flourish, but more so retrained by the roots of Ballets colonial history, which then had travelled and journeyed to all parts of the globe and watered itself down, drip, drip, drip to appear less exclusive, each moment working toward this one, a dancer afraid to express her art due to the constraints of her body being the wrong kind of package to deliver it in. I did not match the criteria, my hair was not cascading, or even tied in a tight bun because I was covering it. All of my body was not to be admired by any spectator, to know me, you had to find some other way to place me.

I began to tell my colleagues here and there about how self-conscious I was feeling, before long, one of them had to take me to the side to ensure it did not develop into a sickness. I was never too worried about that since nothing could prevent me from my food. Nothing. I wasn’t about to develop an eating disorder, but I could see why those who have in the past. If ballet meant so much more to me, and it was a sport I enjoyed in the public space professionally, perhaps it would have gotten to me in a much more unhealthy way. I began to do my research, in 1997 the NY Times published a piece titled, “Eating Disorders Haunt Ballerinas,” to me, this sounded sinister. Two researchers went out to create a “survey of 40 beginning students at the School of American Ballet, affiliated with the New York City Ballet.” To see which girls developed or were predisposed to problems such as an eating disorder. The survey was dropped after a year due to the way in which, many ballerinas were dropping out as the questioning was getting them into trouble. Researchers were scratching a surface the establishments didn’t like. Many stories were emerging such as the sudden death of Heidi Guenther, a 22-year-old member of the Boston Ballet. Ms. Guenther had been described as having eating problems, she had complained to her family of a racing, pounding heart, but she refused to see a doctor. She was reported dead not long after this.

Eating disorders in the ballet wasn’t just a common occurrence it had become a niche business for some, ”Balanchine” is the name of an ideal body type of women who worked to pursue ballet, with jobs going to tall, slender women, with long legs, necks, arms, and a short torso. A minor industry of nutritionists and therapists specializing in dancers’ emotional and physical problems emerged, and it was clear it was not going away. In 2010, a dancer Charlotte Robbins had been reported dead due to anorexia, she shrunk to 3 stone. It seems based on research, the trend which has been difficult to break through has been the more slender the body the more they would receive advancement in jobs in Ballet, and weight gain can get you fired, Dance Magazine published in 2016.  Clearly, the 2014 multi wellness programmes introduced to help foster healthier associations to dance, and the many directors coming out to express how they were looking for different body types to put in major shows such as current National Ballet of Canada artistic director Karen Kain refuted the suggestion that her company is skinny-obsessed.

“I do not hire overly thin dancers or those with eating disorders,” she says. “The dancers of the NBoC are highly trained elite athletes who would never be able to perform every night after training and rehearsing during the day if they weren’t the most powerful and fit that they could be.These dancers have plenty of rippling muscles, which they would not have if they were overly thin.”

Dancer Magazine also reported the Royal Ballet director Kevin O’Hare said his company values, “individuality and stage presence over any set shape.“Being a dancer is not about denial but about strength and vigour,”. All this had been not enough to combat deeply entrenched social constructs.

It seemed my insecurities had a historical backdrop, I had been experiencing a light insight into the beauty standards of the world of Ballet. I wondered how sordid it could get, especially for women who fall into a more varied pool of genetics, what does it mean for the wider spectrum of the population?  I wondered how these women viewed themselves in the context of the ‘standard.’ How do researchers whittle down what any athlete dancer’s body naturally will begin to look like after a certain amount of training, versus what women felt pressured to aspire to and look like with a standardized shape of a woman being the benchmark?

Thursday is an undercover new ballet dancer breaking into the prestige high brow ballet world, learning ballet at the Royal Opera house in convent garden. Follow her hilarious but fascinating journey and perspective as your everyday hijabi Muslimah.

Hijabi Ballerina: Day One at the Royal Opera House

By Thursdays we wear black

#HalalDateNight: 7 Ideas to Keep You on Your Toes!

This Interior Designer Shares Her 5 Design Tips for Your Home

By Shahina Style and Form