by Khadijah Elshayyal in Lifestyle on 7th October, 2021 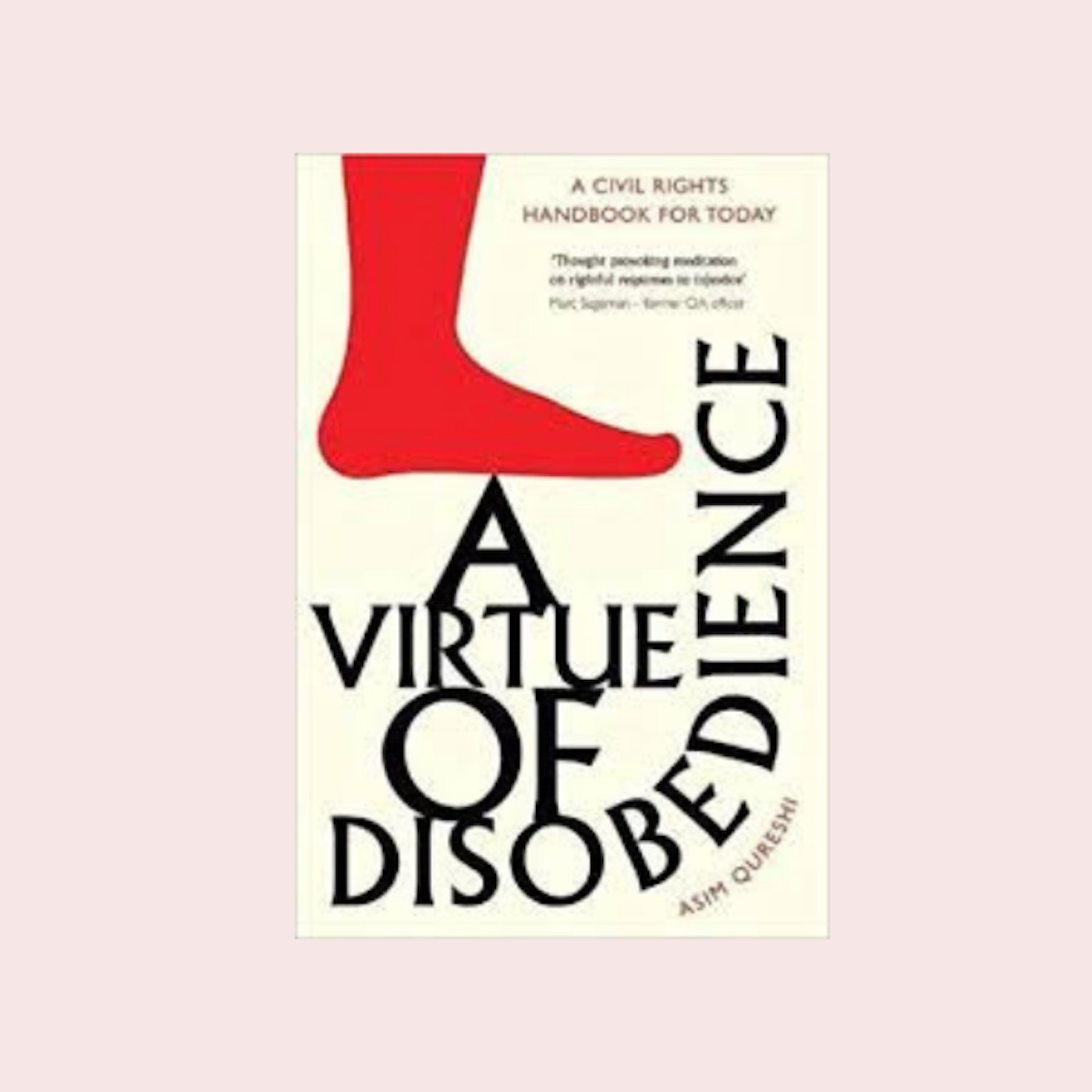 The increasingly polarised political climate in which we live is a source of constant anxiety for many of us. Muslims find themselves surrounded by a multitude of pressures and challenges, and at the center of these is dealing with racism in its many forms – including its structural as well as its everyday manifestations. From navigating life as a suspect community under the shadow of state securitisation, to disproportionately bearing the brunt of an austerity agenda, the impacts of which are getting harsher by the day – Muslim communities, and particularly young Muslims, are heavily burdened with these issues as they chart their personal journeys in life.

It is in this context that Asim Qureshi’s A Virtue of Disobedience has a unique and compelling contribution to make. Qureshi is a researcher with 15 years of experience in the legal field, campaigning for the rights of victims of the war on terror, and draws substantially on his field-experience in his writing.

A Virtue of Disobedience reads as a passionate exercise in contemplation. The author describes his very personal reasons for writing the book – stemming from his frustration with encountering religiously couched justifications for political quietism being preached from the minbar. We also learn that much of the book was written over the summer of 2017 – a summer seared into so many of our memories due to the loss, horror and trauma brought about by several successive terrorist incidents in London and Manchester, as well as the Grenfell Tower atrocity.

Qureshi’s work with the advocacy organisation, CAGE, means that for the unfamiliar reader, his reputation may well precede him – having borne the brunt of high-profile hostile personal attacks from the press and political establishment over the years. Qureshi discusses these experiences of deep hostility that he and his colleagues are regularly met with, and by inviting the reader into his reflections on religion and ethics, and how they inspire his politics and quest for justice, this book goes a long way towards demystifying the ‘enemy of the state’ image that mainstream media outlets and politicians have expended significant effort in portraying.

There is, of course, some irony in pointing this out, since Qureshi would no doubt argue that he shouldn’t need to demystify and humanise himself. Indeed, large sections of the book are devoted to explaining this very position – that there is now a routine expectation made of Muslims to ‘prove’ their own value and worth by fulfilling certain socially designated pre-requisites. Whether by performing extraordinary accomplishments before being afforded an ordinary level of acceptance or respect or by publicly condemning reprehensible atrocities and crimes that others have committed. However, in view of the post-truth era we currently inhabit, there is nonetheless an important point worth making in this: rather than allowing emotive tabloid headlines and political soundbites guide our perceptions, we could do worse than engage directly with the ideas of individuals themselves.

This book is informed by rich reflections on religious tradition, and the author’s immersive meditations on the history and literature of resistance and liberation in a range of contexts – most notably the struggles of Black Americans. Yet for all the richness of its content, this is not your typical heavy academic work. Rather, its strength comes from its earnest and highly personal tone. It invites the reader into the author’s thought processes as he ponders successive themes – oppression and injustice, witness, representation, and dissent and resistance.

I’m so pleased to announce that the trade edition of my book ‘A Virtue of Disobedience’ has been picked up by the amazing publishers @unbounders in conjunction with @bylinefestival. Please buy the book on preorder from the link in my profile. For those of you who bought the crowdfunded edition, then inshallah lots of new content in this one for you to engage with. I listened to a lot of the feedback from the first, and so look forward to hearing your thoughts on this one too. In the meantime, please watch and share this video of @thebrownhijabi who we commissioned to summarise the book in a poem she wrote for the start of the book, it’s pure 🔥. My endless thanks to Allah first and foremost to allow this opportunity, but also to my family, friends and @withcage family too. #avirtueofdisobedience #unbounders #bylinefestival #withcage #tradeedition #gettinginthebookshops #civildisobedience #justice #trauma #intergenerationaltrauma #heroes #survivors #faith

Though the book delves into political philosophy, it isn’t weighed down by complex theoretical arguments. Instead, it draws on the works of a diverse range of thinkers to develop a working approach towards interrogating power structures and their reach, and calling on the reader to consider their own positions vis a vis violence and injustice in all their forms.

Similarly, whilst there is a foregrounding of the author’s commitment to his faith in understanding and addressing the challenges that he is faced with, this is not a dense theological treatise. Qureshi’s thoughts are deeply embedded in religious tradition, particularly history and storytelling, as parables from the Qur’an and Sunnah are recounted and the author’s analysis of their lessons applied to contemporary dilemmas and challenges.

Early in the book, a discussion on the origins of oppression and specifically racism presents us with the character of Iblis as personifying their source (p.22). This simple yet powerful premise demonstrates how the arrogance that Iblis embodies has been a constant feature since the dawn of humanity – but also, crucially, that resistance to this arrogance and the oppression that it creates has also always existed, and that it will continue to. Thus, the tone is set for the rest of the book, where the reader is regularly prompted to consider ways in which their own personal decisions will place them in relation to this struggle between good and evil.

Complicity, collaboration, resistance and what the author describes as ‘virtuous disobedience’ are all notions which are unpacked and examined, all the while illustrated by examples from the past, by lessons from the Qur’an and Sunnah, and by contemporary events. The discussion on neoliberalism (p.42) resonated very strongly with me. Here, Qureshi talks about thinking of the privileges we enjoy alongside the notion of rizq, or provision. This connection encourages us to develop a sense of humility and groundedness in appreciating with a certain spiritual fullness what we may or may not have been blessed with. But equally, we are urged to be mindful of our consumption – not only what we consume, but the chain of production behind our consumption, those people impacted by it, not to mention our planet and everything in it. This response to neoliberalism and its obsession with production, consumption and economic growth at the expense of all else is perhaps not so unique for its holistic approach, as much as it is distinguished by its spiritual underpinning, which informs and substantially enriches the author’s critique of neoliberalism.

So, I highlight this discussion not only for its merits as a very pertinent discussion of pressing and urgent issues. I also highlight it here because it demonstrates effectively to us that the binary which both Muslim commentators and those from a secular standpoint are often so keen to perpetuate – that of either addressing today’s challenges through a prism of faith, or a secular one – does not have to be so. Often the two approaches are offered separately: on one hand, we are presented with a ‘secular’ model of anti-racism, and on the other, a religiously-inspired response that is at pains to discredit ‘secular’ answers as ‘godless’ and lacking. The ease with which Qureshi develops his analysis of neoliberalism and its devastating impacts by drawing on lessons from the Qur’anic story of the Prophet Shu’ayb alongside the works of Michael Neu and Eduardo Galeano shows us that such insistence upon this binary is vacuous and can only constrain the possibilities available to those engaged in collaborative resistance to systems of oppression.

But more than a work of analysis and contemplation, this book is also a call to action. Qureshi suggests to the reader ways to think about the extent to which we might be complicit with the oppressive structures around us. He also offers tentative ways to think about how and where we might be able to draw distinctions between actions of positive engagement or even influence, and what can potentially constitute collaboration with oppression or injustice.

If I were to make any criticism of this book, it would be of Qureshi’s rather extensive use of lengthy direct quotes in his writing – these are brilliant for indicating the breadth of inspirations behind the author’s line of thinking, but they can interrupt the book’s flow somewhat. But this does not take away from the fact that there is a great deal to recommend it. Reflective and promoting reflection in equal measures, it is a welcome intervention during these times of uncertainty and entrenchment of positions and views. If it receives the exposure and engagement that it deserves, A Virtue of Disobedience will enrich conversations firstly within Muslim communities, but also among anyone who is serious about understanding the impact of oppressive power structures on our communities and ethically-centred approaches in the pursuit of justice.

An updated version of the book is available here from Unbound

Khadijah Elshayyal is a specialist on Muslims in Britain at SOAS and the University of Edinburgh. She is the author of Muslim Identity Politics: Islam, activism and equality in Britain, and Scottish Muslims in Numbers: understanding Scotland’s Muslims through the 2011 Census. Follow her on Twitter: @DrKElshayyal