by Selina Bakkar in Fashion on 7th September, 2016 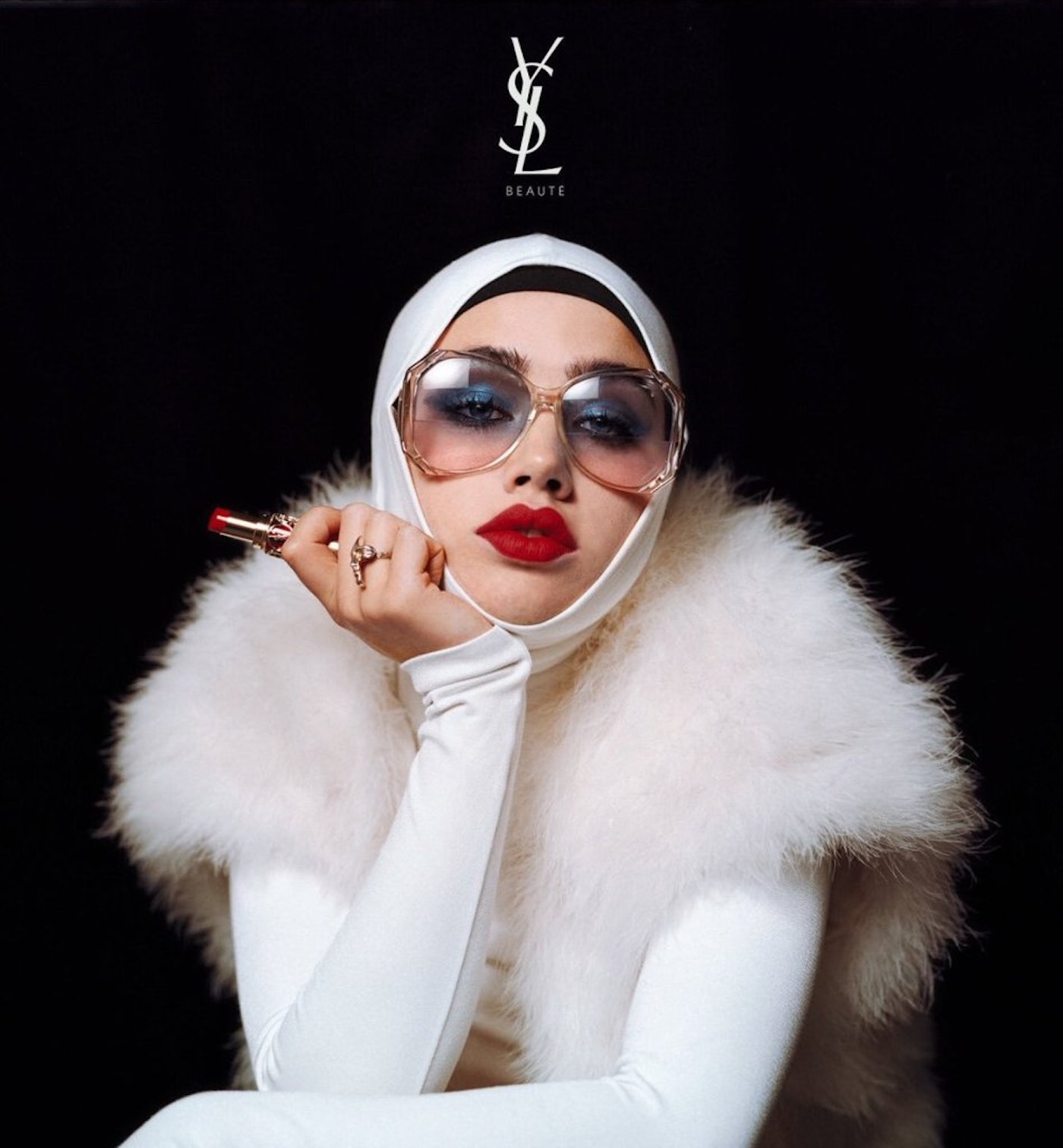 What do we really think about YSL featuring a hijab in their campaign?

Modest fashion has been booming in the last few years and we’ve loved every minute of it. Modest clothing can be high-end, elegant and gorgeous or High street. Huge fashion names such as Dolce and Gabbana, Oscar de la Renta, Tommy Hilfiger, Mango and more are proving this with collections specifically aimed at Muslim women. H&M featured Muslim model Mariah Idrissi in a recent campaign and L’Oreal’s latest foundation campaign featured Youtuber Amena who wears a hijab.

More and more retailers are striving to connect with Muslim women through fashion. At a time where Muslim women’s bodies and how they choose to dress them are the object of world wide debate, we welcome the inclusive message from western fashion houses.

As fashion lovers and beauty addicts we were excited to hear about the YSL campaign and where we see ‘YSL beaute’ campaign featuring a model wearing a hijab. Dressed all in white, with a fur throw slung round her shoulders and oversized 70’s shades the photo is undeniably glamorous, modest, nonchalant and cool.

We were disappointed to discover, however, that the model for the campaign, Isamaya French, is a non-Muslims. There is no doubt about her beauty, she is stunning. Furthermore, she’s a step away from the beauty industry typical standards. She’s unconventional and we welcome that, the photo’s of her YSL campaign are work’s of art within themselves. However, a Muslim hijab-wearing woman rocking that white hijab fur and red lipstick would have been revolutionary.

We’ve seen the community convey disappointment via social media when they discovered this and whilst we respect YSL for trying to be inclusive, we can’t help but feel disappointed too. We’ve seen the excitement in comparison to other campaigns tail off quicker and the euphoria was short lived when everyone realised the model was not Muslim. A non-Muslim wearing a hijab doesn’t represent us or what the hijab means. It’s almost impossible for a non-hijab wearing Muslim to understand the nature and journey of the hijab. Nor could they ever understand what it means to wear it or the appreciation of the struggles we have faced, on occasion from wearing it. That’s okay. That’s not to say that non-Muslim women and men aren’t supportive of our choice. But it does seem to be a problem with brands like YSL. It feels like a marketing campaign with no understanding of Muslim women or the market they are trying to tap into. The hijab isn’t just a head covering, which is what this campaign implies it is. The hijab means different things to every woman that chooses to wear it. It means empowerment. It represents choice. It signifies modesty. It’s fashion. It’s an expression to the world and above.

this isn’t even a hijabi, ysl have made it seem like muslim girls don’t have the potential to model as themselves https://t.co/97HayxzFVo

Everyone getting hyped over the ‘hijabi Ysl’ campaign. Isamaya Ffrench (featured) isnt Muslim & doesnt observe hijab. Its not revolutionary

just found out that the model for ysl is white and NOT muslim, she’s beautiful but so are our muslim girls who look amazing in their hijab

YSL has always had a somewhat controversial attitude towards the Muslim world. We were upset earlier this year when Pierre Bergé, who was Yves Saint Laurent’s business and life partner, lashed out at designers who create Islamic clothing and headscarves, accusing them of taking part in the “enslavement of women”.

“creators should have nothing to do with Islamic fashion. Designers are there to make women more beautiful, to give them their freedom, not to collaborate with this dictatorship which imposes this abominable thing by which we hide women and make them live a hidden life.”

Whilst we appreciate this isn’t the view of many of those that work at YSL. Comments like these are a sad day to day reality for many Muslim women. These negative, reductionist headlines about Muslim ‘oppression’ are all too common. It would have meant so much more on the basis of these remarks, if YSL shattered glass ceilings by having a Muslim model in their campaign. This is what would really shift it from seeming like corporate opportunism to genuinely being about women’s empowerment. Having a stunning Muslim model reframes the debate about Islam. Appreciating a Muslim woman’s beauty enables Muslim life and culture to be discussed in diverse, healthy and holistic ways.

U know what i don’t get. This year the co founder of YSL said some pretty islamophobic shit about muslim women soo.. https://t.co/ckS7bk43Uv

“We must teach (Muslim) women to revolt, to take their clothes off” – Former YSL co-founder on YSL hijabi ad. pic.twitter.com/umwC8vgvtv

@YSL‘s Pierre Bergé says designers who are creating Muslim-minded wear are “collaborating with a dictatorship” https://t.co/5KQXSY4krh

Empowerment for us, for Muslim women women is more important than ever. Seeing a huge fashion brand with a Muslim model, such as H&M, is affirmation that Muslim women matter. It’s a message that speaks volumes. That your choices are catered for and respected. It’s acknowledgment

It’s a message that speaks volumes. That your choices are catered for and respected. It’s acknowledgment  that your style is as important as everyone else’s.

On a more fundamental level it’s about visibility. Featuring Muslim women in stunning, creative campaigns is a move that refuses to buy into the current political discourse. It’s perception shifting. The more  fabulous hijabi wearing sisters we have in the public eye, the more empowered young muslim  girl’s feel. Fashion for all means it becomes less about ‘them’ and more about ‘us’.

It’s embracing our diverse, multi-faceted and thriving society. All women are beautiful. Inclusive fashion and beauty campaigns tell Muslim women they are too. The success of L’Oreals #truematch campaign shows the world that beautiful, Muslim models are appreciated the world over. We hope more brands follow suit.

This was co-authored by Hannah Lloyd Thomas and Selina Bakkar.